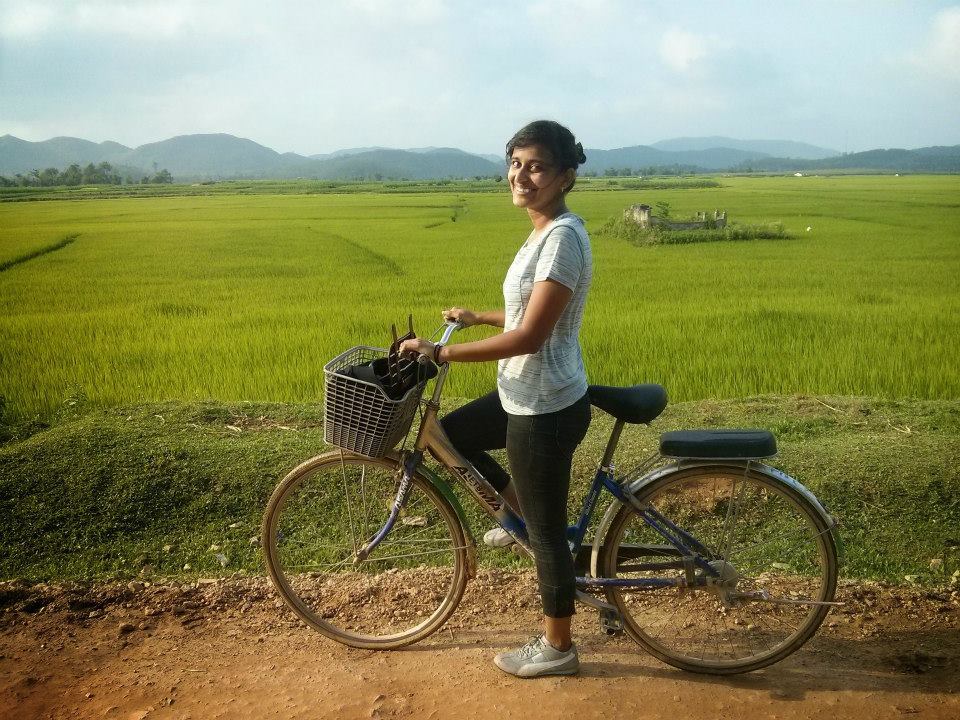 A Glimpse of Vietnam

Gracefully resting by the South East Asian coastline, Vietnam is a rhythmic blend of history, culture, modernisation and nature. Filled with visual dramatics right from the rustic living in Mekong delta, the magnificent caves system of Phong Nha, the marvellous French architecture at Hanoi, life in the valley of Sapa to the breath-taking Halong bay.

Vietnam became independent of Imperial of China in AD 938 and continued to flourish till the French colonisation in the mid-19th century. Although after the first Indochina war Vietnam was freed, yet divided into two rival states of- North and South Vietnam- with the US intervention adding to the political unrest followed the Vietnam War. It was devastating and one can see the aftermath of the horrid war even now. The country sure was destitute but not destroyed, Vietnam leaped with all its might.

Besides the many grand UNESCO world heritage sites the country also houses some dazzling Pagodas like the – Temple of Literature, Jade Emperor Pagoda, One Pillar Temple, Perfume Pagoda and so many more- All of them offer the same peaceful aura yet distinct history and rituals. I can go on writing about the alluring architecture and the natural beauty of Vietnam, but that should not overshadow everything else the country has to offer because in the right sense it is a complete sensory delight.

Must Visit Cities in Vietnam

Ho Chi Minh City or Saigon is the largest city in Vietnam. If you are visiting Vietnam you just cannot skip Saigon, for you get to see the harmony in the confusion. I encountered the high spirited living in District 1, the laid back lives and open spaces in District 7 and came face to face with Vietnamese culture in the District 5. Where to stay:I stayed in the Backpackers area in District 1, the place is chaotic and filled with tourists. The good part is that this is in the heart of the city so you can simply walk to the major places of interest. A dorm room would cost you around $ 7- $ 10 and a private room can cost anywhere between $ 10- $ 20. Pham Ngu Lao Street is a hub for hostels, with a new hostel coming up every month! It is the main street in the district, however the hostels are located in some extremely narrow alleys. Since all of these hostels promise same amenities and services you might have a hard time picking one out of the lot.

Before finalising a place to travel there is something that draws you to the destination, Phong Nha Ke Bang was that attraction for me. I stumbled upon a picture of one of the majestic caves of Phong Nha and, for the lack of words, it took my heart away.The first known writing about the cave system was somewhere in 1550 followed by a number of exploration by Vietnamese as well as foreign explorers. However, this pristine untouched forest and the purest limestone massive was given UNESCO world heritage status in the year 2003. It came to me as a shock that the place was opened to tourism only a few years back.

There are times when a whole experience can be expressed in just one word, a sudden trip to Cat Ba Island- the largest Island in Ha long bay. Cat Ba is one of the major weekend getaway for the locals and is often overlooked by the tourists who plan to go on a day trip to Ha long Bay. Another reason could be the exuberant high rates of the tour operators which range anywhere from USD 200-400, believe me you can do a 2 night 3 day trip to this beautiful island in under USD 60. The day I arrived at Hanoi I had 7 days to go with absolutely no plan, a number of backpackers I met till now suggested going to Sapa and Ha long bay one can easily spend 2 nights at both these places. After 2 days exploring the city me and two other backpackers (who I met in Phong Nha) decided to go to Cat Ba Island; on our own. And it sure was worth a visit.

Reaching the Island: Reaching Cat Ba requires changing the modes of transport a couple of times and there are 2 major routes by which one can reach Cat Ba from Hanoi- via Ha long city, via Haiphong - but you have to be very sure of the timings of all the modes of transport that you would require because the last thing you would want to do on a vacation is wait until the next day to get on the connecting transport. Hence, the easiest and the most convenient way is to simply purchase a ticket (220000 VND) from Luong Yen bus station (Hanoi) this include a bus ride till Haiphong city (approx. 3 hours) another transfer till the port (approx. 1 hour) ferry till the island (45 minutes) and the final bus till the harbour (45 minutes)

Where to stay: The largely untouched scenery of the island was swarmed by a number hotels in the recent past, leaving you with lots of options to choose from. After arriving at the harbour we sat down at a café (with WiFi) to look for a place to stay, the whole stretch of the harbour is covered with hotels apart from the many hotels on the island otherwise. They are easy to locate on any of the hotel booking platforms otherwise you can simply walk around and pick your stay. A budget room for a night on double occupancy can cost you anywhere between USD 6 – USD 10, we stayed at the Cat Ba Backpackers Hostel – 3 people in a room for USD 3/person. For a mid-ranged stay you can find options between USD 15- USD 40, if you have no budget constraints then you can choose from a beach resort in USD 50 to a private junk in about USD 400. There are cheaper junks too, but be ready to have some unwanted guests (read rodents and bugs) along with you and bad services.

What to Eat in Vietnam

Amidst the blend of culture, Vietnam has been able to preserve its culinary delicacies. It is quite possible to find the same dishes in a high end restaurant and a street side stall, but I guess the simplicity and the subtle flavour is what makes Vietnamese cuisine one of its kind. Offering an array of tropical fruits and vegetables, what took my heart away was the utter freshness of these ingredients. Right from the basic Pho (noodle soup) and Banh Mi (Baguette stuffed with meat and vegetables), the rice paper rolls and hot pot to the Bia hoi (beer culture) and the traditional coffee there is so much to taste and relish. Known for its meaty delicacies otherwise, now has seen a number of vegetarian joints cropping up. (Read more on being a Vegetarian in Vietnam). To further subside your love for gastronomy sign up for one of the many culinary courses running in Vietnam.

Top Things to Do in Vietnam

Best way to know more about the history of a country is to hear the stories from a war veteran, but if you do not get a chance to speak to one don’t be disheartened. Vietnam is dotted with Museums and sites of historic importance and a quick visit to them will take you back in time. The Cu Chi Tunnels in Saigon showcases the Viet Cong method of warfare and is very interesting to know how they survived during the American War, The War Museum offer could be your one stop solution to know the facts of the war it has neat display of weaponry used during that time. Another interesting Museum is the Women’s Museum in Hanoi which features excerpt of influential women in history and also how the role of a women has changed over time.

The big cities of Vietnam offers a high octane living, even the utterly chaotic traffic starts growing on you after a couple of days. There are a number of scams brimming in here but that should not hinder your desire to explore this varied country. The locals are warm and friendly, largely in the countryside, eager to know more about you or to just say hi. The diverse culture will be a shock to you at first but before you know it this wonderful country will welcome you in its rhythm and you will be swaying in the power packed life of Vietnam.

1. Visit the War remnant museum to get the insights of the war with both French and Americans. The museum displays exhibition rooms on history, statistics and the weaponry used during the war. You will be forced to think how in a short span of time this country has recovered from the horrors of the war. One can easily spend about 2 hours at the museum, is worth the entrance fee of 30000 d.

2. Gaze at the marvellous architectures of the Notre Dame Cathedral and Central Post Office. Built by Gustave Eiffel of the Eiffel tower fame, Saigon’s Central Post Office is one of the most acclaimed buildings of the country. Once you enter you are greeted by groups of other tourist praising the Gothic style architecture, French colonial maps and a portrait of Ho Chi Minh. Right across the post office stands the Notre Dame Cathedral basking the beauty of Romanesque architecture, apart from the usual tourist buses I was lucky enough to spot a number of newlyweds having a photo shoot outside the Cathedral.

3. A visit to the Mekong delta and the surrounding Islands is a must when in Saigon. There are a number of tour companies that take you to see places around Mekong Delta, you can take a day tour or a 1 night 2 days tour. The day tours range $ 10 - $ 15 and includes transport, English speaking guide and authentic Vietnamese meal.

I recommend watching the floating market of Cai Be then taste some snake wine and visit the fruit market of Vin Long to indulge in the tropical treasure of the country.

4. Crawl through the Cu Chi tunnels, you can either book a tour or just take a city bus by yourself. It is located a bit on the outskirts of Saigon, these tunnels showcases the Viet Cong method of warfare and is very interesting to know how they survived during the American War. You can avoid the tour under the tunnels if you are claustrophobic.

5. Shopping can be a task in Saigon if you have not mastered the art of bargaining, chances are you will be a pro at it by the end of the shopping trip! There are a number of markets to choose- Ben Than being the most visited by the tourists, probably because of the close proximity from the backpackers area is a nice place to shop for souvenirs, eat Vietnamese street food and hone your haggling skills. If you want to escape the heat, you can visit the nigh market. Word of caution: Be careful with your belongings, the streets are filled with pickpockets.

6. Get carried away in the crazy Nightlife of Ho Chi Minh City, I would simply compare it to the Baga Beach area in Goa or the Khao San road of Bangkok. A number of Karaoke bars, uptown clubs or just bar the streets are filled with options.

7. Sip an Iced Coffee and watch the chaotic life of the city go by. This sure was one my favourite things to do during early evenings, the Vietnamese coffee took my heart away and was a sure way to battle the heat and humidity. More on the coffee culture of Vietnam will come in the next post.  Those are just some of the things that I did during my 5 day stay in Saigon. There is so much one can see and explore in this high octane city and if not then just take book and sip some addictive Vietnamese Coffee.