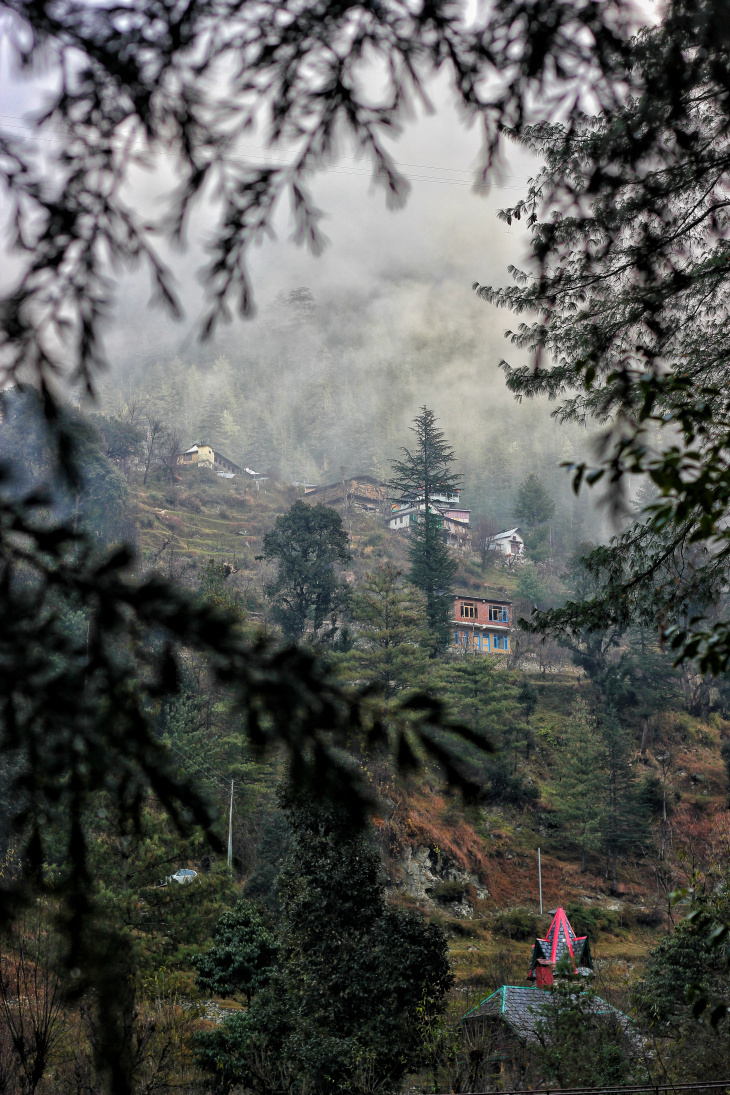 (Not) Doing the homework

Last December, me and my friend Eeshan went on the search of snow. We zeroed in on Jibhi, a quaint village on the periphery of the Great Himalayan National Park. We had a couple of days, bus tickets to Aut, no hotel bookings, a few places such as Jalori pass in our minds but our plans were vague at best. This was unchartered territory for me. I tend to plan my trips to the minute details. But this time around, I only had a very rough sketch. In a way it was liberating and like we found out later, we can't plan for the mountains, the weather, and the snow anyway.

A less than perfect start

On the first day, a cloudy gloomy day in the middle of December, we landed at a small town called Aut, on the Chandigarh to Shimla highway following an overnight bus journey. The less I say about that bus journey, the better. It involved major issues- I lost my tripod during a midnight bus change, the place where the bus halted for dinner was ridiculously expensive (especially when you are on a shoestring budget anyway), and the bus was not the most comfortable and definitely was at least 3 hours late even if you make allowances for the mountainous roads. But I was not going to let it ruin my mood and I let the saga of losing my tripod slip into the back of my mind.

Sunrise on the Beas River 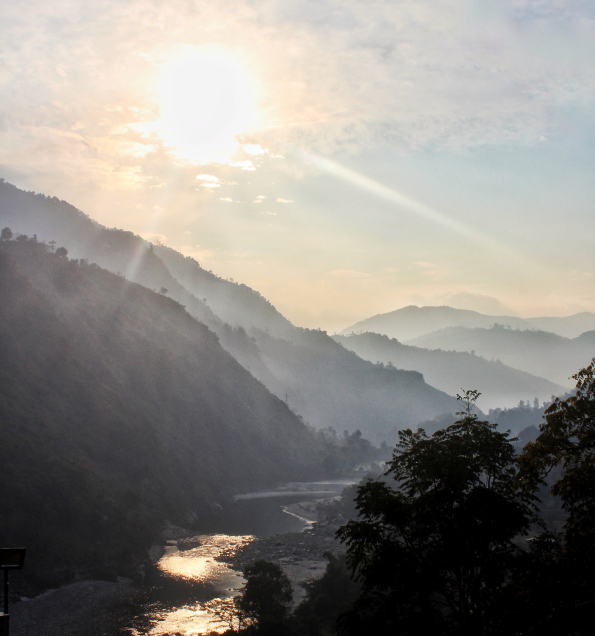 (Quick tip: Always prefer buses of Himachal State Transport Corporation. They are more punctual and will definitely not ask you to change your bus at midnight)

The first pangs of cold

From Aut, which was cold but comfortable, we took a local bus to Banjar. As the bus navigated the winding roads of the Banjar Valley to its upper reaches, I could feel the cold in the air rising until it started to feel like ice pricks piercing my skin. From Banjar, Jibhi was 6-7 kms away and we took another bus to complete the journey. Of course you can skip the process of changing two buses and just take a cab from Aut upto Jibhi. That journey will peg you back by around Rs 1500. (Note: Bus tickets cost under Rs 100).

Getting our heads around the place

The bus dropped us at a place called Jaypura, a few hundred metres downhill from Jibhi. Let me try and paint a picture of this place for you. At Jibhi, the road the leads from Banjar to Jibhi via Jaypura forks into two. One road goes upwards towards Jalori Pass via scenic villages like Ghiyagi and Sojha. The other takes a U turn, crosses to the other side of the valley and heads towards Gadagushaini. The Jibhi stream tears through the entire region splitting Jibhi and its lower reaches into two halves connected by wooden bridges.

There are properties all over the place and we chose to stay in an isolated wooden cabin on the road that leads to Gadagushaini. The room had completely wooden interiors and had a scenic view of the mountain front.

A room with a view 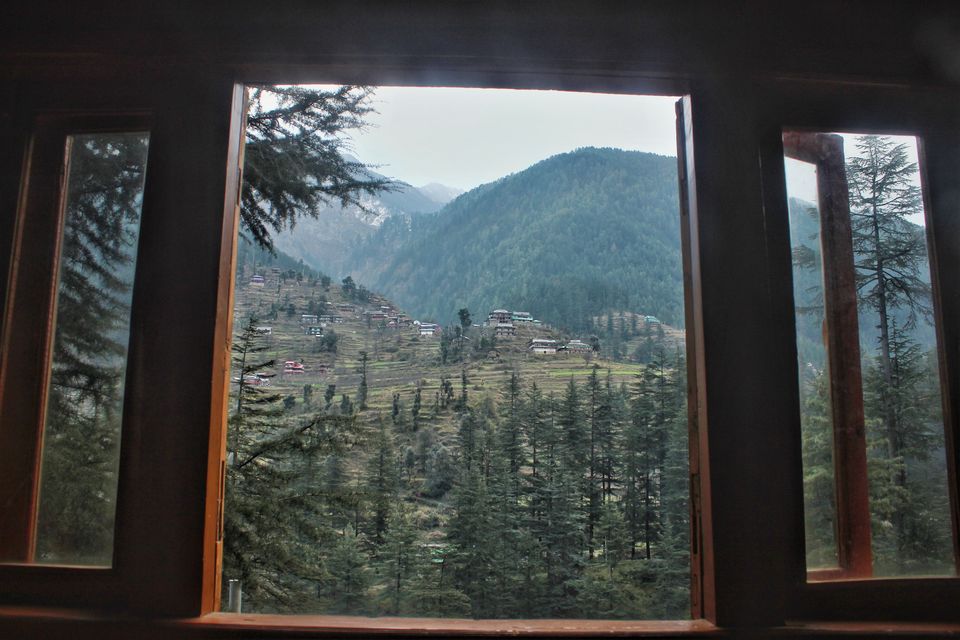 The owner of the place, a local guy, told us that they generally charge 1500 but since it was off season he was willing to give it for 1000 rupees. We negotiated it down to 800 rupees

The cabin where we stayed 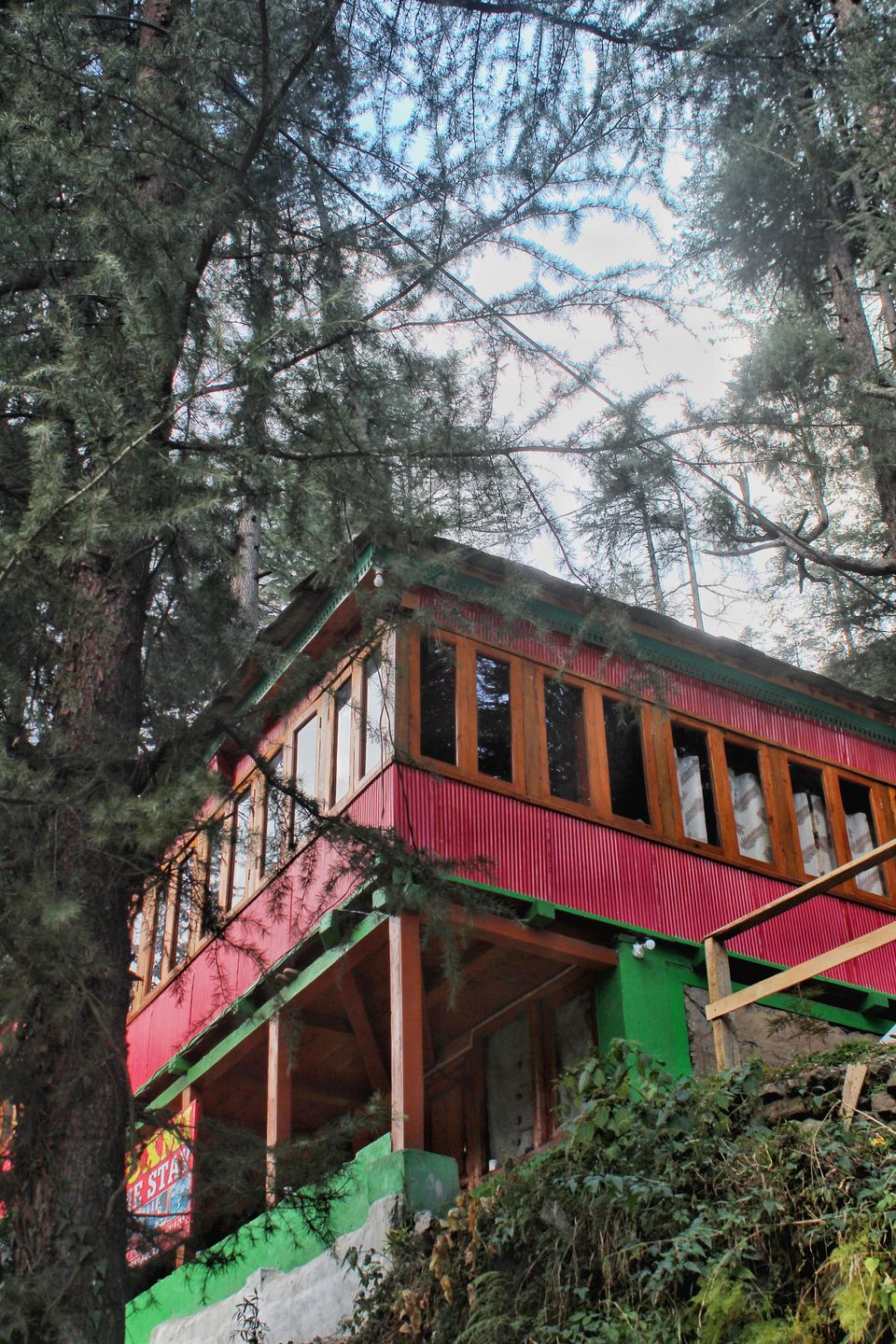 And then we wandered...

We left most of our stuff in the cabin and headed out with our cameras. The plan was just to explore the area and shoot a tonne of photos. We had a very simple lunch of Roti and Dal at a restaurant in Jaypura. I call it a Restaurant but essentially it was a guy with a kitchen and some tables laid out on his roof. We were the only people there and I had this strange, eerie feeling like we were in a sort of a forgotten place, lost and secluded. 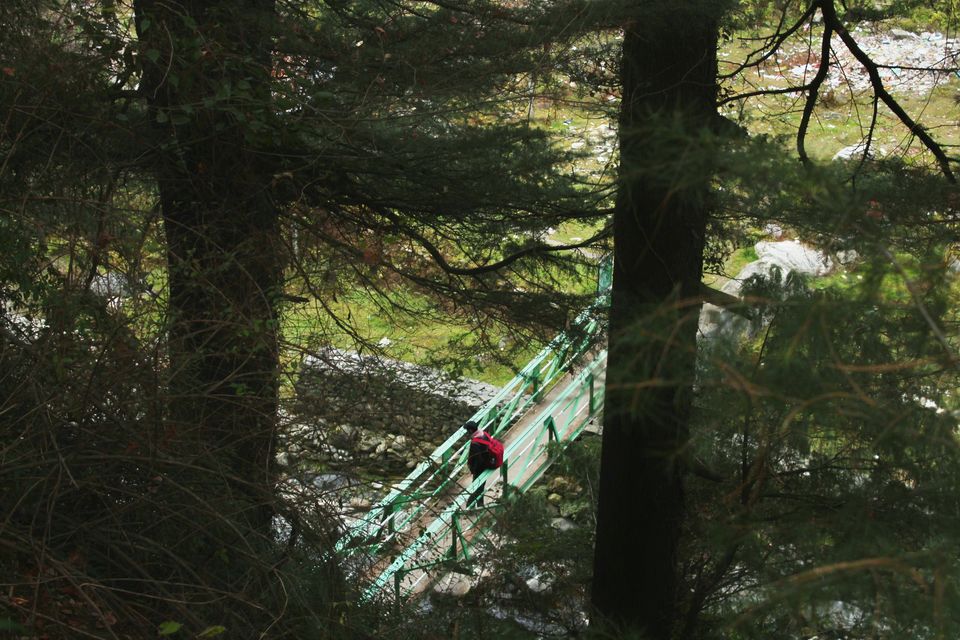 While we were having our food, it started to rain. The clouds engulfed the distant mountains and the forests of pine were draped in mist. It was cold, but surreal. Camps along the Jibhi stream looked like dappled spots of red on a blue screen.

The rain could have potentially ruined our day. But fortunately, the erratic weather of mountains meant that soon the rains subsided and we headed off to explore Jibhi, which honestly felt like a Ghost town but a damn beautiful one! 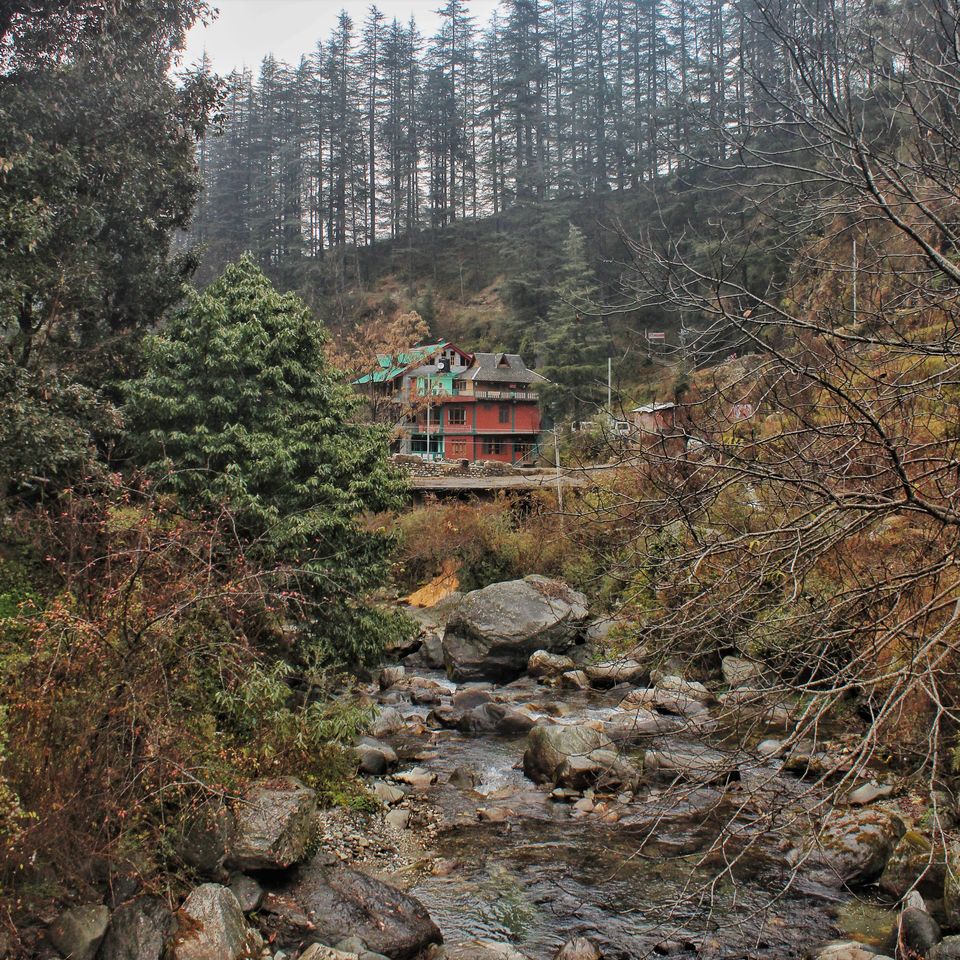 There was not a tourist in sight, just pretty wooden cottages lining up the slender stream. There was not a sound to be heard apart from the gurgling sound of flowing water. Like I had said earlier, it felt like we had found a beautiful corner overlooked by the rest of the world.

We walked along the stream for a while. Occasionally the clouds cleared for a brief moment revealing the snow clad mountain tops. Occasionally we came across some locals going about their day nonchalantly. It felt as if they are so submerged in this world that the beauty of the place does not register with them anymore; it is part of the regular monotony of life.

After wandering about aimlessly for a couple of hours, we sought to look for the waterfall nearby which I had heard is beautiful. On a side note, I have to say the people there are pretty unimaginative when it comes to naming their attractions. The village is called Jibhi, the stream that flows through it is called Jibhi stream, and the waterfall is called, well you guessed it, Jibhi waterfall. 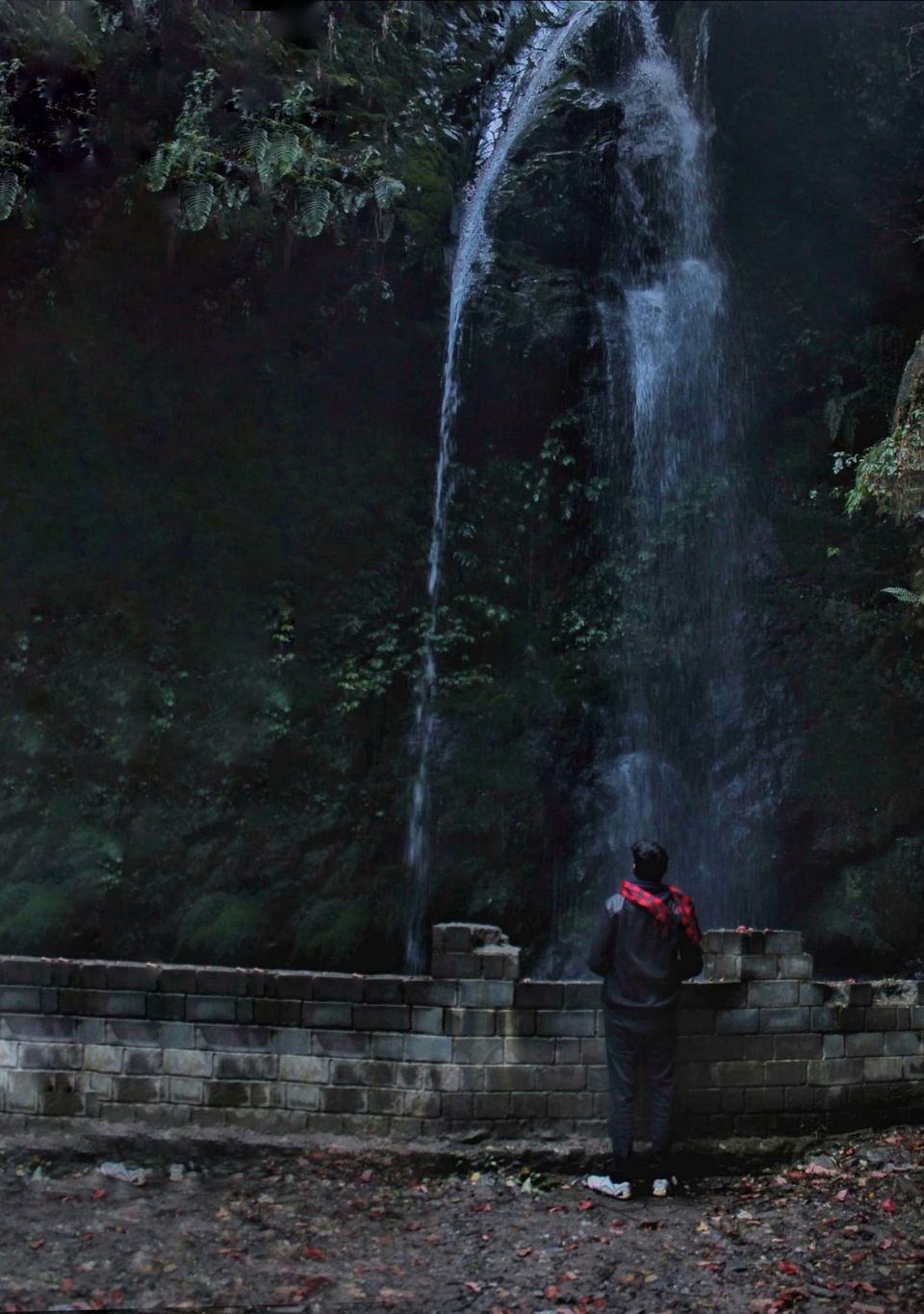 Finding the waterfall was a task though. There were no signboards and even google maps gave only a rough idea as to where it might be. But after a while we managed to find an opening that led to narrow ravine-like trail, lined by walls of the mountains on both sides. It was like an echo chamber with the sound of rapidly flowing water subverting any other sound.

At the end of the trail, stood the waterfall, grander, more beautiful than I had imagined. I will let the pictures tell the story but how can something as simple as water falling down a cliff be such an amazing sight to behold?

Soon, evening started to transition into dusk and we knew it was time to call it a day. Walking on shallow streams and trying to make images of a waterfall meant that water had seeped into my shoes. That coupled with the cold air was distinctly uncomfortable. But nowhere near bad enough to ruin a spectacular day.

We were back in our cabin by nightfall and had a simple dinner of Roti and Dal cooked by the family that owned the place.