Spiti on a motorcycle

The huge massif on the north had cast a dark shadow over the village. Nestled between steep mountain slopes on its north & south, Chitkul opens up to a magnificent vista of snow capped peaks towards east. It’s on the same direction that Tibet lies, about 100 km from here. I read the signboard twice ‘Last village in India before Tibet’. So far, it has been how I had imagined it to be, brown and yellow snow-capped mountains,  prayer flags on the road side, herd of sheep blocking (and flocking) my motorcycle. I wish to land up into more obscure and rough landscape from tomorrow.

“You don’t really cross a mountain, the mountain lets you through” -‘Long Live the Kings’

After crossing Sangla, the road towards Reckong Peo turns into a dirt track, laden with stones turned up by the trucks which traverse this Hindustan-Tibet highway. I had planned to stop at Kalpa for the night. But, the beauty and thrill of the road keeps me going. I will stop over at Pooh, as late as it can get. After filling up the tank at Reckong Peo, as I stop for a tea and cigarette, the sun starts to set. The rest of the highway up ahead is literally cut through the mountains, like a tunnel, with the right side sloping down to a deep gorge. The night starts abruptly where my headlamp ends. There are few headlamps going ahead in the opposite mountain slope, kilometers apart. Pooh is essentially a transit town, where truckers, travelers, riders spend the night enroute Kaza. It’s a busy time outside the hotel, people shouting in the dark, trucks being loaded with peas. Yes, peas, sacks and sacks of them.

After Pooh, I land into splendid tarmac winding up its way towards Nako. I came across a shepherd herding his sheep across the road. Dark skinned and wrinkled, he has typical Tibetan features, the ones we see in movies and photographs. And a broad smile. We understand nothing of each other’s words, but he definitely showered me with the poor man’s flattery about the motorcycle.

The right turn to Gue village comes 3 km after crossing the Sumdo check post. As is the case with most villages in the Himalayas, the village is flanked by a river of the same name, Gue – a greenish-blue gurgling mountain stream. It is said that the Gue Mummy – center of attraction of the village, had washed up ashore the Gue river, from Tibet. The ride through the village is enchanting, as the limestone peaks turn golden against the setting sun. The Gue Mummy rests in a small room. And the key to the room lies with Paldon, a 4 year old girl, who is all smiles when I give her a chocolate bar.

About 22 km from the Gue interjection lies Tabo, famous for its 1000 year old monastery. I remember the ride to Tabo for two reasons. First, it was the first time that the true beauty of Spiti Valley started to unravel around me. To my left, the valley descends to a narrow gorge cut by the Spiti River, and again climbs up to the peaks on my right – with a silver lining snow topping the peaks. Secondly, it was bitter cold; A fierce chilly wind got through my thermal and riding jacket, right to the bones. I reached Tabo along with a caravan of honking Maruti Altos’ taking a famous monk to the Tabo monastery. Women clad in silver jewellery in the head and colorful overalls greeted the monk with a traditional white silk scarf. The pious occasion was perhaps marred by a group of intrusive tourists shooting with phone cameras, right up to the nose of the women. The night was unusually warm and pleasant, and I had to remove the layers of woolen and thermals one by one from under the sarcophagus of blankets. Next morning, I woke up to the sound of chattering birds and lovely sunshine. The Tabo monastery, built in 996 AD consists of a row of mud houses, with wooden roof. Each roof has a skylight which lights up each room beautifully. The walls are painted into murals and stories about the Buddha, and the inside has a typical aroma of Tibetan incense sticks, burnt oil lamps; and deafening silence.

At Attargo, I crossover the Spiti river basin and head towards the Pin valley. It’s late autumn, and the Pin River is a narrow stream flowing at an easy pace to join Spiti. It is fed by glacier melt water, and its wide river basin, and deep gorge bears testimony to its perilous stature in summer. The sprawling Pin Valley falls down to the river basin and extend towards north before ascending to the steep mountains once again. It is among these peaks somewhere that the Pin River starts melting away from the glacier. Sometimes, the road tells you that the place you are going will be something special.  After about 40 km from the diversion, I am greeted with smiling old women, white houses, blue windows and fluttering prayer flags of the quaint Mud (pronounced ‘Moodh’) village. It’s noisy last few hours at Mud, children are herding the cattle back, some having their last game in the sun. Four glittering royal enfields parked on the road mark the only visitors in Mud. A bunch of Israelis, with maps, leather jackets and Bose speakers have made their home in a small café. I order a tea and watch the sun gradually recede with a final sparkle behind the cliff.

It’s mighty strange, one would say, to the way geographical borders are surpassed. As I sipped the tea, I just realized the same, sharing the table with 2 Greek guys, a Spanish woman, and a Malaysian woman. The conversation kicked on with the hike to Dhankar Lake, the idiosynchrasies of Visa rules, Inner Line permit, and long duration train journeys. The Spanish woman, Anisse, has calm blue eyes, the ones which would melt down any blood thirsty anger, and an equally calm take on things around her; probably best suited among us all to survive the pandemonium. The trumpets and drums had just stopped from the monastery, and now only the breeze is blowing fiercely through us. It’s time to go under the blankets once again, and wait for the precious sun to rise up.

Dhankar wasn’t a planned stay, I had hardly covered 60 kms from Mud the day. I decided not to waive away from the schedule for feminine attraction. Not this trip. I reached Kaza pretty fast, and had to see Key first. Perched atop a mountain, the famous Key Monastery overlooks the Key Village and is the crown jewel of Spiti. The Monastery has been ransacked 4 times by various intruders, and once partly destroyed by an earthquake. A marvel of ancient architecture, the 1000 year old monastery still stands atop like an old guard. I think the huge prayer flags fluttering in the wind and smiling lamas is the quintessential image one takes back from these monasteries, and I am greeted with both here. The monastery houses a huge prayer wheel, about 8’ tall and 5’ across. There are living quarters also for the tourists. But I’m not staying here tonight; Kibber is the next destination for the afternoon.

I hit the sought after golden light while going to Kibber. Clear blue sky and yellow mountain slopes on either side made way to Kibber Village. The two storey Kibber Monastery has a Chhorten right in front of it, and has the same white color and brown windows as the houses I saw in Mud. “Take a photo of us fighting” – two kids with plastic club and mask breaks my spell. I suddenly realized it was Dusherra yesterday, the day the power of good in the form of goddess Durga prevailed over evil ‘Ashur’. It’s really strange to find a quintessential Hindu festival reaching the higher realms of the Himalayas, where Buddhism is the primary religion followed by the people.

Next day I wake up to the same chores of laughter, cattle being herded, and two guys conversing loud across the mountains. I go through Langza, which has a famous statue of Buddha, and also fossils to be found by the river side. My motorcycle earns interest among kids and lamas, a thing I enjoy and shamelessly allow to seep in my veins. Hikkim, boasting arguably the highest post office in the world at 4440 m above mean sea level, falls unmistakably on the road to Komic. At the Y-fork towards Hikkim, a bunch of kids flocked my motorcycle and urged me to take the steep and dubious road towards the village. I suspected the road was too steep and wasn’t fit for my bullet, but went on. After just a while, I had my first fall, the steep slope was too much for the brakes, and I fell tumbling down.

Soon after Hikkim, the magnificent Tangyud Monastery of Komic came into view. The old monastery has a courtyard in the middle, and row of rooms on either side. The courtyard opens up to the main prayer room. The new monastery is a big and red two-storey structure, with wooden window frames and golden parapet wall on the terrace. Tanpa, a warm hearted, middle aged guy runs a home-stay, and it has a huge room with windows covering an entire wall. I had the most relaxed time of the trip in Komic – walk in the fields, bask in the sun, watching lamas play an intense game of ‘Tsho’.  It’s good to stay in a village and among the shepherds, makes one feel how many boxes we actually had put around ourselves.

Couple of days in Komic, and I am raring to go. Today I plan to cross the Kunzum Pass, the highest point of Spiti. I cross over the Spiti River at Kaza, and the landscape changes to a great yellow plain, with misty mountain tops far ahead. The road is taking me right up there. Quite a few clouds have gathered overhead, and I hear that it had snowed the night before in Kunzum. The wind rustles through my helmet and buffets my jacket. Only a rider can feel the heightened sense of open road, high mountains, wind on the face and thump of the engine. Quite a tough ride ahead, I hear this stretch is the most difficult of the trip. Some water crossings, but we should do fine, as long as the water is low. I find snow on either side of the road, and it gradually increased as I approached the pass. On the top, at 4555 m, there is a beautiful white Chhorten, circled by prayer flags.

I reached Battal around 5 and bumped into Tenzing, who owns a camp in Chandra Taal. He’s quick to bag a bottle of old monk and sat behind me in the motorcycle. We took the narrow road towards Chandra Taal, bumping and jumping over the rocks. Soon, we got a glimpse of the Chandrabhaga River, winding its way away from the lake. Tonight, I take shelter in a tent. Several layers and two sleeping bags are making a desperate attempt to keep me warm. Morning came early, and I rode up to the lake. Chandra Taal will definitely take your breath away, if Suraj Taal or Pangong of Ladakh didn’t. It’s like a sheet of glass, suddenly kept among the mountains. There isn’t any soul around, only a slow breeze blowing past me. The clouds seem to have clung on the peaks during night. Now, gently moving away from them. It’s time for me to leave the mountains too. 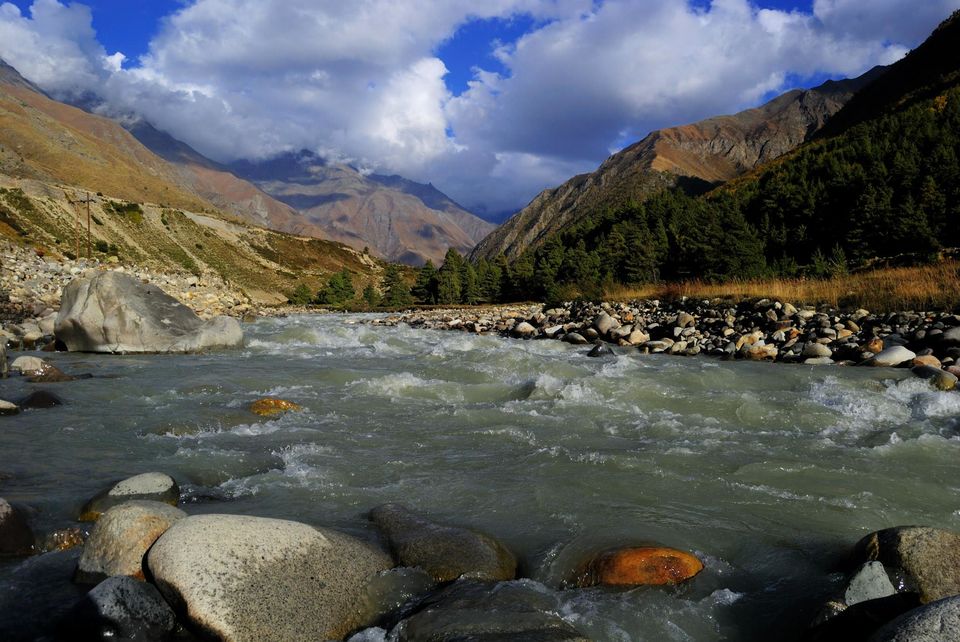 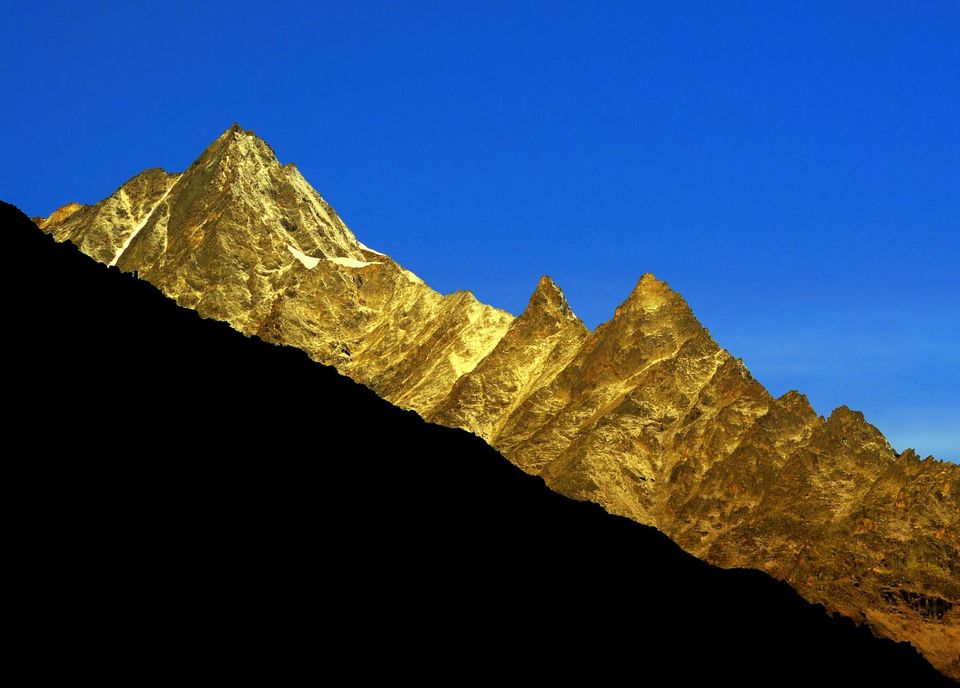 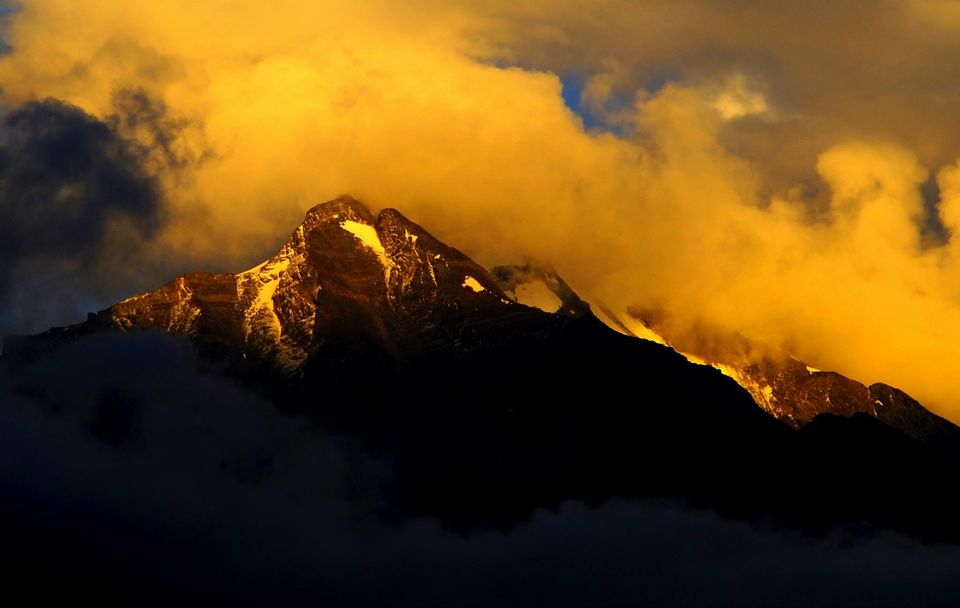 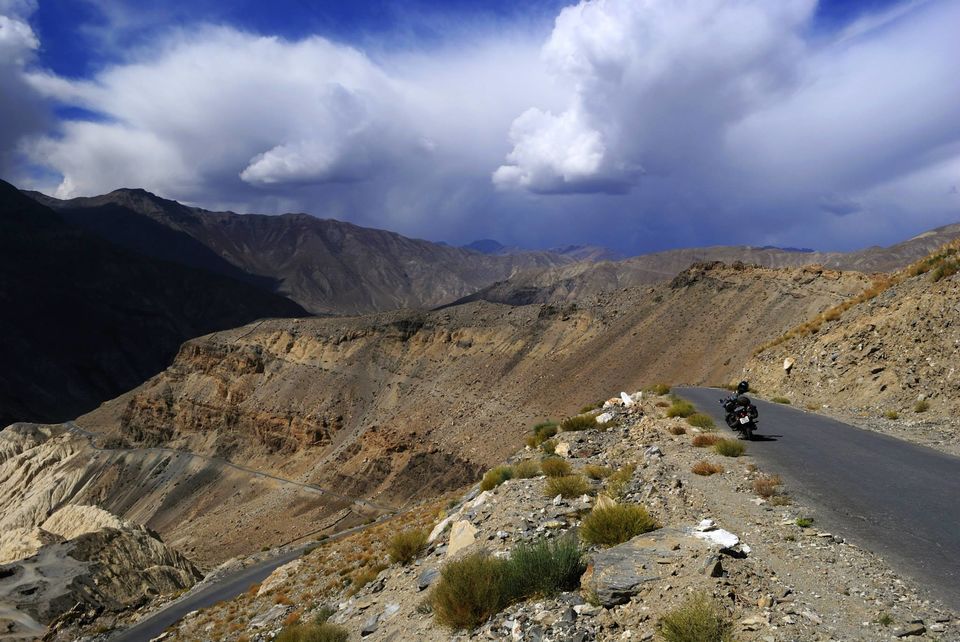 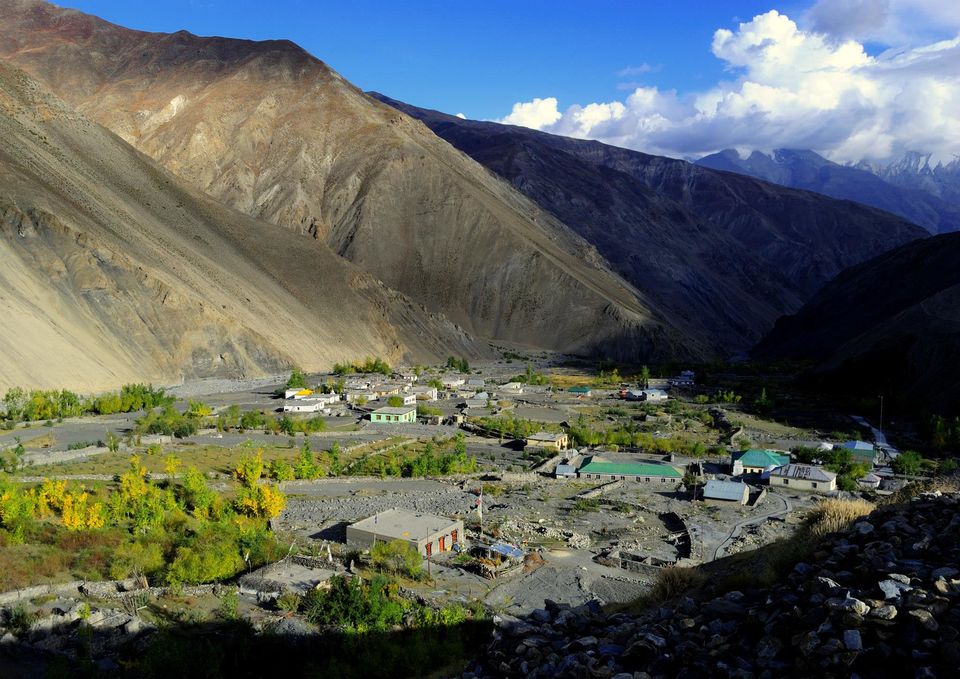 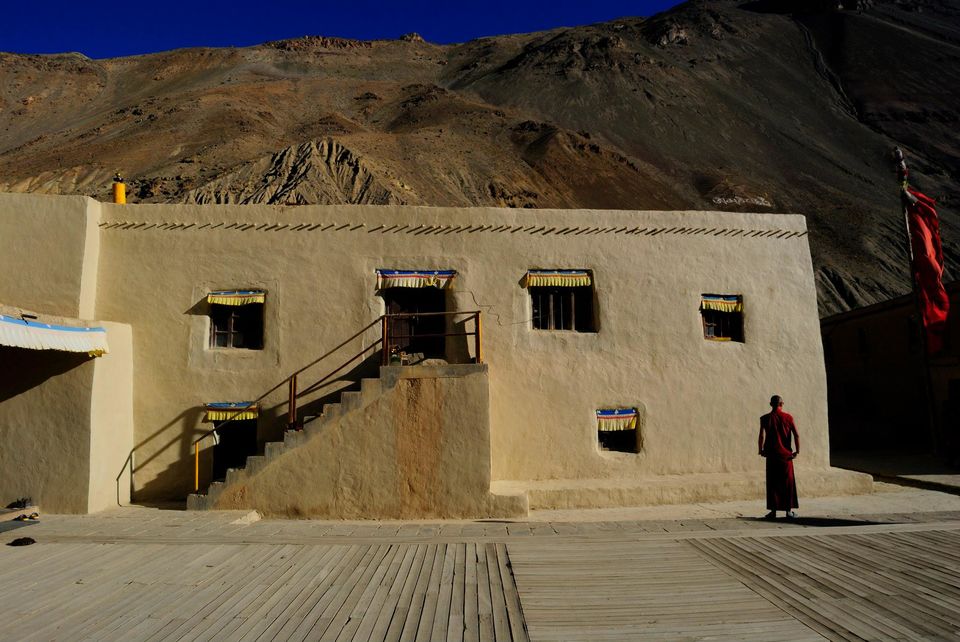 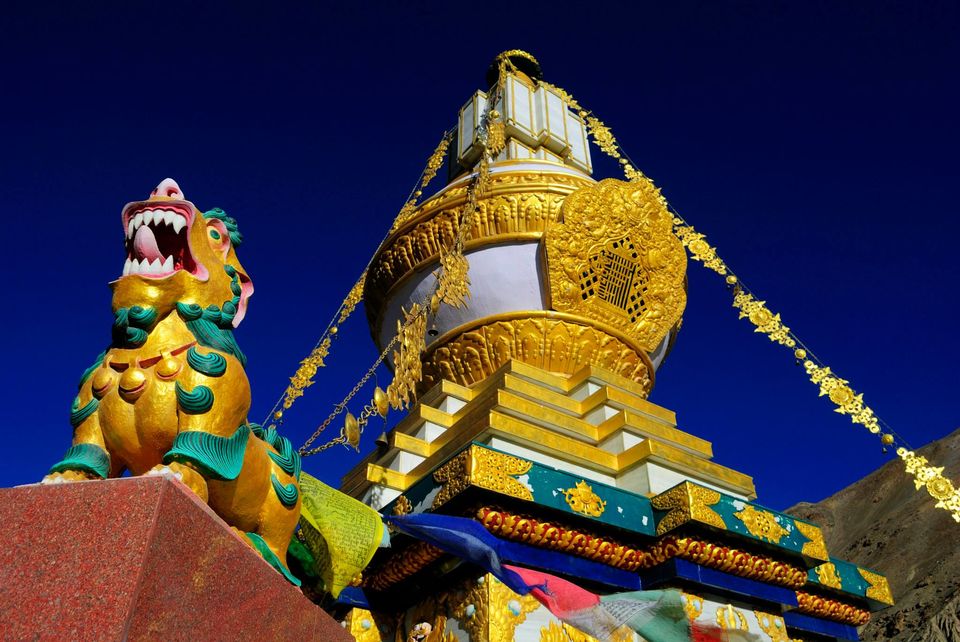 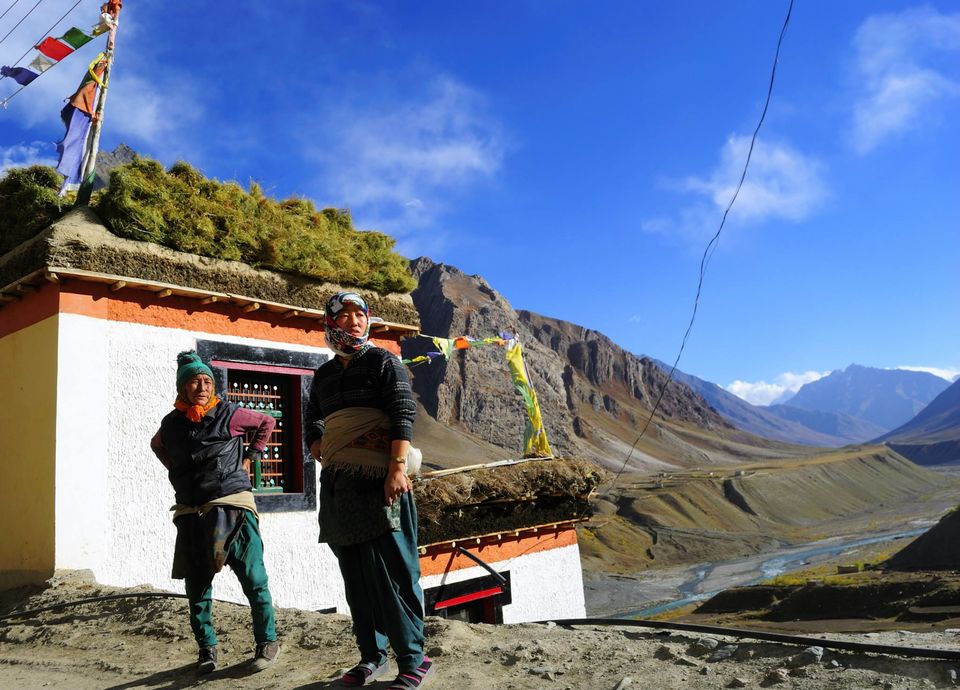 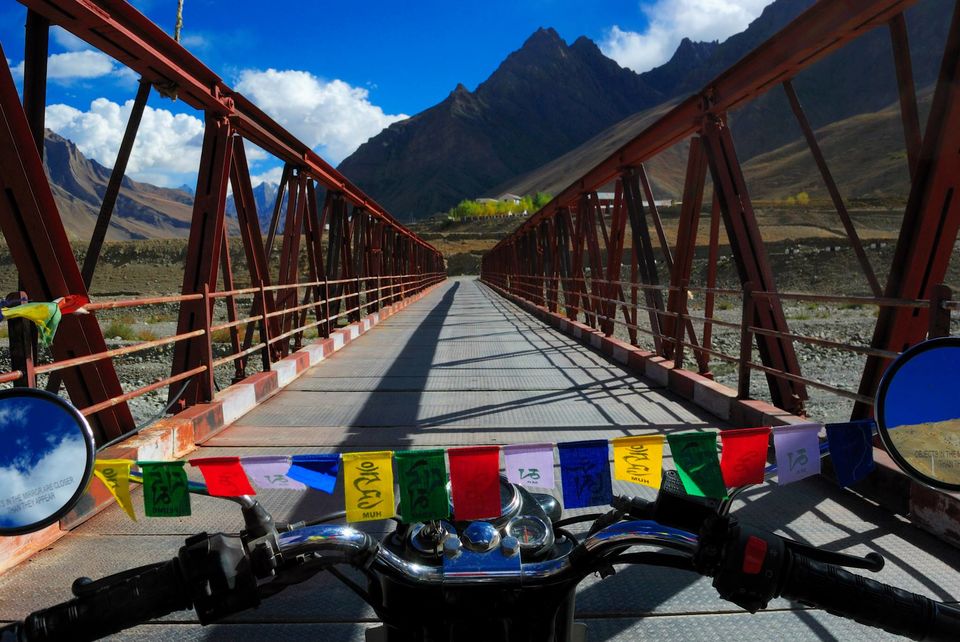 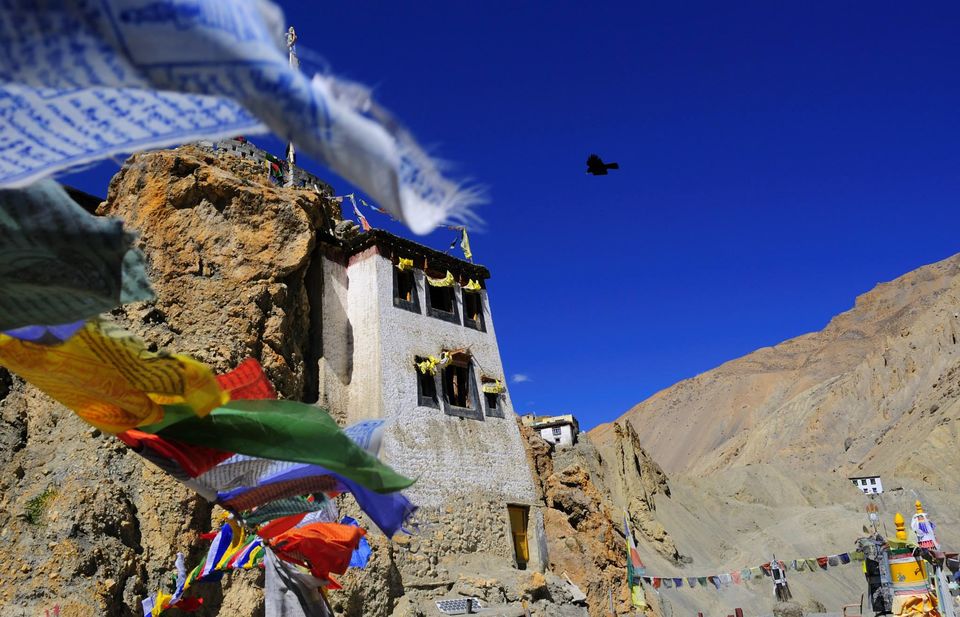 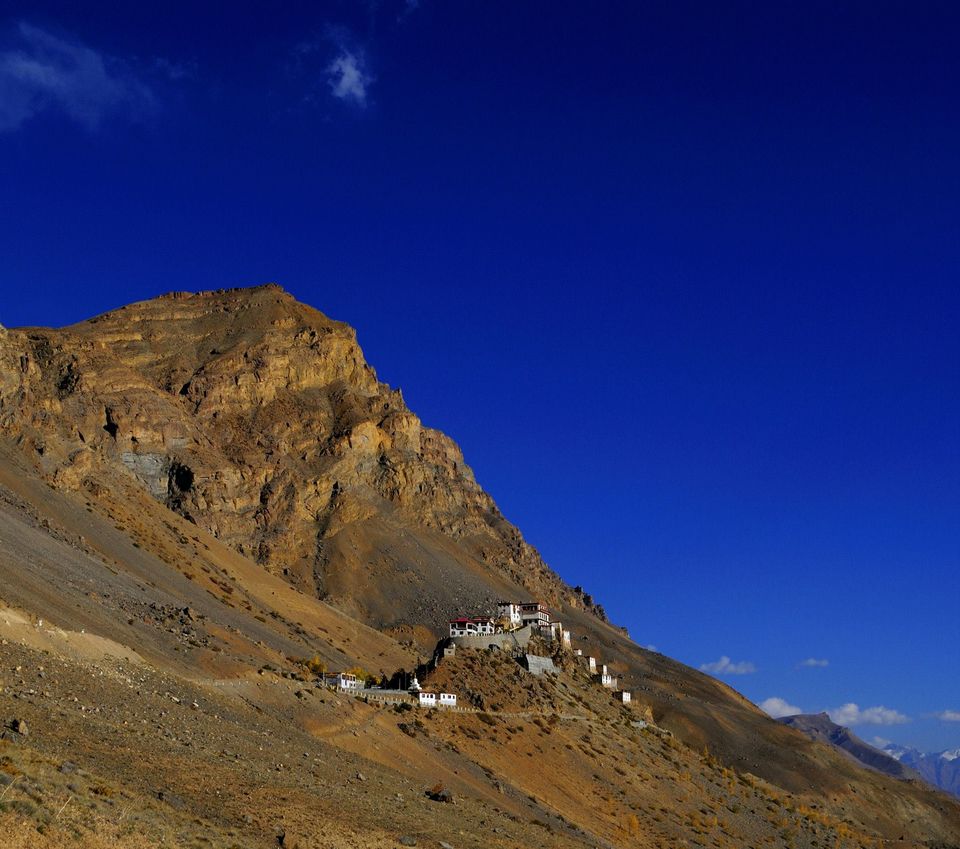 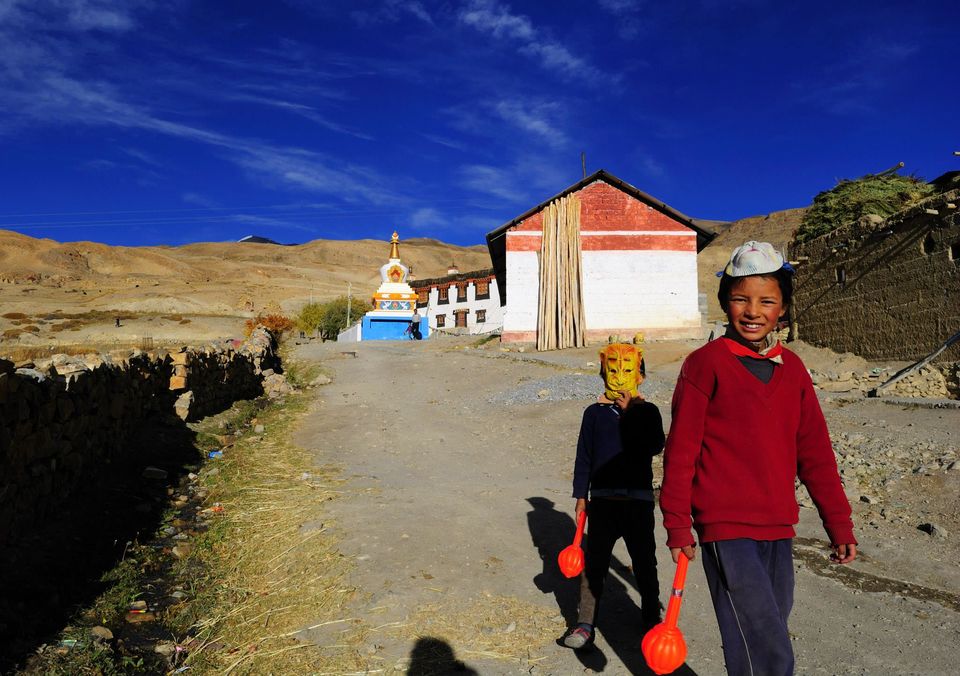 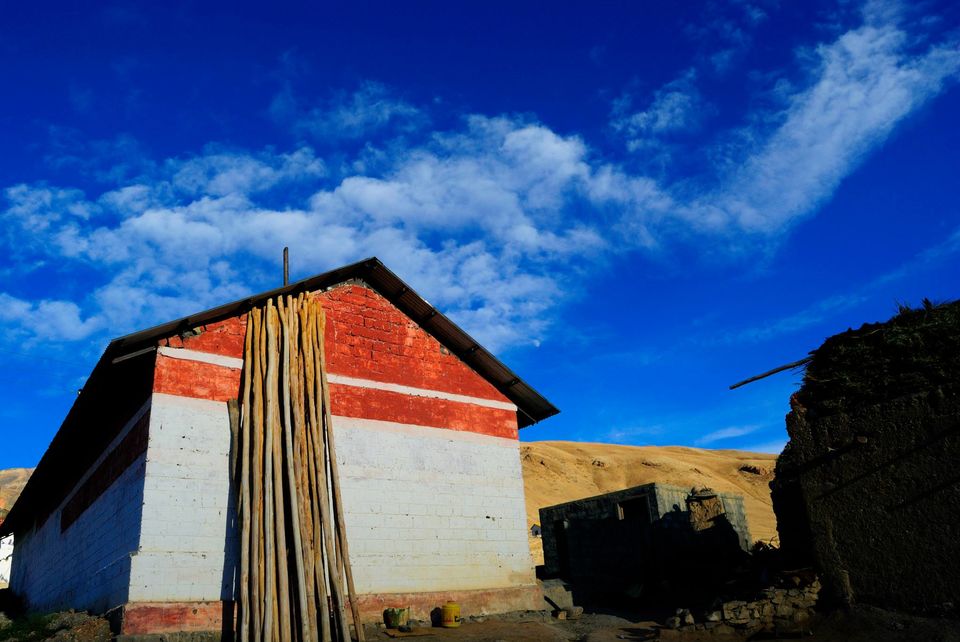 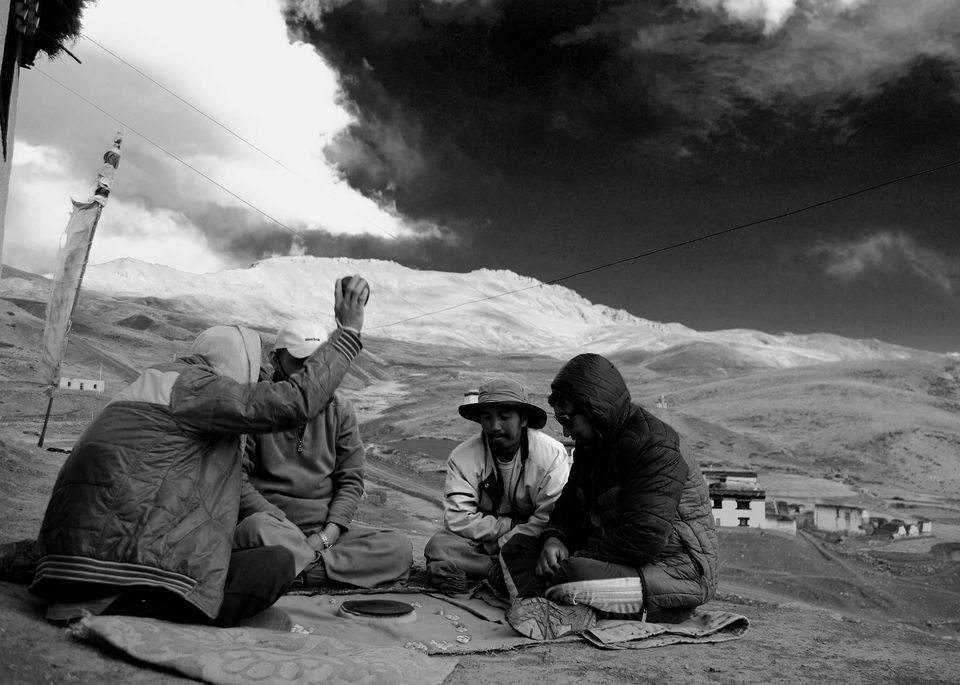 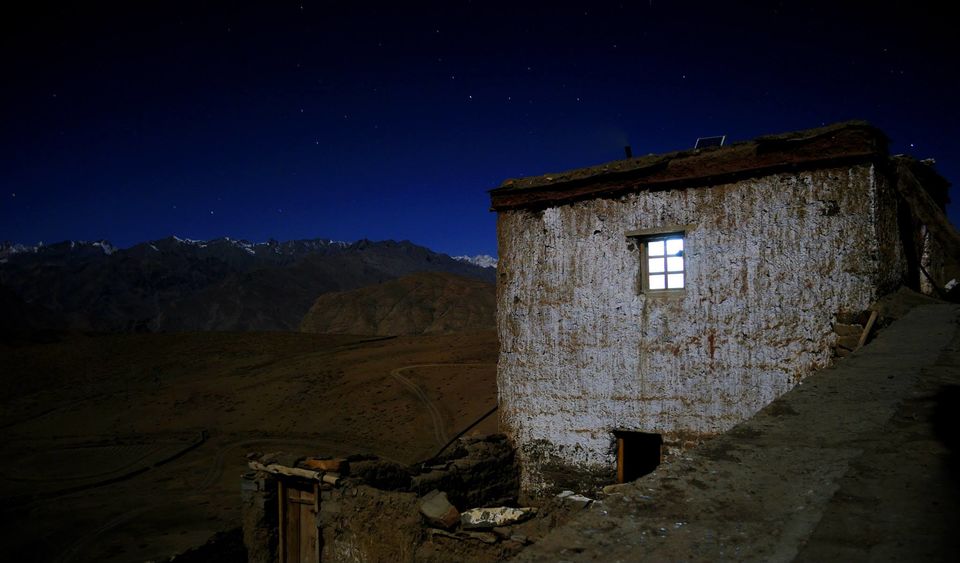 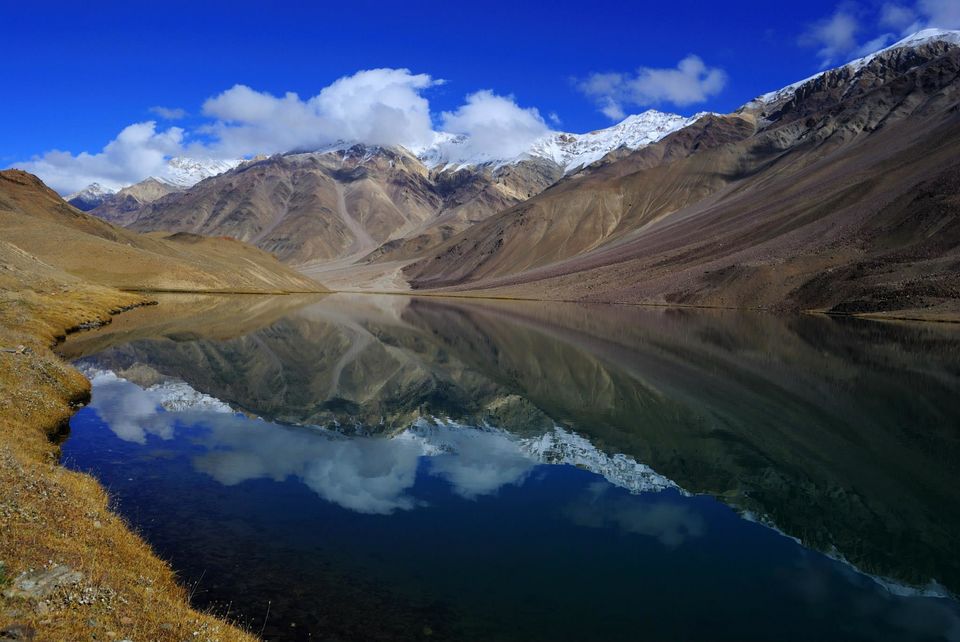