My journey for Hornbill #TravelDisaster 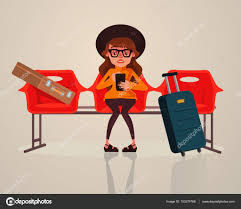 After having failed once to go to Nagaland for the horn bill festival as our Waiting list ticket was still in waiting list even though we booked a month back I booked a tatkal train ticket for Avadh Assam Exp. for 6.10 form New Jalpaiguri (NJP) Railway station on the 5th. I even got in touch with my friend's sir who was working in Assam who helped me find a person to host my stay at Kohima so that my trip could be done in the budget I had.

All excited I left my home at 12 (in Gangtok) and got into the government bus which took me to Siliguri by 5.15. All through the journey, I was smiling excitedly about my first solo trip which was finally happening.

I had made it on time and walked right into the station to check which platform my train would be. The message on the board read - 15910 Avadh Assam Exp, delayed for 4 hours, expected arrival- 10.30.

I had made it in time to read my delayed news but since in winter it gets dark by 5ish so I decided to wait it out in the station. 4 hours, how bad could it be.

6-7PM: I called my cousin, informing her about my delayed train and spoke of her trip to northeast at the end of this month. Things she should get, warm clothes, etc. Then played with this baby who kept snatching the book I was reading for the next half an hour.

7-8PM: Called another friend, started planning a trip to Goa for new years. Then I keep the phone and start reading my novel when an old lady comes up to me and asks about a train to the northeast. I reply I don't know and she just stands there and stares at me for the next 20 minutes until her train arrives.

At around 8 the shopkeeper from a counter comes up to me and asks me to go sit on platform 1 or the waiting room as I was a girl sitting alone and that my train would be late. I left my seat (I was sitting on the floor)on platform 3 and headed towards platform 1.

8-9PM: I took around 15 minutes to move my base from platform 3 to 1. I looked for a suitable place to set up my camp and finally right outside what is called the "upper class waiting area" I sit. I take a toilet break in the "lower class waiting area" and then headed back to reading my book

9-10PM: Dear passengers, train no. 15910 is delayed by 8 hours and expected arrival is now 1.50 in the night. Inconvenience is regretted.

Had another 4 hours on my hand now. Started staring at the ceiling. After I counted the number of rafters there were on the ceiling to support the roof I called another friend of mine. His words of encouragement included - oh once I was waiting in Delhi for my train which got delayed by 12 hours and then at the 13th hour then announced it has been cancelled. Of course, I cut the call soon after that and continued reading my novel.

10-11PM: I notice a beggar trying to get into one of those plastic sheets as his sleeping bag. He was shivering. It was pretty cold. He then put his legs into the plastic tarp and pulls a dustbin down rummaging it for food I suppose. He doesn't find much. He then takes off the plastic from his legs and uses it as a pillow to try and sleep. His bare feet are exposed to the cold.

Right in front of him is another poor guy, he is just sitting and shivering. Not doing anything but just sitting there. I take out my sketchbook and sketch this scene out. To remember.

To not complain about not having this or that when these people are suffering so much in the cold, living day by day not knowing if they will have something to eat or wear the next day.

Getting philosophical in the middle of the night 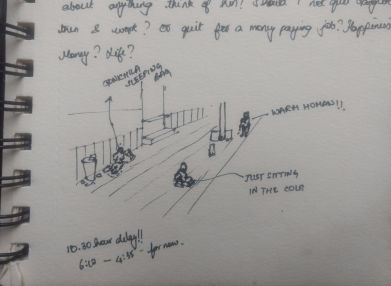 11-12PM: I am feeling sleepy so I call up another friend. I didn't want to fall asleep on the platform just like that. This friend was at his cousin's wedding. But of course, talks to me the minute he learnt I am alone in the station. We talk about going on a road trip I keep the phone down asking him to go dance at the wedding while I read my novel. I tried sketching the station but it was cold, I was sleepy I left it incomplete. 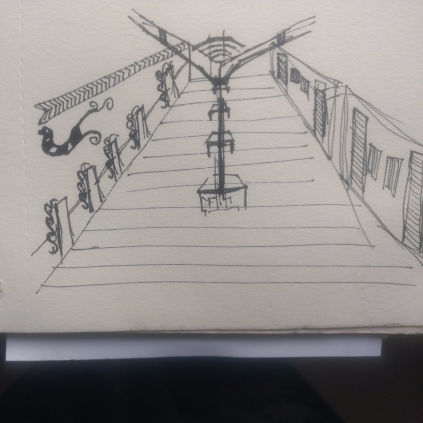 12-1AM: Another friend calls me back and starts talking about marrying cows. How it is better than marrying a girl, how she won't complaint and just listen to him while chewing grass. I suppose this talk went on for at least 20 minutes until told him to send me proof of this cow girlfriend he supposedly had. He then went to sleep saying I could call him back any time if I wanted to talk. Of course, I could.

1-2AM: Dear passengers, train no. 15910 is delayed by 11 hours and expected arrival is now 4.30 in the morning. Inconvenience is regretted.

I couldn't read my novel anymore as it was making me sleepy. I look around, people are sleeping on the platform with 2-3 blankets on them. The wedding friend calls me back to check on me. Warms me to not get on the train if it comes after 5 because then by the time I reached Dimapur it would be 9 in the night. I keep his call after he also assures me I could call him whenever and he was there. Of course, he was, I wasn't scared. I was just sleepy and bored.

2-3AM: I shift my spot. Away from the upper class waiting area, I walk into the lower class waiting area. It is warm and stuffy in there but there is no place to sit. Every chair is taking and almost every part of the floor too. I couldn't sit in here. It was too claustrophobic so I head back to the platform and walk. I found another seat on the other end of the platform where a couple were sitting. I sit there. I eat a sandwich I had prepared from home and got.

3-4AM: I think I fell asleep for 10-15 minutes now. I check my phone for the time often but it passes by slowly. I was feeling cold now too. The breeze was cold. I start thinking to myself if I should get into the train if it comes after 5. I would get into it if it came before 5 I told myself. I am confused with what to do. I had not mentioned it was delayed by so long to my mother and if I had I was sure she would ask me to go back home.

4-5AM: I start walking on the platform as it is too cold. I see a message from my mom asking if it still hadn't come. Well, it hadn't. And neither was there any announcement about its arrival. I call her up and tell her. She, of course, asks me to go back. But I had waited 11 hours!

5-5.30AM: The Arrival. The train makes its appearance at 5.20. I am walking up and down the platform. Not sure what I had to do. I walk up to the S1 coach. My seat is in there. It is confirmed. But my mom is texting saying no, don't get in. It is also past 5. I am confused.

I call up my roommate. She encourages with that's how you travel, you just go and make it happen. That's how all your stories and you waited for so long.I agree with her but my mom said no. I am almost in tears. Confused. The train leaves as I am talking with her. It is 5.45.

6-7AM: It was done. My Nagaland. I get out the station and a taxi driver takes me to his car. I am the only person in his vehicle and I fall asleep. At around 7 dad calls. He asks me where I am and that I shouldn't get into the train. I didn't. Seeing me awake the taxi driver makes me move into the other taxi which is full and leave. I finally leave NJP at 7 in the morning after spending 13 hours in there.

My beloved NJP at 6.30 in the morning 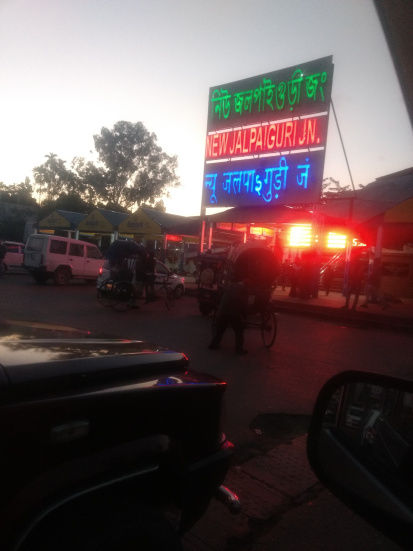 7-12AM: Back on the familiar curves of the route to Gangtok. Of course with my luck, I got the seat in the front, between the driver and the other passengers so chances of sleeping were nil. But I wasn't sleepy anymore. I start talking to the uncle next to me and then the driver. My friends who I had spoken to last night call me, asking where I was. I inform them and tell them my phone is about to die but I am all good

Horn bill was fun! Everyone should definitely visit. Just not in Avadh Assam Exp.