"Bahl it shall be," I told my then-colleague-now-'not permanent-roommate' over the phone. From the day I know her, I have realised two things. First, her arguments never give way. If you remember the 5-minute-long monologue by Rajjo from the offensively-misogynist-yet-unarguably-true Pyaar ka Punchnama that says ‘Sense jaisi bekaar cheez ki wajah se ladkiyan argument kaise har jaaye’, you could drive in what I am hinting at. Secondly, even though resolute to lock horns with no matter what I say, her love and regards for me puts to rest everything else. So, though it took some time to persuade her, we finally decided upon embarking on a journey to a place that was unheard of (I bet not many would know where Bahl is located), unseen off (the small village hardly gets visitors) and unread of (there is practically very little  about the place on the internet).

Bored of the rigmarole of office, a trip to the hills was of paramount urgency. After all, when you live in Delhi, Himachal Pradesh and Uttarkhand are like your weekend buddies. The backpacker in me was all pepped up when my current roomie got some inkling of it from our conversation. She decided to tag along and I happily agreed.

Munsiyari, Chopta, Barog, Solan, Gangotri, Kathgodam…for at least a week my desktop, which was ornamented with the names and descriptions of inadequately known places of Himachal and Uttarakhand, gave an  impression like I was the one to blame for, for sending the Airtel girl to nettle people in such remote areas of the country.

We were looking for a less-approachable place because-

We had almost decided on the snow-capped Kufri, when a friend narrated the woes of his unpleasant journey to this place near Shimla. Following a discussion with him, I learnt about a small hamlet in the Kangra Valley called Bahl. The photographs he showed were enough to impress me. Even the 5 MP camera of his budget-friendly Micromax phone managed to capture the mountains and soaring pine trees so well. The fact that it was remotely connected from McLeodganj, almost 50kms away, and required a trek of an hour made me seal up Bahl in a jiffy.

The tiring yet exciting journey

Bahl is a small village nestled in a valley close to McLeodganj, which meant we had to reach
McLeodganj first. Without much knowledge of the way Himachal Pradesh Road Transport Communications functions, I started scouting for bookings in a bus. Failing to find one in a sleeper bus, we had to opt for a chair car. What can be more fortunate than having to sit erect for straight 13 hours in the first ever long bus journey of your life! And if that was not enough, my fate was at its capricious best.

So, our seats were reserved in a bus that was scheduled to leave Kashmiri Gate at 7:20pm and we left my office at KG Marg (approx 10kms) at 7:10pm, assuming it to be just a kilometre away. No sooner did we jump into an auto-rickshaw, the driver announced it would take us at least half an hour, something that made our hearts sink. However, pinning onto hope we asked him to whizz through the traffic, promising him some extra pay. Even amidst the thick evening traffic of Delhi I could not fail to acknowledge how neat a job he did by gliding the vehicle through the busy streets of old Delhi. Even after a traffic jam near the New Delhi Railway Station, he dropped us outside the bus stand just in nick of the time; enough for my colleague to stop the bus head on, while I dealt with the auto driver’s payment. Nosy passengers from the already packed bus protruded their heads out to fill in themselves with my colleague’s heroic feat. After an arduous attempt of darting through the humdrum of Delhi traffic, completely drenched in the city’s humidity, the soft breeze kissing the cheeks as the bus picked up speed felt like paradise. Despite the fact that I would start chanting a mantra every time the bus took a turn, it was an interesting journey. Gossiping and bitching away (c’mon we are girls!) it was so fascinating to cross places like Panipat and Kurushetra and ruminate upon history classes. We stopped for a quick break at a place resembling a dhaba, however with too many shops at Ambala. The chill of ice smearing the face when the vendor smashed one to use in the nimbu paani gave supreme delight, especially after the enervating exploit of the day. The next stop was Chandigarh that saw many people cramming in; most did not even have a seat. The last leg of the journey mostly included travelling through pitch-black roads of villages of Haryana before we started making out the shadows of the pine trees of the Kangra. Sight of a toy train route made us unapologetically jealous and we pledged to board one the next time.

One needs to be gallant enough to take up a journey in HRTC. The sight of your bus travelling alongside the edge of a hill constantly is not healthy for the chicken-hearted. 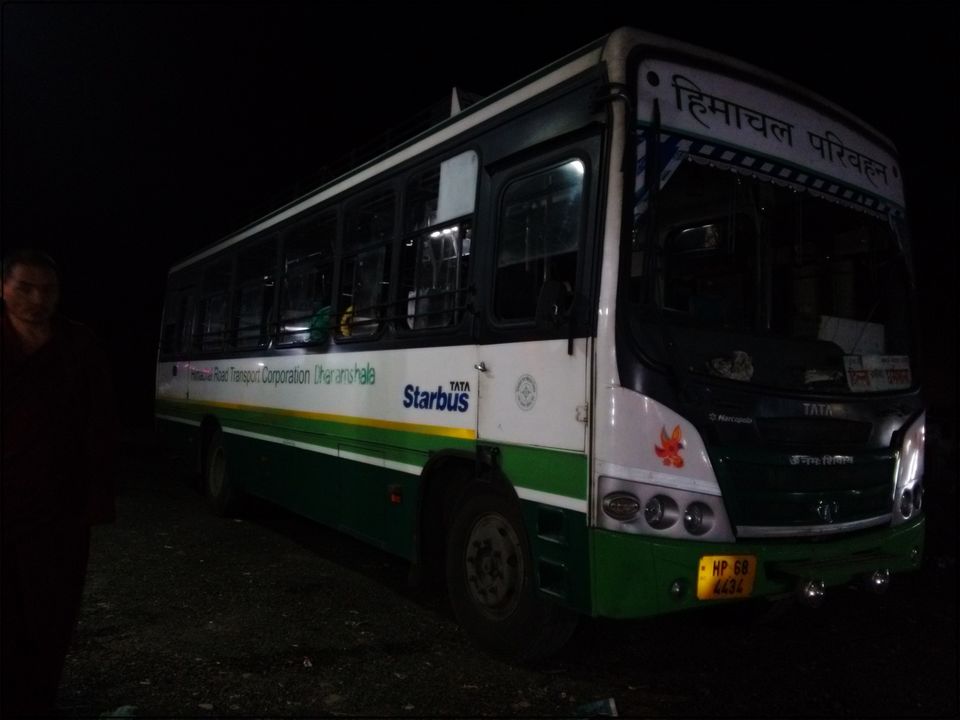 From dusk to dawn

Not always do you get to witness a rising sun, peeping through snow-capped Himalayas or the silhouette of disciplined rows of pine trees. Picture this-with every turn your bus takes, you feel getting a step closer to the Himalayas. Just as we tried to get soaked in the glory of the grandeur, we reached the Dharamshala bus stand and had to board a local bus to McLeodganj. As per prior arrangements, we were dropped by a cab from McLeodanj to Naddi village and this marked the start of our one-hour long trek. 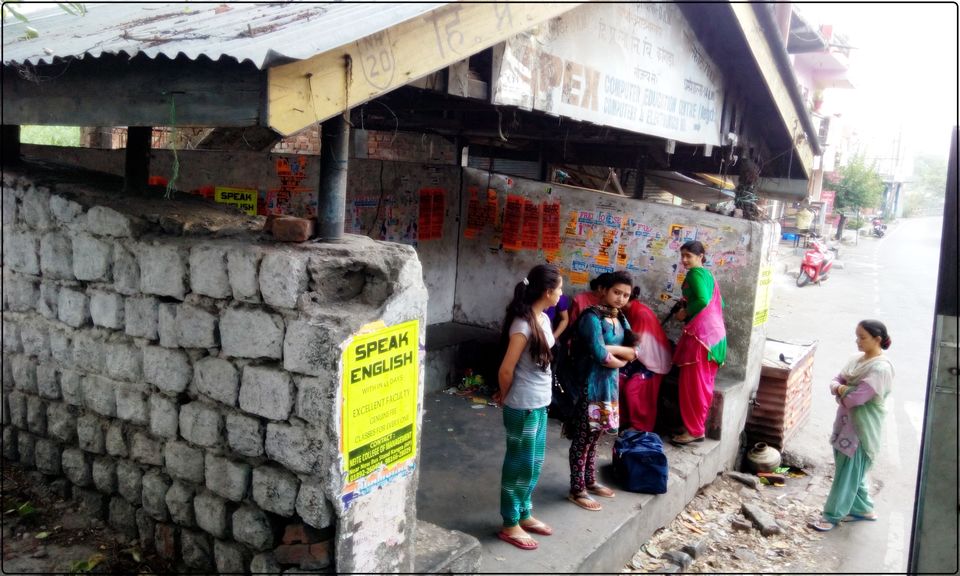 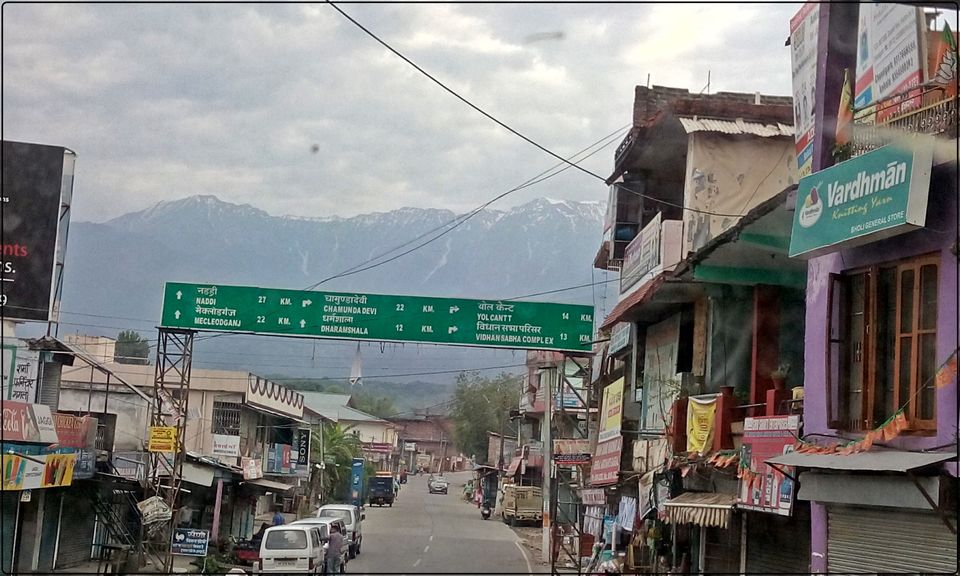 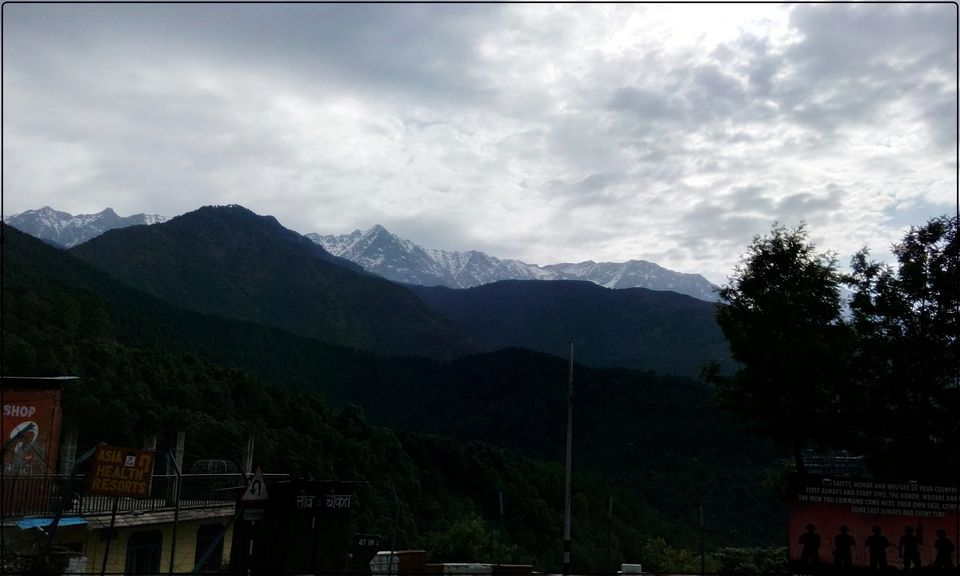 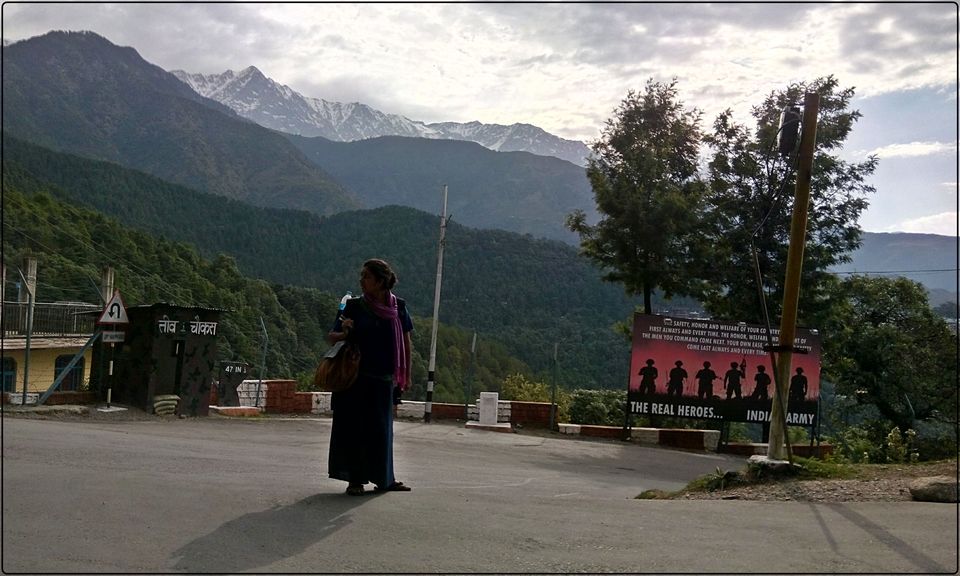 Tiny houses with asbestos roofs overlooking the Himalayas and clean paved roads opening up to rivulets and vast coniferous forests; this is the path we were escorted through our by our 13-year-old debonair guide, Lucky Singh. Finding our way through the woods, with some halts to pose, admire the precise craftsmanship of nature in the form of the giant Himalayas, irritated to find the best of spots to click ourselves already occupied by boorish youngsters and their half-filled Tuborg and frothy Corona bottles, and collecting pine cones, we arrived close to our destination. A dense valley at the foothills of the Himalayas, the sound of a fierce waterfall, sheep grazing in a vast meadow and parked among these- a small wooden cottage. If you take a liking for Hindi movie songs just like me, this might help you get the imagination straight. 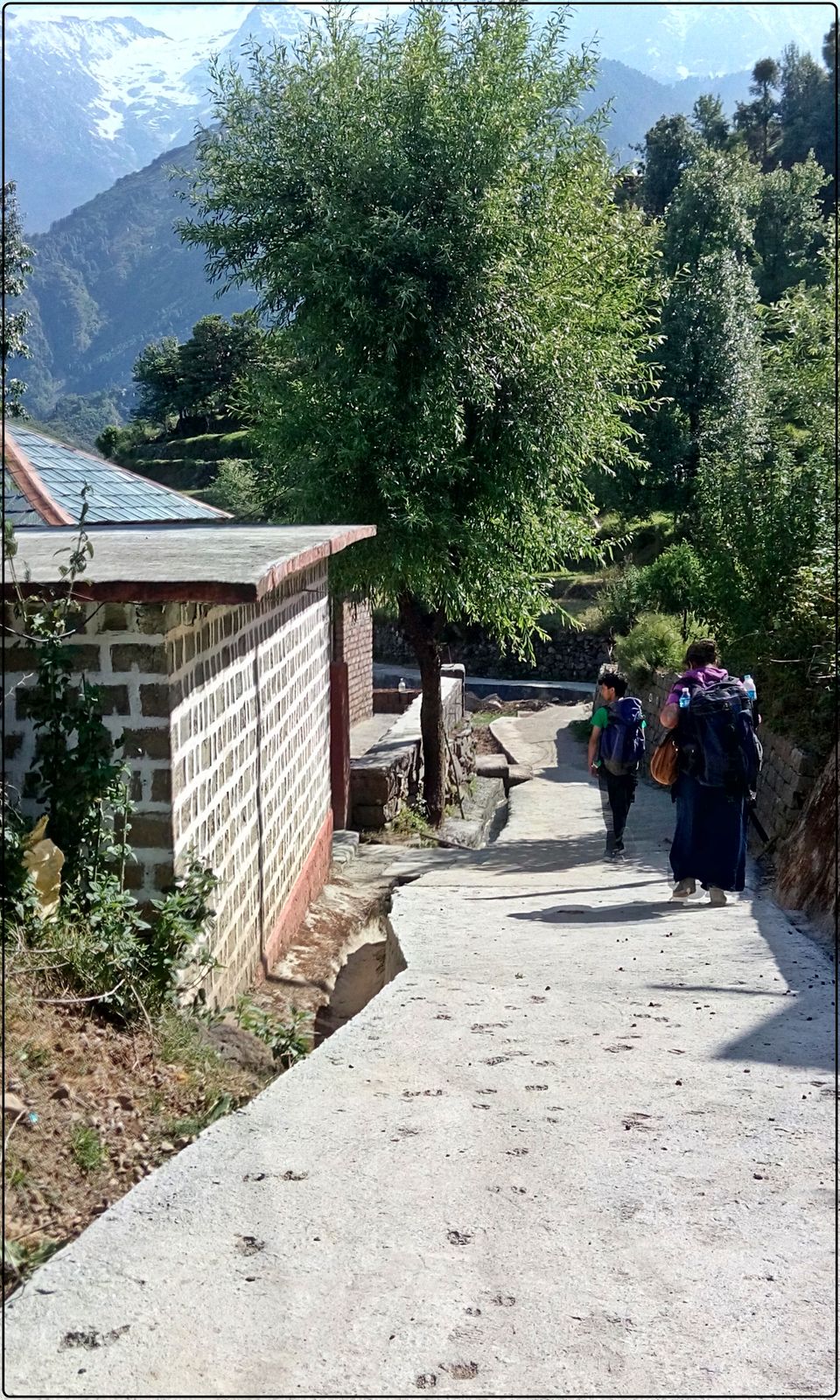 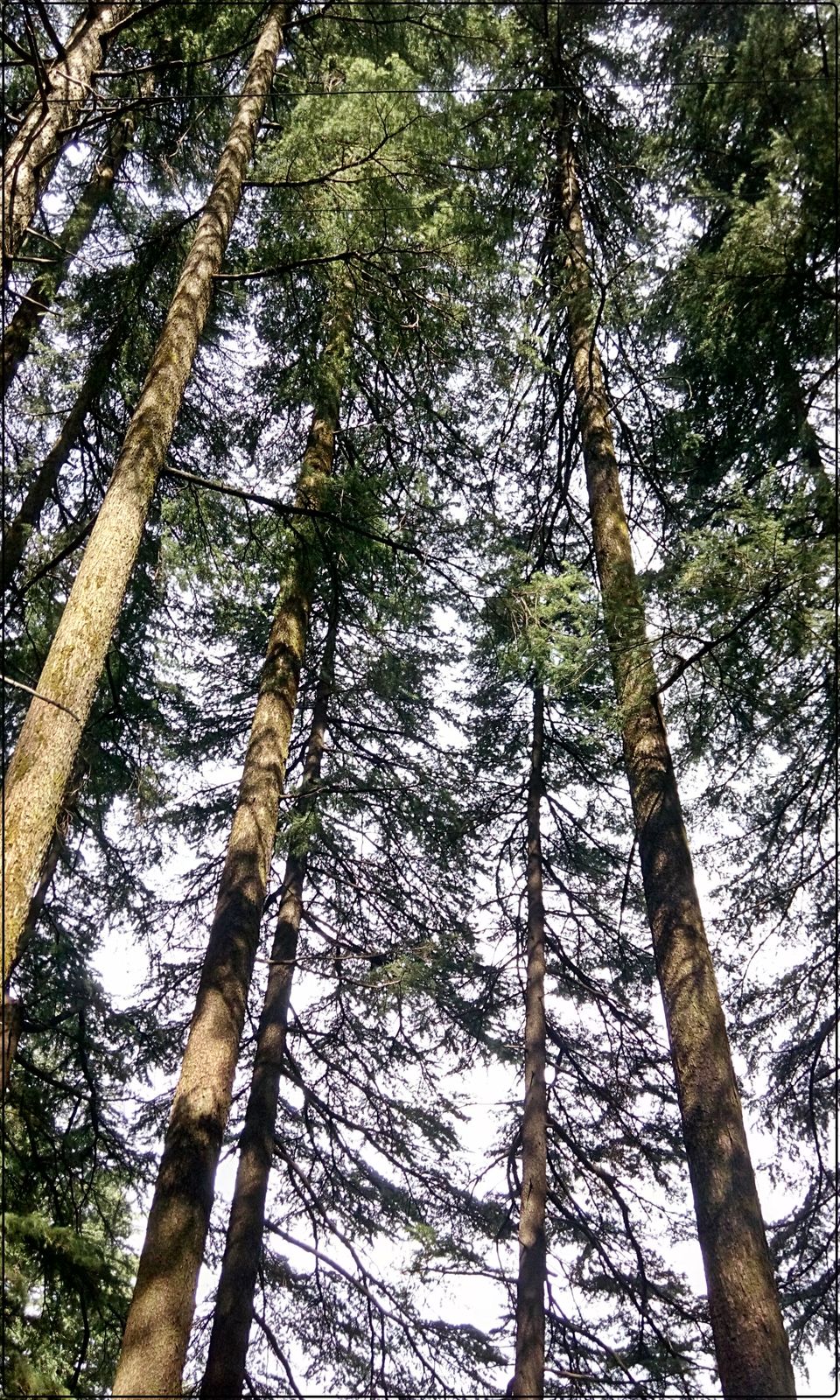 The cottage was one of the few properties of the tiny village of 200 called Bahl, owned by Kishori Lal, aka Pradhan Ji, who also happened to be our guide’s uncle. The tiny cottage, with 5 modest rooms had nothing exclusive to offer, except the surrounding that felt like Heaven, especially when we sat by the stream, our feet numb from the chilly crystal clear water, absorbing the fresh sunlight, clicking photographs to our hearts content (my colleague-turned-roomie made sure she had profile pictures enough to sustain that tiny blue box of her Facebook profile for at least a year) and admiring the peaks of the snow filled tips of the Himalayas. 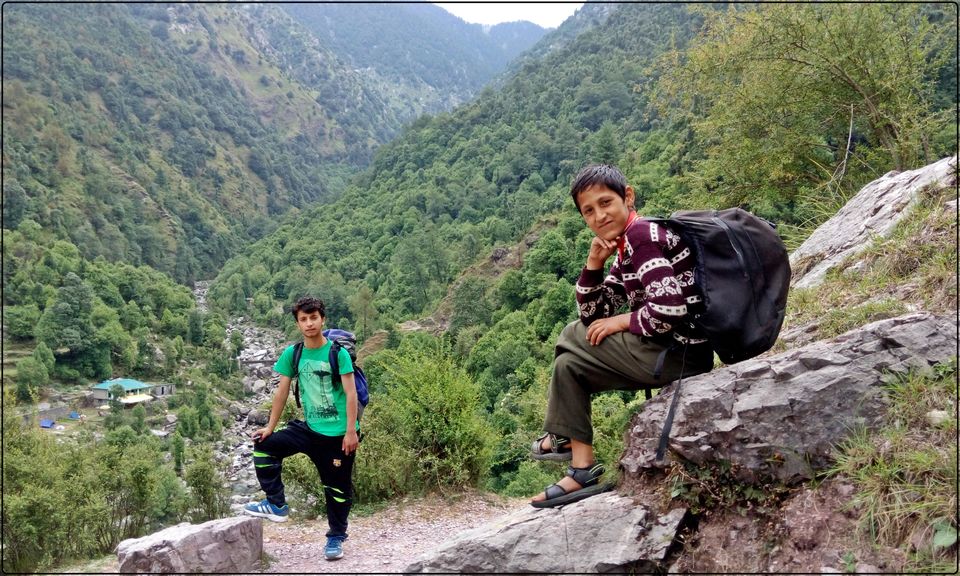 The evening was spent visiting the village and our guide’s family, his girlfriend (at least the exchange of their looks made us guess so) and his plush concrete house among tiny wooden huts. The huge balcony of his house stationed at a cliff gave the breath-taking view of the Kangra Valley on one side, the tip of the Himalayas on one and immaculately done jhum cultivation on the other. A visit to their kitchen brought in memories of social science classes from school when a pictorial representation would explain the lifestyles of the people in Himachal Pradesh. 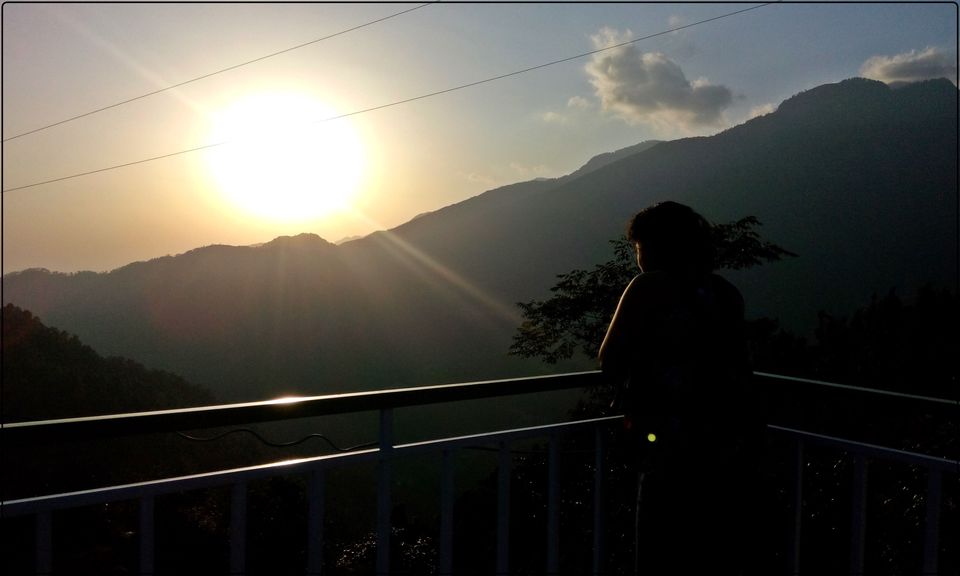 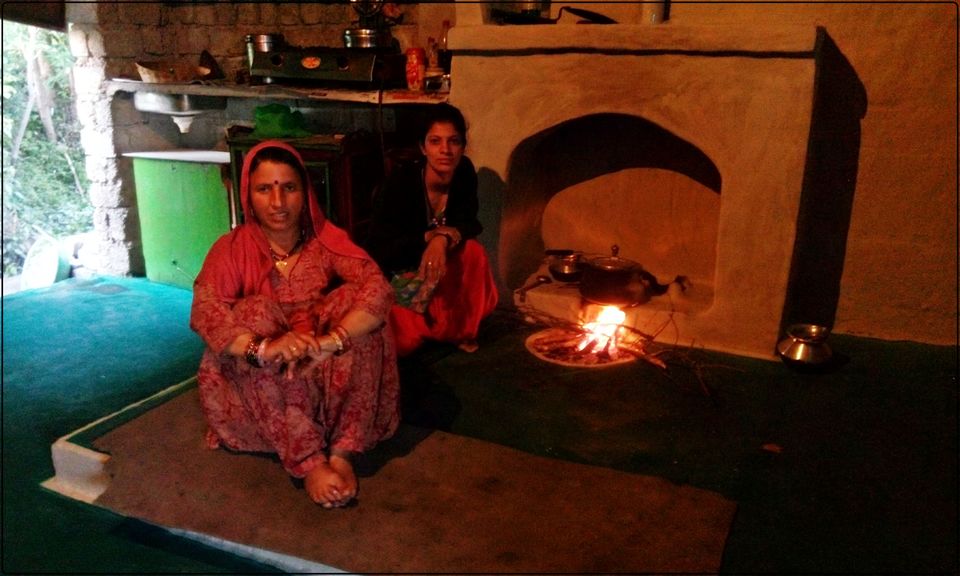 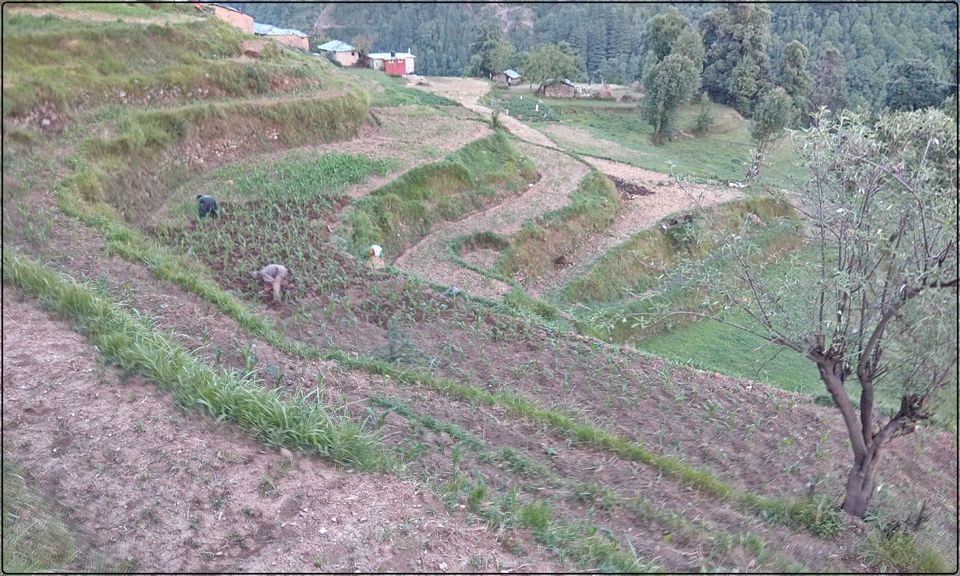 What would you least expect when you are miles away from the din of urban jungles cradled in the lap of nature, where you just have a gazillion of bright stars overheard and the only sound audible is the that of the gushing of water in the stream? The whole purpose of trying to get away from routine life was brutally sabotaged when a group of youngsters, putting up at the cottage too, started playing Honey Singh unabashedly. With hardly anything to say, we decided to conk off for the night and visit a famous temple towards Triund that required two hours of trek and climbing of stairs the following morning. However, the rain played a perfect truant and forced us to rather stay indoor capturing the myriad species of insects found in the area the whole morning until it was time for the return journey.

The only way to reach Mcleodanj from Bahl was to hop into an auto from Naddi. However, as fate would have it, owing to a long traffic jam, we could not convince anyone to drop us and after a hurried visit to the famous Dal Lake and a quick tasteless noodle lunch at nice restaurant decorated in all red and golden to give the Oriental feel, were we also got hold of a copy of the Kangra  Kesari, started marching through the Tibetan establishment towards Mcleodganj.  The most interesting part of the walk other than the beautifully done houses and the gorgeous Tibetan women was a Little Free Library we came across outside a shop. Carved in the shape of a small wooden hut, the library offered a small collection of literature free of cost. This was perhaps one of the best parts of the journey; walking aimlessly, directionless towards the destination. Never in my life did I feel more liberated! The first view of Mcleodganj from behind the pine trees made us jump with ecstasy and following an hour of arduous walk we successfully completed the distance of 30kms. 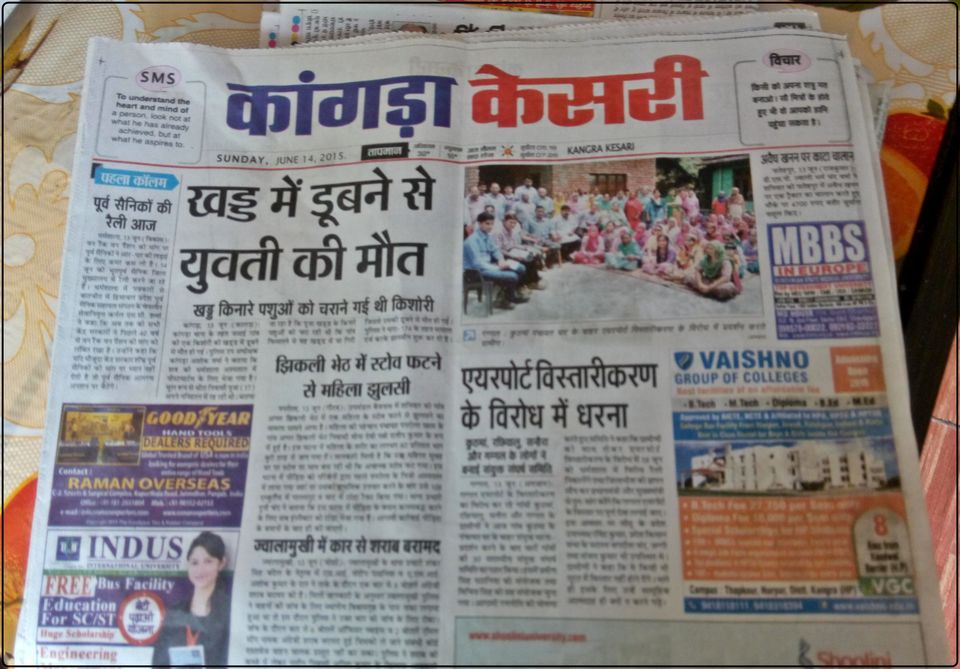 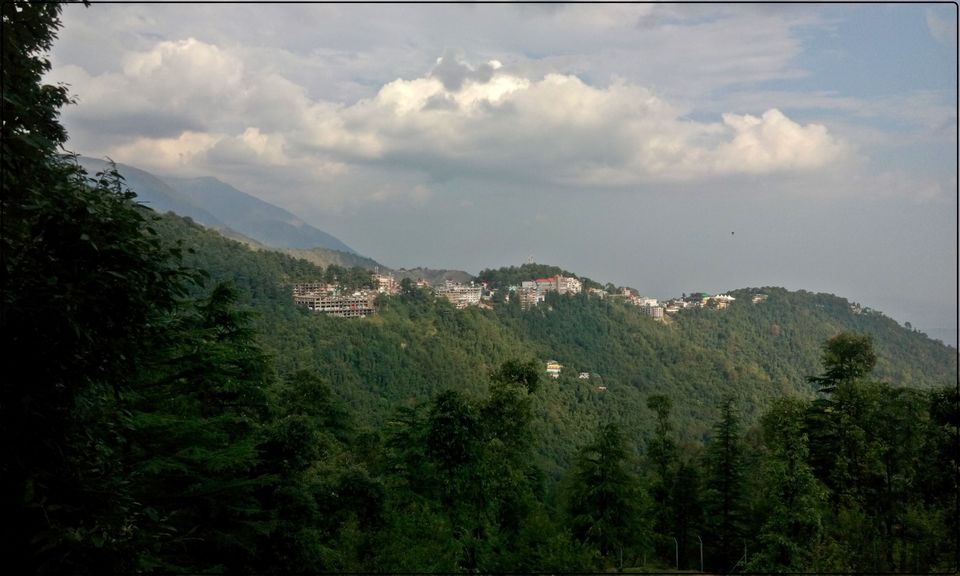 There is something enigmatically beautiful about the markets of hill stations, or maybe I feel so! Monasteries in red, gold and green, brightly lit streets, vibrant pieces of clothes hanging at the shops, singing bowls with intricate designs, the ‘Om Mani Padme Hum’ flags and hand-held prayer wheels, the Dalai Lama temple, chain of restaurants; especially one freshly painted in olive green and Tuscan yellow that played ‘Are you lonesome tonight’, and the ubiquitous presence of Buddha; Mcleodganj, with all its idiosyncrasies, brought me closer, at least for a moment, to a dream I had lately started envisaging-of retiring to the quietude of the hills. However, this time around time played a constraint and before I could even properly delve into the ‘feeling’ of the place, it was time to board the bus and put an end to the two days of merriment. 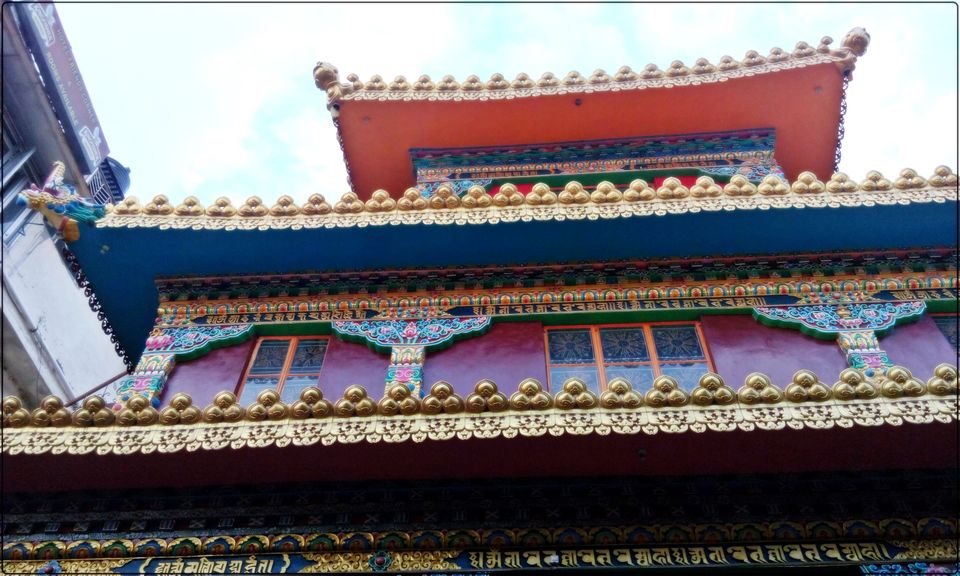 Post Script- I wasn’t Alice and Bahl wasn’t a wonderland. Yet it will remain the most special trip of my life, for the therapeutic feeling I was blessed with. From deciding upon the venue to booking tickets and making arrangements, this was practically the first time I had done it all and successfully accomplished the journey without help and that made it a wonderland for me.

Regret- Even upon insistence of friends, who swore by the dumplings of Mcleodganj, we could not lay our hands even on a single piece of momo there! Hope to get luck another day when I trek to Triund.