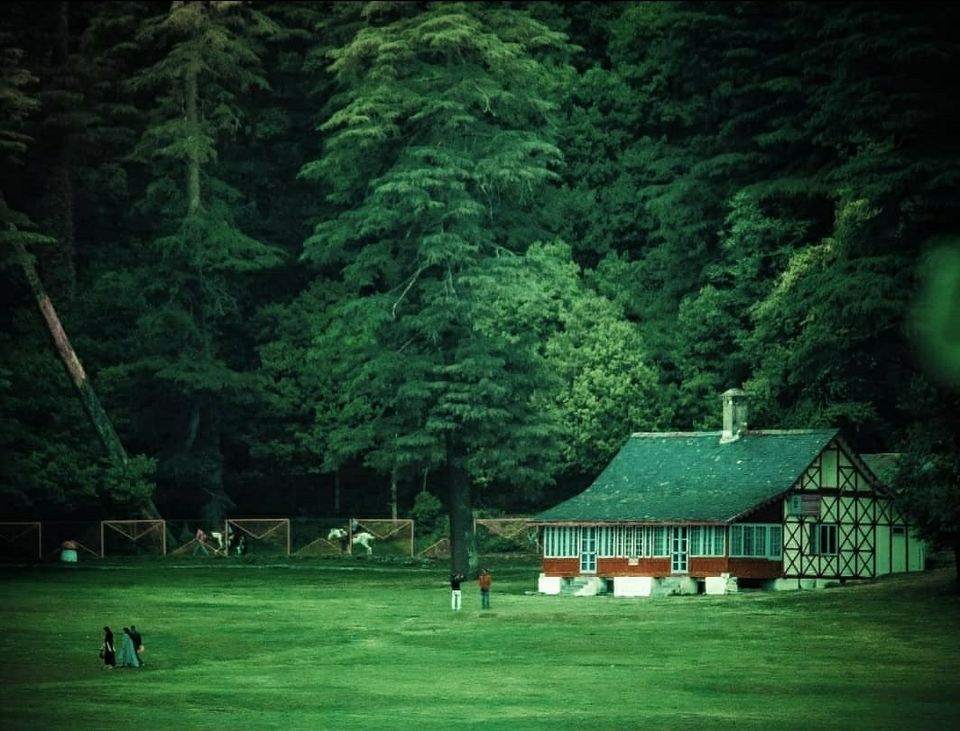 Have you ever been so drained out of your day-to-day activities that you just want to run away to regain your energy even if just for a day? Well, I have faced it many times and hence these weekend getaways are really a special part of my life, so sharing with you all one such experience.

After a week's grill in our respective jobs, me and one of my friends decided to visit Himachal to replenish ourselves. We had earlier decided to leave on Friday night from Delhi and come back on Sunday night but some unplanned work cropped up on Friday so we postponed the travel to Saturday eve.

We were a bit apprehensive as we needed to report back on Monday morning and was not sure how a one day trip will pan out but we needed that trip hence we decided to go with it and decided to go to Dalhousie.

So we finally booked seats in Indo-Canadian Transport Corporation bus on GoIbibo for Saturday night. The bus was a 2/2 A/C Semisleeper and the boarding point was RK Ashram. We reached half an hour early and waited at Indo-Canadian Tpt Corporation office which was equipped with Comfortable Seats, AC and Charging Points. The bus left around 8.30 PM and reached the next day at Dalhousie at around 9 AM.
We also booked the return Ticket for the Sunday night in the same bus by Red Bus App.

The Bus which took us to Dalhousie 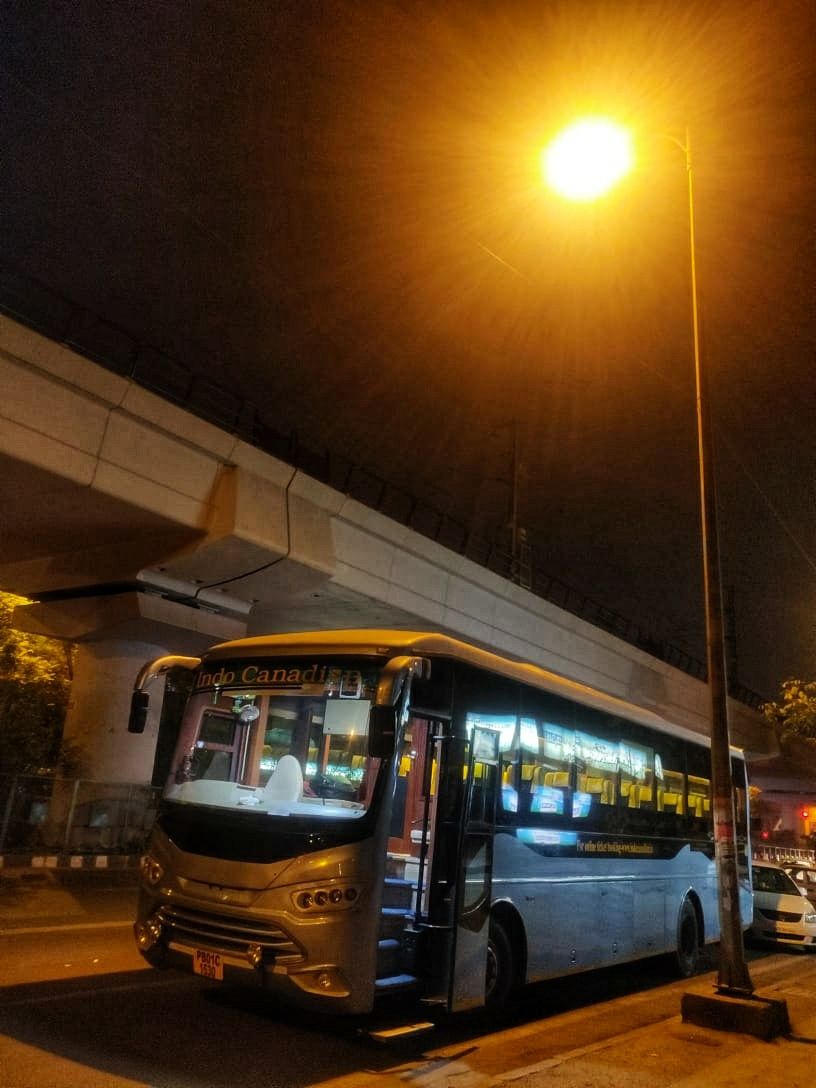 Inside look of the Bus 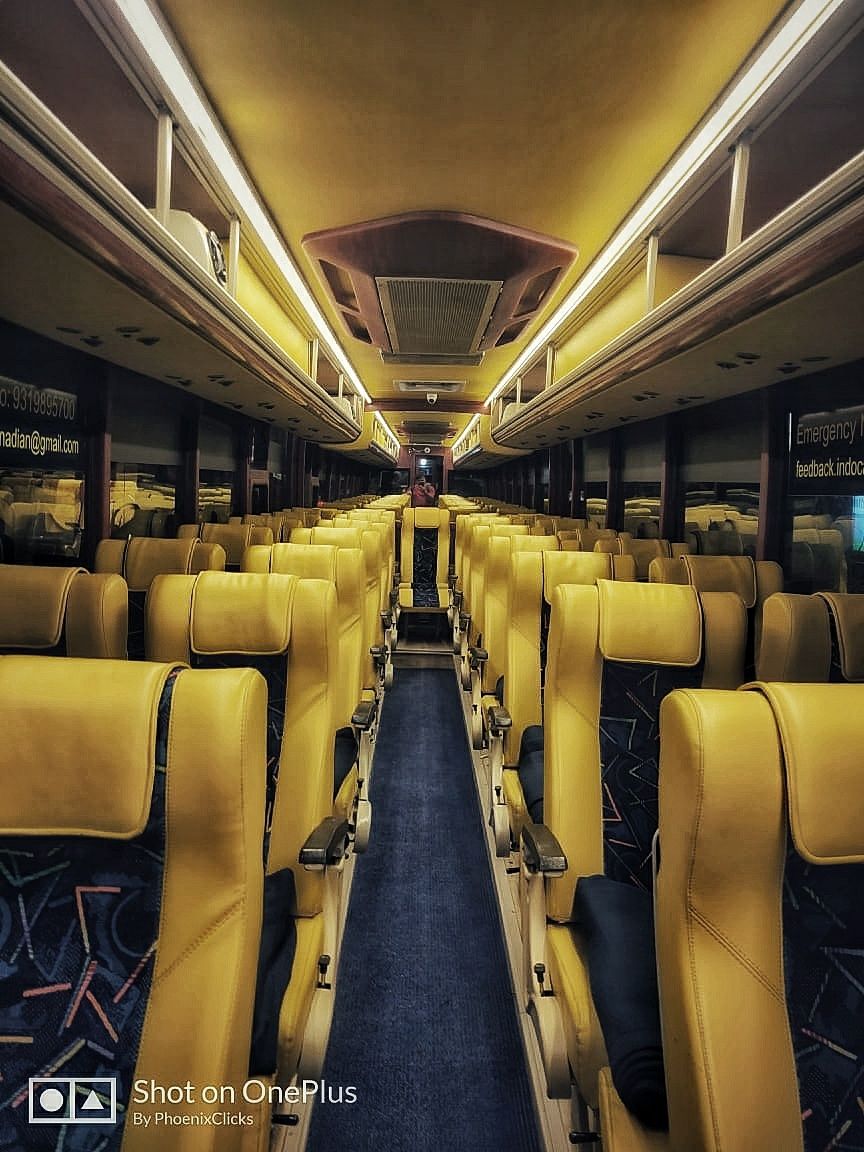 There was one stoppage at Murthal at around 11.30 PM for our dinner and we gorged on the delicious parathas with pickle in the famous 'Haveli' restaurant. Water Bottles are provided by the Bus admin so it was indeed convenient. Also blankets are provided as the bus maintained an ambient AC Temperature.

The bus ride was comfortable enough and we had a quick nap to keep ourself fresh for the next day adventure.

Budget for Day 1 per head:

We reached Dalhousie at around 9 AM. We woke up at around 6 AM and enjoyed the serpentine roads up the mountains along with greenary all around. Also we were able to witness the sunrise peeping from the mountain ranges and the thick foilage. It was indeed a sight to see.

On reaching Dalhousie, we got down at Bus Stand which has a small market beside it. We withdrew cash from a nearby SBI ATM as we were short of it, freshened up in a 'Sulabh Souchalaya' paying Rs 10 each. Although sanitation could have been better at the place but it was doable. We had a quick tea and a breakfast and headed to Taxi Operations Union Office to book a cab which was on the market only. We booked a cab for the daytrip to Khajjiar and Dainkund. We negotiated the price for 1500/- for both these places. As we were returning the very same day in the night, we did not book any hotel although, if you need to stay Zostel, Dalhousie is highly preferred for its location, price and service.

A slight drizzle had already started and we immediatly left for Khajjiar in the Cab.

Breakfast Scenes on way to Dalhousie 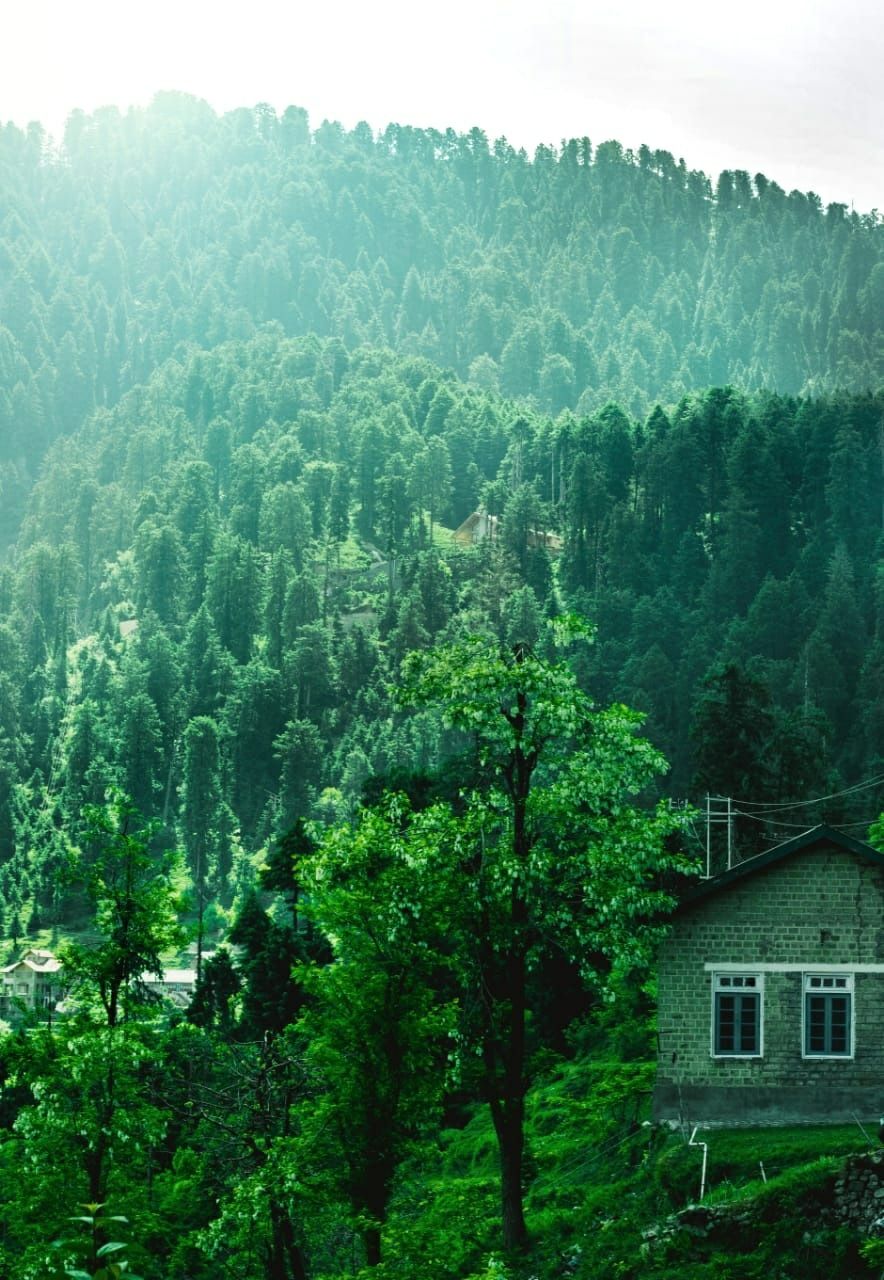 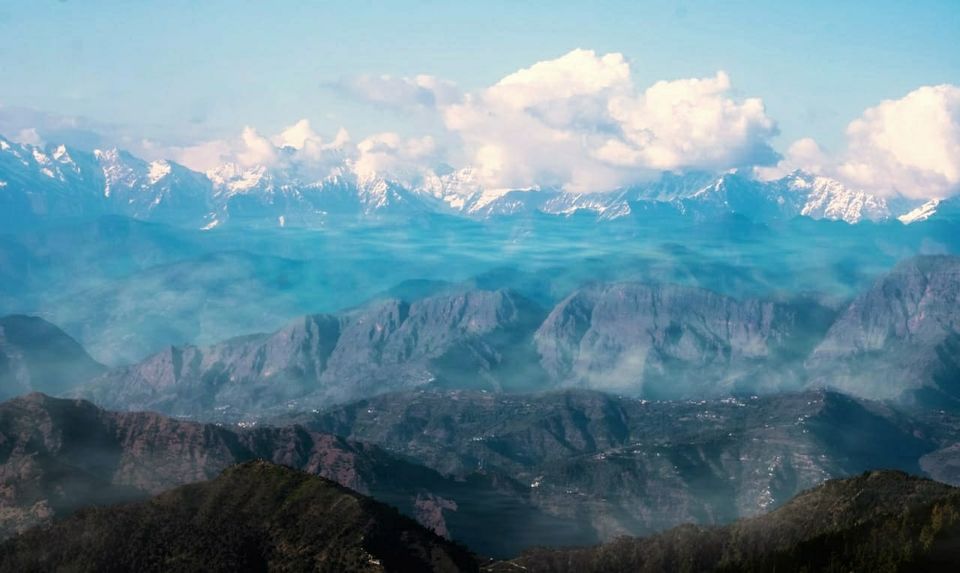 Khajjiar is around 18kms from Dalhousie. The drizzle had turned heavy and it was a magical scene on the way with lush greenary welcoming us.

Khajjiar is called as 'mini-Switzerland' of India. Its a grass-land surrounded by mountains and Cidar forest.
As it was raining number of tourists were less hence we could enjoy the view to the hilt. We clicked quite a few pics and enjoyed another round of tea and bun. We had planned for Paragliding which is quite popular but it was cancelled for the day due to the rain. Nonetheless we spent some serene time there for a couple of hours and then rode towards Dainkund Peak.

A serene time in Khajjiar 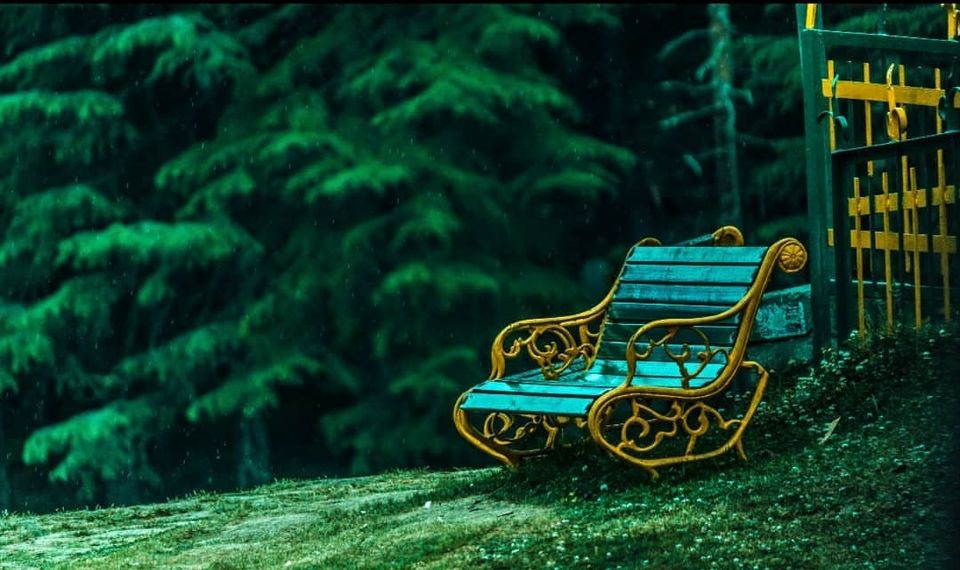 The beauty among the mountains 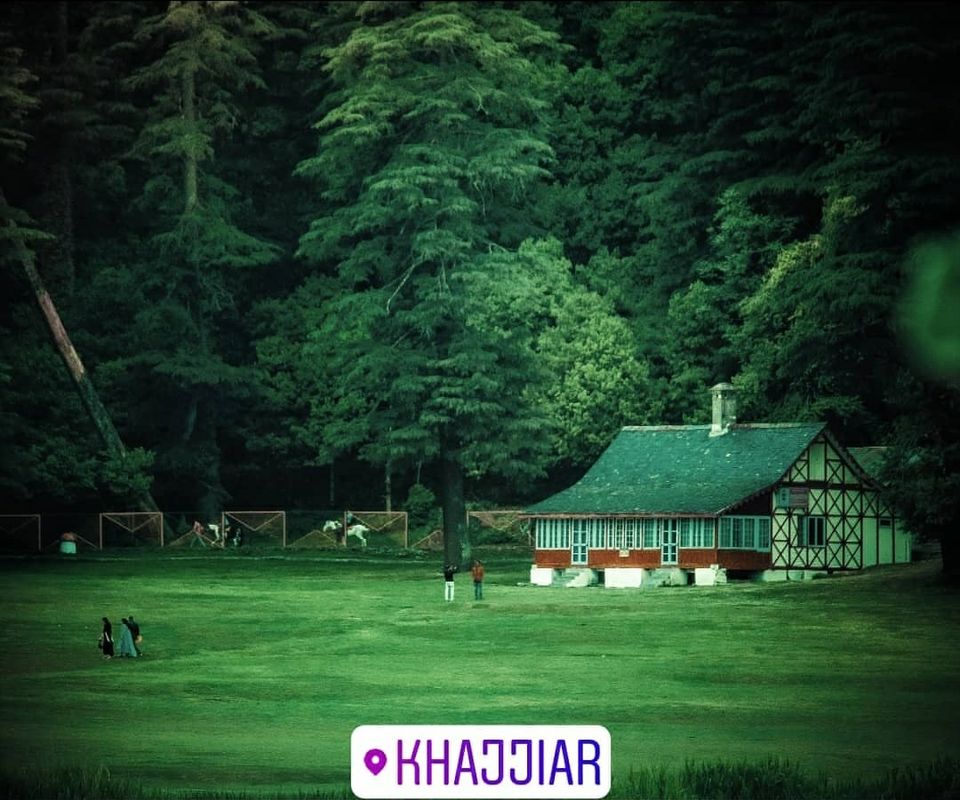 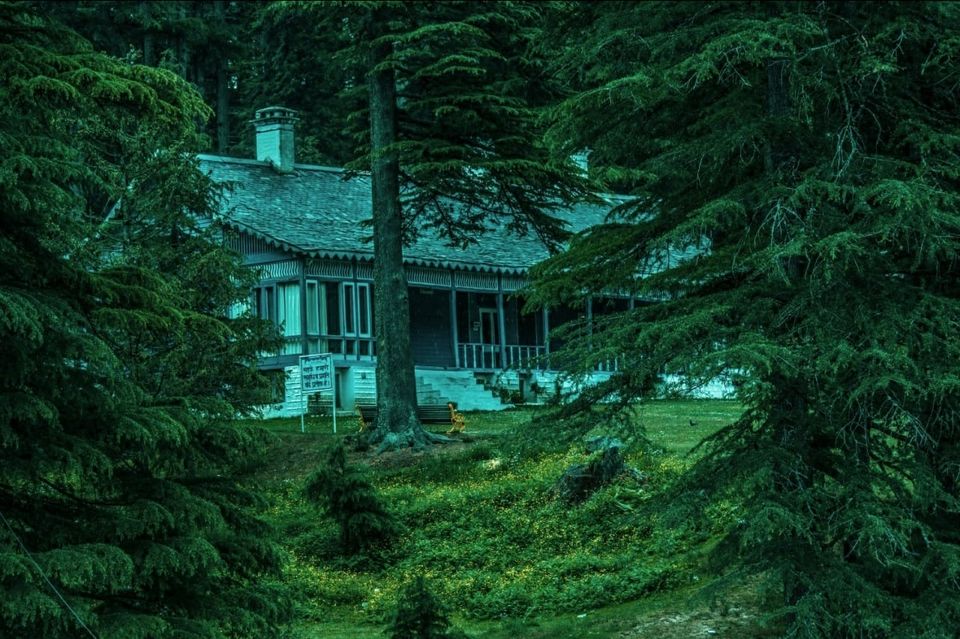 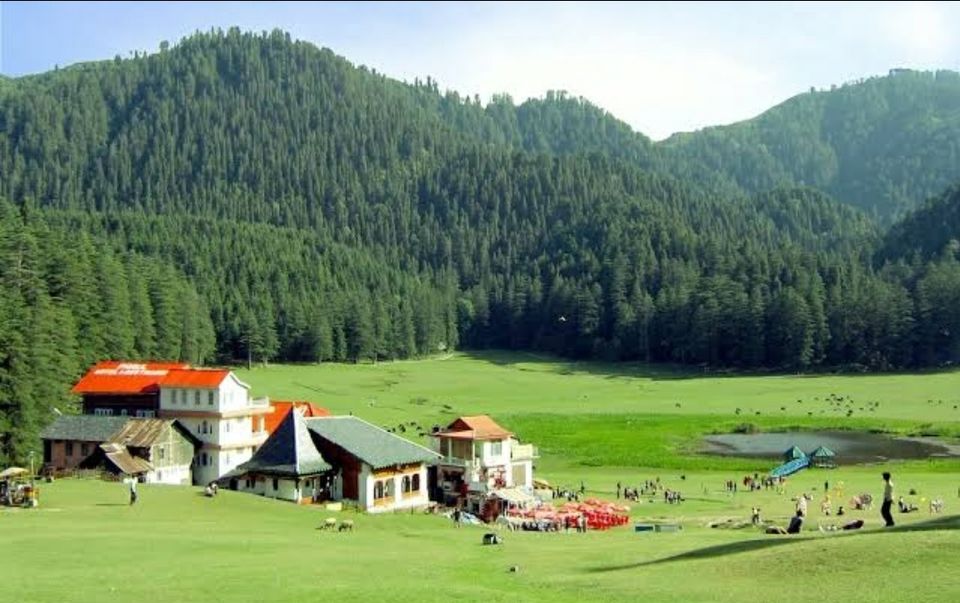 Dainkund Peak is a short treak of around 2 kms and has a Temple at the top with some beautiful panaromic views.

We climbed a bit but came back because the rain had become heavy and we did not have rain gears. Although the surroundings had doubly beautified because of the rain. Post that we headed back to Dalhousie deciding to make a pitstop at Panchpula Waterfall for snacks. 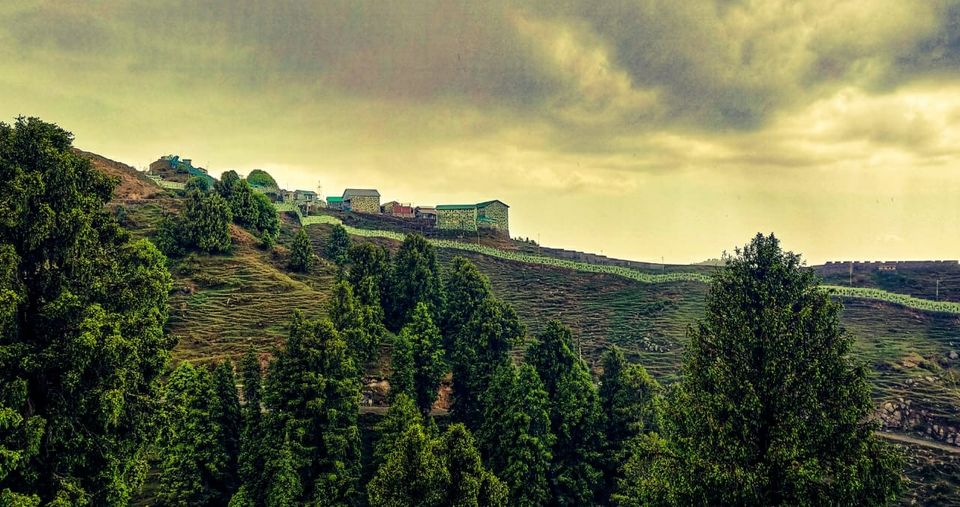 Scene after the Rain 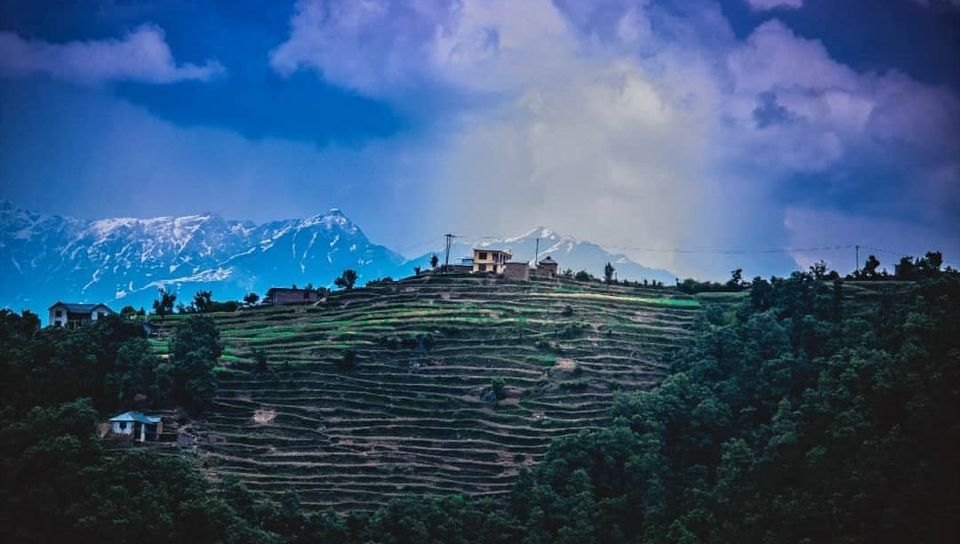 The next stop was a small waterfall named Panchpula. We did not expect a lot from the place but we were in for a surprise.

We had to climb a few stairs to reach the waterfall. The waterfall was a small one but the ambience and the place around it was very serene. The place was dotted with few cafes which offered Maggi, snacks and hokaah! We settled down there for an hour and enjoyed the ambience with Maggi and Hokaah. The price was also very cheap and I would reccomend Shiva Cafe-Chillout if you ever visit there. After spending some time in a reflected mood within the nature we decided to return.

We reached back Dalhousie around 6 PM and had a few hours to kill so decided to visit Gandhi Market so our Cab dropped us there and took his payment.

Gandhi Market is a small local market with shops having all kind of food and memorabilia. The name of the market is justified by two Gandhi Statues at the centre of the Chowk. We ate in a small restaurant named Ravi Cafe near the next chowk named as Subhash Chandra Bose Chowk. One must try out Crispy Chicken and Momos there. It was delicious.

Then we walked down towards the Bus Stand which was about 2 kms from Gandhi Market. We viewed the sunset behind Pir Panjal Range while returning.

We boarded the bus at 8.30 PM. Tired yet replenished. We reached Delhi at 8 AM early Monday morning. This was my first Himachal trip and was not sure whether I would enjoy the hectic schedule as it was just for a day, but I would definitely say, it was worth it.

Budget for Day 2 per head: 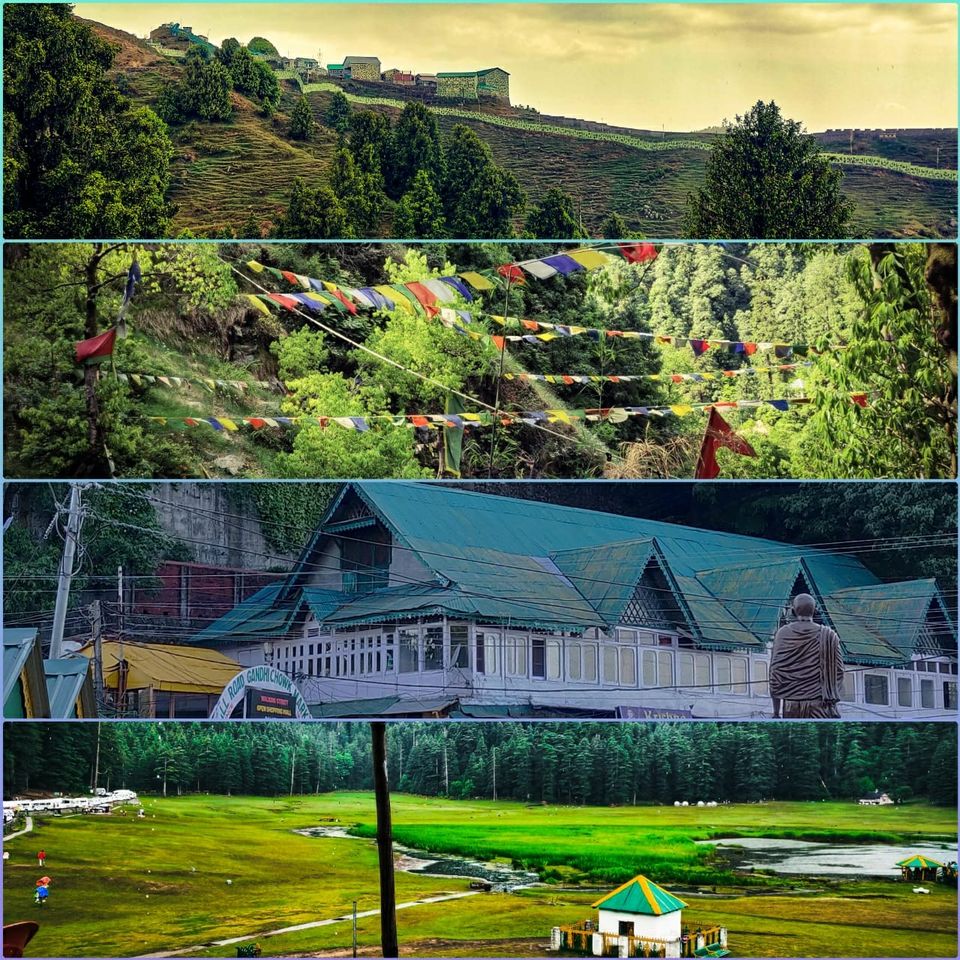 A small Memento from Dalhousie Market 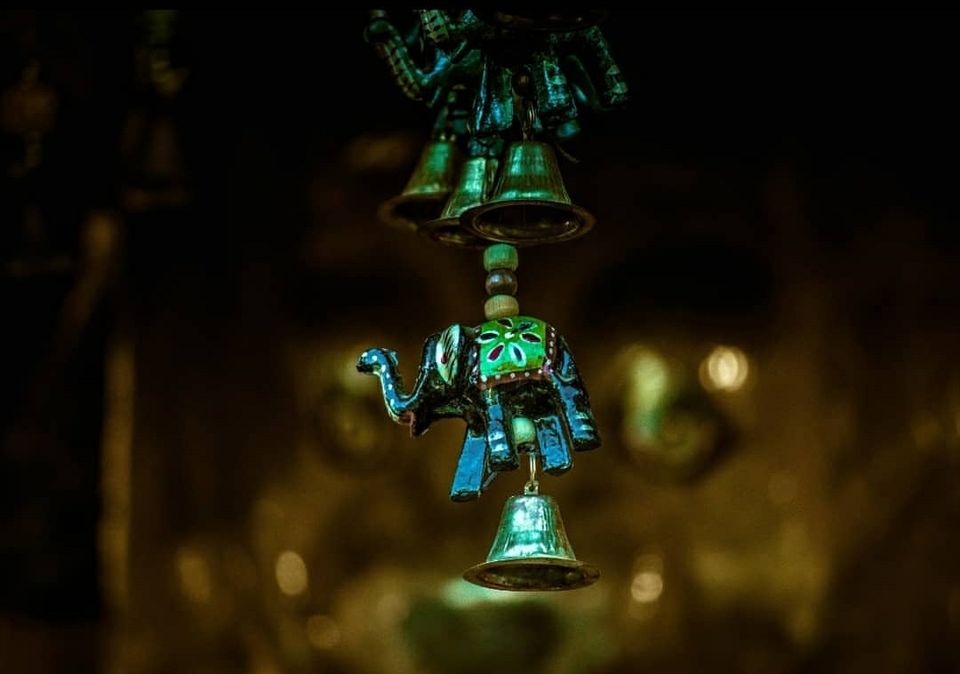 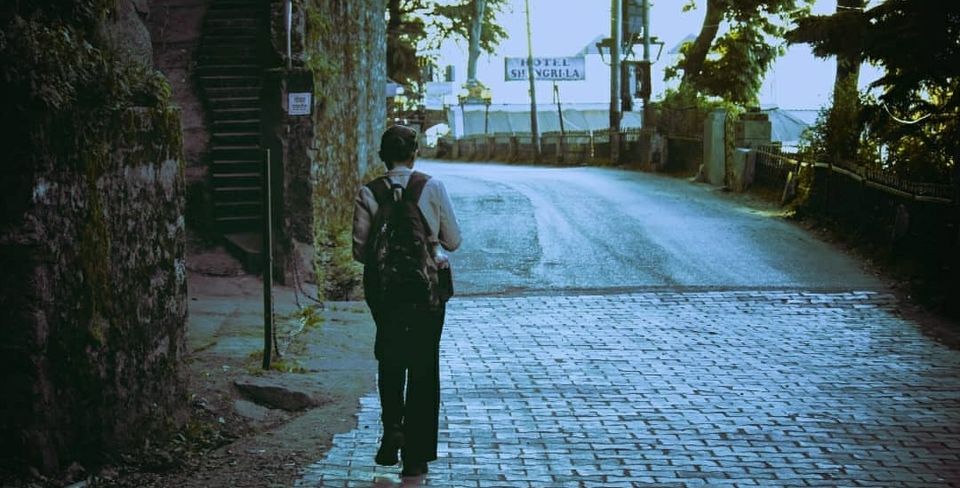 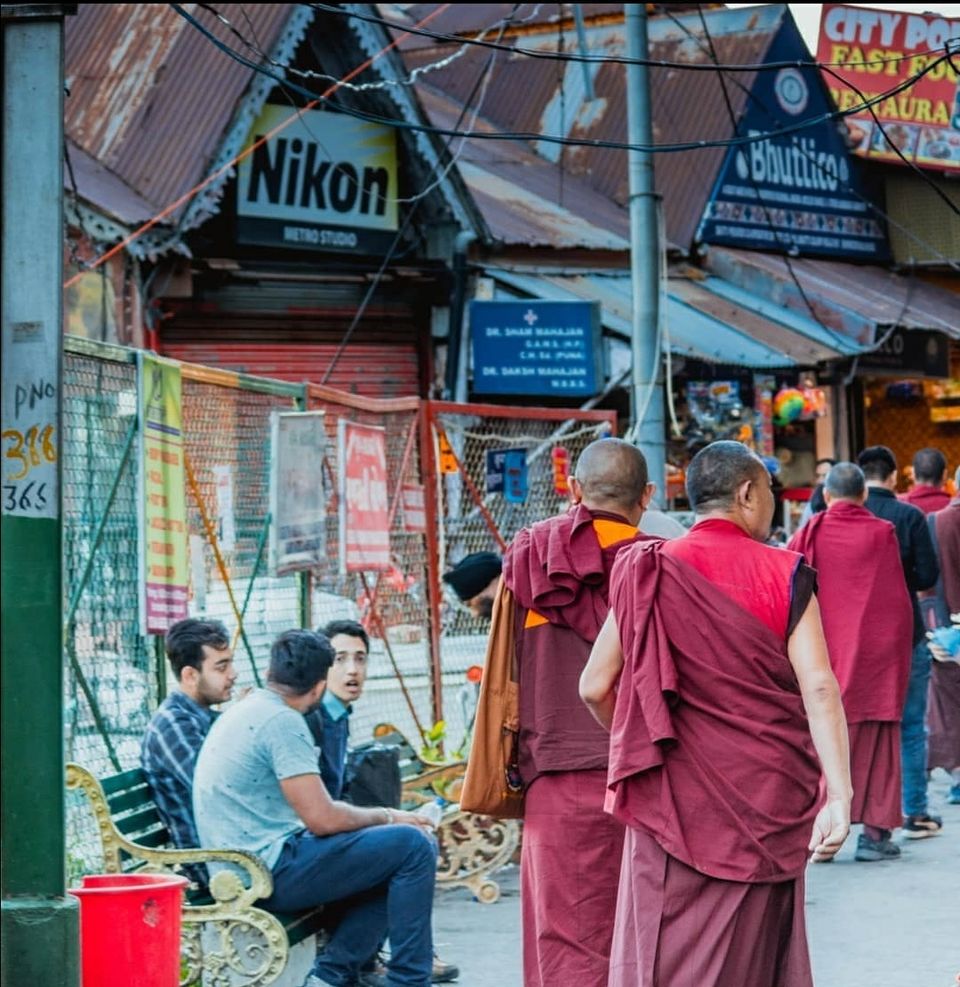 Abode within lap of Nature 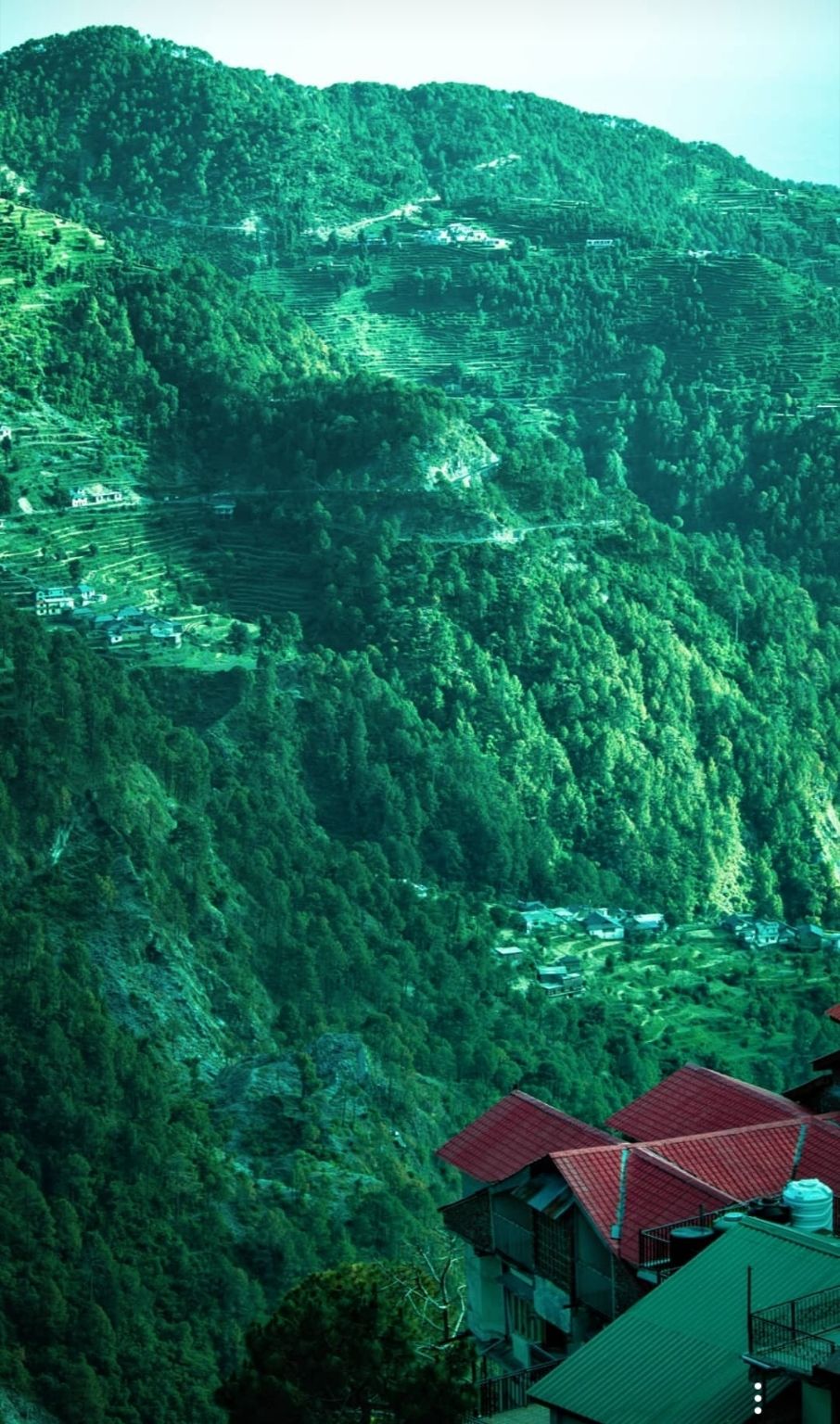