India Travel GuideIndia TripsDelhi To Dudhwa: Wilderness Along The Borders

Delhi to Dudhwa: Wilderness Along the Borders 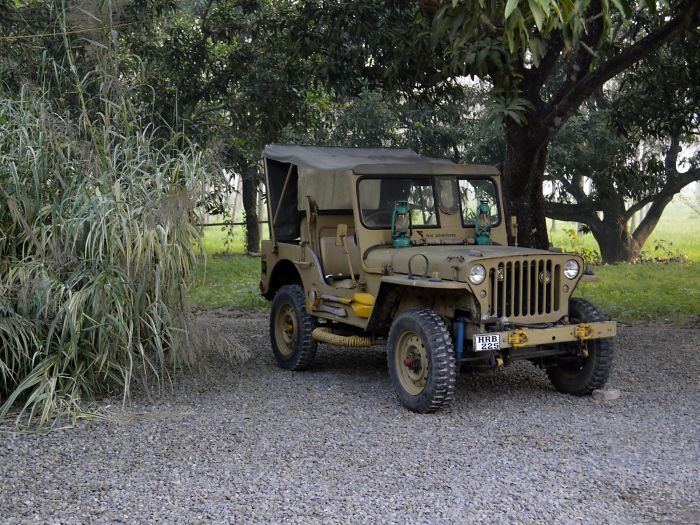 While there is the Jim Corbett National Park in the north, there is the Satpura National Park in Central India. While the Sundarbans are the home to the Royal Bengal tigers in the east, the Gir National Park is the humble abode of the Majestic Asiatic lions. There are many such National Parks dotted all over India, but then there are few lesser known, secluded, untrodden ones waiting to be explored. This trip was on a quest to explore one such national park, the Dudhwa National Park.

Initially a wildlife sanctuary for swamp deer, Dudhwa was declared a National Park with the efforts of, hunter-turned-conservationist, Billy Arjan Singh.

Winter is the perfect time to travel, and for someone staying in Delhi, reaching Dudhwa is not that big a deal. A drive of around nine hours (427 km) would bring you to Dudhwa. Away from the bustle of the capital city to this lush green rural landscape, nestled in the upper reaches of Uttar Pradesh, along the Indo-Nepal border. 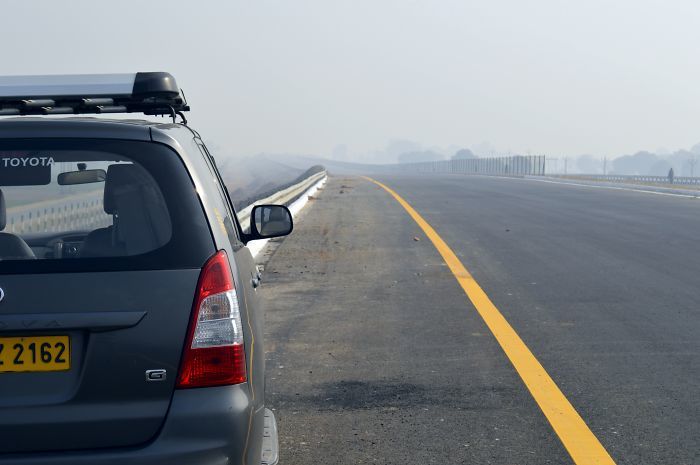 On reaching there, there aren't many but enough lodging options across varied budgets. While the Tiger Rhino Resort would be the one closest to the National Park, the Jaagir Lodge by Tree of Life would be the most luxurious accommodation in the area. 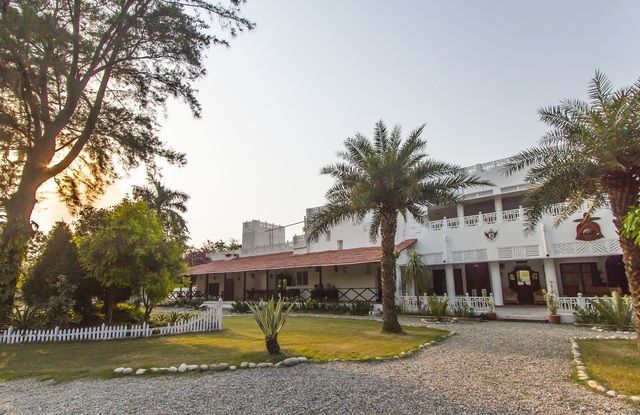 A perfect spot to relax and unwind in a cold winter evening. 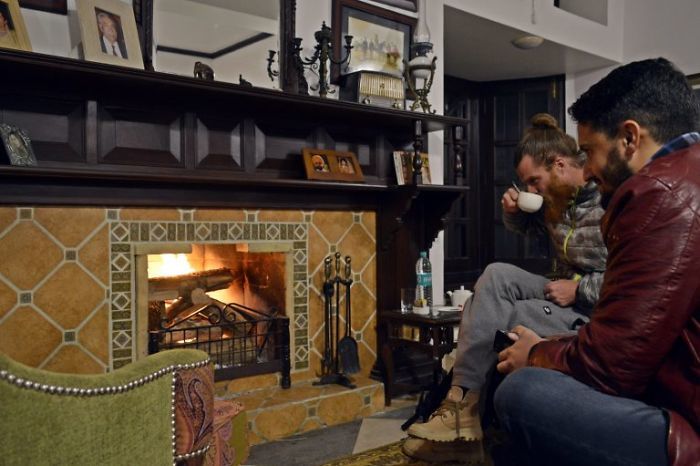 The Jaagir Lodge is a hunting lodge turned resort surrounded by organic farms on all sides. These farms are the main supply sources for the lodge's kitchen. The lodge has all the modern amenities yet has that rustic charm. The vintage radio, the army jeep, the old wooden tables, all add to the charm of the place.

A vintage Philips radio. many such things are used to decorate the lodge giving the visitors that rustic feel. 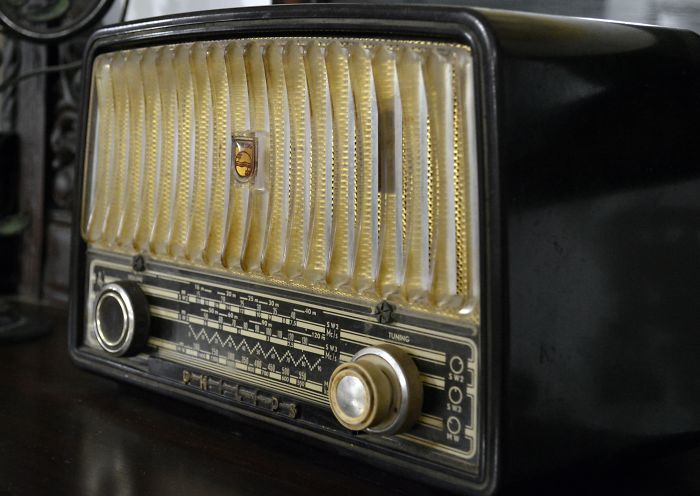 The National Park being the main attraction of Dudhwa, most of the resorts here have their own open-top safari jeeps. You can always drive through the forest region. However, the experience is surreal when you take an elephant ride through the forest region. Now, the elephant ride has two major benefits - firstly, the ride in itself is an experience and secondly, the chances of spotting some of the rarest wildlife increases manifolds. From Rhinos to Giant Squirrels, Dudhwa is the home to a large population of flora and fauna. And, if you're lucky enough, you might just spot a wildcat enjoying a walk in the park somewhere.

A Giant Squirrel. One of the many rare wildlife that you may chance upon in Dudhwa National Park. 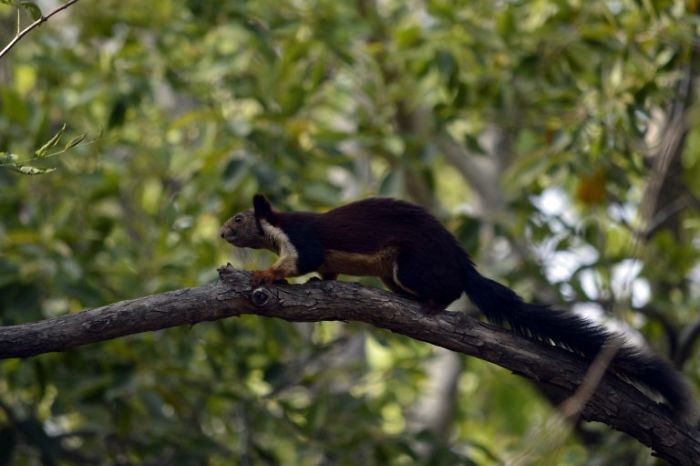 Basking the warm sunlight by a pond were these crocodiles. 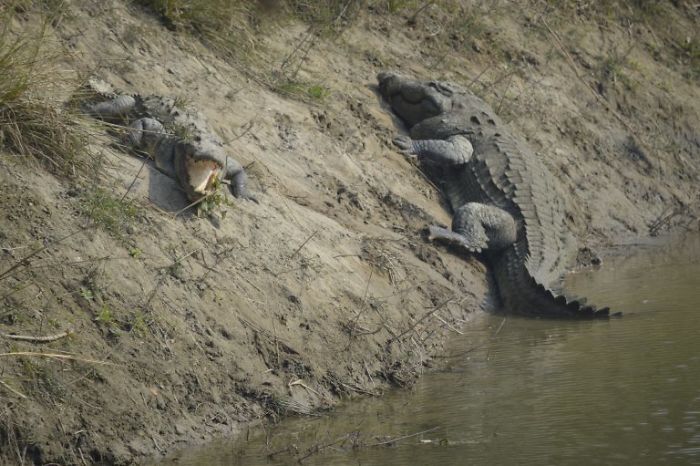 While the chances of sightings are not as good if you drive, but the roads are mesmerizing. With tall termite mounds on either side of the road, the tall canopies create an arch over the road with rays of sunshine peeking through them.

The drive through the park was serene. The extremely loud silence was just disturbed by the sweet chirrups of the birds. 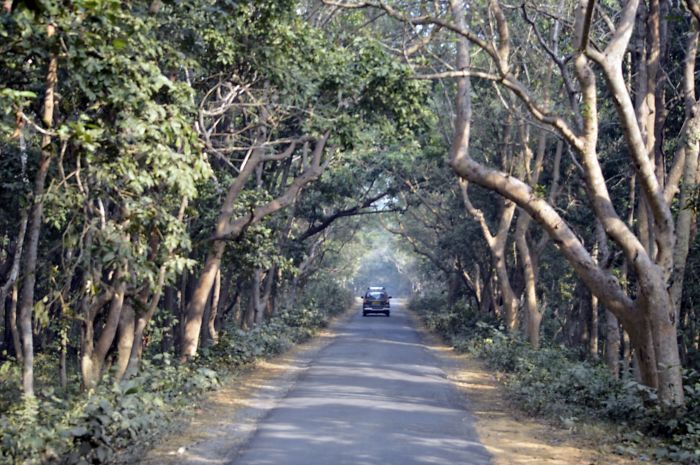 Some of these termite mounds were as high as 6ft! 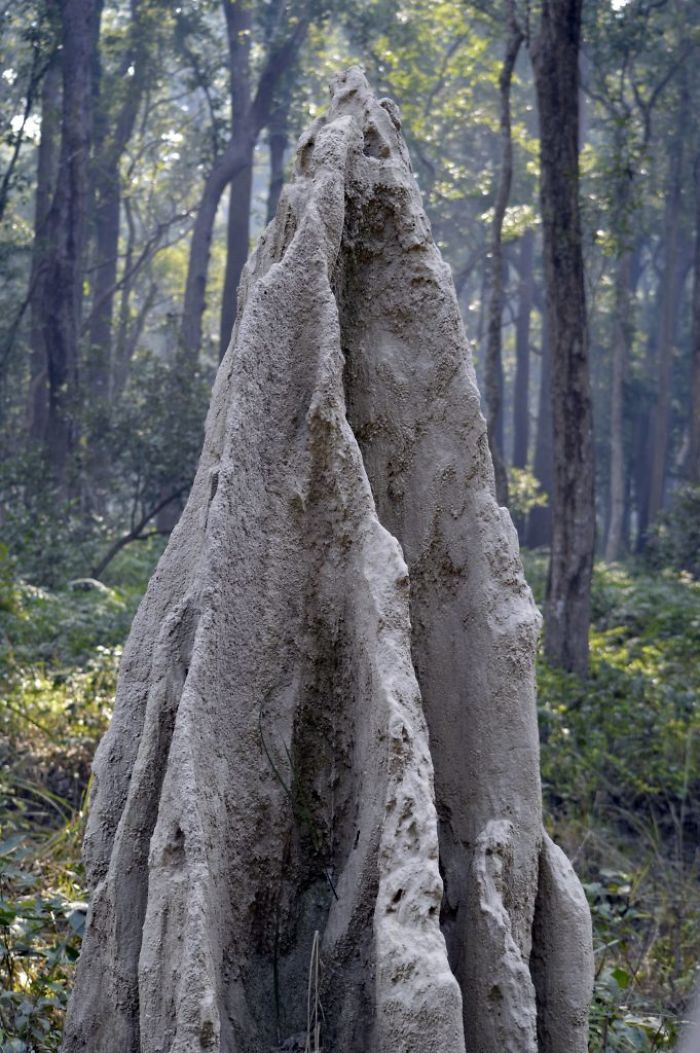 The Indo-Nepal border isn't much far away from the jungle town. A short drive of about an hour (55 km) and you would be at the Dhangadhi Border check-post. For Indians, any identification proof is good enough, however, a foreign national would be required to produce their Visa and passport before crossing. 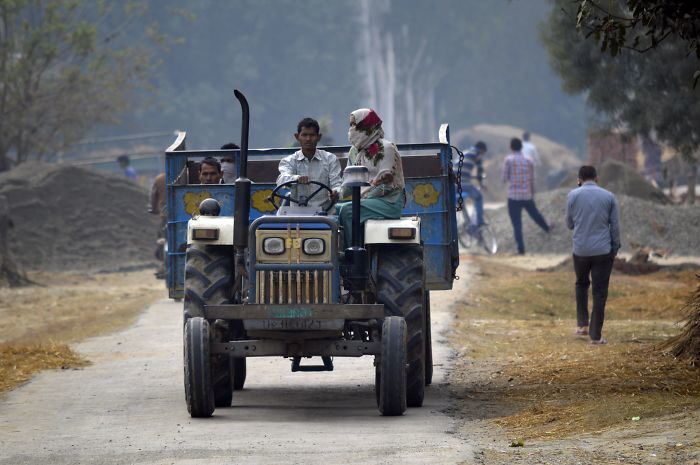 On the other side is a quaint village, resided by the Tharu tribes. The cleanliness of the village and the warmth and hospitality of the villagers is something that would surely leave you awestruck.

One of the mud houses in the Tharu village in Nepal 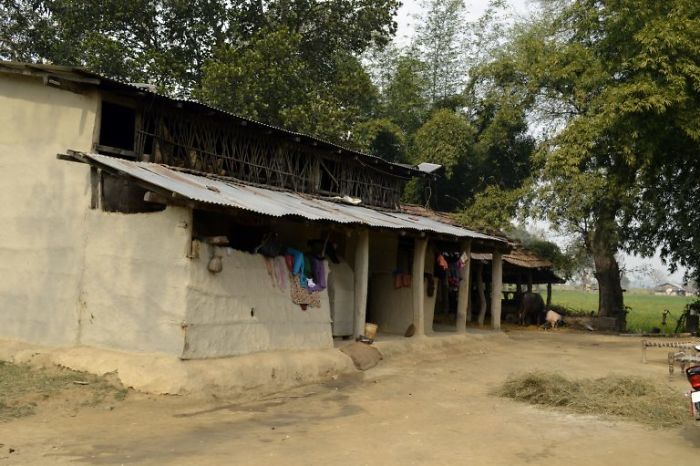 As we were walking around the village interacting with the villagers, the people there were kind enough to invite us to their home and offered us Sakhi (a homemade drink made of fermented rice). 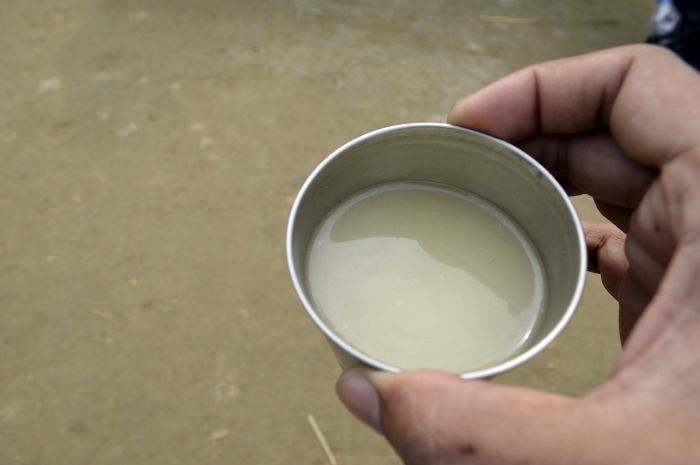 While you can always go to Ranthambhore or Jim Corbett, this place is all of it less the crowd. Dudhwa is a perfect destination for a quiet and secluded family vacation. This trip offers you the best of all the worlds. A nice road-trip, a natural escapade and a chance to know how life is on the other side of the barbed wires.