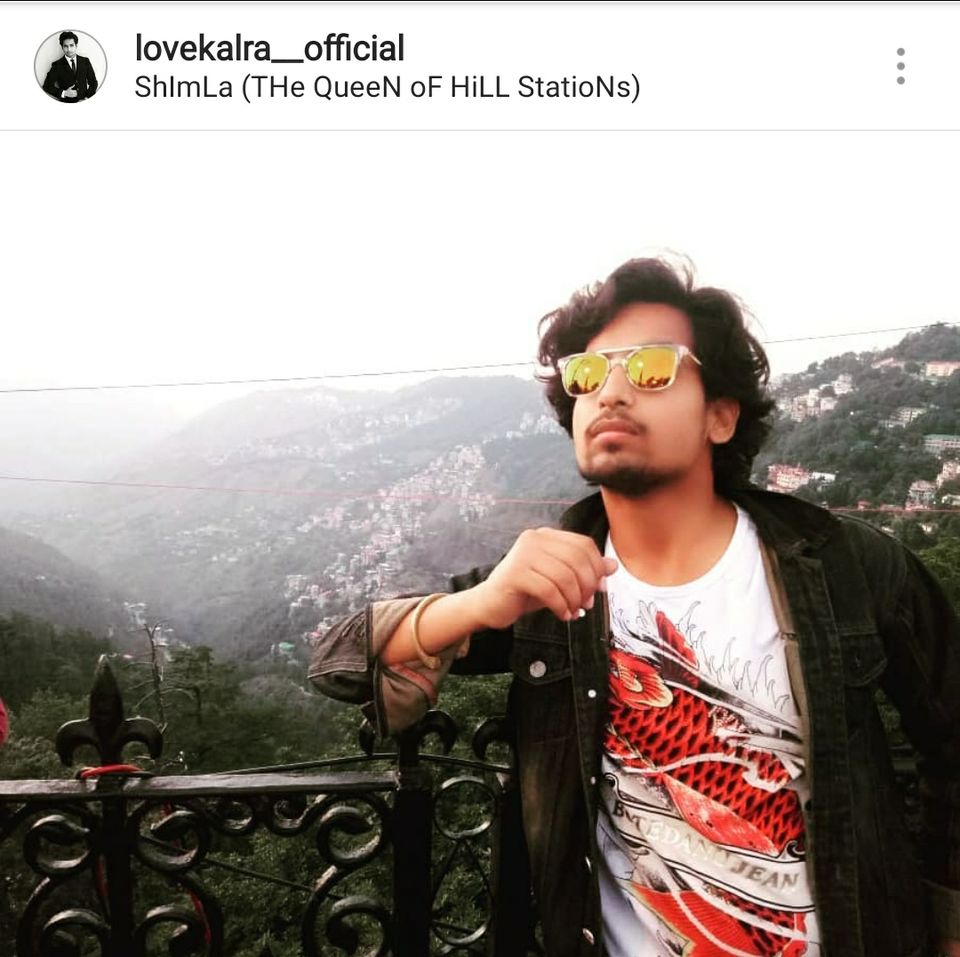 It was the time of extreme hot summer's  night 🌙⏰💤💤 , we three friends 👭👬👫 was drinking 🍻 , having fun, slowly - slowly as night was passing our drinks were taking us from out of the world,  it was 11:18  pm suddenly the topic was started of the mountains and trips ,  and then we suddenly plan trip to shimla . Trip was started from saket , south delhi  we group of three friends was packed with our jackets from home only, it was the hot day , everyone was looking us on 🔛 the road as we were intoxicated wearing 👒👚👖 the jackets, within few minutes our cab was arrived at the pickup location and took us to kashmere gate bus stand of delhi, from there we got the bus to Chandigarh, as the direct bus to shimla was at 4 am in the morning, we thought it would be better to go Chandigarh first and then to shimla, there is the couple of buses going to the Chandigarh but direct bus from दिल्ली to shimla are very less and the ticket from दिल्ली to Chandigarh.

Around 1 am of the another day ☀ bus start moving, the earlier day itenerary was quite small . Around 4 am we got the halt at karnal bus stand for the coffee and snacks and around 8 am we reached to chandigarh bus stand, from there we need to go to new bus stand which is located in sector -satara, as we  get off the bus one of the auto  driver approached us and he  was trying to loot us on the basis of our next step towards to shimla because we need to catch the bus which was only available at sector - satara, so please dont come in the influence of those people roaming around, catch the bus directly from that bus stand to the sector - 17 for the bus from chandigarh to shimla

After reaching to the sector- 17 , what we saw there, long queue of the travellers here and there, it was very hosh posh, after the long waiting of around 2 hours we got our tickets to shimla and it cost us around 400 each for a seat , its better to book the tickets in advance if uh want to save your time .

Around 11 am our bus bus was started, we guys were enjoying by listening music, having good chit chats with each other , it was going to be long journey , one hour passed away bus took a halt of 15 mins we refreshed ourselves after then half an hour few peoples came inside the bus among them there was an old men  who came alot those peoples, he  did not got the seat the sit, I offered mg seat to an old person,  he  claimed to get off the bus after an hour, but it was more then one hour i have been standing, i did not asked him to get up and give the seat but he  himself was telling to get off after half hour but he lied , i was badly tired while standing because i did not slept since last day , we did not disturbed unlce for our seat, but my freind got up for me and offered me the seat and then uncle finally get off at SOLAN district, and i got my seat and got the proper rest after long time, we freinds were laughing together, saying how it has happened how we made plan to shimla, just after quite good drinking, haha 😄 , the picture below depicting the scenario of solan hills.

Around 2  PM of the same day we reached to the shimla new bus stand ,  took the little rest ate there , few eateries as kadi ( indian cuisine made from buttermilk) and rajma (kidney beans) are very common available on all live restaurants, even we ate there kadi rajma roti and chawal, which was our first meal in shimla, the restaurant owner was quite humble person,  serves us so nicely talked well, he also did little mimics of the bollywood artists 😄 which was quite funny later on after 40 mins . 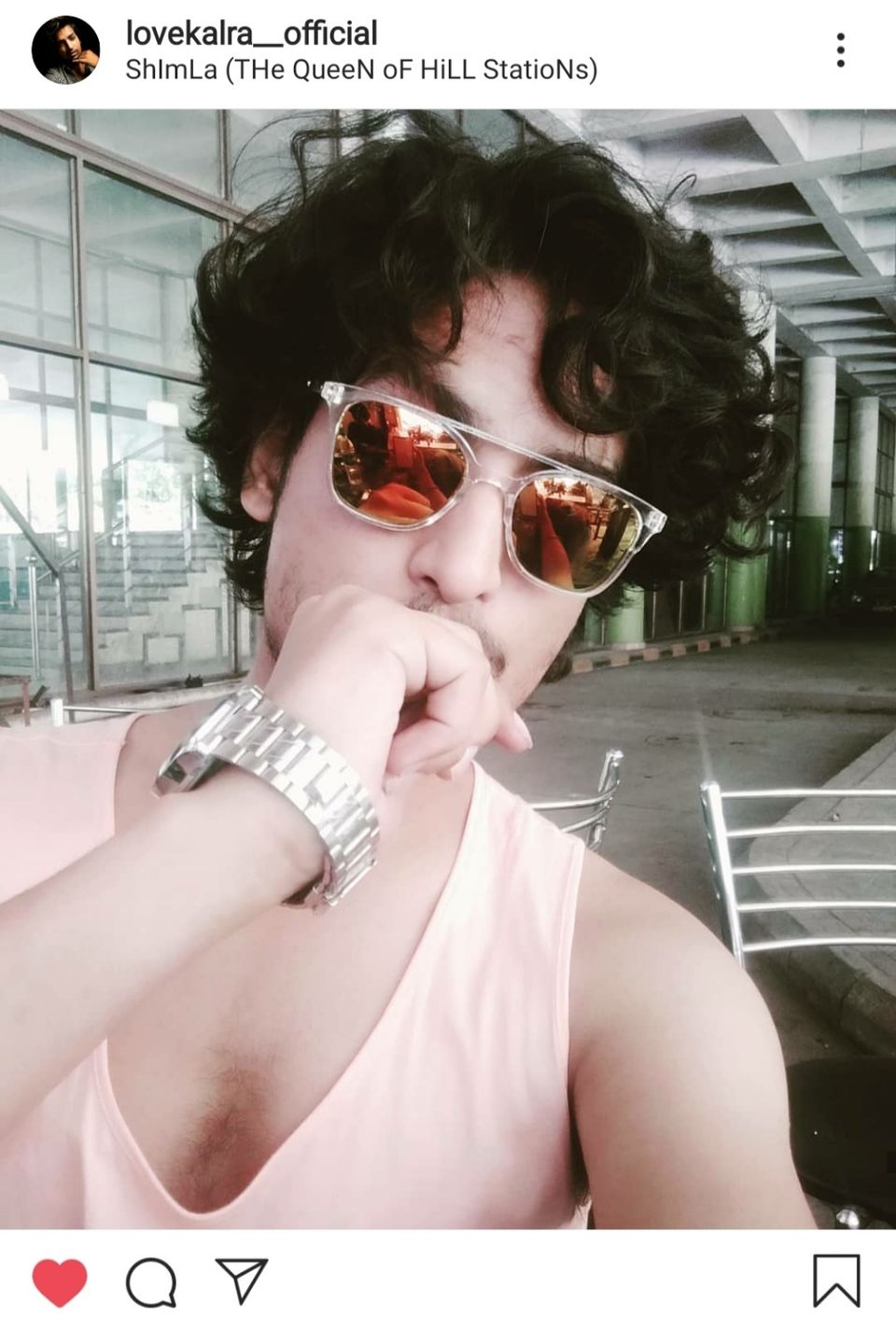 We took the local bus from new bus stand to old bus stand, our hotel was in between of them around 700 metres before old bus stand, the funny moment happens that we need to get off the bus when google map was showing its been 700 metres, i misunderstood and thought it is 700 more by bus but later we found ourselves 2.5 km away from the hotel haha 😄, and then we caught the bus from old bus stand to new bus stand and my google directions were on and following through, we managed to reach at hotel ,the bus through which we were travelling, was 100 percent electric and the picture depicting the inside view of electric bus, even camera was fitted inside the electric bus . 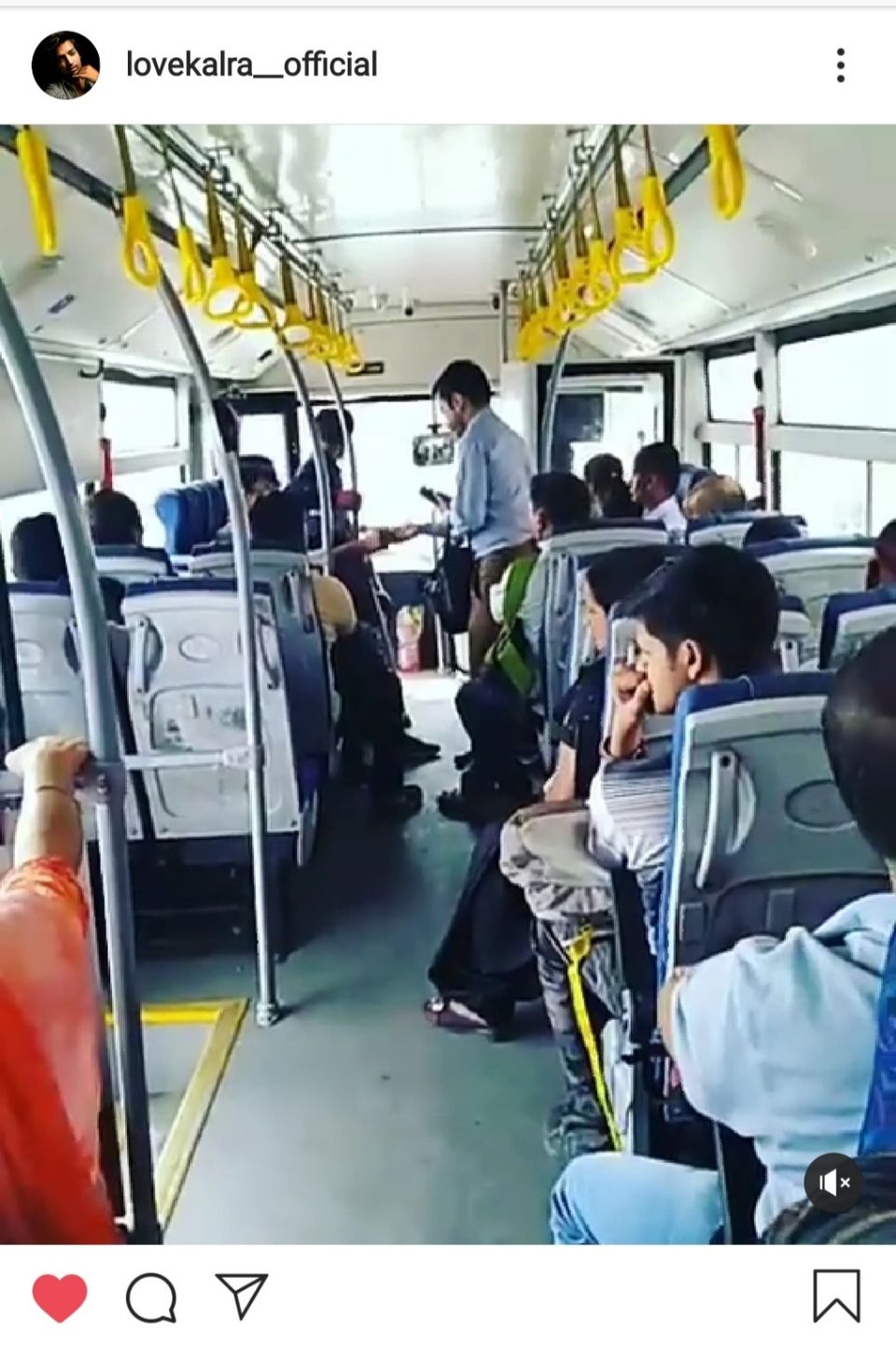 As i saw hotel room is around 700 metres away from our connecting roads directions then we get off the bus 😶 , trekking dowm and down, 700 metres walk is also quite hectic in the mountains, walking walking for about 10 mins, we reached to our wonderful hotel, The Shimla view hotel , it is quite great property, the charge for one day was around 1100 inr, the view was very awesome from there, i have shot few pictures, one of them i m showing below . 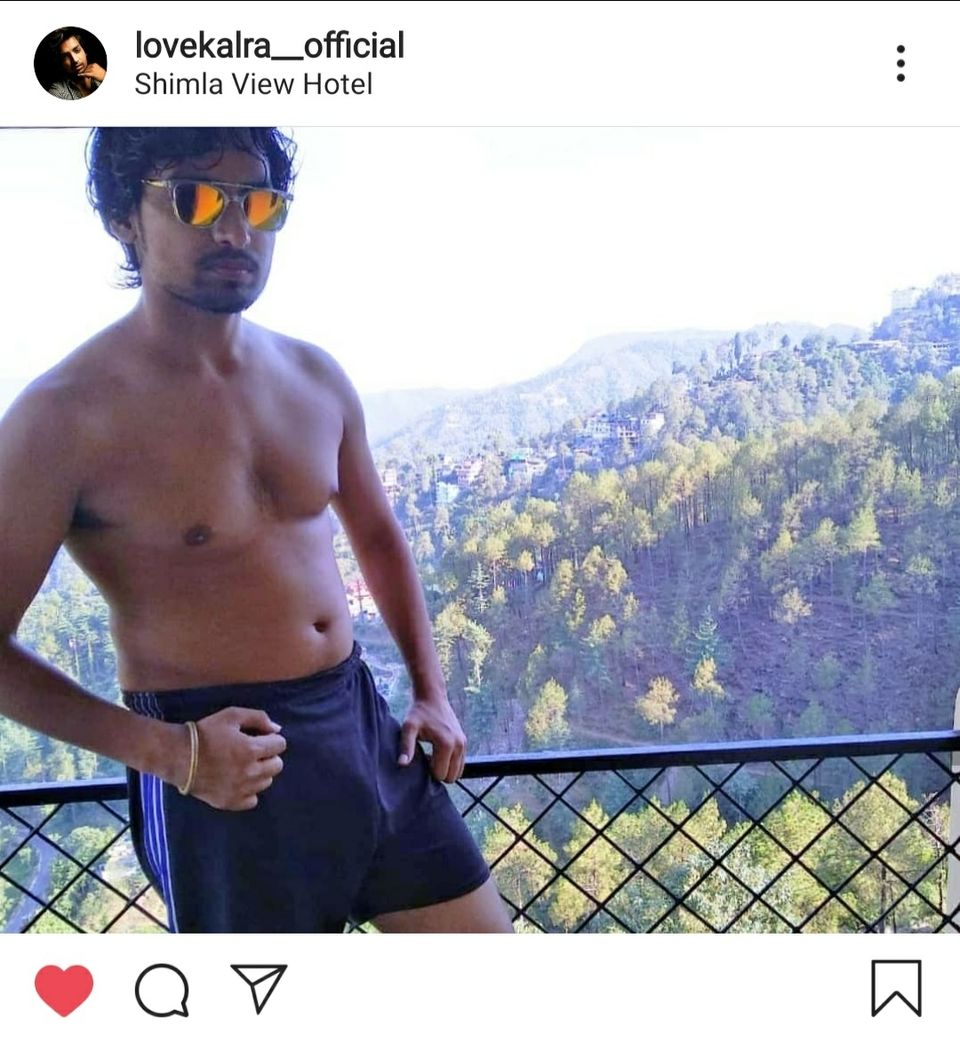 One of my freind was in quite hurry position, pushing us to get ready get ready, in the same time asking us to have photos together such a  studio guy, we have lots of photographs together, shot video which i will show in my video blog, i act like srk 🤑💪 in that video, dont take it me as fishing myself just telling about that and applied the music as janam janam saath tera 😊 while having pics and videos we saw the time it was around 3 :30 PM, we started getting ready, we all were ready in our wonderful dress and routed out from the hotel around 4:10 PM , while walking up on our to the main road we had several vidoes and photos shot, after 25 mins we saw oursleves on the main road, from there we trekked to the mall road , it was lovely weather all around, there was peace in the atmosphere weather so clear, temperature was around 21 degree clecius, our plan was to head  towards the mall road , we were walking and enjoying the weather of shimla , the picture below dipcting the view of shimla at june  27 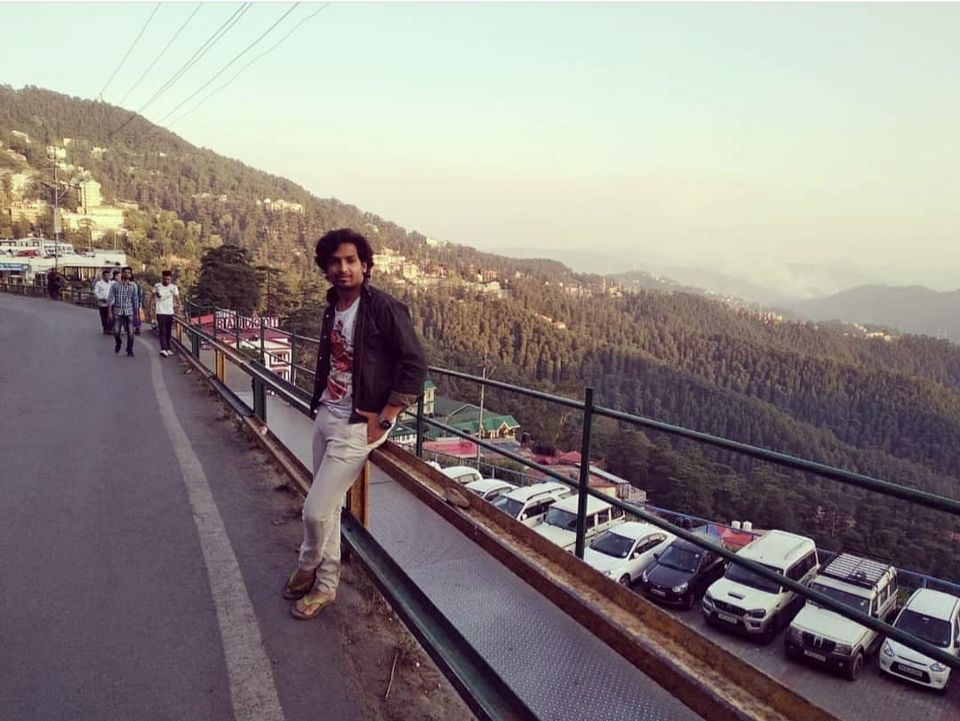 After covering the main road of shimla, there was the 2 Or 3 different ways for the malli road, we caught the shortest among and start walking upside path followed through stairs and complicated mini streets as its common in the mountains,  we saw the different shops  of selling interesting goods, on our way  , we also faced the vegetable market on our way  and several wine shop, no mountains trip is completed without the wine, so for you will fund several shops  with the rate list displayed well inside Or outside of the shops , our mouth was watering while walking and seeing the wine shops  around but were stopping ourselves not to buy, we opted for the party at night, as we were walking along the mall road, there was the nice building to have the pics, it was very attractive, it resembled us the view like foreign country buildings and the lightening , we had several pics over there, one of the studio a friend was disturbing the other one for his several shots in the single manner, he was disappointed from him at that time. The picture below will show you guys the place looking like foreign environment . 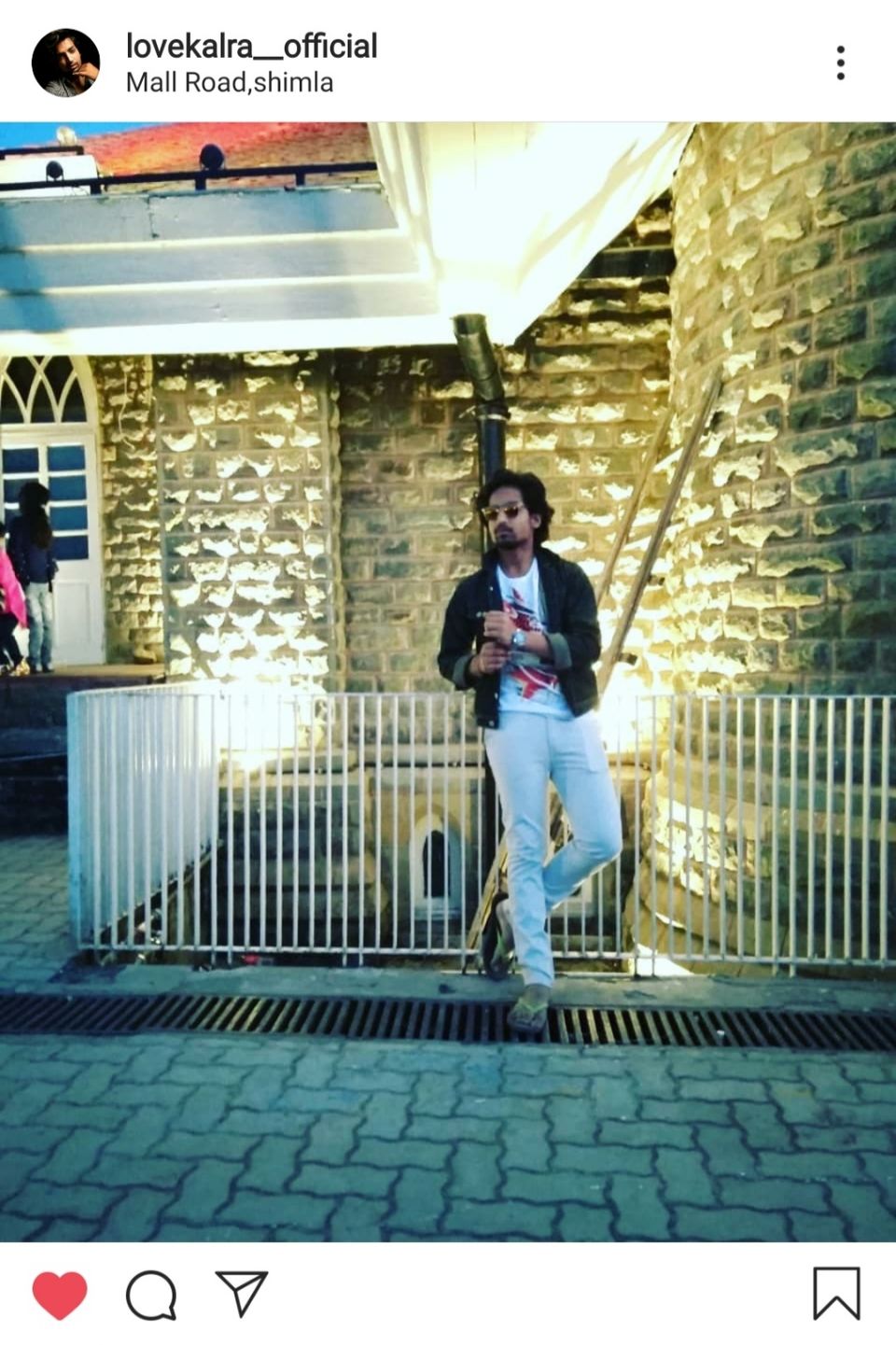 After having photoshoot from there we found the beautiful place to carry out the pics session, the point was very attractive known as scandal point, i dont the reason why its called so but its very ticky, i have the got the wonderful view from the scandal point, it was the time of sunset when sun light becomes red and coming far from the mountains, that low wavelength red light with along the blue colour sky was creating the marvellous aura of that point, just have a lo ok on the picture of me at scandal point.

As we headed towards the area near to the church what we saw there , a  large ground with large gathering of the people including couples and the various groups of the friends enjoying the open loud music which was the main attraction of the peoples, all were assembled some were dancing with the music and some were involved in other fun activities  like horse riding and other games offered by different vendors of the area around church, the church is also very beautiful attracting lots of people towards them ,  picture below of the church .

Beautiful church and gatherings of people

After enjoying the day well around the mall road attractions , around 7: 30 PM we started going back to the hotel, we started walking down through the mini streets and after 20 mins of walking we have found the good eating restaurant there we ate the chicken changezi and roasted chicken, chicken was not so good just ok ok after having dinner we picked up one bottle of whisky and headed towards our room.

We reached to our hotel around 8:30 PM there we drink have fun, chit chat with each other, partied around 1 am after midnight of next day ,  view from the hotel was wonderful we were enjoying  by seeing the view from our hotel balcony, eyes towards the mountain, whisky in the hand and cold feeling of the lovely mountains , after lots of fun we slept around 2 am of 28 th june

The hotel was quite good i would give 7 out of 10 to the hotel, food was not that much good but view was awesome at that much budget

Next day i was asking from my freinds to go the jhaku temple , it was around 4 km trekking distance from the hotel but of them deny to go there, we wale up around 9 am, had tea while watching the mountains from our balcony and listening karvaan music radio, such a pleasant day, which you can only enjoy after reaching there, we drove back to the delhi after completing the wonderful journey, such a lovely place shimla, you should go once in your definitely there.