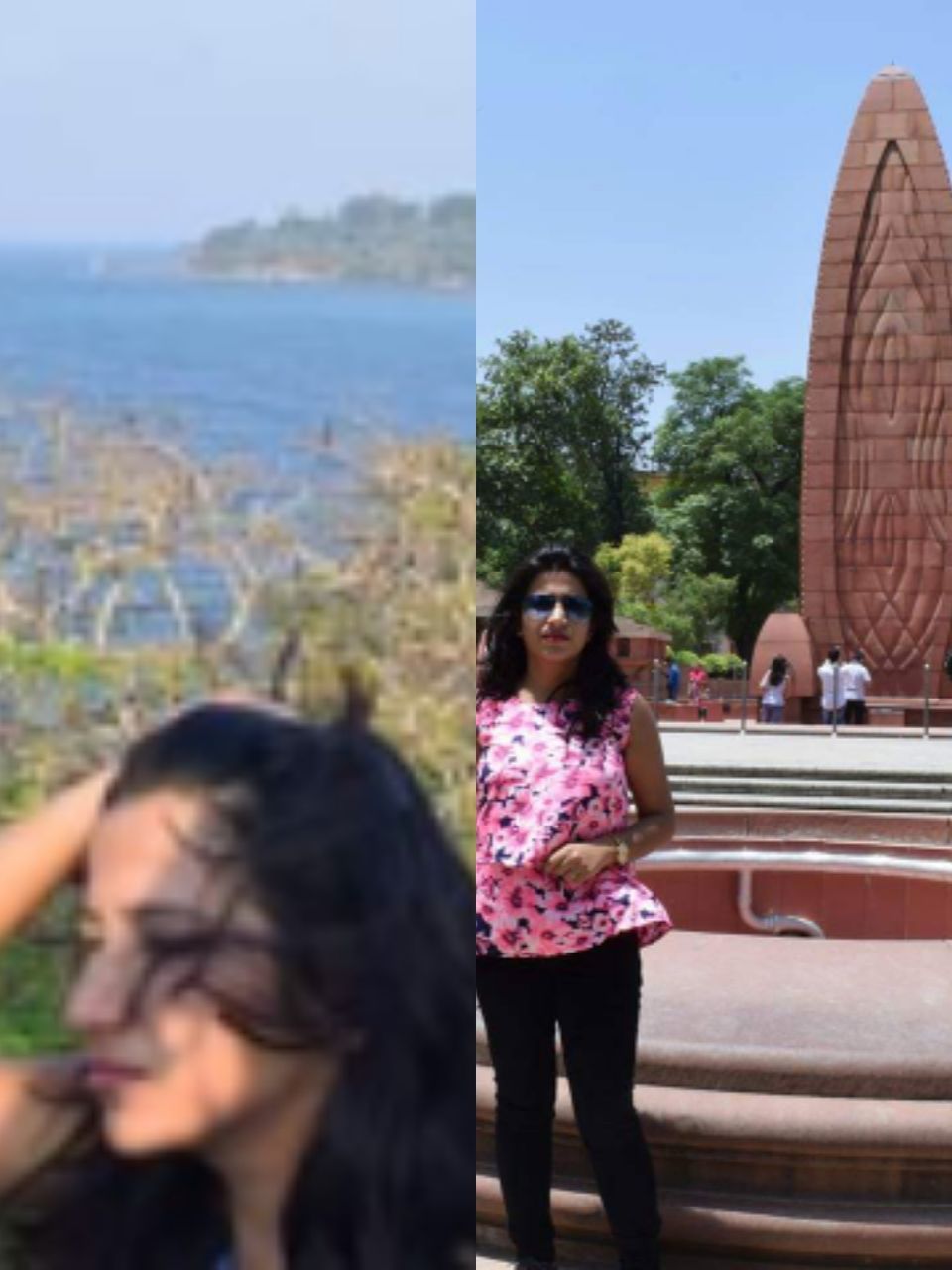 There are certain clichés of a haunted tale- a mass murder frenzy; loosening of the blood-dimmed tide upon the innocent; a heavy air and aura burdened with damned souls.  You will feel chilly, frozen and goosebumps; you will have sightings and hearings and you will only be able to explain them as your imagining; you will want to go for a run and yet would not find a way. Paranormal enthusiasts have reported this heaviness in foul smelling air as one of the prominent signs of a supernatural presence.
This tale, however, is different. It connects two cities; two endpoints; two extremes, somewhat obliquely on the Indian Map. One is the Holy seat of the Golden Temple and the other cursed since time immemorial - Amritsar and Port Blair. One shares the Radcliffe line; the other marks the borderline of Indian subcontinent in the Bay of Bengal. One residing the most hospitable community, the other providing governance to the unsociable Sentinelese tribe. They are miles apart in their distance, people and needs; yet connected to the Indian Heartland by that all encompassing line of patriotism that became rock solid with the shared history of colonial oppression.


The rooftop view of "Kala Pani" that is visibly azure 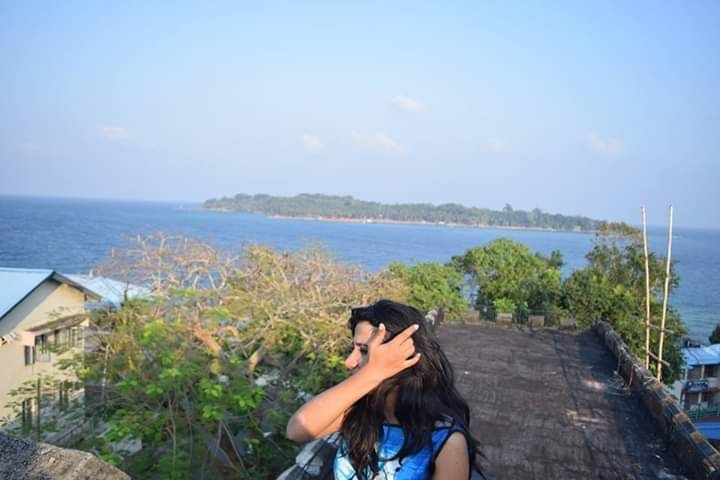 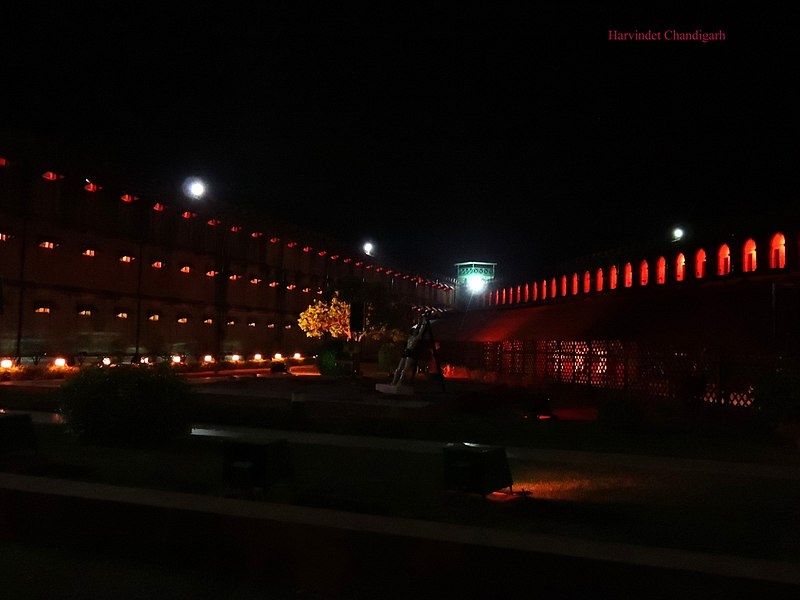 This popular tourist spot at Andman group of islands screams of its grave history (pun intended). Tourists are awestruck at the star shaped architecture of the building that was kept as a prison for those extremists who were the greatest threat to the British supremacy in colonial India. The most notable amongst these were Fazl-e-Haq Khairabadi, Yogendra Shukla, Batukeshwar Dutt, Babarao Savarkar, Vinayak Damodar Savarkar, Sachindra Nath Sanyal, Bhai Parmanand, Sohan Singh and Subodh Roy and many others.
In many of the Hollywood Horror flicks, there is a mental hospital where patients were kept isolated for experimentation and coercion under the pretext of treating them where they turned into ghosts as isolation deprived the living from the worldly experience. At this Cellular jail on the "cursed" Andman islands the inmates were kept in isolation not only from the rest of the world but also from each other. This architecture marvel was so constructed that the front of one of its wings faces the back of the other. There was a single ventilator in each of it's tiny cells that was much above the line of sight of its inmates who were kept tied down. 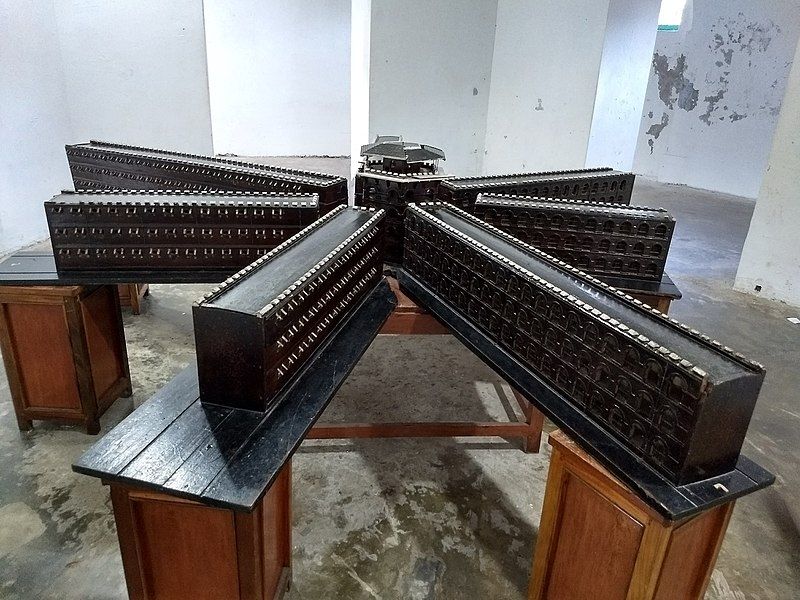 The punishments were severe enough to break the will and bones alike. They were tasked with making a certain number of ropes from coconut shells failing which the prisoners were tied to the yoke instead of the cattle to churn out the oil. There was frequent whipping and the Jailer was a sadist who delight himself with the daily display of whipping done on one or the other inmate. The echoes of their cries reverberated throughout the jail as a warning for the others. 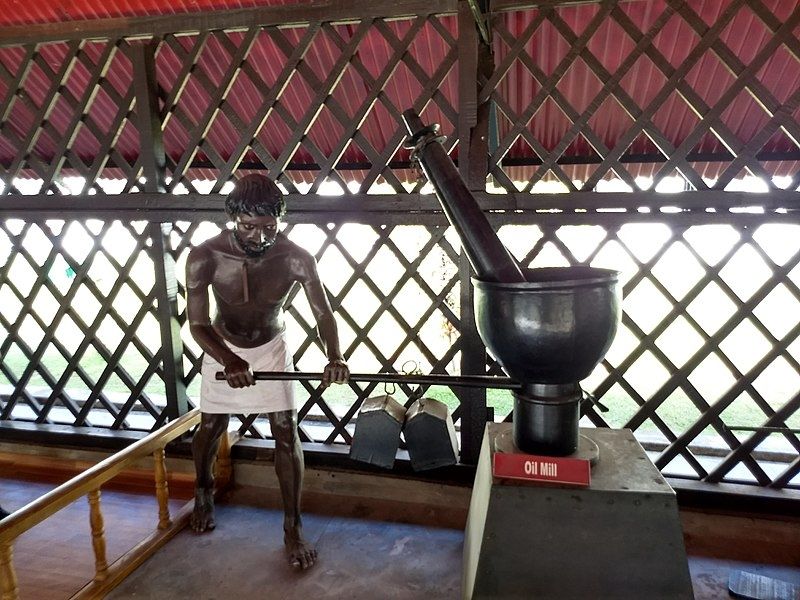 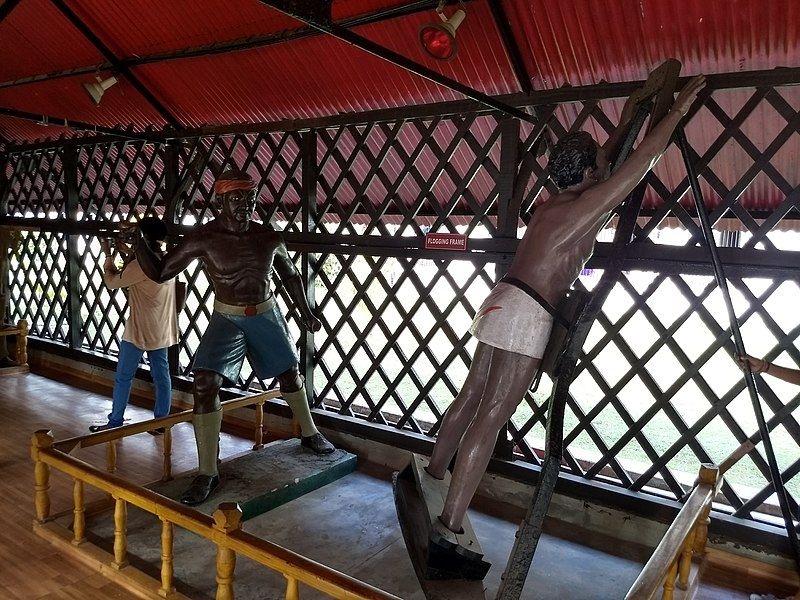 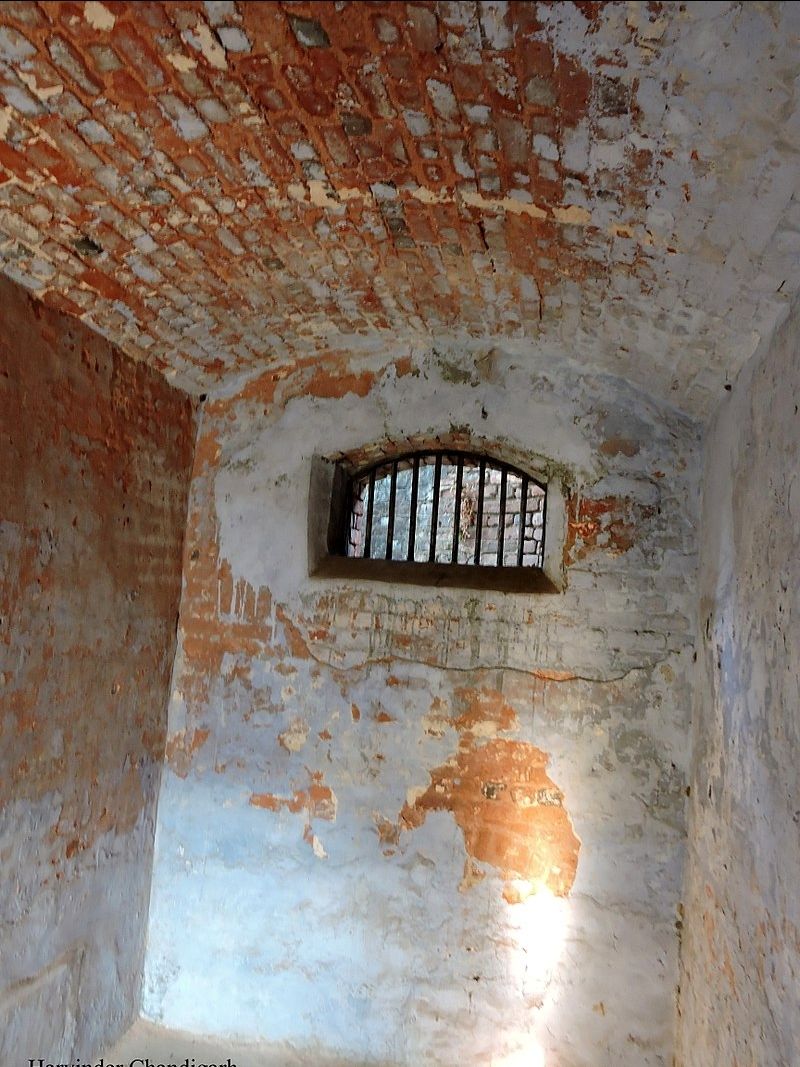 Perhaps, this island truly was cursed as the relatives of these prisoners banished them pertaining to the belief that crossing the seas makes one's allegiance change making them damned and any contact with them will bring curse to others too. Because of this belief, the occasional relief of knowing about their loved ones, of knowing someone out there who was waiting and praying for them, of knowing someone who can rescue them was for ever vanquished. They were left without hope and in eternal torture. Their deaths on noose often didn't receive dignified funeral and their bodies were just tossed of like a pebble into the vast expanse of the sea where this pebble could hardly create a noticeable stir.
And yet when one visits this spot, any foul heaviness in air is hardly felt. In fact the breeze is unusually calm and ethereal even when perhaps it's surrounded by supposedly "damned" spirits. When you look inside the cells and the noose and hear the accounts of brutality you do feel goosebumps and chills. But never had anyone reported a feeling of being watched and probed from a paranormal distance.
Perhaps the damned ones ultimately found salvation when tourists poured in thousands lifting up the curse as the island could no longer bind them or perhaps they were so hopeless and tired that this stir at
their place of rest is not potent enough to raise them for unrest (pun intended). I wonder! I shivered as I listened to this atrocious history of the Cellular Jail and several thoughts crossed my mind.
I thanked God for not being born in those times and yet my faith pondered over the idea of rebirth and I shivered thinking if at all I had existed then, how had I lived through and with it. Perhaps, Death is a noble friend and yet I felt scared. And then I rebuked myself over the meaninglessness of my life that has never tasted patriotism as these warriors of our Independence had.
I wondered and reflected and returned to the mainland haunted...Haunted by my own imagination of the sufferings of the prison inmates; haunted by the idea of their desperate isolation; haunted by the thought what if there is no place from where they had assured themselves that their life wasn't wasted away.


As ghosts of the past would have it, within the same trimester I happened to visit Amritsar where the mass massacre at the command of Gen. Dyer killed several hundreds at the peaceful gathering on the occasion of Baisakhi.

The marks of gun shots 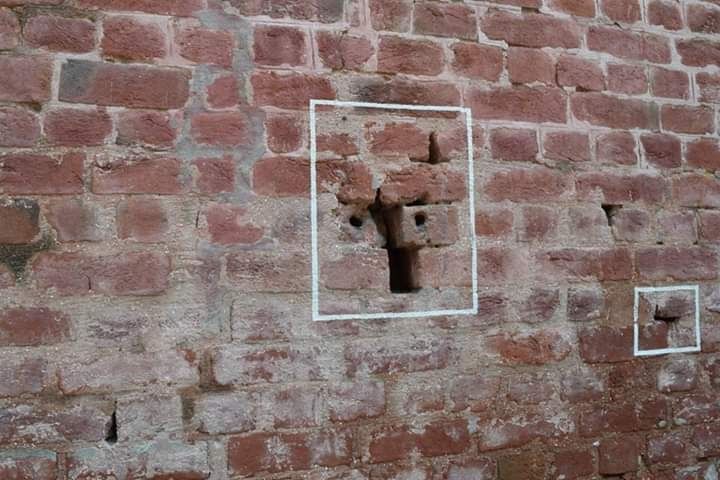 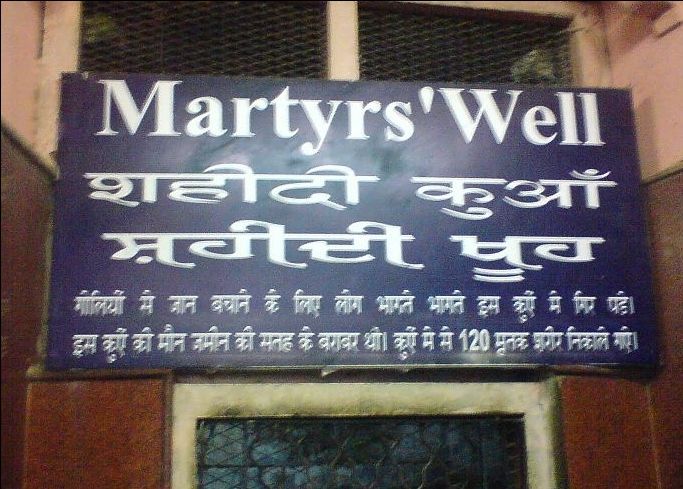 As I stood before this wall, that stands as a testimony to the fire opened at children, women and men alike who tried in vain to escape the walls that were shooting bullets. The thin passageway had shed bloody tears at its incompetence in letting people go. The Martyrs Well in it's premises, perhaps had welcomed the innocent victims with open arms but helplessly it had to entomb them. I wondered that these walls heard more gunshots or the cries. And yet no one answered to my tearful heart.Again, there was an ethereal peace in the air at this site of one of the history's most tragic mass martyrdom.
Perhaps this is the calm they say that results from chaos! Perhaps, this is a supernatural experience but altogether in and from another realm. Perhaps, the spirits at both these sites merged with God having had served their share in the great Yagya of National struggle for freedom. 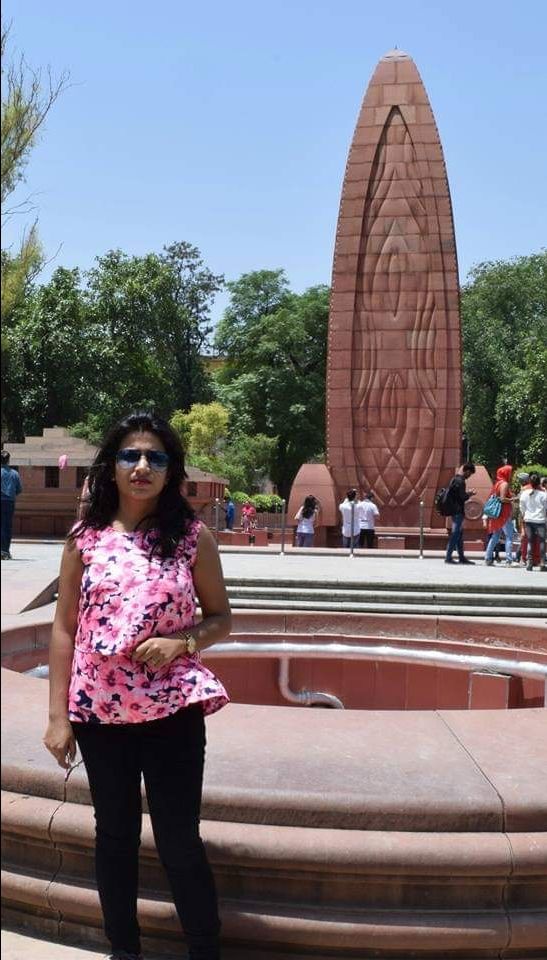 P.S. Some hauntings are not caused by the ghosts but their stories.
Some experiences are scary just by the inexperience of them.