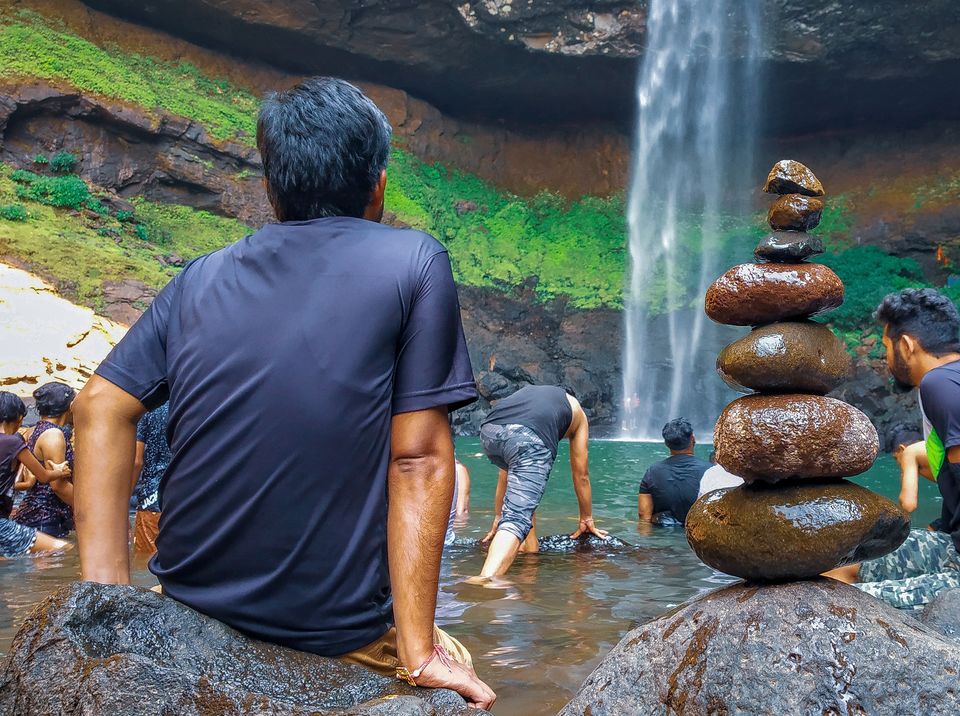 I am still confused why the unplanned things turn out to so well? A trip which invoked the traveler and blogger inside me and the one which inspired me to spend my rest of life on wandering journeys.

A day before, we were hovering around a plan of Raigad fort trekking and landed up to something else at 100 km away. On Saturday night, as usual, the name of WhatsApp group got changed to "Devkund"! Yeah, the same place where we got abandoned to enter in September due to heavy rainfall. But this time, no excuse!

From Mumbai- Karjat- Pali- Bhira. There are parking issues at Bhira so better to park at Pali and then travel to Bhira by bus.

Early morning travels have always been a great start. Starting from Shivar chowk we headed towards Tamhini. It was an unusual weekend morning at Hinjewadi IT park as we saw a lot of people gathered. Oh, it was mini marathon arranged. While riding on bikes, we were yelling "Bhaag Milkha Bhaag!" The sun was about to peep when we reached to Pirangut.

It was a cold morning. We had our preferred breakfast at "Shri Joshi Vadewale". Sounds weird?? The shop owner told the controversial story about the original name owner who has claimed against the name of the shop. The case resulted in changing the name. Nonetheless, Poha was awesome.

A patch came in between which forced us to stop and the nostrils got active to their full extent. I cannot explain how soothing aroma it was! We were going through a series of rice fields and the surroundings were smelling heavenly. This truly signifies the magic of the supreme almighty!

I am very much sure that everyone who has traveled to Tamhini, took a pause stop to enjoy the scenic views of Mulshi dam. Though I have come here many times, every time it is a different experience!

As soon as Kundlika valley stated, the cool breezes delighted us. From here, one can see the beautiful cliff down. This place is also known for water rafting over the gushing water of Kundlika River. From here, a series of mountain hoods, curvy roads, wild yellow flowers accompanied. The day was getting hotter as we moved further through villages- Goawadi, Varak, Chachiwali, Sarole, and Nivhe.

With an hour journey through the beautiful surrounding, we reached Patnus. This is the place where you can be ready for a trek with all things like water bottles, foodstuffs to carry further. You can easily identify some shops at the side of a bus stand.

Reaching to Bhira, Tata power Hydroelectric project welcomed us. Do not park vehicles over here as the waterfall is still far, Aage Badhate Rahiyo! Riding through a couple of slopes, one reaches to the parking slot.

And, we got ready for a reverse trek from a quaint village of Bhira to Devkund. Meanwhile, I checked the condition of my "Tooti wali tang". One can also hire a guide with a charge of 50 Rs/ head from here, but we believe in exploring through unexplored ways (Over Excitement!). But on a serious note, the amount is also needed for regular cleaning and maintenance along the way. So, not a big deal in contributing to nature!

The trek hell through a dense forest with random up and downs. At some time, you are climbing up against the hill and at some places, it goes plain. After covering a small distance, we crossed a small flow which leads us to the backwater of the dam. From here, the backwater accompanies you the entire trek.

Since the sun was right above us, we were sweating like a hog! The initial accent was little tiring until we got fresh at the side of the dam. One can enjoy the scenic views from here. The blue-green water against the backdrop of yellow hoods makes you speechless.

I would recommend having a proper trekking shoe as it's not a walk-in park. During the monsoon, the water volume increases very quickly due to the design of the hills, so it is unsafe to see the waterfall. So, after monsoon is the best time to visit. The further trek is quite soothing to watch gigantic hoods, lush green surrounding and a crystal blue water of dam.

We were fortunate enough to know the majestic story of Devkund from a local guide. Devkund also means bathtub of gods/goddesses. The water falls in a pond which people used to worship long back. Moving from the base of the pond, big bronze and copper vessels used to float over the water which villagers used to cook a meal. Over the period, due to unending greed, the vessels stopped coming up and nobody dared to go at the base, too.

At the base, a small pond welcomed us. A small trail of a waterfall was enriching the beauty of the place. Relaxing in the cold water was such a relief after an hour trek in scorching heat. A local person was charging 10 Rs for a wooden bridge to cross over the pond. The best way to preserve Natural Resources is to involve the locals in its upkeep. If the locals feel it is "their mountain "and their livelihood is interlinked with it, they can be better convinced to take care of it.

From here, again the assent starts which is quite steep and tiring as well. As it was the final step to the hidden beauty, we covered it in much less time. The jungle trail reveals the beauty of a variety of mosses, wild herbs, flowers, and various chirping birds.

The trail leads to an open terrain filled with big rocks through which the water flows. The site was pretty similar to the flow of Ganges in the North. Crossing the water, left us to a canopy surrounded by huge, wide rocks. From here, we could hear the gushing waterfall. I wish I could have more than two ears to hear that burbling sound!

The final path was majestic like an orchestra theater, where the curtain falls, and the concert starts. Moving through a steep rock, we suddenly got exposed to that roaring beauty.

What a sight??? I literally rubbed my eyes when I saw the plunge stream moving through a narrow space straight into the blue-green pond. It felt like it came out from a novel, it was such unreal! The two gigantic stones felt like lord's palms and he is showering his mercy through his palms joint together.

When one finally reaches here, it's a different feeling altogether. The exotic green-blue waters of Devkund and the soothing chill in the air will take away your fatigue almost immediately. The waterfall is a confluence of 3 small waterfalls and also the origin of Kundlika river. It is blessed with a unique canopy which results in stunning reflection of the bushes straight away into the clear, pristine and chilled water.

We had to accept the ruckus of the big groups to manage to find a good spot either sitting with feet immersed in water or to take a deep dive in cold water. Spending an hour to explore the unspoiled charm of nature is worth the pain! The height of the falls is around 220 ft. & depth of the pool formed under the falls is still a mystery. But, the depth increases gradually so you can have fun in the shallow water.

Meanwhile, I got an idea of rock cairn as there were multicolored stones inside the pond. The whole structure looked immensely beautiful with a backdrop of gushing plunge waterfall.

On a return journey, the same trail goes back as one comes in. My "tooti tang" started paining after a while. There were 4-5 stalls on the way which offer water, cold drinks, snacks and food on a preorder basis. I would recommend having a nimbu pani which was quite refreshing.

Summing up, the whole trek took around 5 hours including ascend and descend. The sun was setting as we started our return journey. This was really an off-beat trek. I think, very few treks give the combined pleasures of a lake, tall vertical rock-faces, dense jungle with abundant bird-life and a majestic waterfall, all in one area!

To catch a glimpse of crystal-clear waterfalls gushing harmoniously amidst scenic settings of a lush green forest, trek to Devkund waterfall.Located close to a quaint village called Bhira in Maharashtra, Devkund's allure lies in the fact that it remains relatively unexplored and hence naturally charming. Climbing the steep slopes to reach this scenic spot will indeed be a rewarding experience!