August 2018, Philippines- The flight scheduled for Bohol got cancelled which is among the best places in the world for diving.

November, 2018, Andaman and Nicobar Islands- What a joy it is to finally tick off something from the bucket list!!!

Ticking off scuba diving from my bucket list was long due. I was giving every shot to do it since 2017 but even after trying thrice, my dream of swimming underwater among fish was still unfulfilled. But last month, I went to the Andaman Islands with a friend of mine who had also been unlucky like me when it came to taking a plunge in the water. She had returned from places like Thailand and Mauritius empty-handed, without a single glimpse of the sea life. Whatever was the reason behind our fate, we decided to change it because we both really wanted to be a part of the marine life even it is for a short time period. And for this, she especially joined me from Denmark.

Havelock Island is the best place in Andaman to do scuba diving. You don’t need to book your slot in advance. The hotel/resort where you are staying will take care of it. There are two variants in terms of tariff (including photographs and videos)- Rs. 4,000 for early morning dive and Rs. 3,500 for afternoon dive. The rates vary because of clear visibility and increased chances of finding breathing corals early in the morning. So, we took the first slot of the day which was from 6 am to 7 am.

After doing all the formalities and sharing our emergency contact number of the mainland in case something happens to us, we headed towards Nemo Reef- our scuba diving spot. We were loaded with the oxygen cylinder, swimming fins and mask, and weights (to keep us underwater) before the instructor started to train us. We were taught about the universal underwater signs for communication. The trainer said to me in a stern voice, “I won’t be able to solve your problem underwater without knowing what exactly the matter is. So, remember these signs. Also, you can come up to the surface only twice. After that, I will have to take you out.” I really didn’t understand why I would come outside. Anyway, I learnt the signs carefully.

After making me do breathing practice and other techniques along with answering my unlimited questions, my trainer took me under the water and that was the exact moment when I forgot everything else that was happening outside it. It was a whole different world altogether. There was total silence. 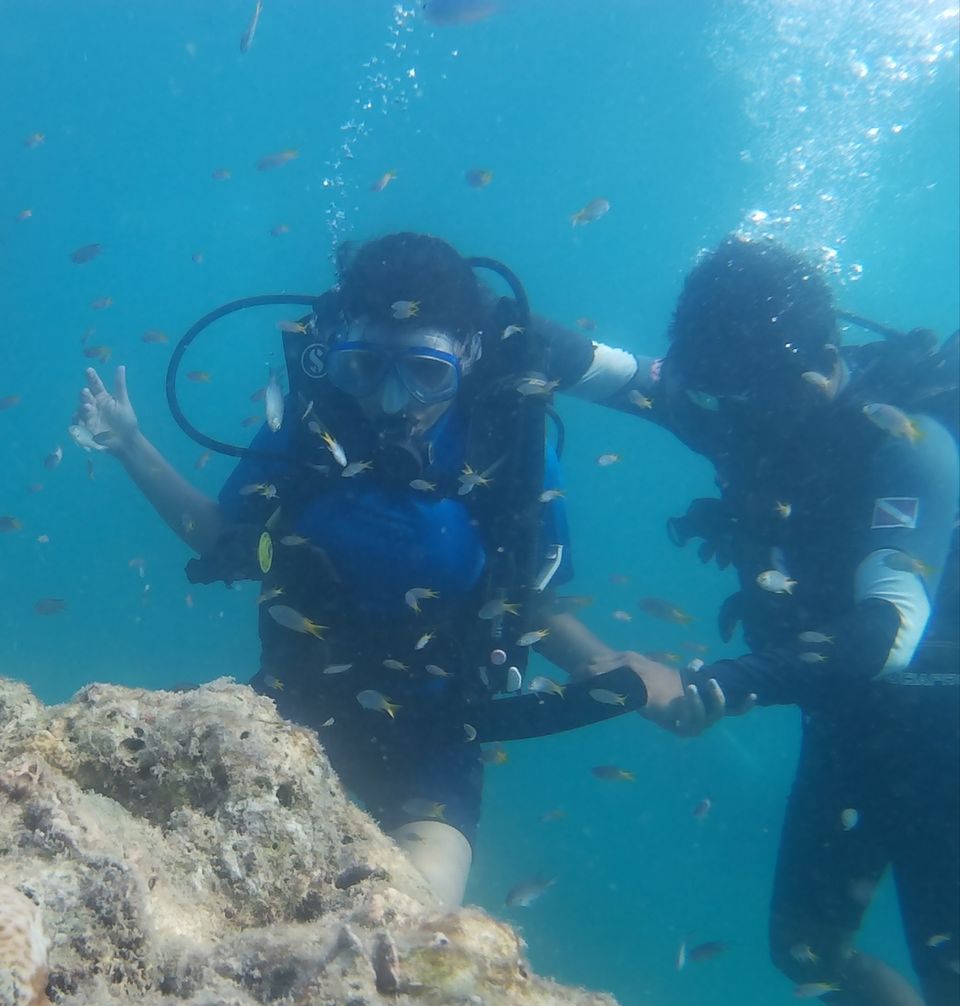 Going down further, I started seeing breathing corals. Most of them were bleached due to global warming. After that, a shoal of grey and yellow fish suddenly came in front of me. That was my first encounter with any type of fish under the water. And yes, I also found Nemo!!! A childlike joy rushed into me when I saw that cute little fish in reality so close to me swimming near a coral. I got so excited. I wanted to touch it but it’s a strict instruction not to touch anything inside the water as it may be poisonous.

I also asked the trainer to take me to a deeper level, which he did. During the training session, he told me that pressure inside the water is much more than the one you feel during a flight. So, he was the one to decide how deep we would go. Also, he kept on asking me at regular intervals am I fine, using the sign language. 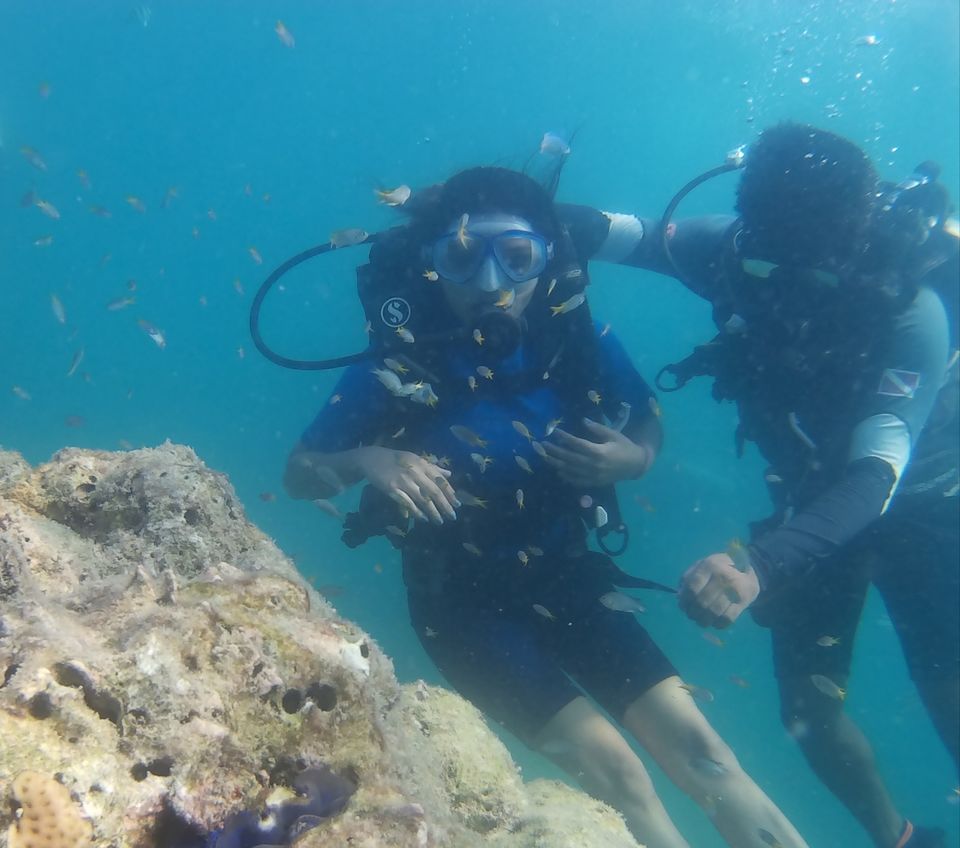 After exploring the marine life for half an hour, we came to the water surface and I started breathing normally again. I saw my friend beside me, and all our eyes could say to each other was, “It was amazing.” We both were smiling because we had finally earned that beautiful experience for a lifetime.

I am really fascinated with scuba diving, and I would love to do it again wherever and whenever possible. Before doing it, I was a bit nervous and telling myself to remember all the underwater signs correctly. But the feeling of letting myself descent inside the water was so good. I was completely weightless. I can barely explain in words how it actually felt to be in that zone. It was a mix of surprise and adrenaline rush. It was like a perfect cocktail of innumerable and unforgettable memories in the right proportion.

If you ever get the wonderful opportunity to experience all of this, then grab it. It will be a great addition to your life.