A Chirpy Indian Girl At The Mediterranean Shores

Travel goals are such that at times they break you or make you. They drive you or make you restless. They keep you in long waiting or make you fly to fulfill your bucket list. What does a bucket list do to you? It keeps you going. It helps you with a plan. Two years I had been waiting to visit the Cinque Terre owing to its hill-perched vibrant houses and the active seashores. It did find a place in my heart and the fulfillment of my eyes. Mahesh and Shreya are to thank for. For making this dream come true, within six months of planning, not disturbing work and satiating my wanderlust.

Cinque Terre are five tiny villages called Monteresso al Mare, Vernazza, Corniglia, Manarola and Riomaggiore. A sixth Cinque Terre Village can be termed as Porto Venero, an ancient British style port situated around an hour’s drive from La Spezia city in Italy. These five pastel painted coastal villages on the shores of Liguria, that are hidden between Genoa and Pisa, are no less than a treasure found at sea. The streets in the villages fit in a handful of cars and a few people that can be mostly found in the bars and fish cafes of Monteresso, the most northerly village. Every place is jammed and bustling with people. Few places are as astonishing as these villages, if you are lucky enough you even get to jump from the cliff and swim in the vast Mediterranean Sea.

Cinque Terre has been declared as the UNESCO World Heritage Site owing to its unique land and culture. Explorers and travellers often seek solitude in the ambience of natural beauty unlike the palaces, museums, castles, churches, monuments etc. Cinque Terre is a complete lack of this element and is standing tall only to coastal beauty and its mountainous landscapes. Popular things to do include walking the breathtaking paths along the cliffs, pausing over gelato in a café surrounded by candy-colored houses, cooling off with a swim, capturing pictures of some of Italy’s best views, and just absorbing the Old World charm. The Cinque Terre are potentially mesmerizing, sun-soaked and at the heart of a national park. Those wishing to see charming seaside Italian towns, minus the heaving crowds, should instead look to one of the country’s numerous unsung alternatives.

While Cinque Terre isn’t very driver-friendly, it’s amazing for those who like to get around on foot or by rail or boat. A Trenitalia service connects the quintet, running about three times an hour from dawn till around 11pm. Stations are just a few minutes’ journey apart, with the trains rushing past the Ligurian Sea and via mountain tunnels. Even travellers who come to Cinque Terre to hike usually find the trains useful. The train staff is super helpful and even helps with your map according to your personalized travel plans to see the city. Three days, two days and one day all route passes for all the villages are available upfront on the train counters. If you are planning to just see one village in a day, separate vending machines for tickets to go to the next village are also made possible. 16 Euros per day is what the All Route Cinque Terre Pass for Trenittalia will cost you. Does not seem to make a hole in your pocket at all.

Travelling in Cinque Terre is of course strenuous. You are going to need a lot of water and juice to keep you going as some of the villages also involve an energetic trek route that takes you from Monteresso to Vernazza, the second coastal beauty on the list. You’re bound to work up an appetite in Cinque Terre. Fortunately, the five villages and several little intervening hamlets have lots of enticing places to refill your hungry butterflies, offering espressos, chilled Birra Morettis and bowls of olives, serving lip smacking meals and wine on idyllic waterfront terraces. Seafood is a staple, whether it’s plates of grilled fish, risotto laced with prawns and mussels, shrimp ravioli, and anchovies (which are typically eaten from paper cones). Everything is bound to swim in your stomach. Cinque Terre to be defined in one word is picturesque. Every holiday has to be etched in your memory. A Mediterranean dream blooms with blue seashores, highly perched cliffs, rocky white beaches, lot of tan and an extra dollop of aquamarine shades and brewing beer along the coast. As far as the eye can see, the lands should inspire you in some way or the other so that you can leave a part of you by the sea. Gorgeous stretches of clean sand and umbrellas on the beaches taking a magnificent art form is what Cinque Terre is known for.

I take back an awesome memory of swimming in the Mediterranean with my besties in the salty water. It was clean and filled with dirt at some corners only with the shit of plankton I suppose, which we avoided. Otherwise it was refreshing to see the free bodies and chilling faces of the youth as they tanned hard by the Stony Bay in Vernazza.

Once in a while away from the man made structures and the wonders of the world, it is relieving to find peace and happiness by the sea and the mighty mountains in the middle of the world!

Until next time with another beaming travelogue. 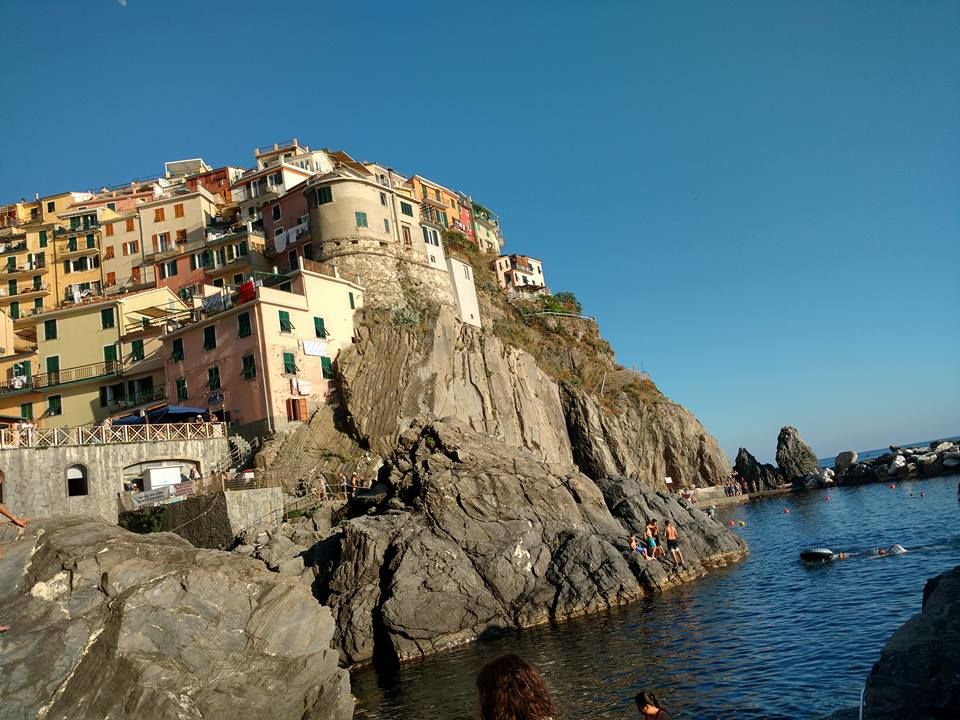