Karnataka Travel GuideKarnataka TripsWhy Gokarna Could Be A Better Option Than Goa?

Why Gokarna could be a better option than Goa? 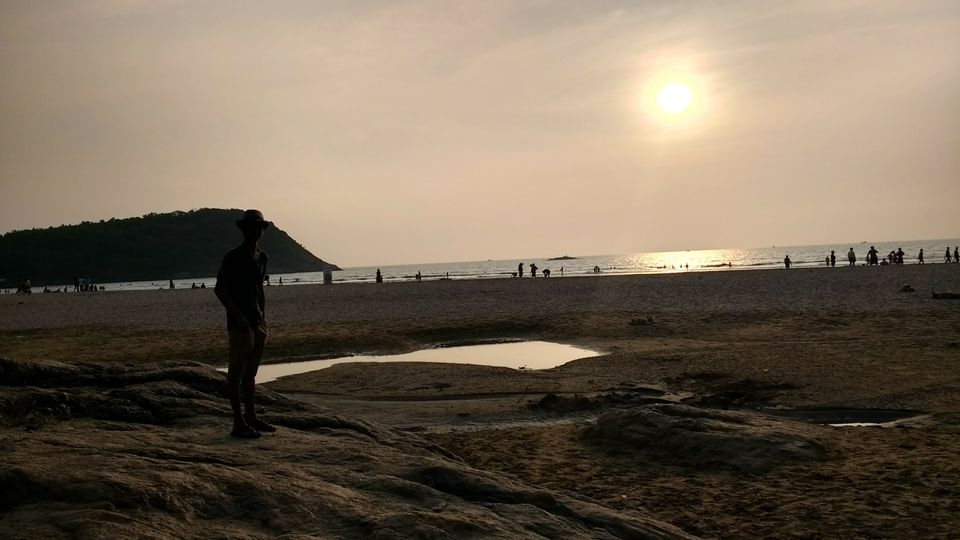 Let’s admit to one thing we all hate about travelling: A place cramped by hordes of tourists, the ones who block the sunrise and photo-bomb your selfies!

Sprawled like baby-turtles on a moonlit beach, tourists make messof a beautiful destination. Goa has become one such place. Mass populations gather in Goa, disrupting all your plans for a peaceful holiday.  (Shimla in Himachal Pradesh has met with a similar fate). Finding yourself the only humanoid on a beach, sippingbeer to a campfire, and closing your eyes to absorb the waves dashing against the cliffs, is an impossible dream in Goa, unless you have a swollen bank account for a private beach resort.

Fear not, I will tell you an alternative.

Travel down south to a lesser known beach-town: Gokarna – a place devoid of mass human gatherings!

The easiest way to Gokarna is taking an overnight-bus journey from Goa or Bangalore. As you step down the bus in the town of Gokarna, spreading your arms, yawning and clearing your eyes, several autowalas flock around you to offer a ride to the beaches of Gokarna. Sandwiched between the calm Arabian Sea on one side and the town-settlements on the other, are the sprawling hills of Gokarna that you have to cross to get to the beaches. Exciting setting, eah?

So when you get down the bus, deny the services of the Autowalas, strap your bag tight on your shoulders like a soldier going out to the war, and set out on a severalkilometers trek. Guided by the Google Map Navigation, you will come across marinal birds perched upon the trees, looking for an early-morning meal, tall coconut trees swaying in the oceanic wind, and the roars of an invisible ocean coming from a distance, like a dragon breathing inside a cave. Do not forget to click some pictures on the way.

Make your first stop at the Om beach which derives its name from the way it shapes around the lurking waters.

Having claimed a few serious injuries in its past, the beach is laden with boulders and rocks all over. Be careful! It was here that I did something so crazy that I will remember the thrill of it for a long time. Here’s what you have to do: Venture deep into the waters and let the lower-half of the body disappear below the surface. Look around and you will discover few rocks jutting their heads out of the water offering you a nice seat. While you’ve left the crowd behind on the shore, sit there for hours, in your own silence, and watch the water play around your legs, and the waves bash against your little island. Watch the sun slowly slip behind the ocean scattered in front of you as the seagulls return to their nests and the sky turns dark. Absorb yourself in your own silence.

Retreat back to the shore as evening takes over. An effortless trek up the hill, and a descend from the other side shall bring you to a less crowded and more pacific – Kuddle beach. Om beach attracts those people who come from nearby towns for a day’s picnic and who return back as the day ends, but Kuddle beach houses those who seek refuge by the ocean!

While the world becomes dark on the Kuddle beach, grab a beer if you wish, and lie down to count the stars. Or get up and walk by the sea, venture in the dark, and sing songs of Mohammad Rafi to yourself. Apart from a few travellers lurking in the darkness of the parked fishermen-boats, you’ll find the hippies and backpackers singing calypsos and dancing around a fire in the shadows of the moon.

As the midnight comes, the beach becomes dang deserted as if you’re the last person on the planet. Hear nothing but the constant whistling of the waves and the winds flirting the coconut giants behind you. If you can, sit until the dusk falls and see the sun slowly rise from the depths of the sea. Else, fall asleep in one of the many affordable resorts.

Imagine waking up to the sound of waves, the next morning, and stretching your arms in a balcony facing the sea! All in a shoestring budget!

While you’re at Gokarna, it has many flavors to satiate your hunger. The noodles of International Gokarna Resort had left me craving ever since I had returned from there. With the noodles blended in a nice cheesy flavor and a drink of sweet lime to accompany with it, there cannot be a better way to spend a lazy afternoon. Among many reasons that I am itching to go back once again to Gokarna is for these noodles at Gokarna International Beach resort. I hope they haven’t changed the chef.

Walk a little further, and you will arrive at a simplistic cafe thatched with dried coconut barks by the name of: ‘Namaste Rock Cafe’. Ask for a Prawns Pizza. And don’t forget to thank me later! They serve it on a banana leaf and one Pizza should be enough for two.

While on the Om beach, look for a certain Dolphin Bay Cafe and ask for ‘Ice-Nuttela‘. It will be a drink unlike any other you’ve had in your life.

What was that thing you were talking about Goa again?

When your bus drops you down, skip the wheels, and travel on foot! You'll love the morning! 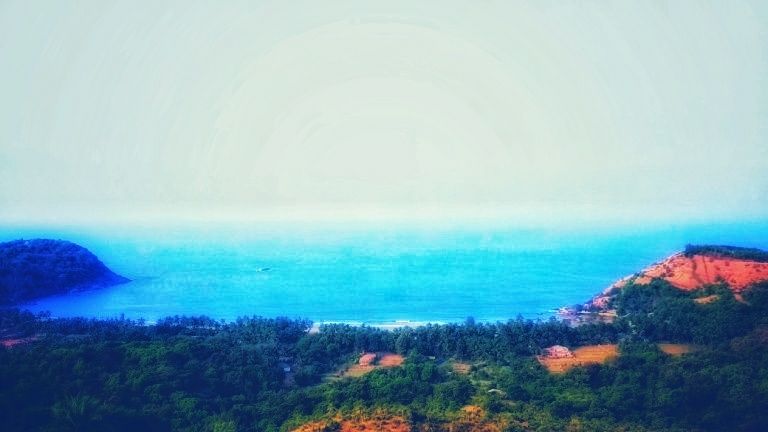 The 'Om' shaped beach is as rocky as it can get! 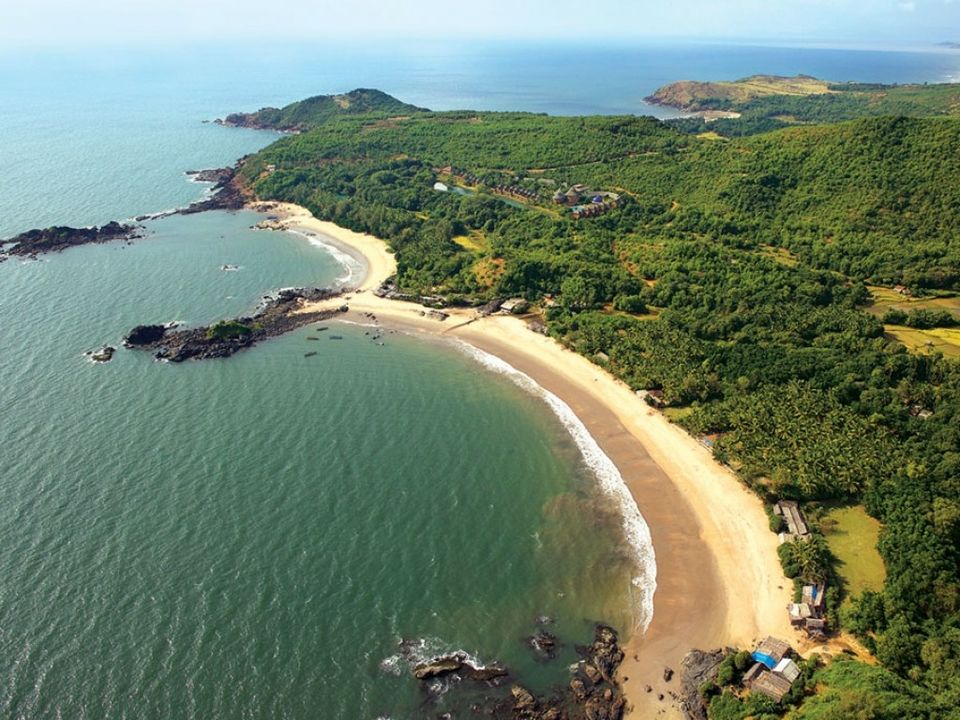 The Kuddle beach is the place you can hear yourself breathing amidst the whispering waves. 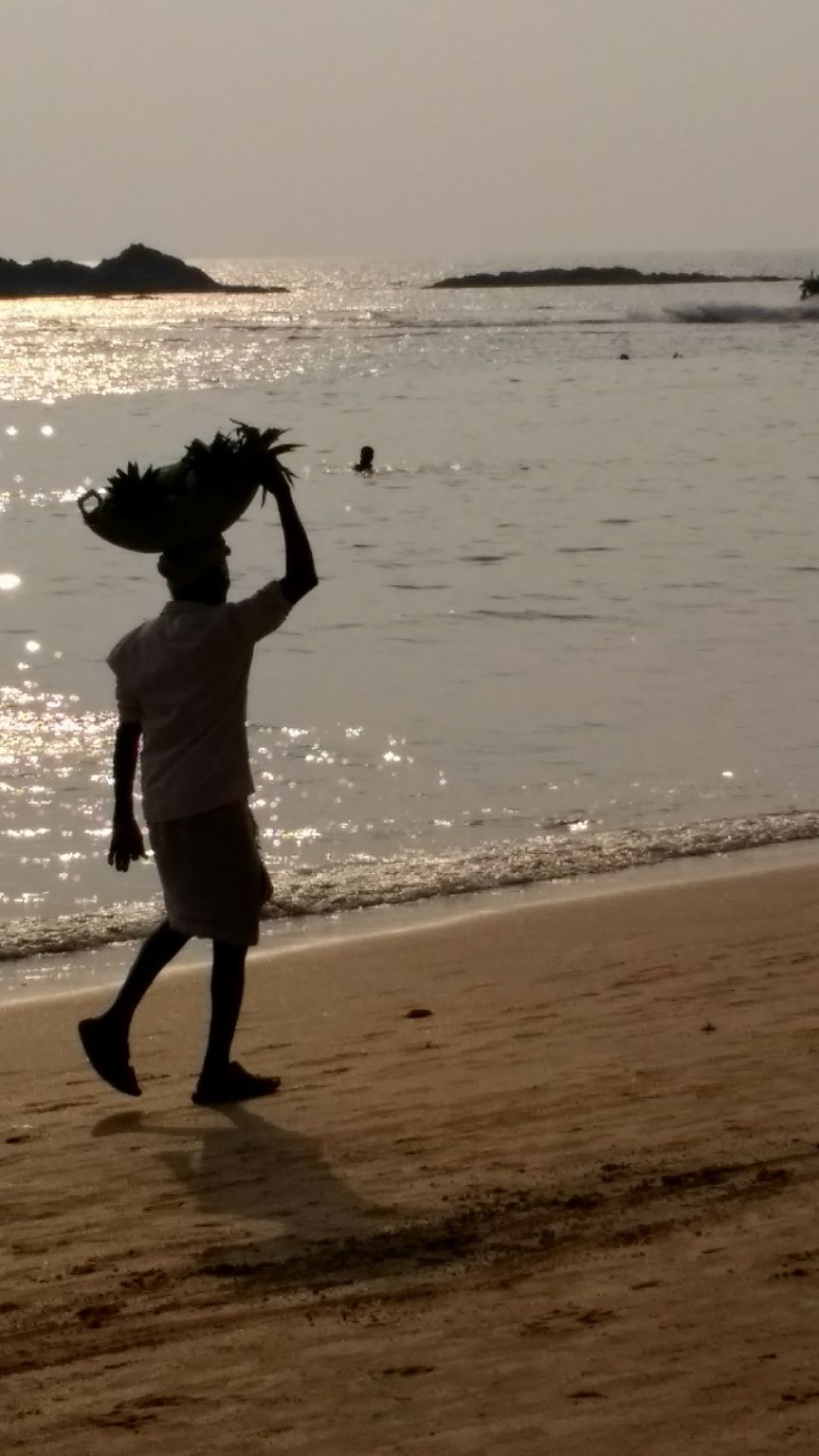 While you trek from one beach to the other, ensure you don't get lost! 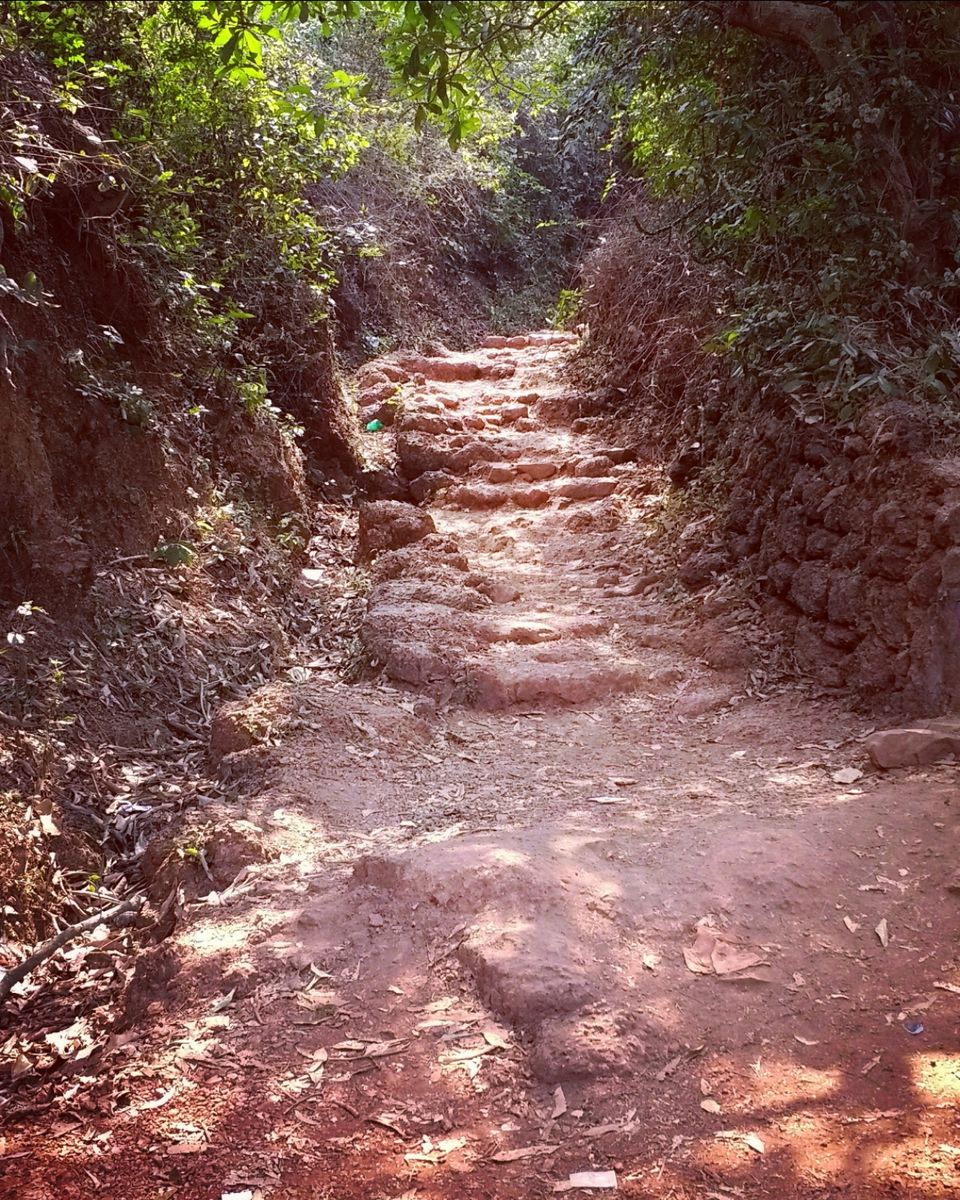 I was totally taken by surprise by this Pizza studded with fresh dead Prawns! 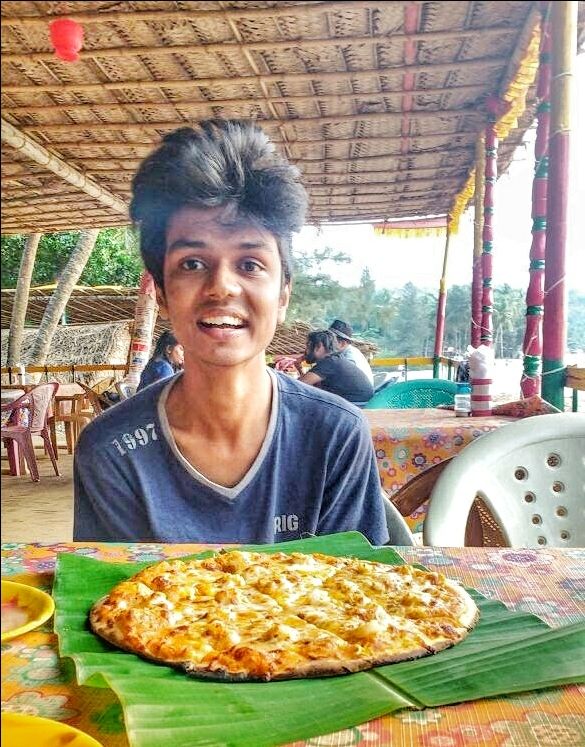 Have some lime-juice and let the sea-breeze caress you to ecstacy. 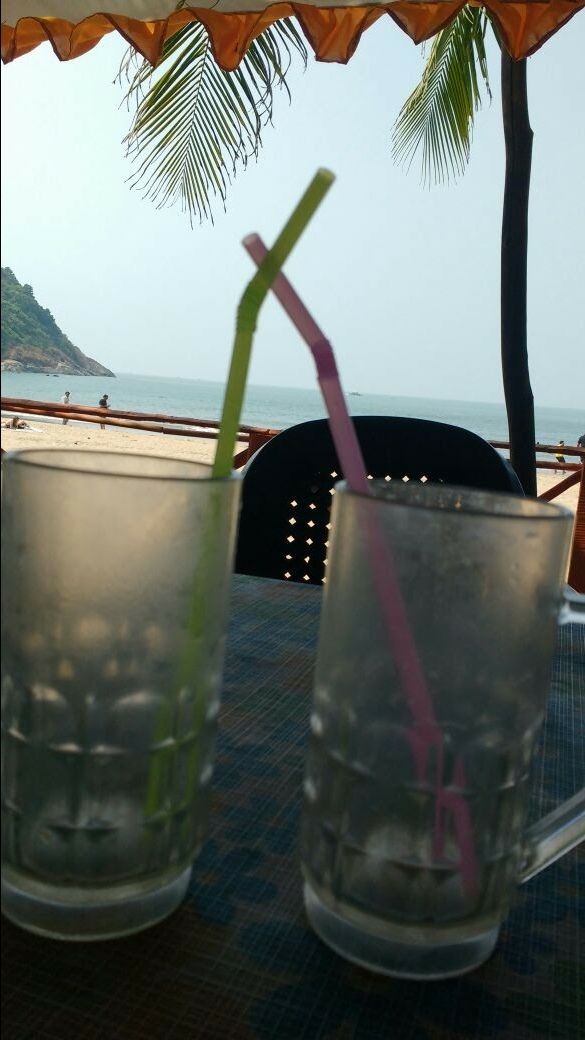