Lalitpur Travel GuideLalitpur TripsOver The Himalayas : One Of The Best Flying Experience You Just Can'T Miss...

Over the Himalayas : One of the best flying experience you just can't miss... 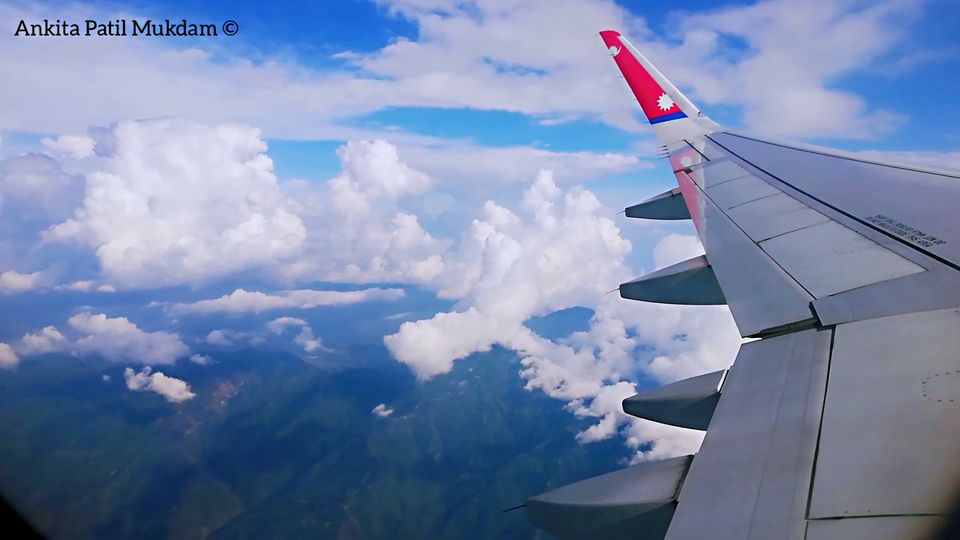 It was last year's June and we had planned a small weekend getaway to Kathmandu, the capital of Nepal. We arrived at the Tribhuvan International Airport late in the night, so we could not see the actual site of the airport. After staying there for 2 days, there was a return flight to Mumbai on 10th of June, 2018. Unfortunately the flight was delayed for 2 hours and this time we got a chance to stay on the airport for much time. It is one of the most beautiful premises of an airport I have ever seen. The runway is about 3 KMs long, having lots, lots of greenery all around.

We had this Nepal Airways flight. We entered the plane and guess what I got the window seat.. Right from the time of taking seats, my eyes could not stop looking out of the window, because of this wonderful scene, that had awaiting for the camera to capture it. This city is surrounded by hills from all the sides, so wherever you look, you can just see grass, some buildings, the hills and clouds.

After waiting for several minutes, finally the plane was bought to the runway. The engines started and within seconds the plane took off.. As soon as we start looking out, we can see how widely the city has been spread around. The city is located in the Kathmandu Valley, which was earlier known as Nepal Valley or Nepa Valley. At the lowest elevation of 1425 meters above MSL (Mean Sea Level) the valley is so widespread that, it covers the area around 168 hectares. Along with the Kathmandu city, the surrounding towns namely Lalitpur (Patan), Kirtipur, Madhyapur Thimi and Bhaktapur can also be seen from the plane.

There are at least 130 monuments and 7 world heritage sites located in the Kathmandu Valley. The valley is surrounded by 4 mountain ranges namely Shivapuri, Phulchowki, Nagarjun and Chandragiri with one of the highest hill elevation around 2850 meters above MSL. The major river flowing through the valley is River Bagmati.

Just within 4 to 5 minutes the plane crosses the valley, entering the hill zone. And from this point, we can see shining fluffy clouds as the sunshine reflects through them.

After exiting the Kathmandu Valley Mountains and before entering the borders of India, the plane crossed the great Mahabharat Mountain Ranges. The Mahabharat Mountain Ranges is a major east to west mountain range paralleling the much higher Great Himalaya Range. That is why; it is also called as Lesser Himalaya Range or Himachal. It is also very famous for its tourist attractions towards Chitwan National Park and Valmiki National Park.

The elevation of Mahabharat ranges varies from 3,700 meters to 4,500 meters (12,000 feet to 14,500 feet) above MSL along the crest. Just imagine when you are flying at an elevation around 30000 feet above MSL and you get to experience a view with these much higher hills, what else you want?

Even the river courses of major rivers can be seen very closely. During this flight, we got to see one of the major river course of Nepal named Gandaki. The Gandaki River is a left bank tributary of the river Ganges aka Ganga.

It was one of the best flying experiences in my life. So if you want to try a flying route with a limitless sky of infinite shades of blue and the mountains of Himalayas, don't miss to fly to Nepal.

Here's the link to the video : https://youtu.be/_HUbjwUD-u0