A monsoon trek is for everyone 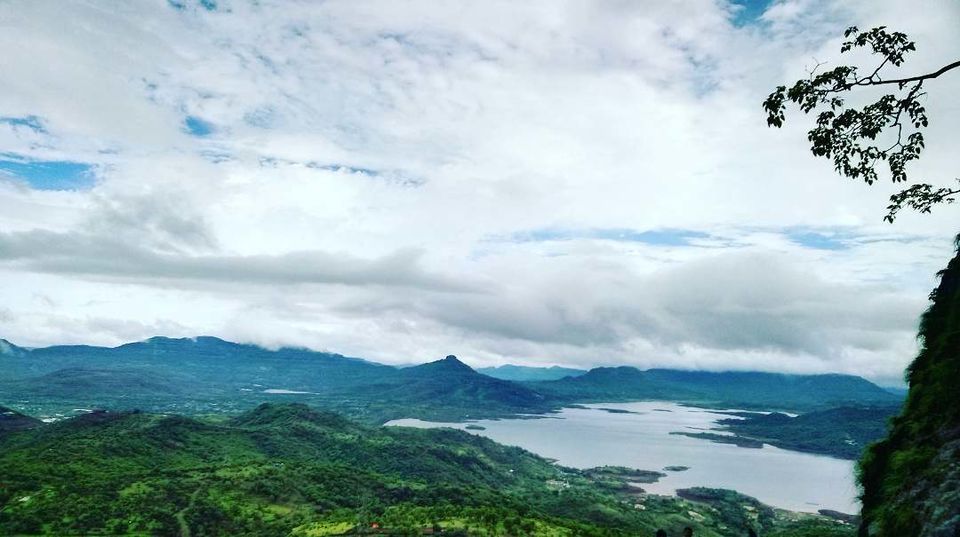 Monsoon treks are enjoyable for a multitude of reasons. Firstly, it is the easiest time to trek, considering that there’s no sun beating down on you, every step you take. Second, there’s no better season to enjoy the flora and fauna of the region in all its glory. Thirdly, the air is at its freshest, the smell of the wet earth is endearing and basically the clean wholesome atmosphere keep you going.

There are some amazing day and overnight treks that one can do in the Sahyadris in the monsoon. We had been planning a monsoon trek for long but the rains kept us waiting. We were exasperated to the point that we decided to go summit Lohagad fort last Sunday, no matter what, with or without the rains. It was divine providence that it started to rain heavily as early as Saturday night. And pour it did. When we all woke up at our respective homes super early (especially for a Sunday morning) it was decidedly a deluge.

It would eventually receive a record 200+ mm of rainfall, as we later found out.

Calls flew across the city. Surprising, most were even more enthused to trek that day. As per our plans, we were supposed to take the Pune Intercity Express (12127) from Dadar. We caught it at the last moment, the train having been delayed by 15 minutes.

Enroute, from the train 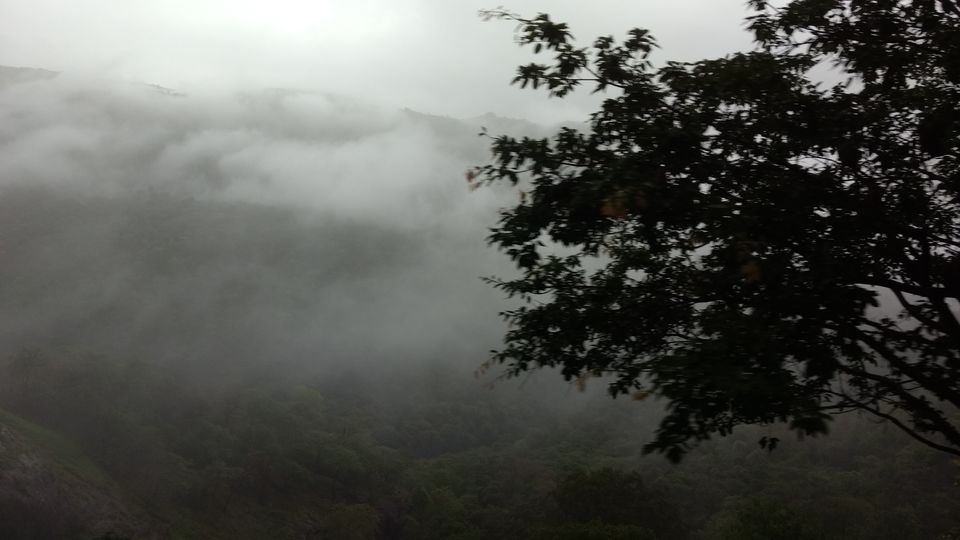 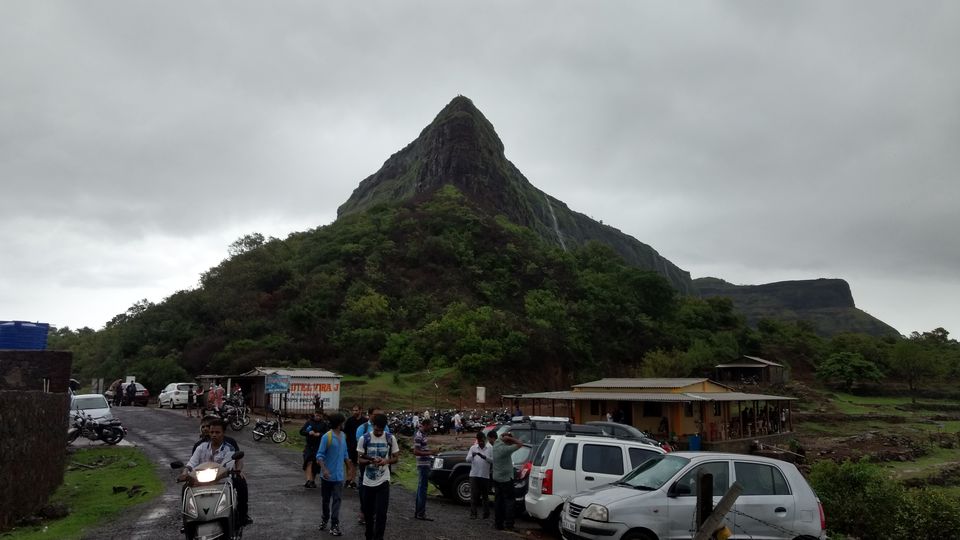 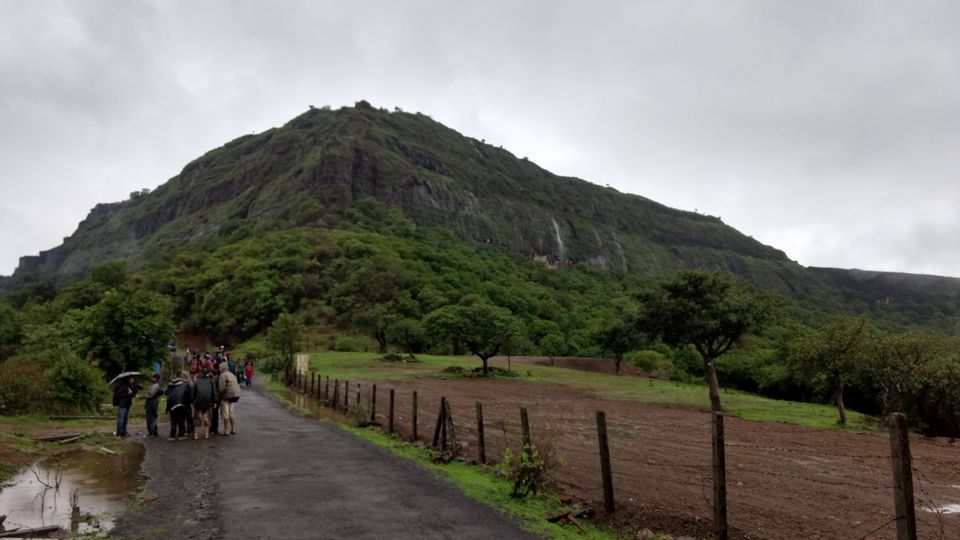 Atop the fort was extremely windy and yet, the mist refused to blow away. It was so misty that we barely could see a few feet ahead of us.

The mist at the top. It got chilly after a while. 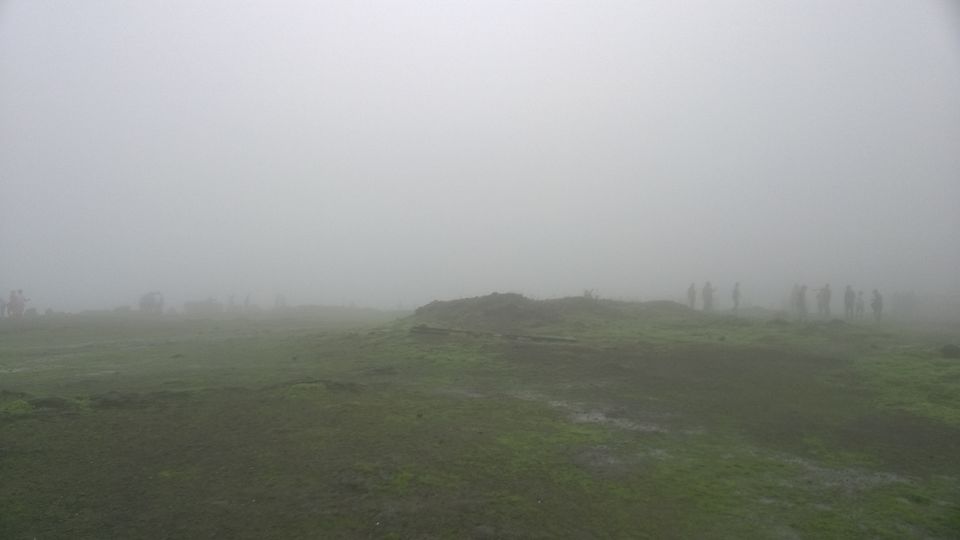 We got off at Lonavla and caught a local train to Malavli railway station.

The views on the way 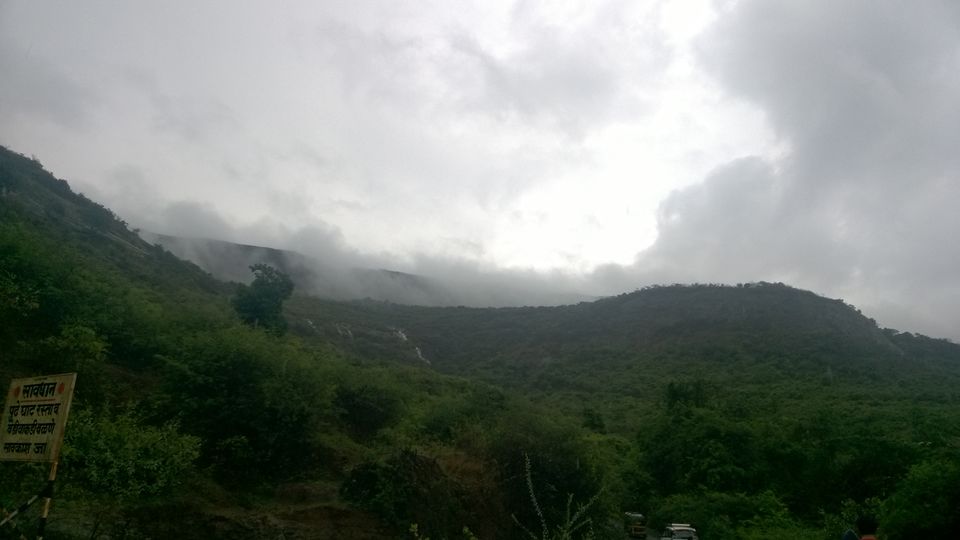 Parts of the way that we climbed/crossed. 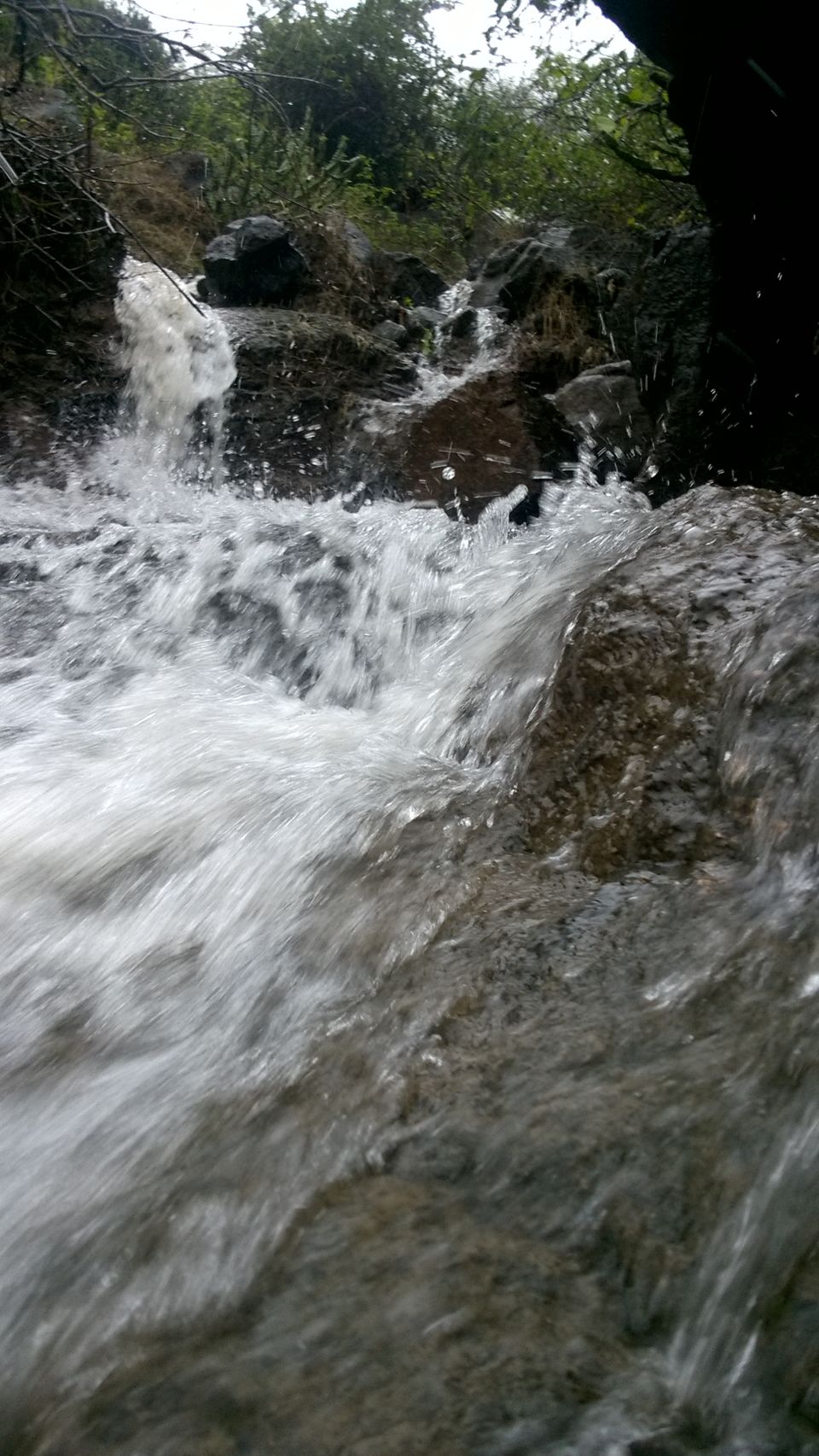 There were several waterfalls on our way but we reserved that fun for the return trip.

It was almost noon by the time we reached the base.

The Lohagad summit, measured at 3389 ft., is one of the highest in Maharashtra, though in no way difficult. It stands in tandem with another fort, Visapur, overlooking the Pavna dam.

It barely took us an hour to climb 442 (yes, I counted!) steps, give or take a few. Although the steps themselves were not steep, the climb was made difficult by the water flowing down the steps from above which made it quite slippery. Despite that, we saw several young kids join their parents in climbing the fort. If you drive, or get a drop till the base of the fort, climbing the fort, even for kids, is not difficult.

On the way to the top. The body of water is the Pavna dam. 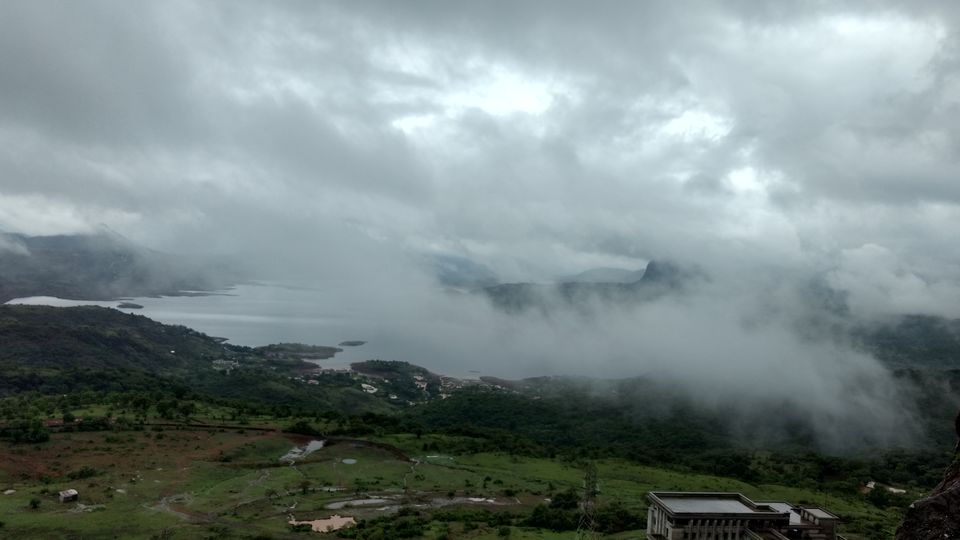 We stayed at the top for quite a while exploring the area. We even went to the very edge of the fort, christened Vinchukatta (Scorpion’s tail), owing to its near resemblance. The approach to this part is a little difficult, especially in heavy windy rains.

On one of the edges of Vinchukata. We could hardly see ahead or even down. 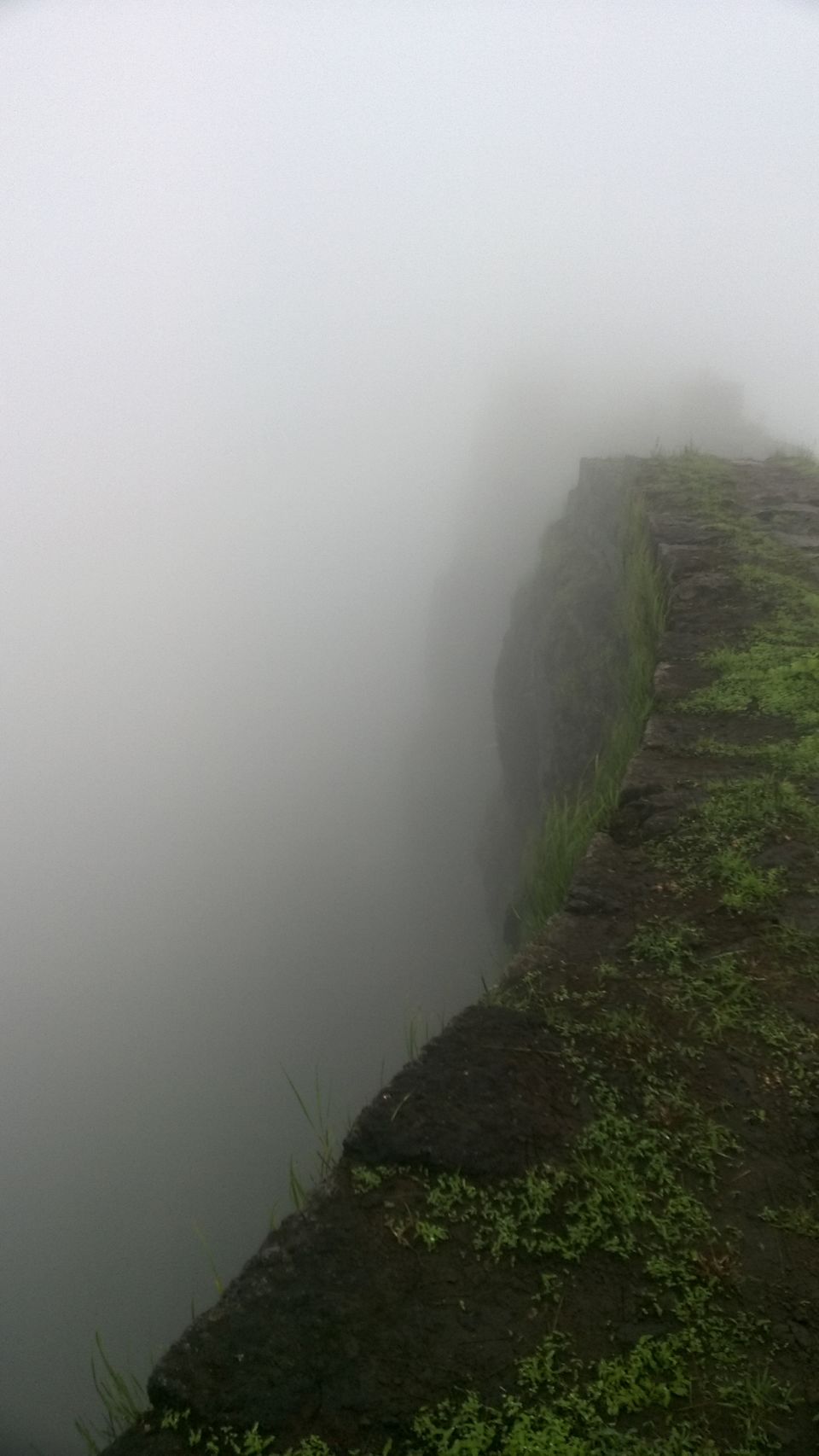 As you look up to the actual summit from the Vinchukata. This part is quite steep 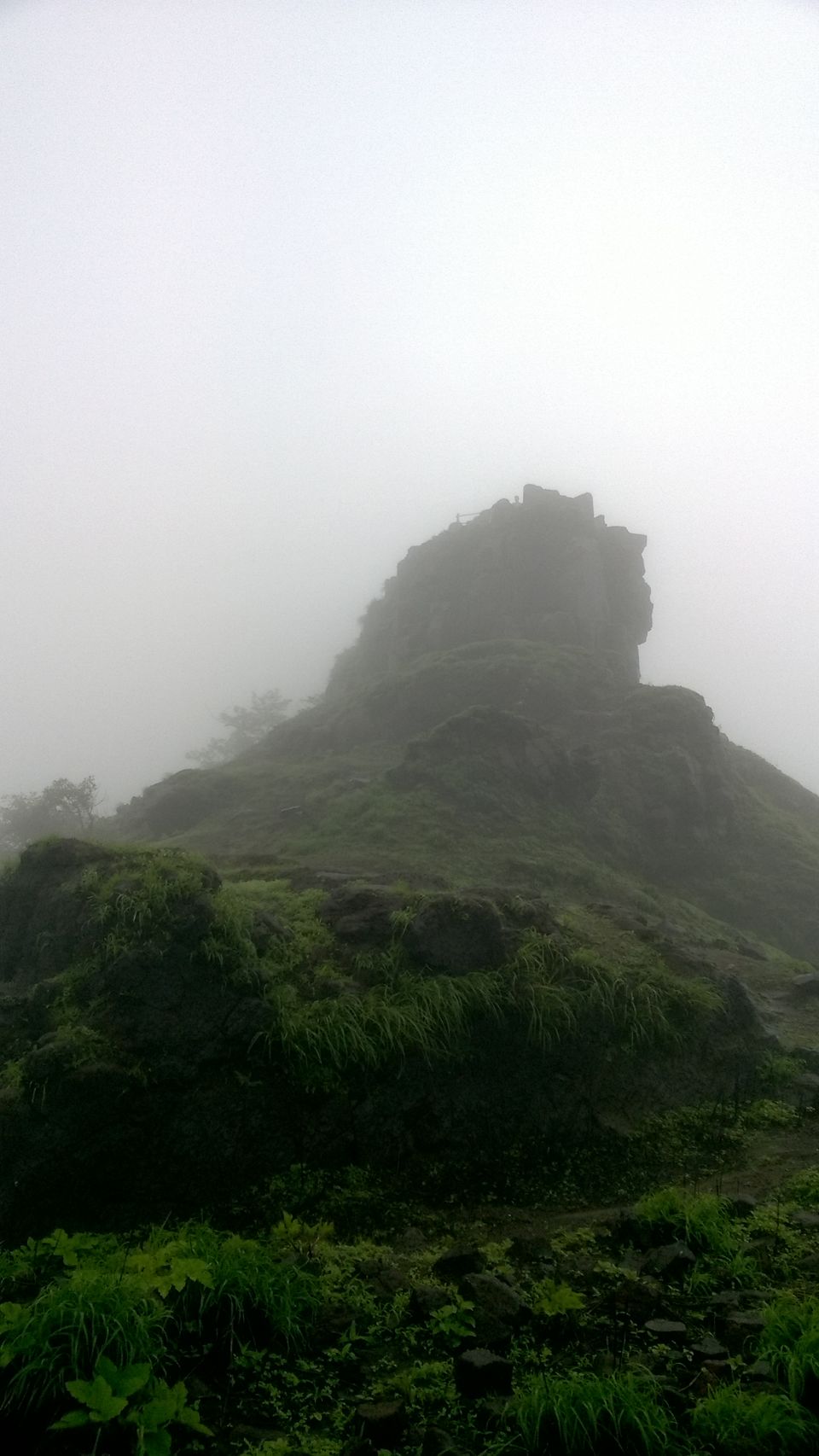 The only disappointment in the entire trek was when we couldn't enjoy the view from the top owing to the mist.

And I took one of those rare selfies, nothing else visible to capture. 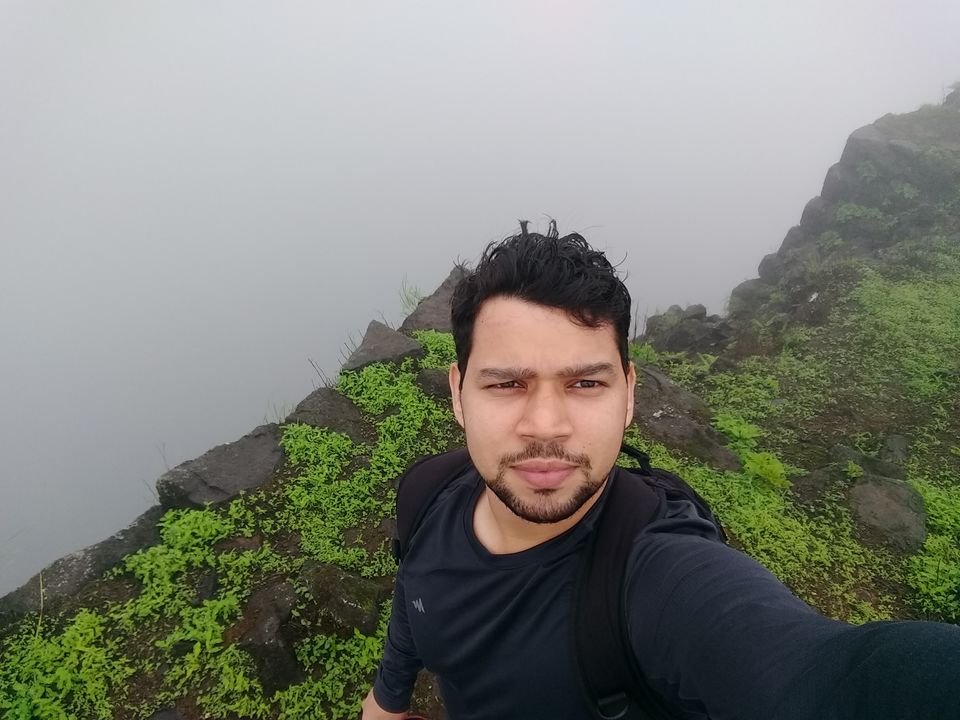 We climbed down the fort quickly enough and barely an hour to the station. It was downhill all the way. And we took a couple of short cuts. Okay, more than a few.

Saw the waterfalls packed on our way back as the skies had cleared considerably. We didn't feel like venturing in. 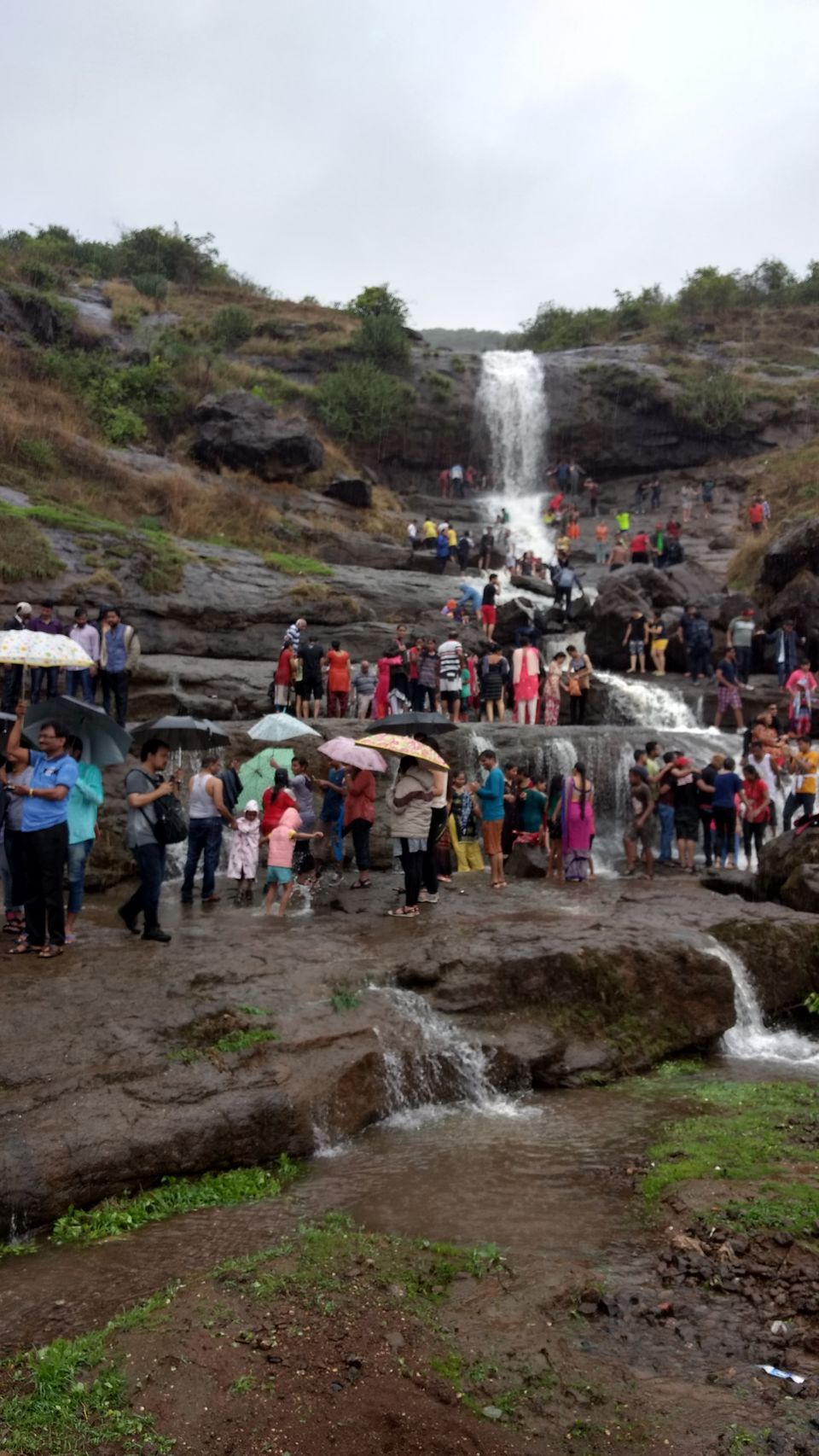 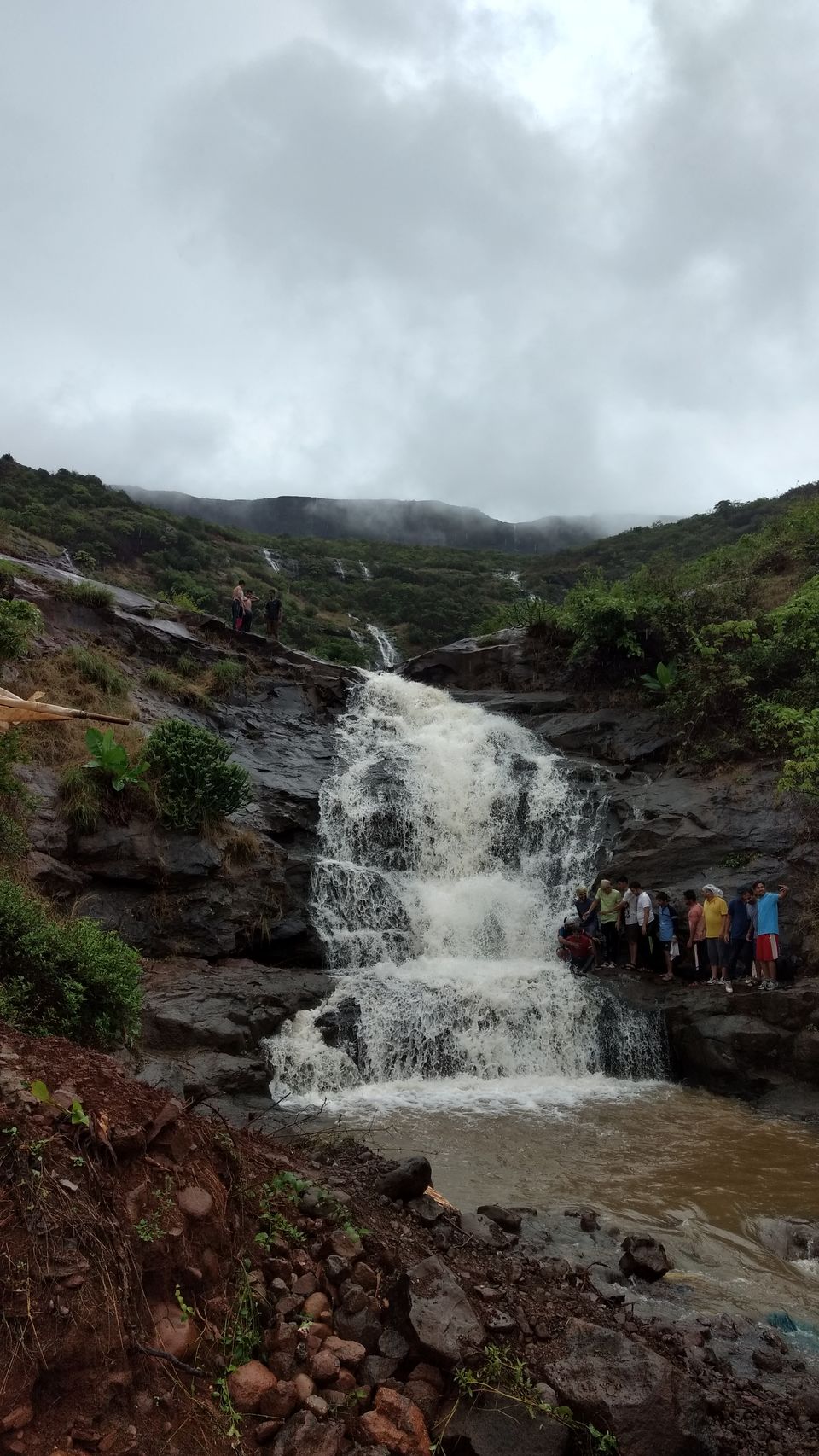 We took the same Pune-Mumbai Intercity (12128) back to the city.

Note: One can avoid the train journey and the walk and reach the fort base directly. Although Google maps suggest a route via Lonavla, it is usually jam-packed during the weekends. 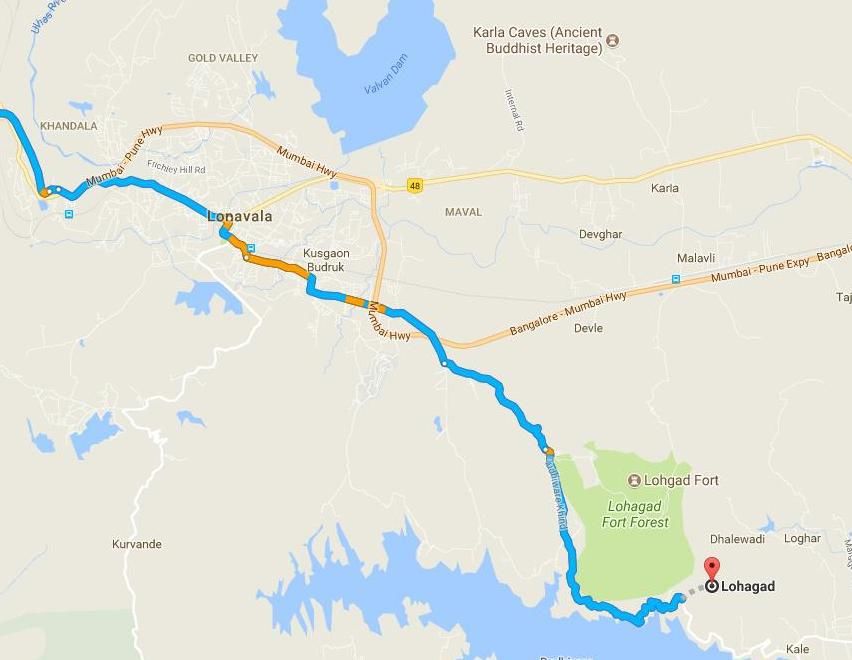 Do not follow the Google maps suggestion (Read how Google Maps work). 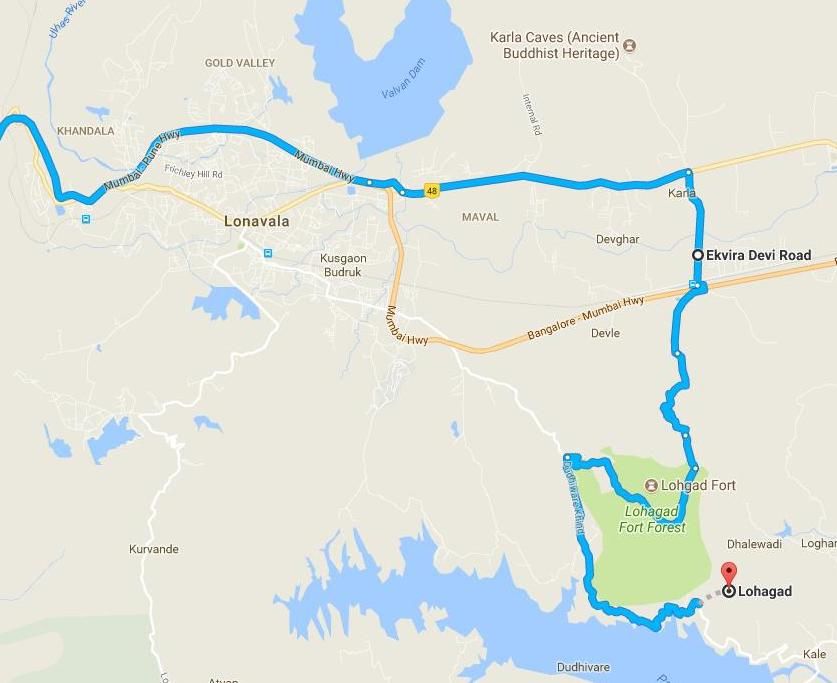 I suggest you get off the Mumbai-Pune Expressway ahead of Lonavala and drive straight towards Karla. The Karla road is much better, in terms of traffic and the view.