Guess What? The Most Convenient Weekend Getaway From Delhi Is Orchha In MP

To keep your weekend getaway from Delhi strictly a weekend affair, travelling to Orchha in MP (Madhya Pradesh) is a foolproof and dependable plan.

For some of us travelling to this lesser known town in Madhya Pradesh would seem like a unfamiliar choice. But my last weekend's getaway to Orchha was one of the most convenient travelling experience from Delhi.

To take a break from travelling to the hills this winter, you can follow our travel plan that will make sure you are back in the city for the Monday morning battle.

How we planned the trip to Orchha in MP

Trisha, Archit, Tanay and I were the final group of four who were certain on leaving Delhi for the weekend. To go up north on the map would mean battling the uncertain weather situations and even snowfall. December certainly is the best time to explore central India and give Madhya Pradesh a chance. Taking the inspiration from one of the Tripoto blogs about Orchha, we agreed upon travelling to this quaint little town just across the UP border in Madhya Pradesh.

The only plan we followed was to book tatkal tickets for four on Thrusday morning. The one IRCTC specialist amongst us made sure that the return tickets were booked for Sunday night.

The erstwhile capital of the kingdom of Bundelkhand in Central India, Orchha is a sleepy town caught in a time warp, still sustaining the age old myth that describes it as the city ruled by the hindu god, Ram. Orchha is the only town in India where Lord Ram is worshipped as a king and not just a god and this short myth essentially defines the unusual town of Orchha we travelled to.

Bundelkhand is the land of the Bundela Kings. What’s interesting for Orchha in MP is that every Bundela king had a fascination for architectural engineering. Most of the kings of the dynasty continued building incredible forts, temples and palaces around this town.

Here on the map you can also see the fascinating green patch of Orchha Wildlife Sanctuary surrounded by the Betwa River, another addition to your Orchha itinerary.

How We Reached Orchha?

We took an overnight train from Nizammudin Railway Station, Delhi to Jhansi and watched the sunrise over Uttar Pradesh’s flat topped hillocks.

Jhansi is the well-connected by buses and trains to all the major cities in India and shared taxis, autos and buses from Jhansi Railway Station run regularly to Orchha. It's a delightful 45 minutes ride (Rs. 300, auto rickshaw) from Jhansi to Orchha, views along the road that will surely make you peeping through the windows.

Our Weekend Itinerary For Orchha in MP

The four of us reached Jhansi at 7am on Saturday. We took a local transport to Orchha. The first sight of the cenotaphs assured us that this pick from Tripoto's search page was indeed the right choice.

We reached the Orchha in the morning and spending the early hours by the Betwa riverside seemed like a good plan. Right before us stood the mighty cenotaphs (chattris) of Orchha, the obvious first spot to visit in this town. Constructed by the Bundela kings in the 16th century, this is indeed an awe-inspiring structure that gives a certain look of grandeur to this town. 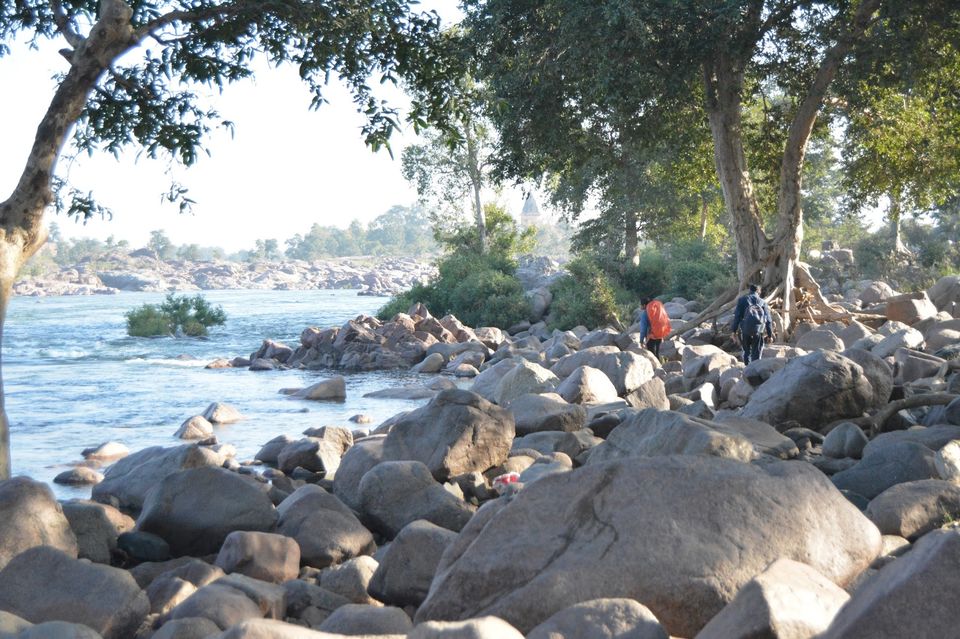 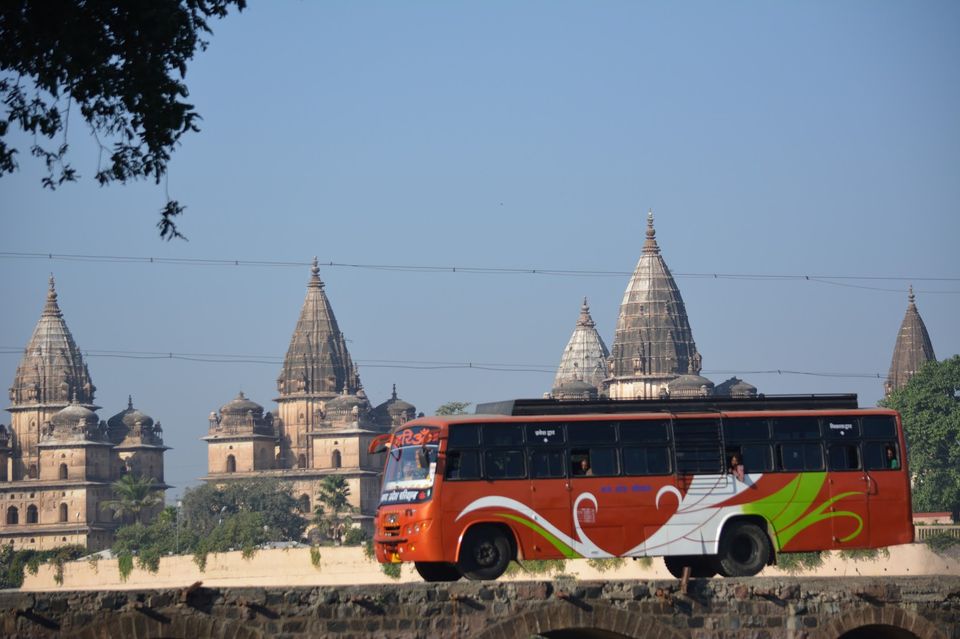 Travelling during demonetization meant that we had to book the hotel online. The Orchha Resort, our top pick for accommodation in this town, boasts the stunning view of the cenotaphs in the background, the freshly cooked and locally sourced food and a clean and comfortable stay. 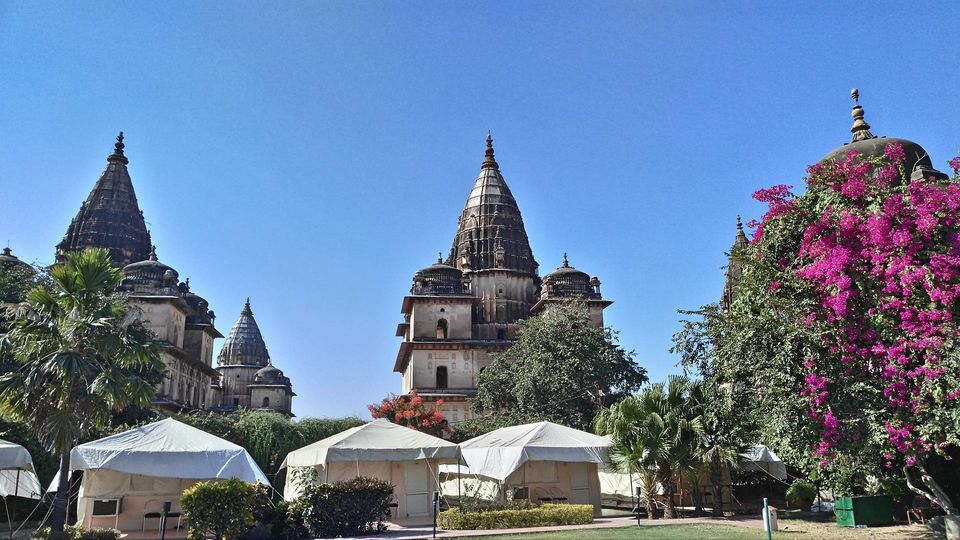 Later in the day we visited the Chhatris located near the Kanchan Ghat on River Betwa. The 15 cenotaphs are a symbol of lineage of the Bundela Dynasty. The height of the chattris vary in sizes and symbolize the time period of the reign of each of the Bundela Kings. 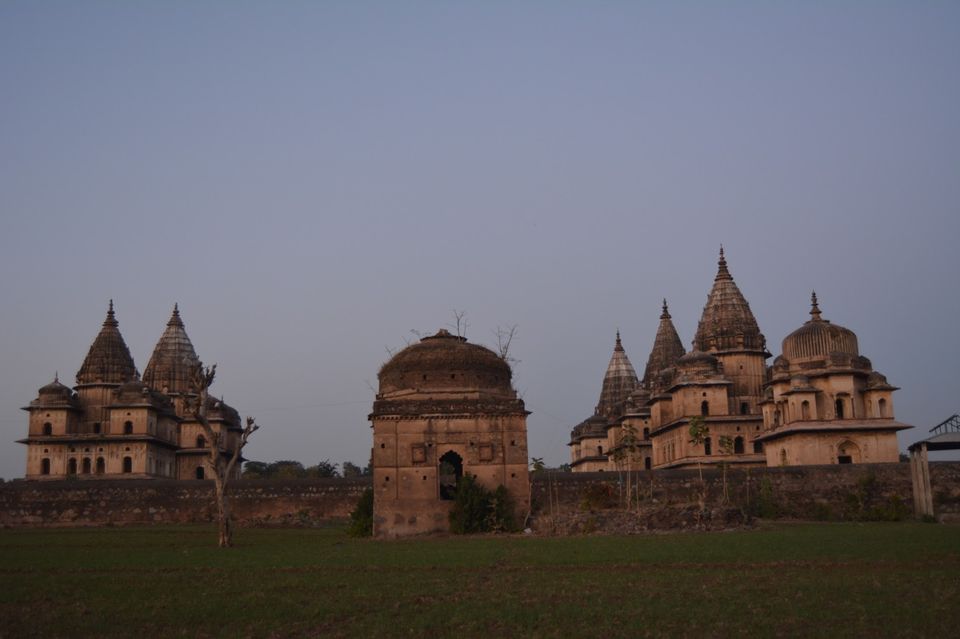 We chose to stay at the Chattris and enjoy the sunset but for travellers looking for an adventure, rafting on the Betwa river can be an exciting option. The water was relatively calmer during December but floating down the river is an unmissable experience. 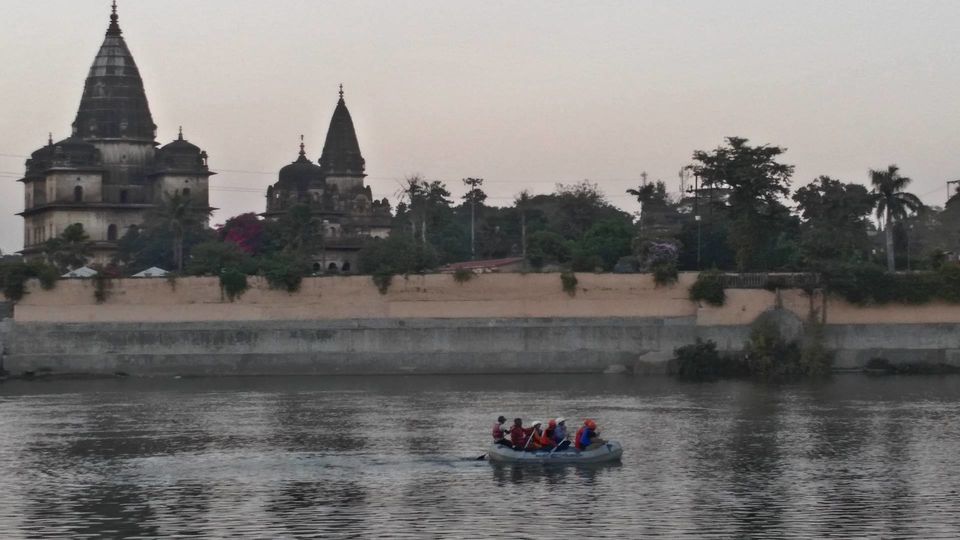 The light and sound show at the Orchha Fort at night became our introduction to the unique history of this weird little town. This show is an important recommendation. It takes you on a journey through history through anecdotes about the lives of the Bundela kings and how the architectural marvel in this small town were raised one after another. Timings: English, 6:30 PM, Hindi, 7:30. 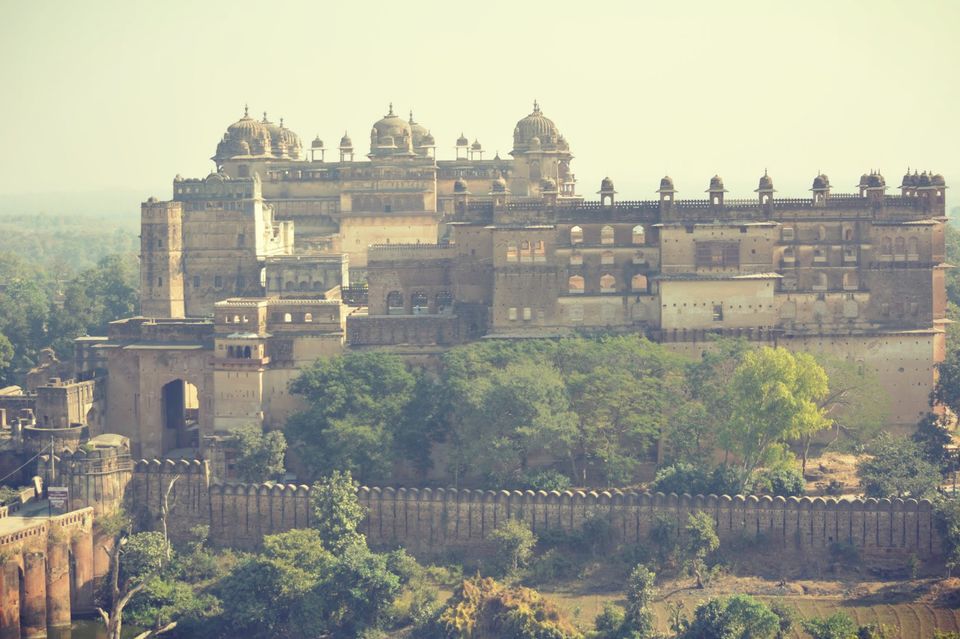 Our Sunday morning at Orchha began with a hunt for bicycles. We finally rented four bicycles from the office at the starting point Orchha Wildlife Santuary. Other option to rent bicycles could be Orchha Tourist Point (OTP), a recognizable store at the Orchha main road. 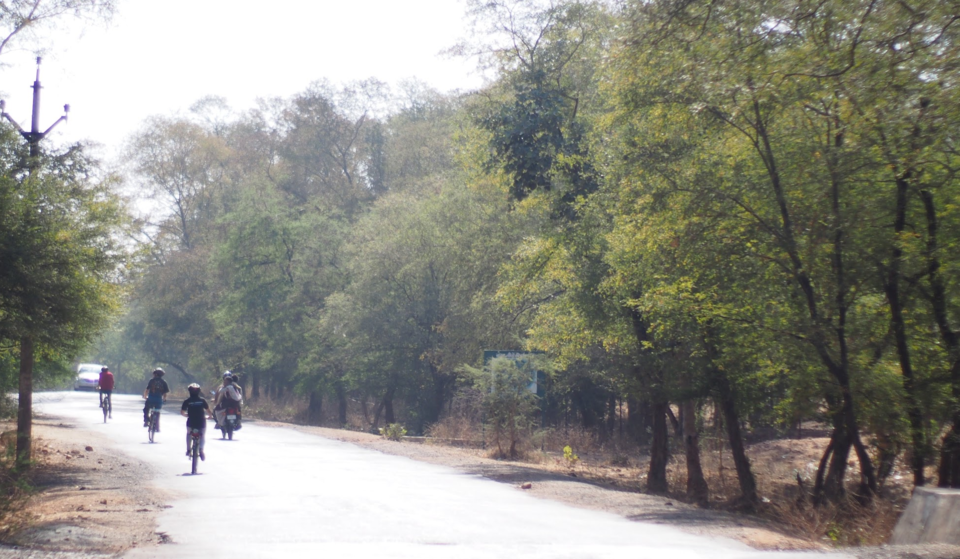 It's an absolute delight to cycle through the 46 sq.km vast wildlife sanctuary at Orchha. For nature lovers, bird watchers and photography enthusiasts, this untouched corner at the heart of India should be high up on your bucket list. Manoeuvring our rented bikes through the narrow one way bridges connecting the sanctuary to the town was one of the most thrilling highlights of this trip. 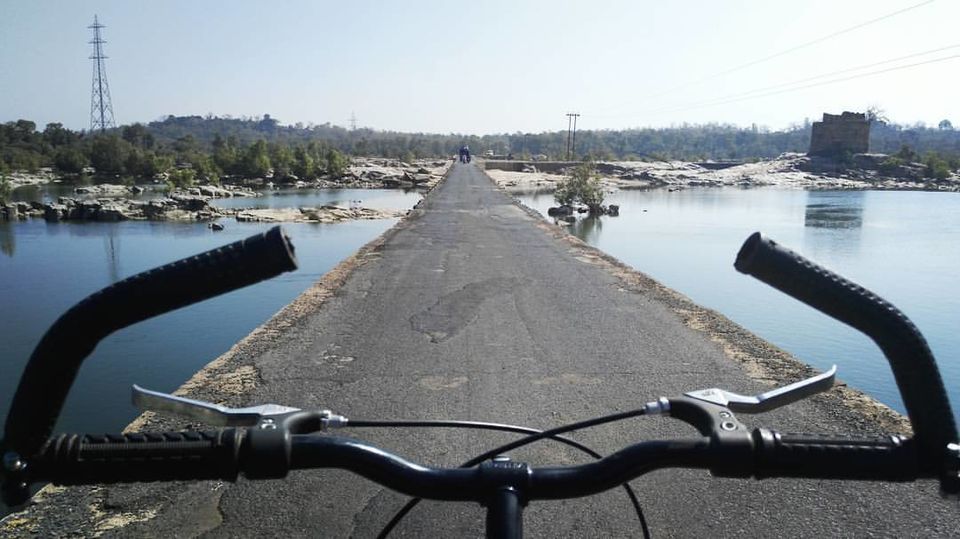 Later on this this day, Chaturbhuj Temple was the next stop. This temple at the heart of the town is surrounded by small yet exceptional local shops and eateries that call for a much needed food tour around Orchha before you visit the temple. 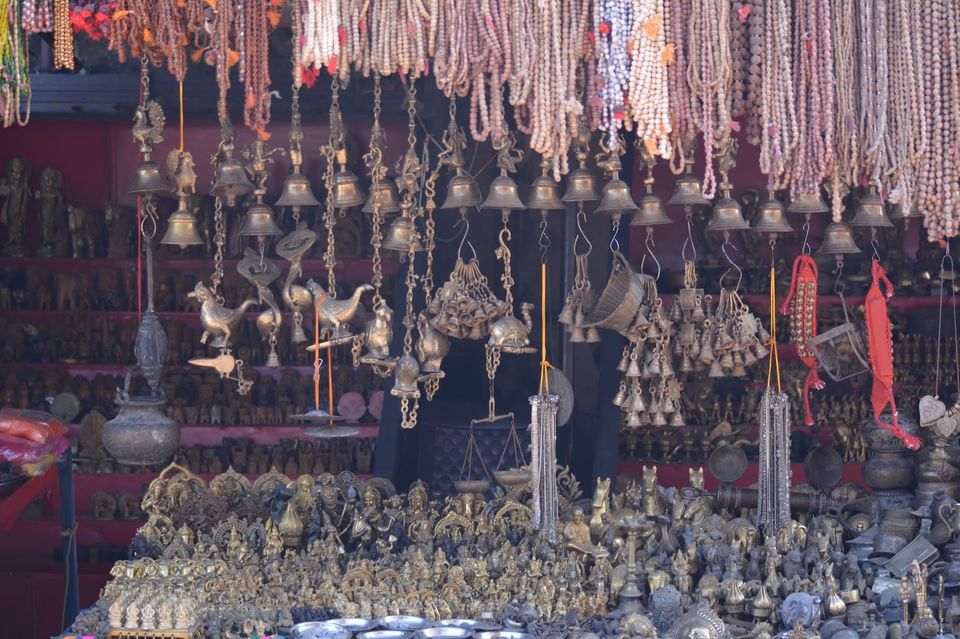 The Chaturbhuj temple is a maze like structure with winding stairs leading you to the terrace that offers a bird eye view of the entire town. All the forts and temples around this small town are visible from this vantage point and amidst the shadows of the temple towers we spent hours watching the entire city going about the day at it's own pace. 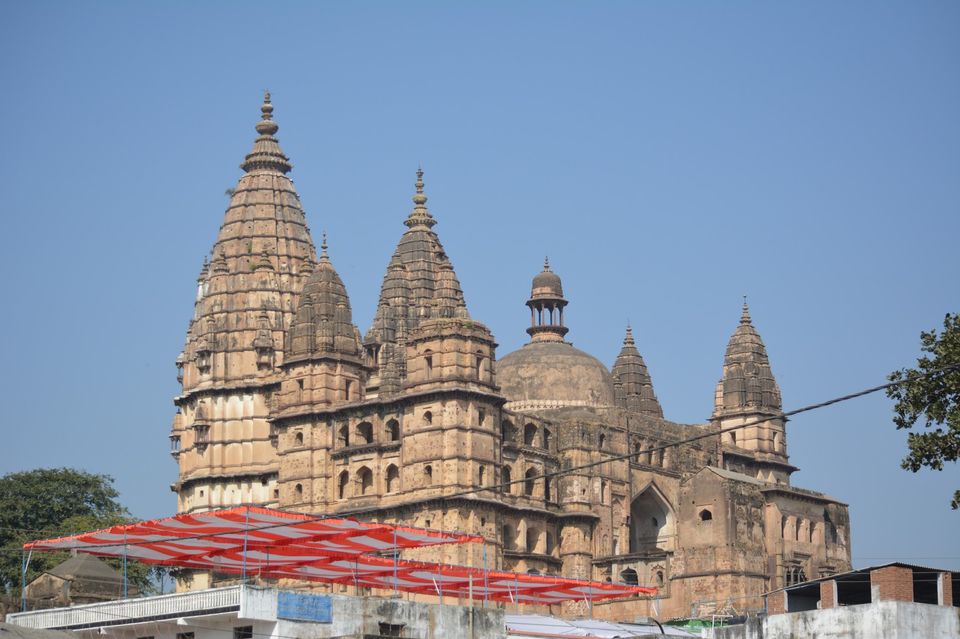 Far in the horizon, we could see the Laxminarayan Temple. What makes it stand out is the unparalleled architecture that resembles none of the other temples we'd ever seen before. The structure resembles a fort and the dome is inspired by the Mughal Architecture of the 18th century. 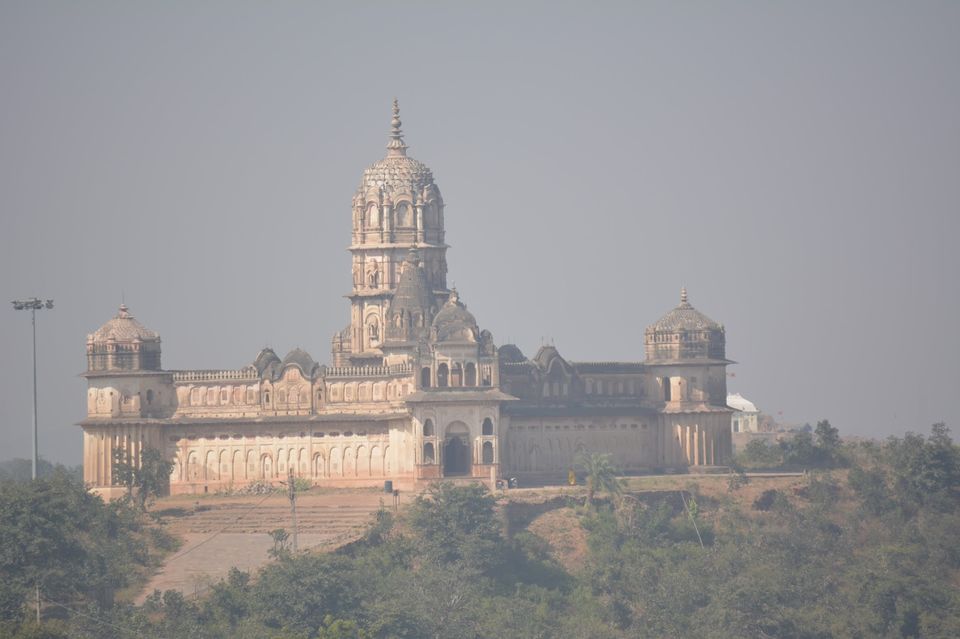 Next stop for us on this eventful Sunday was Hardaul’s Palace. The narrow lane that starts from the centre ground near the Ram Mandir led us to Hardaul's Palace. On the previous night at the light and sound show, an anecdote about the unjust assassination of Prince Hardaul of the Bundela Dynasty intrigued all of us. Here's the story for you. 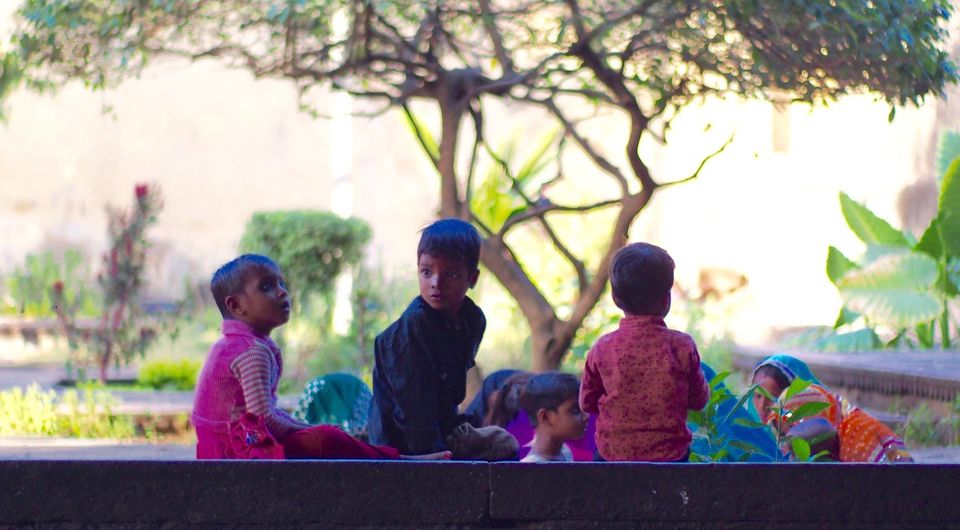 Hardaul's Palace now serves as a quiet corner in this town for locals to sit and enjoy the evening midst the thick shade of trees with countless monkeys as lively companions. The two towers near the palace known as Sawan and Bhado are symbols of the ingenuity of the erstwhile kings who ruled this land. The towers or dastagirs were constructed as a part of ancient air cooling system that help catch and channel cool air down to the palace corridors. 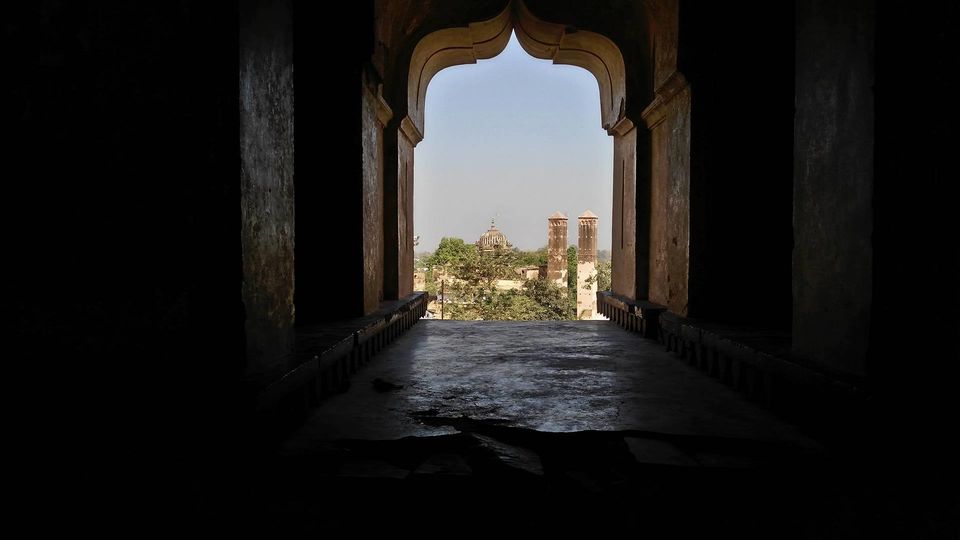 We left for Jhansi an hour before the train departure. It was yet another day to witness the pristine winding road back to Jhansi.

Travelling during demonetization had left us with one important lesson. The major expenses on your trip are for accommodation and transport. These two things must be pre-booked while travelling during these crisis months. Keep all your cash in one place, so that you have a fair idea about how close you are to your depleting budget. 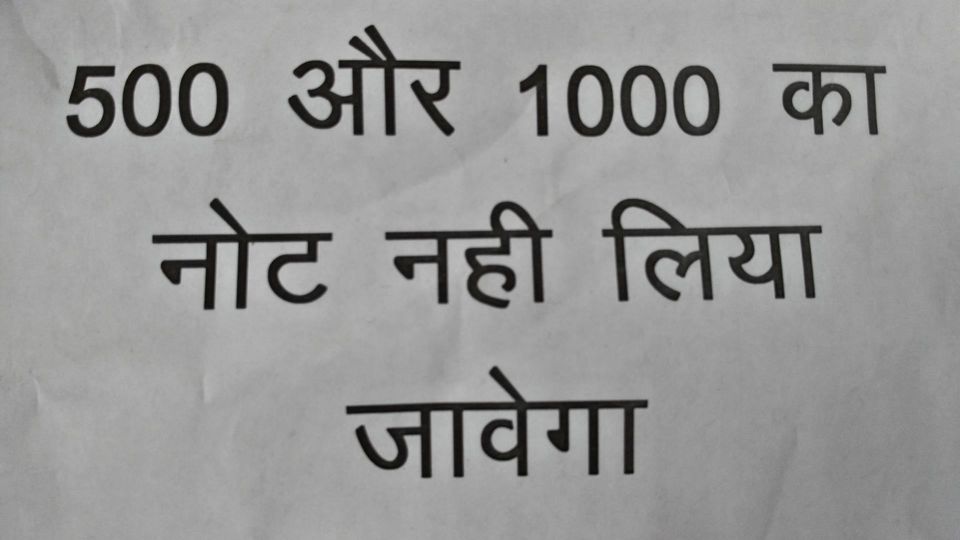 During our trip to Orchha, we relied heavily on the goodness of the people of this town who helped us on many occasions during this cash crunch.

This spot right at the heart of the country is not just a spectacle because of the historic forts and temples. Orchha also deserves acknowledgement for the hearty, honest and welcoming locals that made the trip all the more special for us.

Have you been to Orchha in MP and visited all it's little corners? Write more about the hidden gems in the town and share your insights with travellers who want to visit Orchha.