History is just the beginning!

By Nikhil Kambale
After my mains examination of Civil Services in December 2014, I had decided to pursue my hobby of travelling to different places; however, due to lack of planning I could not do so in 2015. I was at a loss when it came to motivation at the beginning of 2016; but the truth is you have to see some of the world in order to start craving for the rest of it.  I’ve decided to make out time for at least 10 trips this year. No matter how small-long, no matter if its bike, car or on foot, no matter if it’s a group of 10 people or all alone!
I am going to make this year a memorable one with vivid experiences I shall gain through these 10 trips. I will keep posting about my travel adventures from time to time.
So here’s my first trip of the year.
TRIP#1 Raigad Fort
It was getting really tough to get some time out of my studies to go somewhere and refresh myself. Most of the times, I didn’t had time, when I had, my friends were busy. I guess this is a sign that we’re growing up. Fortunately, this time my family came to the rescue! They wanted to do Ashtavinayaka Visit this year; it is a trip involving visit to 8 Ganesha temples situated in Maharashtra. (I’ll give detailed itinerary of that trip later if anyone is interested). So I had to plan this whole trip and fit it into 3 days time.  While planning, I realized that after last Ganesha temple of Pali, we can go to either Raigad or Mahabaleshwar on our return trip. Mahabaleshwar is too mainstream and crowded. I had never been to Raigad, the fort which was the capital of Maratha Empire established by Chh.Shivaji in 17th century. Being a History enthusiast, historical places always fascinate me. The choice was simpler now; we headed to Raigad from Pali.
Itinerary:
We had a sumptuous breakfast at Pali and headed to Raigad fort at about 10:30am. As per the directions given by Google map, we took to the National Highway 66 (Mumbai-Goa). There was construction work going on highway converting it into four lane highway, so we had to face a little discomfort during journey.
We reached Mangaon in an hour; from there the map suggested to take left turn towards Raigad. It was a really narrow road with so many steep turns and a small ghat segment in Sahyadri ranges. The road work was still going on. I won’t suggest this route unless you’re fond of off-road driving and possess a really good vehicle for the same. Instead, you can straight way go to Mahad from Mangaon and take Mahad-Raigad road which is way better and safe.
There are approximately 1700 steps from base to Raigad. We had reached there at 12 noon so it was wiser to take the rope-way to get there to fort. I must say, rope-way at Raigad is a hell of an experience! You can see all Sahyadri Mountain ranges around you. With winds roaring around and people screaming it’s no lesser exciting than other expensive sports like free fall and bungee jumping. Rope-way is cheaper too! It costs Rs.200 per person for a return trip.
There are many other attractions at Raigad   like Hirkani Bastion, Lakes like Elephant Lake, Kolimb Lake, Palkhi Darwaja, Naane Darwaja, Tomb of Jijau (Shivaji’s mother) etc. Due to lack of time and scorching sun above head, we couldn’t visit these places.
For foodies, there are many resorts managed by village people which serve authentic Maharshtrian food. It is advisable to order in advance to avoid disappointments.
It is advisable to visit Raigad during winter. Start trekking early in the morning. Detailed visit to all the points may take 3 or 4 hours, which is worth it.
Maratha Empire was the most powerful empire after Mughals. Chh.Shivaji Maharaj, with the help of his soldiers from all religious groups built this massive empire in 17th century. His Guerilla tactics of warfare are globally appreciated. After this visit one can understand why Maratha couldn’t be defeated by Aurangzeb. It makes you feel proud of the legacy we’re carrying on. As someone has said, without appreciating your past, you cannot make your future.
Next Month, I’ll come up with another trip. Peace out!

HotelsMap
Raigad was the capital fort of Chh.Shivaji since 1674 A.D. Raigad is one of the well preserved forts of Maratha Empire. It is situated in Mahad taluka of Raigad district. The fort is at height of 2700feet above sea level.

HotelsMap
Raigad was the capital fort of Chh.Shivaji since 1674 A.D. Raigad is one of the well preserved forts of Maratha Empire. It is situated in Mahad taluka of Raigad district. The fort is at height of 2700feet above sea level. 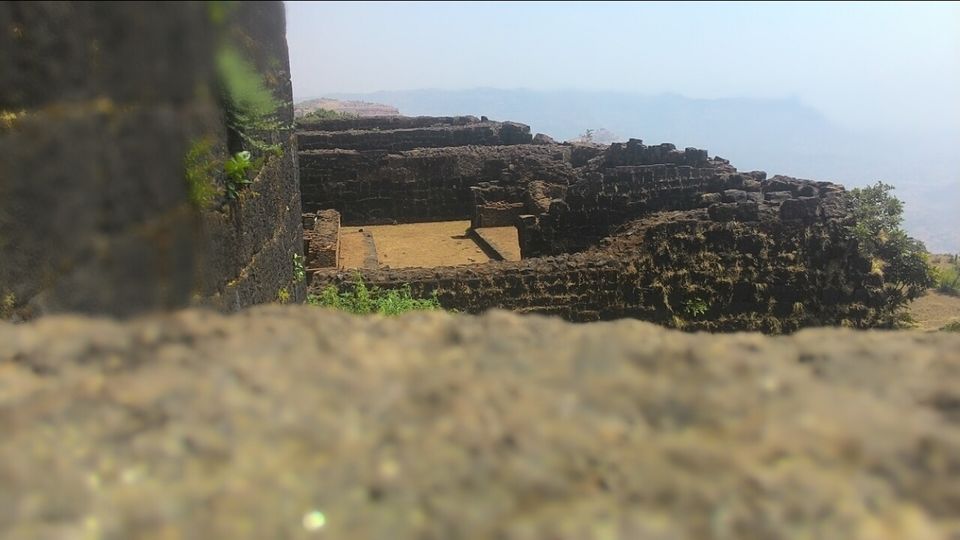 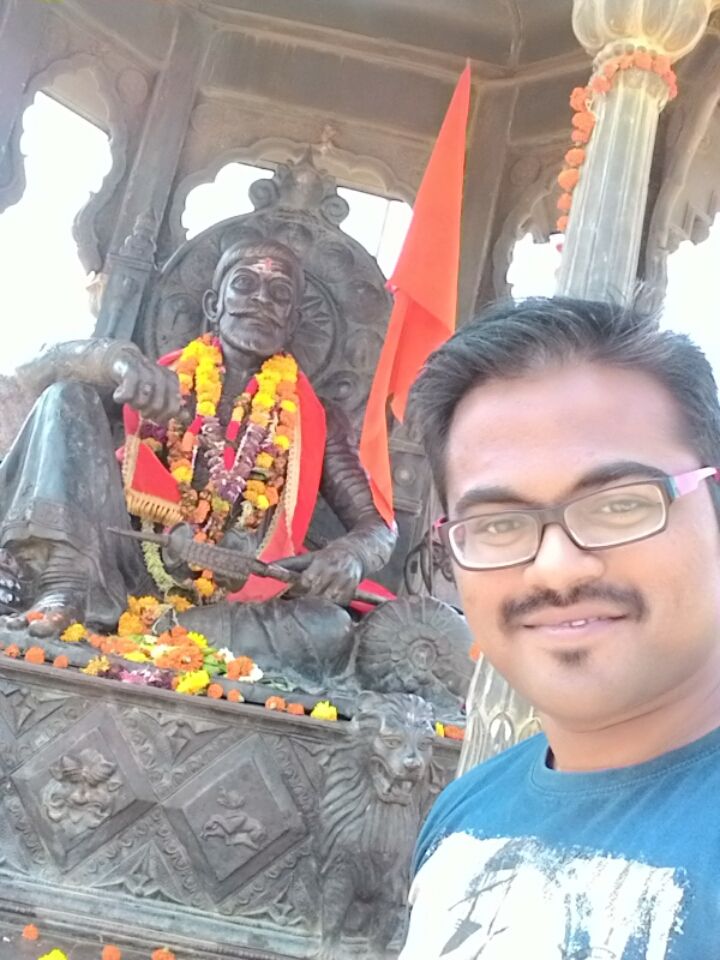 The controversial statue of the dog named Vaaghya 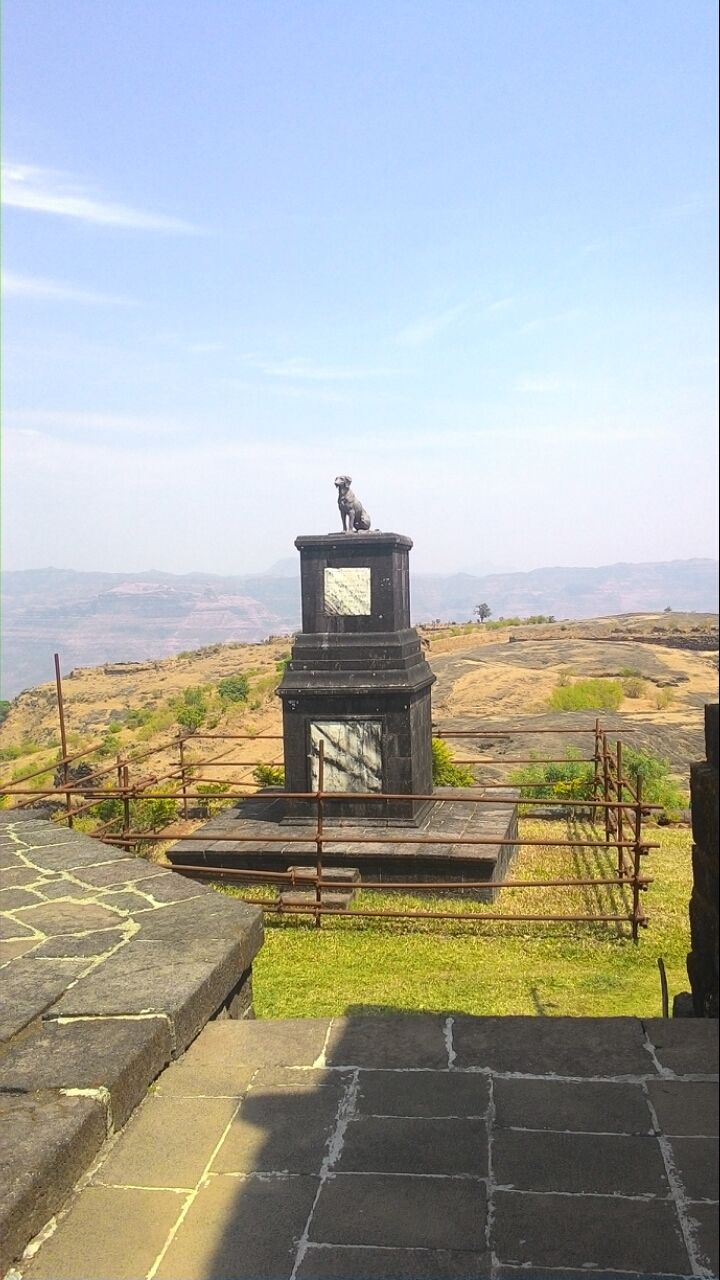 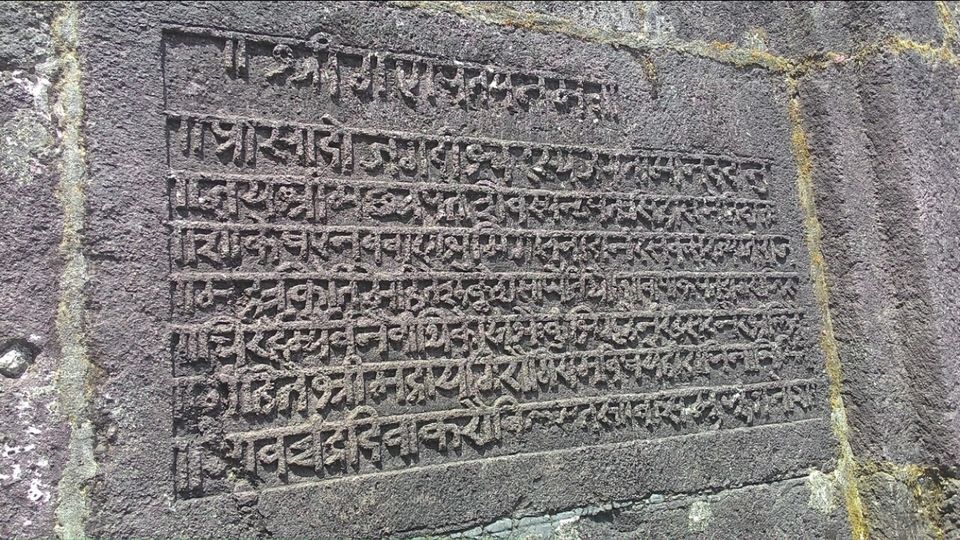 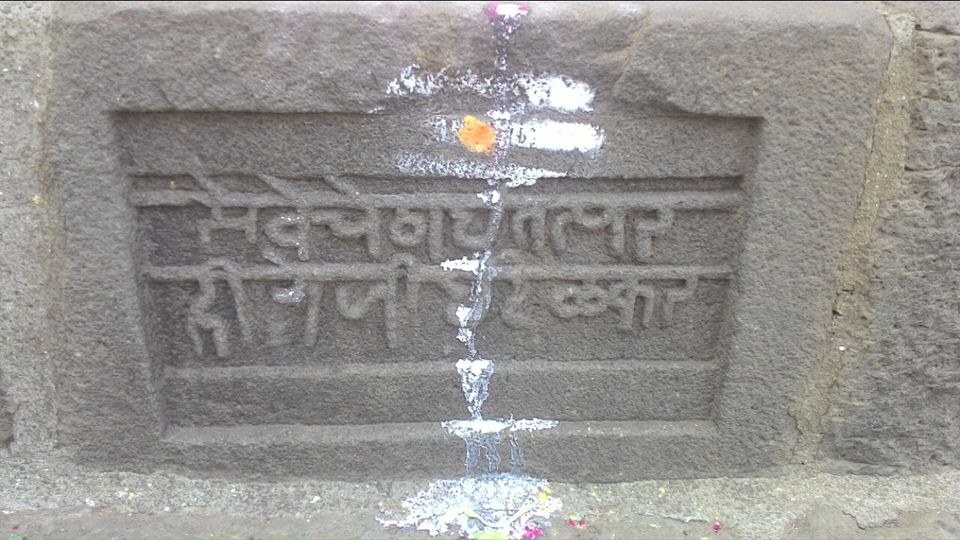 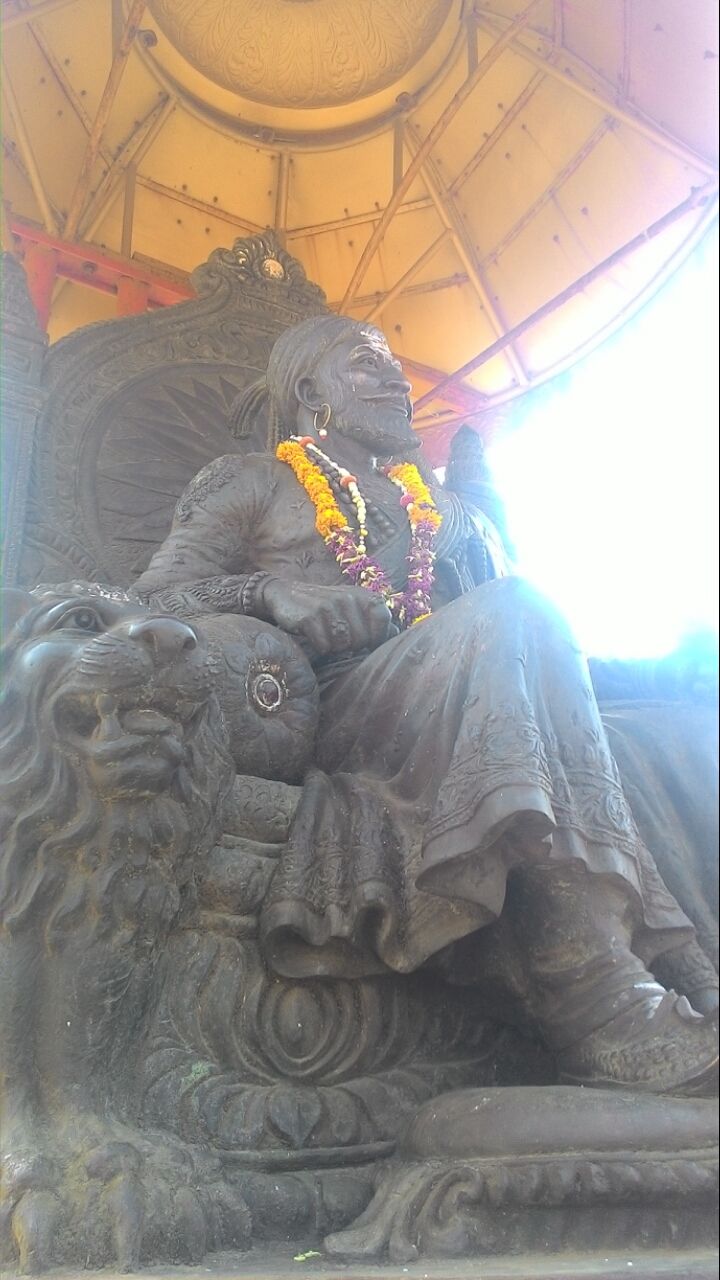 Map of the Raigad fort 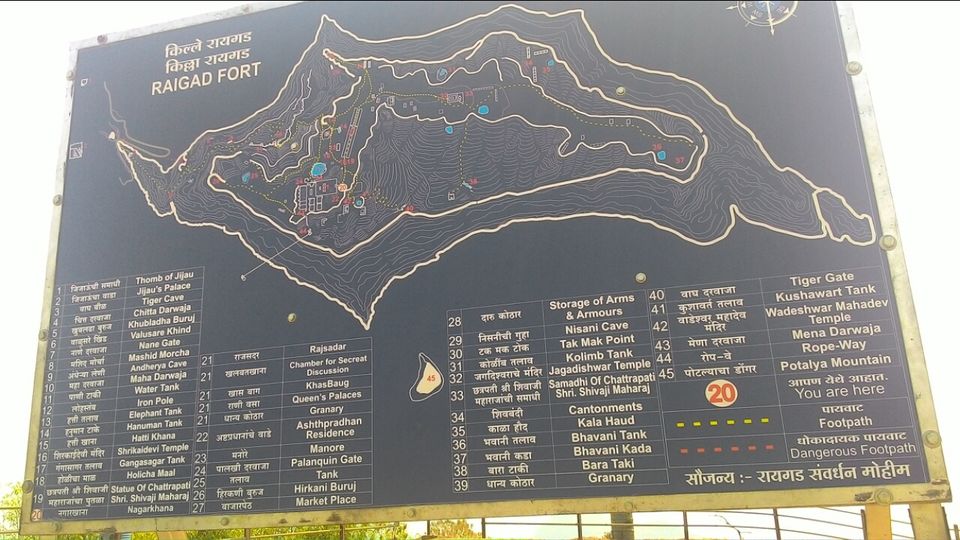 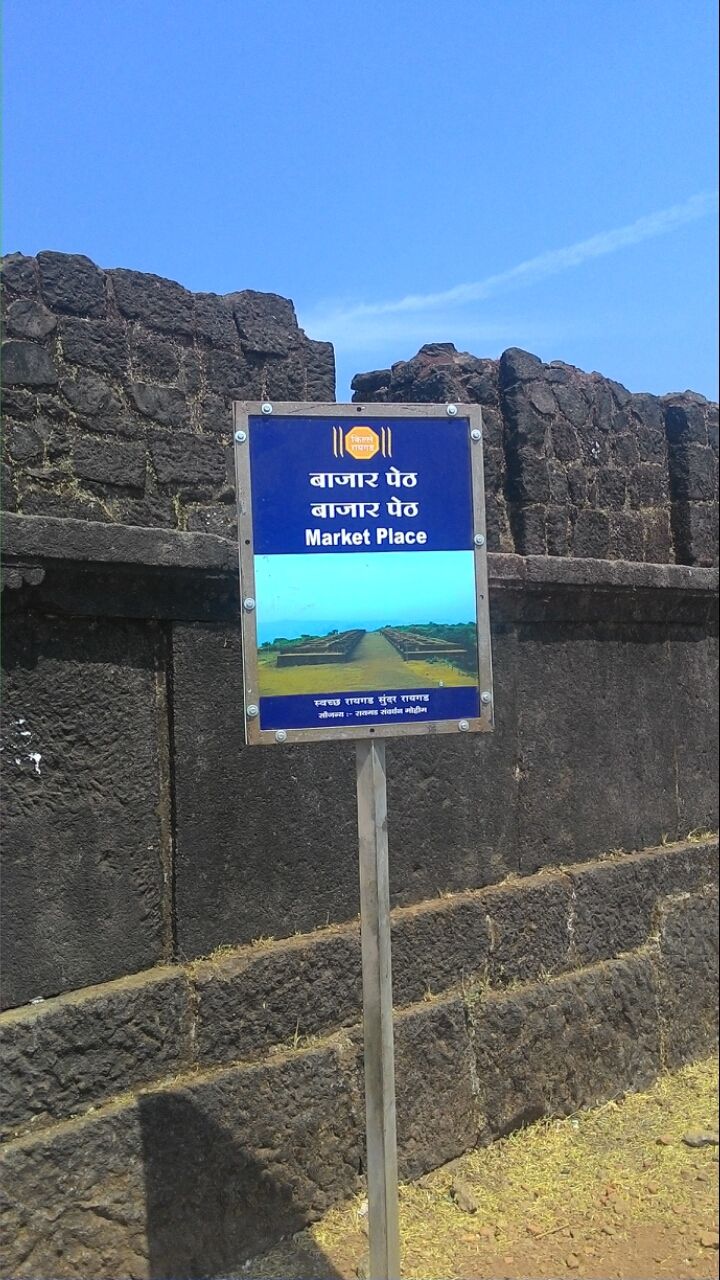 Stunning view from the Samadhi