What an overnight trip of spending Rs 500 gave me

They say, you need lots of money to travel. No, you do not.

Travel is not as expensive as you think.

Here is an account of how I spent Rs 500 on an overnight trip and had the best experience.

Mixed feelings had set in already

Friend’s friend: Why do you guys have to travel like this? Why cannot you book in advance? We are wasting so much time!

Friend: Ummm. We will find a place for the night. Do not worry.

In her head ,she seemed nervous. What if the two boys who were traveling with us did not like the way we traveled? After all, she was the link between the three of us.

Changing the topic she said,I need a place to pee.

But in the middle of the pee pressure, I was shit scared. Did I ask myself was this trip a mistake? Should I have planned before?

My head popped my biggest fear as a traveler. The fear of traveling with people who are totally opposite of the way I travel. What if I end up having a bad trip? Instead, what turned out to be was a trip no internet search would have ever provided.

We were in Chincholi Morachi, a district in Maharashtra ,55 km from Pune, known for spotting peacocks.

We thought it would be best to explore Chincholi through the eye of a local person.

That is one of the best travel lessons I have learned- In locals you should trust.

This time, there were not many people around to even ask.

With all of this going on in my mind and a strong built-up pressure to pee, we found a government guest house after walking for some 15 minutes. I thought, I could free my pee. However, the government guest house wanted to charge Rs 500 as entry charge for us to pee. Which meant Rs 1000 for the two of us!(The entry fee included sight-seeing with food as well.It was passed lunch time and we did not want to waste money just to pee and come back)

We asked some hawkers near the government guest house if they knew a place to stay. They were essentially farmers and were kind enough to invite us to their home. However, we did not want to invade in anyone’s home without prior intimation.

We did not have the internet on our phone as we had reached a remote area. and network issues had started to pop up.

My friend’s friend came running from a place to a guy’s contact of a homestay. He asked a person at the local barber shop on the road and he guided us to Anand Farm house.

Another travel lesson I learned here-Travel if you want to move out of your comfort zone!

It was a weekend and one of the people at the farmhouse said that the place was booked and packed. However, when he heard we had already arrived, he said that he will make the arrangements. Within 10 minutes he actually came to pick us up from where we were.

That was what the beautiful experience cost us! 500 Rs. Unlimited food, pay whatever you feel like. The hospitality and the attitude of the 65-year-old man Anand, the owner of the farmhouse was someone did not yield him as much money from farming and he said that the middleman took more margin and not much money was given to the farmer.

To lead a sustainable life, he started the concept of village tourism by showing peacocks to tourists. Anna as he was fondly called, had a good business sense too. He was stern, firm and one would automatically listen to him. He said that he wants his guests to be homely and does not do this for money.

The local Maharashtrian food was so good that every now and then I would want to eat more.

Seeing the peacocks was the icing on the cake. We explored on bullock carts and had one of the most humble village experience. All we knew was Chincholi Morachi is a place in Maharashtra which has plenty of peacocks.

Had we planned in advance and booked one of the popular guest house through some internet research, we would have never got a chance to find w In fact when we were leaving the place, Anna said that we were like his daughters and we should come again.

What we thought would not have turned out the trip as we thought it be, turned out to become one of my best trip experience. The friend who was pissed off also became open to the unplanned and go-with-the-flow trip attitude!

The hobo feels it is good to get surprised by the place and it’s people!

Where is Chincholi: Morachi Chincholi is a town of dancing peacocks. It is said to have 2500 peacocks. Situated near Ahmednagar-Pune highway, it is about 55 km from Pune in Maharashtra.

Why you should visit Chincholi?: If you are looking to spot peacocks, want to have an agro- tourism sort of trip or want to be away from the hustle and bustle of the city, this is the place to be.

For more such stories you may check my travel blog : www.nostalgichobo.com

Chincholi Morachi, is a small town best known for spotting peacocks. It is 40 kms from Pune. 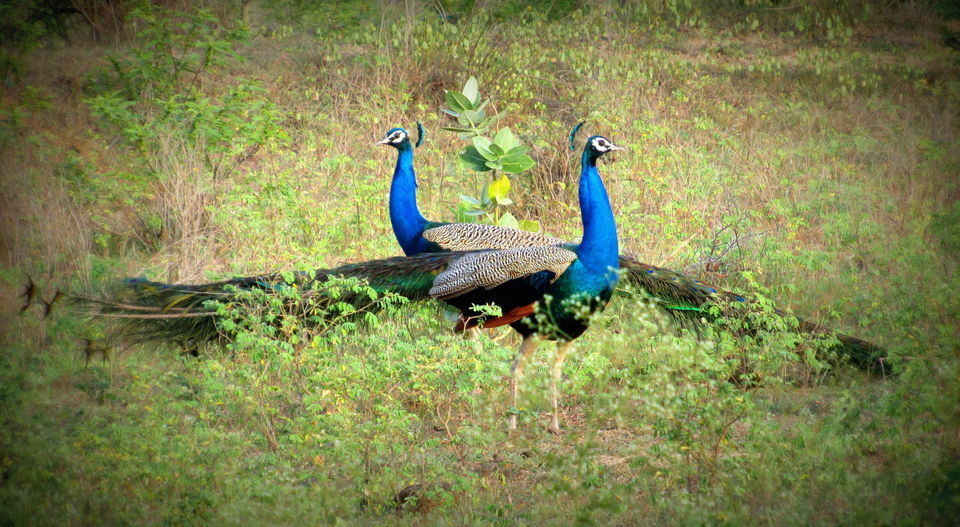