Kal'subha'i : The top of Maharashtra

Soul for many journeys 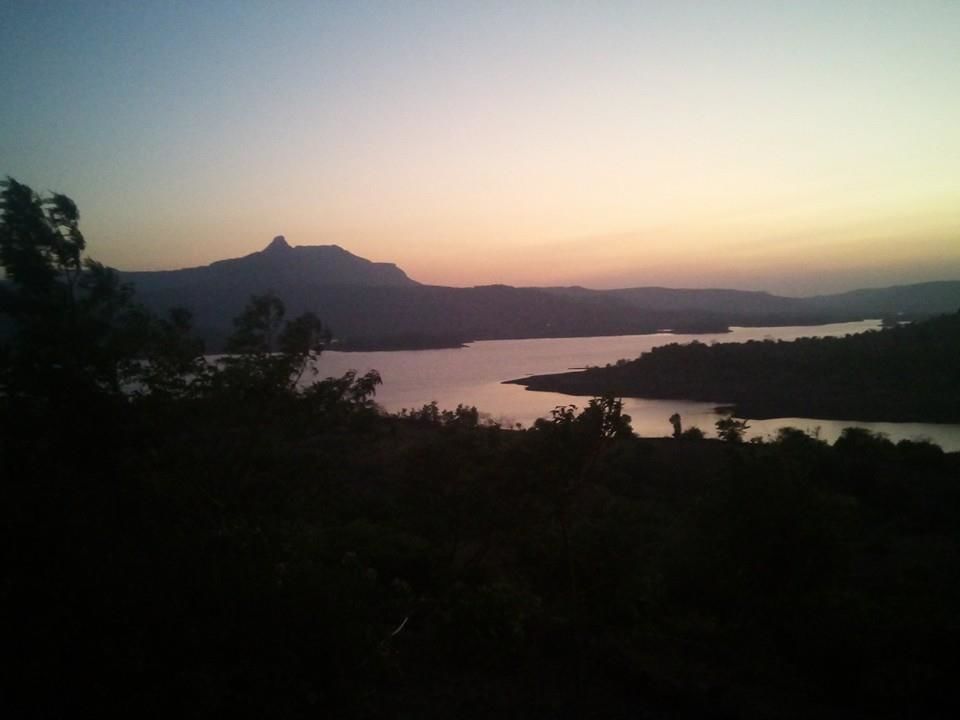 A lovely evening,tall mountains in the background,lush greenery all around,bright sunshine,an amazing rainbow and the hand of a beautiful girl in ur hand,isnt it a very romantic setting,not to be when u r finishing a tedious trek.Yes a trek it was to Kalsubai(tallest peak in Maharashtra).

It all started when I got a suggestion from one of our expected group members.Unfortunately she couldn't make it to the trek but we pay her tribute for it as the trek was not on our original list.

So we started on 25th Sept night at about 9'o clock.Actually we were supposed to have dinner.But then there was high disinterest shown from a generally committed friend.I managed to sneak into a restaurant and hv some rice.I wasant tht hungry but had to pass time.I also managed to force my friend to grab a bite.Meanwhile a guy came there searching for us.He was a friend of one of our friend.

Well if I go like this I myself may get confused.So d names,me S,my friend K,our friend D,her friend C and our other 2 frnds P and V.It was K's plan to meet at Vashi at around 9 and hv dinner.Nyways d post is nt bout d dinner.

Miss D who was our trek leader reached d scene at about 10.Poor C had been w8ting for us since 8-8 30.I was although not fascinated by d nos was happy enuf that at least 6 of us made it.We moved 2 Thane at bout 11.We had a train 2 Kasara which was around midnite from Thane .We had a lot of fun in d train.We entertained ourselves & a few others by playing cards.Time passed by a whisker and we reached Kasara by 2 30 a m.We started searching for any vehicle that would take us 2 Bari.We got 1.But rate was equivalent 2 a return flight.The plan was immediately dropped.D suggested we go further to Igatpuri whr there was more probability of getting a vehicle.We hopped on to a train in an illegal way.We dint hv ny other option.We reached thr by 3 30 and walked our way down an isolated lane which would hv otherwise been a busy 1 had we gone thr some other time of d day.We spent some time in a small temple besides d bus depot.The temptation for playing cards was resisted by us as we were in d temple.We got d bus by some 5 30 and were on our way to Bari.We took a nap on d way and when we woke up to see the picturesque scene with the sun coming out of d mountains in a hazy setting.We were enthralled by the site.We reached Bari by about 7 and got the 1st site of our Destination.It was high as we had imagined and thought would be tough enough to climb.It wasant.We set out for the trek grabbing a quick bite at some poha laden with worms and of course a sip of lemontea.

The trek was easy but tedious.We had climbed some 500ft when d first signs of fatigue emerged and it was no other miss K.Hands on waist she stood as if there was nothing else left in this world.I had expected this to happen,although not so early.With a look of discontent I inquired whether evrything was f9.With a slight grim on her face she said she s f9.I was concerned about reaching d top.We moved on.It was father than we thought.Meanwhile a cloud on the opposite side caused an illusion that made us believe it was a higher mountain than d 1 which we were climbing.We got over it and continued.Soon we reached the 1st man made intervention to the place,a ladder.We all climbed it with ease.Me and K were soon left behind by the others as we were quite slow.It was evident she was struggling.To be very frank evn I was struggling after d long hectic week,but it was not as evident from my body language as it was from her.But even after all this her determination to reach the top did not shatter 1 bit.Hats off for that.I have seen so may people give up but she didn't and I thought it was a great quality to possess.Nyways moving fwd we reached a well from where the top was visible.It was like a pit stop.By this time the others had already reached d top.I dished out some water and splashed it on my brow.It was cool and refreshed me to carry us both furhur,some 200 ft 2 go.Our fatigue was overcome by our jubilation to reach the top.Finally she made it despite of the hitches,we made it.I shouted a cry of joy.Yes we were there,top of Maharashtra.I paid a tribute to d 1 who gave this idea and regrets for all those who couldn't make it to such a wonderful place.We sat together in peace for some time observing the enchanting view of the surroundings.After having a brief photo shoot we opened our lunch boxes.We had cumulatively brought at least twice the amount of food we would hv required.Nyways we made our best efforts to finish as much as we can,but all our efforts were futile.The sun was already on our head by then.We wanted to rest but there was no place to relax under shade.So we decided to move down.Our way back was a long 1 but we were confident we would make it preety soon.So we made a move.It was decided K would lead us followed by the others,but d order soon reversed.And by the time we approached the well on d way they were already thru to the resting place.We reached d cool shady place some 10-15 mins later thn they did,and hardly got to rest as P was pushing us all d way.I was a bit jittery,may be nt as much as K but was still feeling d heat.I almost slipped twice-thrice.To make things worse a cloud hovered above us for about a while and then finally poured.We were unprepared for d sudden downpour.I quickly put my mobile and cam in d plastic bag to avoid them from getting wet.But d shower stopped as soon as I put it in my bag.And to our surprise we saw a stunning view.There was a rainbow right across d hills in front of us.It was as clear as we used to draw in our childhood days.It was an enchanting site 1 which I would nt forget throughout my life.It gave us a puff of energy to move fwd.We reached d base again by about 5 pm and rested for sum time.We caught a bus to Kasara and a train back to Mumbai.Yet another incredible trek.....