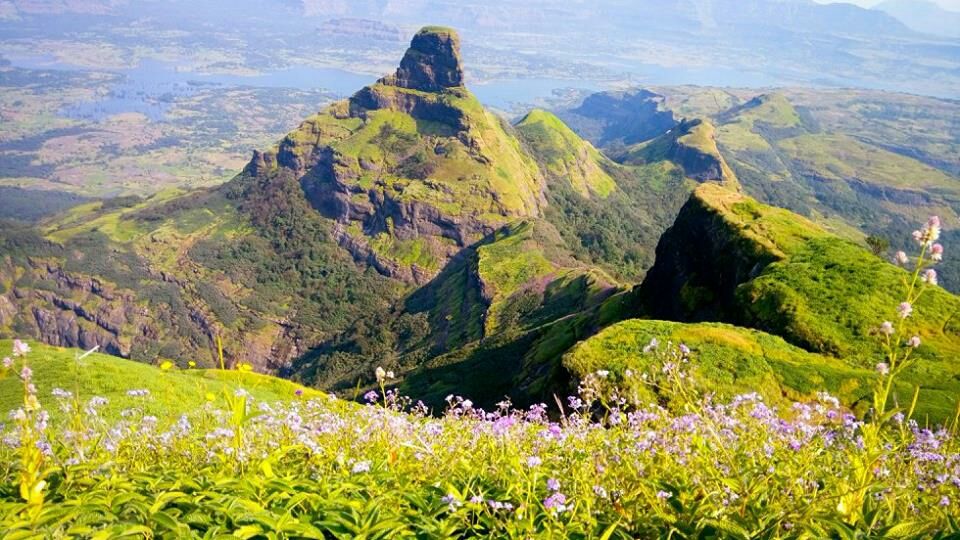 Have you ever felt like walking in the Garden of Eden. For one of the monsoon treks around Mumbai brought a little glimpse into what it would be to walk in paradise. Having already visited the Valley of flowers in Uttarakhand, little interest did I have to visit Kaas Plateau (the local valley of flowers in Maharashtra) considering the huge amount of tourists it had been attracting. So it was the hill fort of Ratnagad, which was the destination for the weekend. Ratnagad also known as the Jewel Fort of Maharashtra was considered to be one of the favorite forts captured by Chhatrapati Shivaji Maharaj. The fort at a height of 4250 feet lies in the Ahmednagar district of Maharashtra and is accessible from the village Ratanwadi. It is an easy trek of around three hours from Ratanwadi.

Our trip started by boarding the last fast local for Kasara where all the trek members were expected to meet. The trek was organized by Small Steps Adventures run by a group of enthusiastic adventure guys. After a few exchanges of pleasantries and a quick round of introduction, all fourteen of us were transferred to a jeep which was hired to take us to the base village Ratanwadi. The adventure actually began in the drive itself, with each one of us trying to make the best of every inch of space available within the jeep. Nevertheless everyone adjusted and made the best in true traveler spirit.

When we begun our trek under the full moon night of Khojagiri when the moon was at its shiniest best, little idea did we have of the beauty and surprise that awaited us ahead. We began our trek from the base village, walking under the moonlight by crossing some beautiful paddy fields and a river en route, the presence of which we could only make out from the sound of water splashing across the rocks. It was dawn when after some initial climb of an hour, we had reached a plateau which was supposed to be our first official break to catch the sunrise, it was a different thing that before this there were many unaccounted halts to catch up with our breaths.

As the sun rose, the darkness gave way to the sunlight revealing the beautiful gem the forest above contained. In no time we found ourselves surrounded by bushes of Karvy flowers in full bloom. The entire forest was in a riot of purple including the paths which were adorned with fallen flowers. It was a moment where astonishment would be an understatement to say the least.

For any regular trekker from Mumbai, it is common knowledge that the monsoons convert the Sahyadri into a carpet of green adorned with tiny monsoon flowers, but this beauty blooms in every seven years and is a rare treat and that made it even more special. There were thousands and thousands of them, smiling from the bushes, spreading a gentle fragrance in the air with fallen petals adorning the path.

The birds were singing at their chirpiest best and the sound of the waterfall and streams around, all made it a perfect treat to all the senses. In no time we all became like tiny kids gleefully enjoying the fairyland we were transported into with many of us shaking the bushes to have a shower of flowers falling below.

It is rightly said that nature never betrays the heart that loves it and this time it was unveiling itself in its full glory for tired city souls like us. As we reached higher, the Karvy flowers gave way to tiny monsoon flowers in yellow, pink and purple.

We climbed a couple of ladders enroute which added a bit of the adventure factor to the trek and reached the Ganesh darwaja.

We halted in a cave nearby and had our breakfast. The cave was big enough to accommodate 30-40 people and is generally used for camping overnight. Sipping on hot ginger tea watching the peaks around, I couldn’t imagine of a better sunday morning feast.

After finishing the breakfast we entered the fort area. The fort has four gates, the Ganesh, Hanuman, Konkan and Trimbak darwaja. The entire area was covered with yellow flowers and tall grass bushes.

We walked in between the bushes and reached the Nedhe (hole in the rock), which means the eye of the needle, so named due to its shape. Strong winds lash through the Nedhe and it makes a beautiful viewpoint especially in the monsoon when the clouds burst through the hole. From here after some further walk we reached the highest point which gives a 360 degree view of the surrounding ranges such as Alang Malang Kulang, Kalsubai, Harischandragad, the Sandhan valley etc.

After enjoying the views around, we made our way towards the Trimbak darwaja and finally made our way back to the base village. It was a sunny day with the monsoons having receded. Few portions of the trek goes through deep forests which provided a natural shade. When we reached the plateau from where we had seen the sunrise, there was scorching heat with the sun now being overhead. As we neared the base village we came across the river and soon most of us jumped into it to have a refreshing dip.

After spending some time at the river, we made a move towards the base village where scrumptious village food was awaiting us. The village also houses the famous Amruteshwar temple which one can visit enroute. However most of us were tired and hungry and we headed to have lunch and the much needed rest for our aching soles. We had our lunch fresh and tasty home cooked village styled Bhakri, Soyabean sukha, dal and rice. After freshening up and some rest we then proceeded back to our somewhat bumpy and off course the stuffy ride towards Kasara.

As the jeep drove past the highway, it was a time for some chit chatting and sharing travel stories. The team by now was very well bonded post the beautiful trek and off course the after affects in form of aches and pains which was shared by one and all. Looking out of the window rewinding on this wonderful trek, I wondered how delight was at every other corner throughout this trip giving us much beyond what we had expected. A month back I had travelled all the way to Uttarakhand to visit the famous valley of flowers with much planning and reserving a week’s time, whereas this spontaneous trip over a weekend just at the outskirts of city didn’t leave any stone unturned to leave me mesmerized. I guess beauty is all around; sometimes it is at our backyards too, we just need, tread the off beaten path, get out of our comfort zones and explore a bit. Believe me the reward would be much more than expected as experienced by each one of us in the group.