When I first landed in Bangalore, I must say, the city did put me off. Coming from Mumbai – a concrete jungle, bustling with life, I could not stop missing home and cribbing about where I had landed. All of this changed when I got acquainted with Sumit who I met through another friend. He was going for a trek the next day! He was crazier than I; and I couldn’t resist but ask him if I could tag along. Luckily he was kind enough to let me do so! Yes, I was finally out for my first trek after coming to Bangalore- Antaragange it is!

A friend of Sumit picked me up from Kormanagla and that’s where the journey began- a road trip!!! Being an adrenaline junkie, bike rides always give me a different kind of rush! We were joined by other riders at Byappanahalli, to become a group of 7 people, all unknown to me! So here I was hanging around with a bunch of strangers in a completely new city!

A little about Antaragange- It’s about 60 kms from Bangalore and approximately takes around one and half to two hours to get there. Unless, you take a detour, like us, which will then take another hour! But let me tell you, it was worth every minute!

The highways of Bangalore are smooth and clear unlike Mumbai which one of the thing I love and appreciate about Bangalore. Despite being a pillion, I wore a helmet all along- how I hated it! But I had strict instructions from my rider Srini; NOT TO REMOVE my helmet or else he would just leave me and go. Hahah!! Srini was a good one- made me talk through the journey- which can be quite a task, for some!

We were all together, making sure none of the riders were left behind. I think that’s what I like about road trips- the amazing amount of trust that binds even unknown people together! And if you are a Pillion, you should have complete trust in the rider- and that I did, completely! He was amazingly good at it- amazing control on the bike even when we hit 110- this guy knew his shit! The roads were pitch dark only to be illuminated by the starlit sky and the ‘moonshine’. Not every day do we get to see such a heavenly view! I was awestruck by the beauty Bangalore had shown me. We went from all the possible lanes that could take us to our destination.

I saw the beauty that night had to offer me- the road seemed serene, with big rocks under the twinkling sky and the cool breeze brushing my face. OMG! Something that I desperately needed- a break from the mundane! We reached the base camp and parked the bikes. Here, a small mosque gave us the certainty that the bikes are going to be pretty safe.

These chaps were all geared up with torches for us to find our way in the dark. We trekked up the hill and found a place to stay for the night. All I did was just sit and gaze at the sky while these guys were preparing for a bonfire and barbeque. They, very sweetly, got me some veg noodles to hog on- good people indeed!! Oh! But how do I eat them?!- Hands bro, hands! No fork scene! What fun it was to lie under the stars and moon on a huge rock, lying down and eating noodles. The moon was at its fantabulous (if there’s a word like that) best in an uncanny yet beautifully gorgeous blood red colour!

We started collecting small twigs, broken branches and dried leaves to light up our bonfire. The place was full of thorny shrubs and one needed to be quite careful. Some set up the bonfire, others did the barbeque and put up the tent. While, all I had to do was keep finding some more small twigs to keep the fire burning! 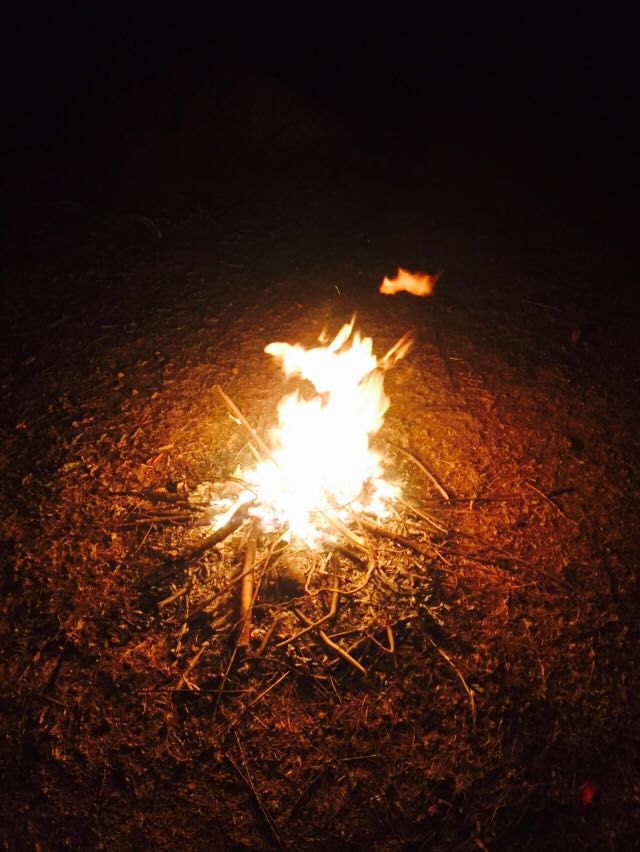 There was a big rock- that soooo reminded me of the Lion king- Pride Rock!! Yes, that! We were all chilling under it, gazing at the moon and listening to a few epic failed ghost stories by Shushant and Srini.

It gets pretty cool in the night and if you are not the one who can bear the cold wind, carry your jackets or pull overs. I couldn’t bear the cold after a point and went inside the tent to sleep but ended up looking at the dazzling sky from the mesh of the tent.

Finally, I managed to sleep in the morning at around 4- 4:30 a.m. Mr. Sumit Xavier interrupted my sleep at 7 AM. Who does that? Wake up someone and then go back to sleep himself! Well but I’m glad he did that- I went for a small trek jumping the rocks and sitting looking at the sky where the sun and the moon looked at me from above. It was still a bit chilly, but it didn’t bother me much. Then I came back and lied down on a big rock listening to my favourite melodies, enjoying my own company. I think that is what matters the most, when we start enjoying and start being comfortable with our own company, the entire perspective of life and our frame changes. Later, I heard Sumit calling me, well not by my name, he has some short term memory loss issue. Well old age has some baggage after all. Sumit, Shushant and I went on the other side for a small trek. It was scorching hot but we had to go up there. Sumit looked pretty experienced and skilled when it came to treks. He climbed the rock with absolute ease and swiftness. I just went from one rock to another and at one point I was shit scared to even climb it. But I did manage to overcome my fear- well some credits to you, Sumit uncle, for giving me a hand at the peak! I felt like I have done a kalsubai summit. Hahha! Exaggeration, I know! But felt really good. After all, it’s all about the little joys in life- and well, this was a big one for me!

Taking a selfie with the tent was mandatory, I guess! After the selfie session and wrapping up our camp; we found our way to the bikes. While on our way there was a small cemetery which would have freaked us out in the night had we known before; well at least me!!

Well it was a pretty cool place to chill with friends (or even strangers, like in my case).

I definitely recommend this place to the fellow travellers in Bangalore. Go! Go for it! It will definitely be a memorable one!! 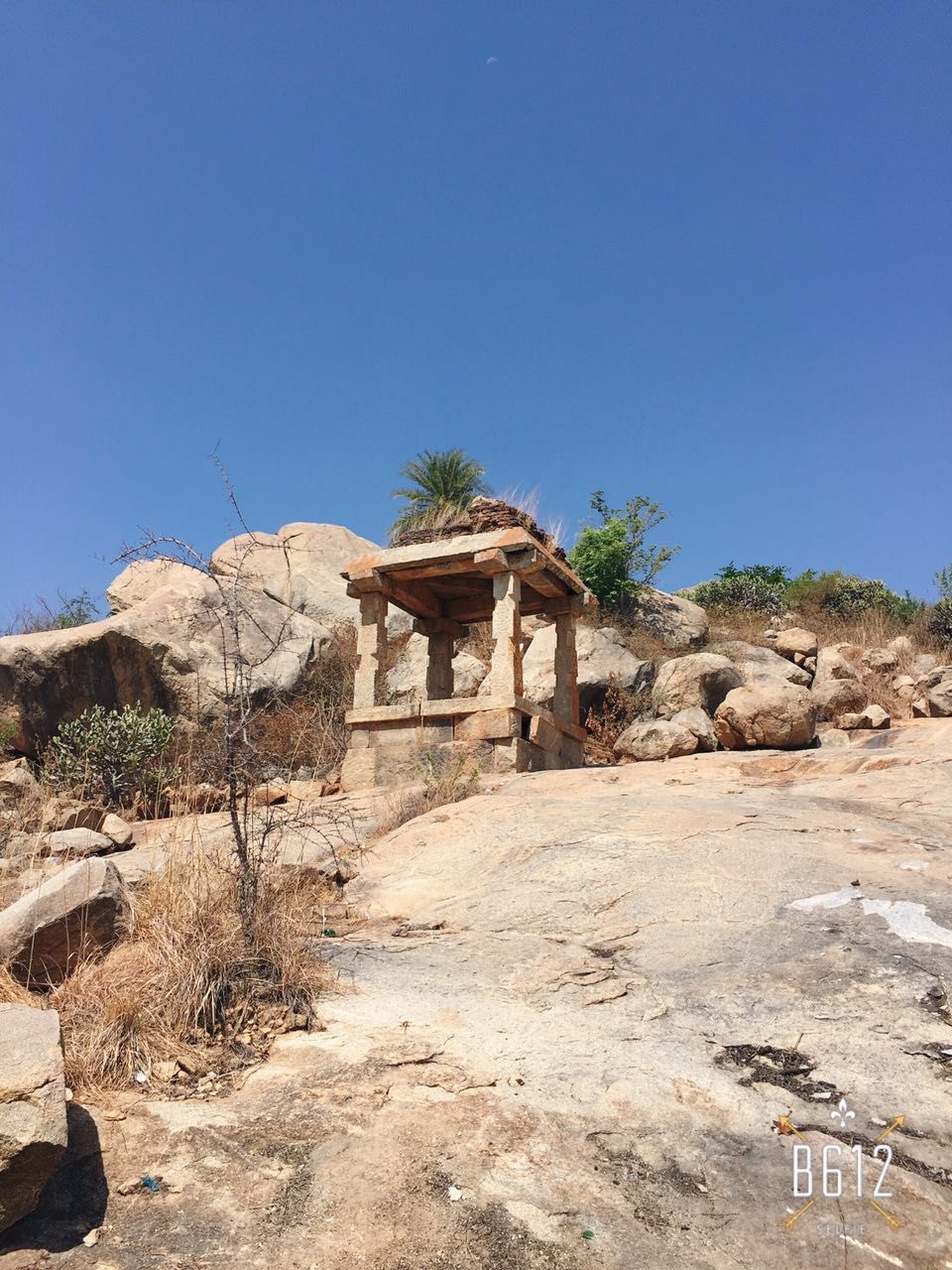 This blog was originally published on 'Living to the fullest'