Far less traveled than its neighbors, South Africa and Botswana, who have gained fame as premiere safari destinations, Namibia remains to be a land unseen by many visitors to the African continent.

Although Southwest Africa shook its colonial shackles in 1990, now Namibia still exhibits an interesting blend of German colonial and African cultures. Windhoek, the cosmopolitan capital city is, not surprisingly, known for its great beer!

Those who know Namibia know it for its dunes, some of the largest in the world. These epic sea-side slopes have been formed over millennia by red sand washing up onto the shore, and then crafted by strong winds coming off of the Atlantic Ocean. Dune 7, the tallest dune in Namibia rises up 383-meters.

However, the home of “endless horizons” is so much more than big dunes and good beer. Northern Namibia is the home of Etosha National Park and the verdant eastern sliver of land known as the Caprivi Strip.

415-kilometers north of Windhoek and encompassing more than 20,000 square kilometers of open land, Etosha National Park is truly vast. The park’s dry terrain changes from desert to semi-desert to open savannas and is home to a variety of unique wildlife species. 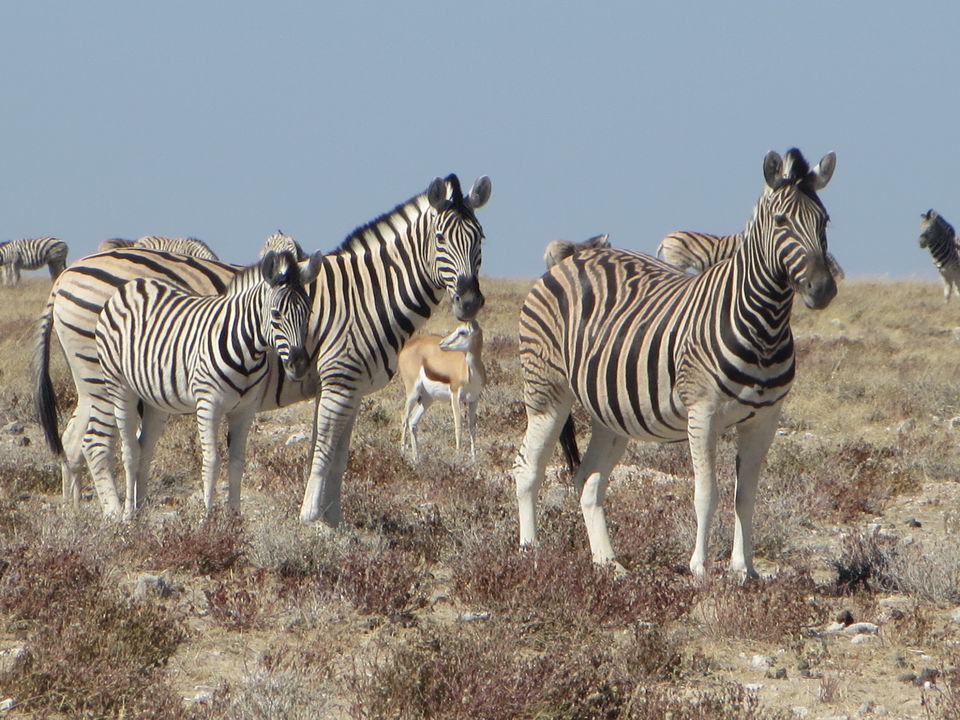 The Caprivi Strip is a thin, verdant sliver of land 450-kilometers long and mostly 32-kilometers wide jutting off of Namibia’s eastern border, flanked on either side by Botswana and Angola.

This relatively unknown destination is somewhat of a gem to seasoned and rookie Africa-travelers alike! Not only is it exquisitely beautiful, but large game is often visible from the road as you drive the length of the strip making for a rare happenstance game viewing opportunity. Caprivi sits squarely in the migration route of elephant between Angola and northern Botswana; large herds can be found here.

Setting up camp along the river at Ngepi Camp 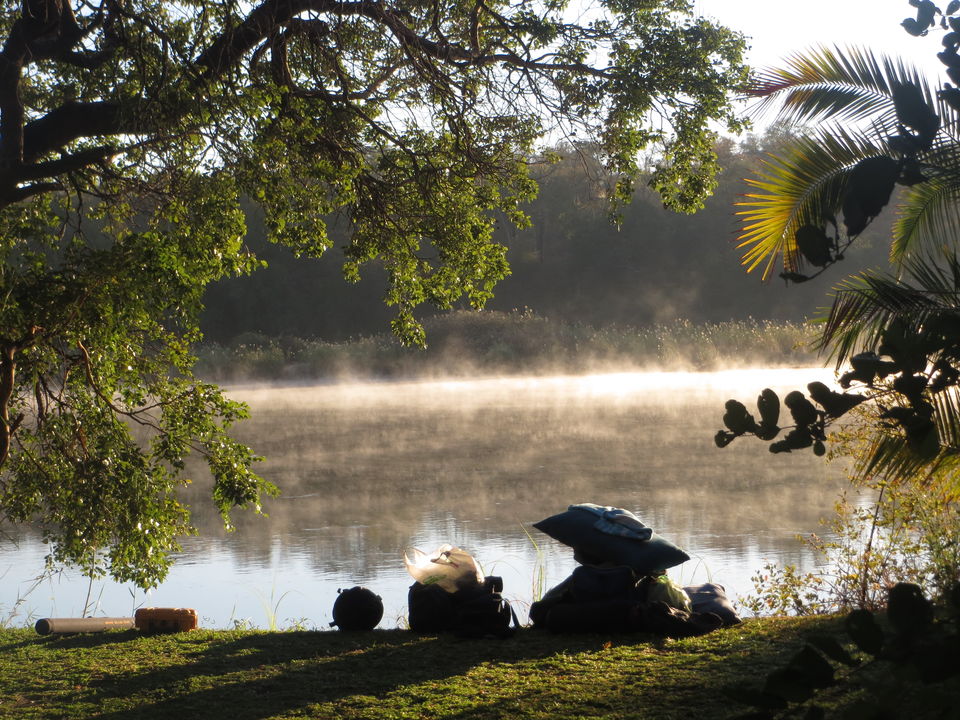 There are few places better place to stay in Caprivi than Ngepi Camp.

This 100% eco-friendly campsite has gained international attention for its strong liberal sensibilities as well as it’s gorgeous features. Lush, grassy campsites share open air, boma-style restrooms and natural showers where the water trickles down from the tree canopies above you. Guests can swim in the Okavango river (in protected areas from the many hippos!) and enjoy stunning views of the open water from camp.

A festive, African-themed al fresco bar area often gets rowdy in the evenings as travelers from all over the world congregate to share stories of how they ended up in this small paradise.

Although Namibia’s northern safari circuit is perhaps lesser traveled than some more widely regarded game viewing destinations, it is certainly a trip worth taking! A different flavor and an undiscovered feel give Etosha National Park and the Caprivi strip an authentic atmosphere.

If Namibia isn’t enough for you, the world-renowned Victoria Falls and Okavango Delta are only a short trip away! 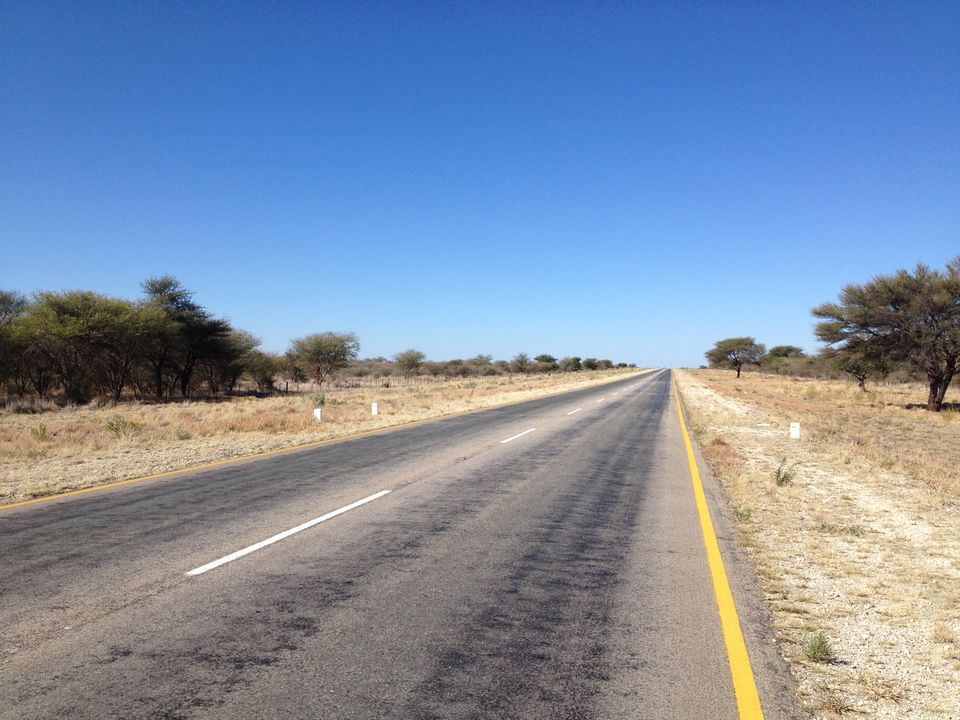 Elephants and giraffe can be seen hiding in the sparse forests and plains game like zebra, springbok, and the desert loving gemsbok (oryx) are common. Lions, leopard and hyena are also in the park. One of Etosha’s highlights are its few watering holes. Wildlife, predators and prey alike, congregate around these few and far between water sources in force, making for an unbeatable wildlife viewing and photographic opportunity.

However, Etosha National Park’s most spectacular feature may not be the prolific wildlife at all! The Etosha Pan is an enormous salt flat covering approximately 4,800 square kilometers. This incredible expanse of sand is almost perfectly flat, allowing for otherworldly panoramic views from horizon line to horizon line. Some areas of the pan flood slightly during the wet season creating a mirage effect on the water!

Sitting on the Etosha Pan! 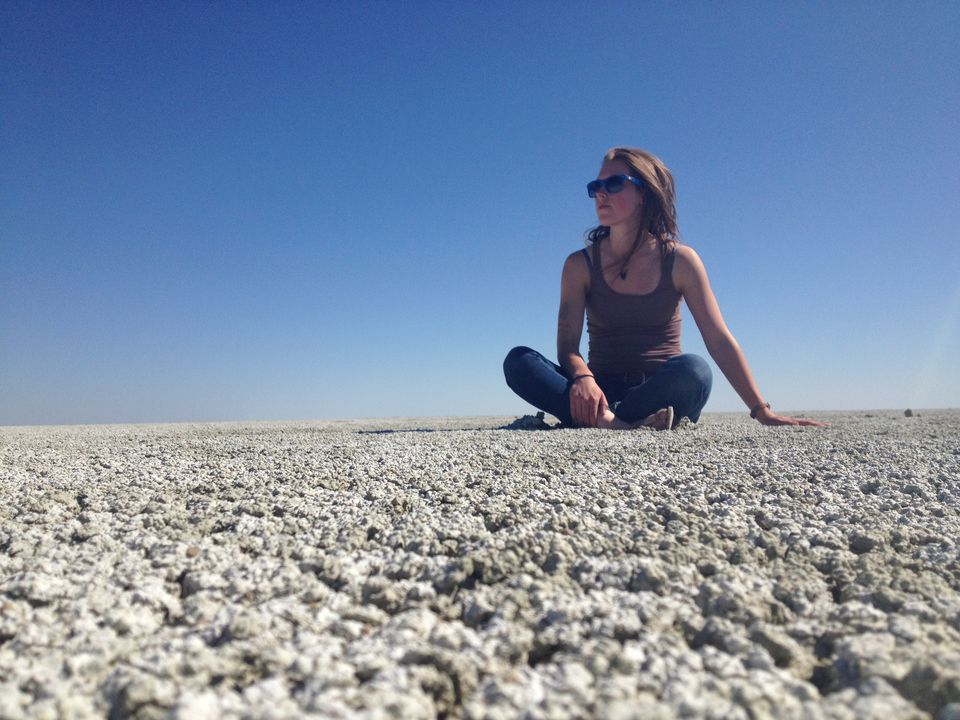 Ethosa National Park has numerous accommodation sites within its borders. Staying in the park is preferable given the vast driving distances between park gates. By staying inside the park you can get a jump start on the days game viewing!

It is worth noting that you must retreat to your lodge for the evening, or exit the park by sunset as driving in the park at night is forbidden. Guests are also not allowed to exit their vehicles while in the park due to the large number of dangerous species here (you will be promptly kicked out of the park if you do!).

Keen to read up on expert travel content from destination experts around the world? Check out more at Stamp Travel.