Amazing animals, spellbinding sunsets and luxury lodges: a safari holiday in Botswana is a wildly exciting experience. While African countries such as Kenya and Zimbabwe have been making headlines for their political instability as much as their beauty recently, peaceful Botswana has been building a successful tourism trade below the radar. It’s long been known by safari enthusiasts for its incredible game, but it wasn’t until the release of Alexander McCall Smith’s international bestselling series, The No 1 Ladies’ Detective Agency, which is all set in Botswana, that it started making the top of tourists' must-visit lists. It’s little wonder that people from adventurers to honeymooners are starting to gravitate to this incredibly beautiful country, which is the size of France but inhabited by less than two million people, and offers such delights as snaking rivers, vast plains with plentiful game and tiny villages to explore. I recommend staying at three incredible camps to make the most of your Botswana experience…

Flying in a tiny aeroplane to this cool camp in Chobe National Park is a wonderful experience. The view from the window as you zoom over hundreds of miles of unspoilt savannah, herds of wild elephants and sparkling wetlands whets your appetite for what’s to come. Chobe is the second largest park in the country and has one of the greatest concentrations of game found in Africa, so you’re guaranteed to see some amazing wildlife, in particular elephants, for which the park is famous. When you touch down on the grass airstrip at Savute (around an hour’s flight from Maun Airport, which acts as a gateway into the heartland of Botswana), it feels seriously remote. Surrounded by thousands of miles of bush, its idyllic setting overlooking the now dry bed of the Savute channel offers an excellent game-viewing vista, with a watering hole where animals come to drink right by the main lodge. The camp’s brochure says ‘tented accommodation’ but forget flimsy canvas - rooms here are incredibly luxurious, with thatch roof, four-poster bed, private viewing deck with a hammock big enough to lounge in together, and a big bathroom with two basins and separate shower. Game drives start at 5.30am, but for those who find it hard to wake in the morning, a much-needed tray of biscuits and flask of hot coffee is brought to your room, and a delicious buffet is laid out in the main lodge for breakfast. If you still don’t feel entirely awake, bumping along the sandy tracks in a 4x 4 Land Cruiser, with intoxicatingly fresh breezes blowing in your hair, will ensure you’re soon wide awake. There are two drives a day, each lasting for around three hours, and this speeds by, as the bush is incredibly exciting. Every time the guide brakes and points out some leopard pawprints or shows where grasses have been trampled by lions is a thrill, particularly as there are prides of up to 40 lions in Savute. The evening drive has the added bonus of stopping in a picturesque place for drinks at suns 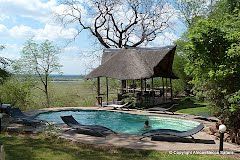 The short 20-minute air transfer from Savute to Moremi Reserve is in another tiny plane and the ride is as exciting as a safari; one of you can even sit next to the pilot and have a go at taking the controls if they’re in a good mood! Moremi’s most luxurious spot is Khwai River Lodge, one of Botswana’s oldest lodges and still the chicest. You’ll feel instantly at home, as the accommodation is designed in a similarly romantic way to Savute: tented bedrooms with breathtaking savannah views, four-posters and polished wood desks. Couples should book the Real End Palm, which lies on the outside edge of the camp and has a plunge pool and outside copper tub for two, plus the benefits of candlelit dining on the outdoor deck, your own 4x4 vehicle and personal guide, and an in-room massage. The rest of the camp is charmingly memorable. The tents are named after trees and there’s a wooden bar and a camp fire that's great to sit around at night clutching an Amarula (a creamy liqueur made from the amarula nut, which grows throughout Africa). There's also the Naturally Wild spa and gym, though I’d recommend having a massage on your private deck. The surrounding scenery, which is very lush and green, is markedly different to Savute. Moremi has vast river floodplains, attracting a huge array of birds, and there are also hippos and crocodiles in abundance. Elephant, buffalo, cheetah, lion and leopard are also kings here, but herds of zebra, impala and wildebeest are magnificent too and much easier to spot, sometimes from your room! Arriving at the camp after the second drive of the day, well after the sun has set and the big cats begin to prowl, drinks at the bar are a welcome sight, followed by a huge dinner. The food here, as at Savute, is magnificent. Everything’s included, from your mouth-wateringly good breakfast to afternoon tea and cake and delicious three-course dinner. Each night, staff suddenly appear and announce the menu, which includes such exotic delicacies 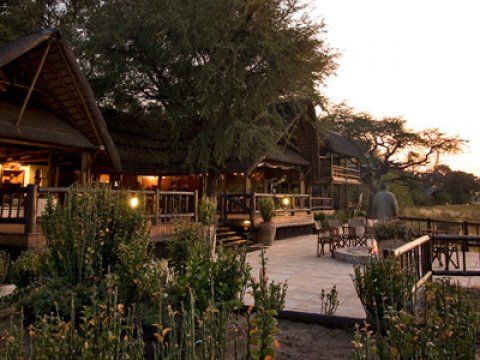 No trip to Botswana would be complete without a trip to the Okavango Delta, one of the world’s largest inland water systems, which stretches 16,000 miles in the middle of the Kalahari Desert. It’s like being in a David Attenborough programme as you soar above rivers, lagoons and floodplains before eventually touching down on the miniscule airfield at Eagle Island Camp, 20 minutes from Khwai. As you’d expect, being in the middle of a delta, it’s all about water-based activities here. Cruise down waterways in a motorised boat for drinks at sunset, marvelling at the lilies, hippos and seemingly endless sky. Or, if you want something more adventurous, have a go in a mokoro (dug-out canoe), which is available to guests from April to October. Eagle Island Camp also offers guests one of Botswana’s most exciting adventures: a helicopter safari. Whizzing along rivers, hovering above herds of elephants and swooping in to take a close look at some giraffes, all while strapped in to a doorless chopper, is absolutely fantastic and not to be missed. As well as the beautiful four-poster beds and scenic swimming pool to lounge around, the other allure here is the Fish Eagle Bar, voted one of the most romantic bars in the world by the New York Times, thanks to its vista overlooking tranquil waterways. It’s a choice spot for a sundowner cocktail and to toast the end of your amazing safari 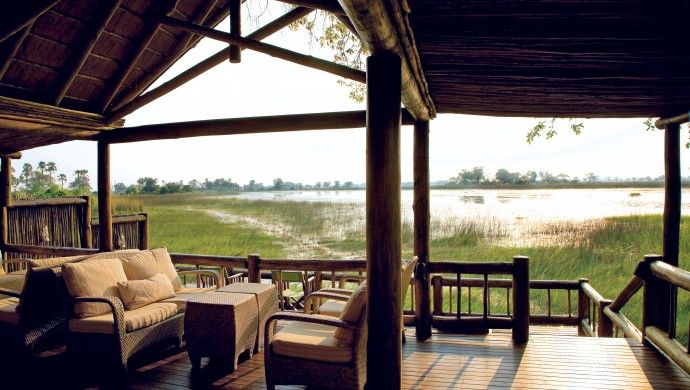