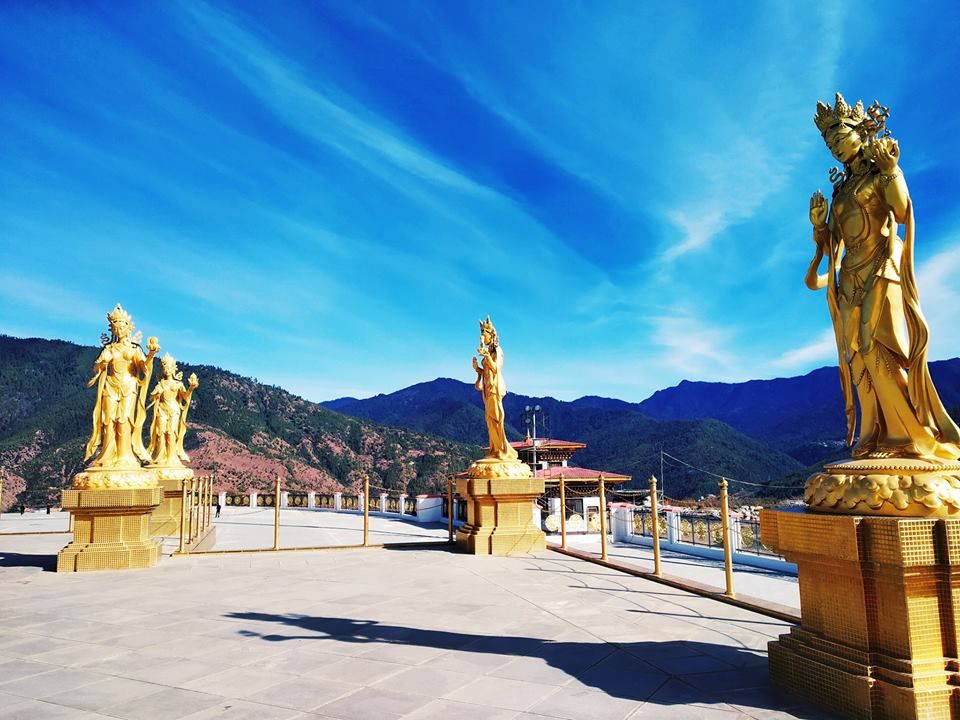 Bhutan happened to me out of the blue! Having been vacay-deprived for a long time, I was hungry for a moderately long vacation to some exotic place I had never been before, preferably on the other side of the Indian border. Eventually, I was to make a choice between Sri Lanka and Bhutan. While Sri Lanka is still on my wish-list, Bhutan was worth the time, energy, and money spent. The following is a glimpse of my little rendezvous with "The Last Shangri-La," the little mountain kingdom of Bhutan.

I joined a group of travellers from Kolkata, my hometown, as it is quite easy to travel from Kolkata to Thimphu (via the border towns of Jaigaon and Phuntsholing). We boarded a train from Kolkata to Hasimara and then took a bus to Jaigaon, the last stop in India before one enters Bhutan by road from Bengal.

While Jaigaon was quite hot, the weather in Bhutan (a few miles on the other side of the border) was relatively cooler. The dip in the temperature could be felt once we reached Thimphu, the capital of Bhutan.

Day 1: Thimphu, in All Its Grandeur

As one crosses the immigration posts (there are multiple, apart from the major one near the Bhutan Gate at the border), one can experience the visible difference between the two countries. The noise and the pollution ends at the border, and the fresh mountain air of Bhutan, coupled with the spotless roads, amazes one.

Our first day in Thimphu was an eventful one. We started with a visit to the local art school, the National Institute for Zorig Chusum. While in countries such as ours, we find students clamouring for engineering and management institutes, in Bhutan, no such rush exists. They seem to live life at their own pace. It was enlightening to see a huge number of Bhutanese youngsters drawing or sculpting at this institute. Travellers can click photos inside the institute, interact with the students, and buy their creations at the institute's curio shop.

Our next stop was Bhutan's National Library, which seemed like an architectural marvel. While the library hosts several rare Bhutanese books, one of them stands out amidst the rest. The book in question is supposed to be the Guinness-record-holder for the largest book in the world. It is a montage of Bhutan's culture and heritage, with gorgeous photos of Bhutan's serene landscape. The library premises offer great photo-ops.

Our next destination was the Drupthob Thangtong Dewachen Nunnery. This is an ancient nunnery nestled amidst towering mountains and a place where one is sure to find a lot of canine companions, as they are scattered all over the site.

A short distance away is the Changangkha Lakhang, a sacred place where the Bhutanese bring their newborns to be christened and blessed.

The next spot, Buddha Dordenma, or the Big Buddha, was one of my favourite places in Bhutan. As one enters this hallowed place, one finds a towering golden statue of Lord Buddha, surrounded by statues of angels, overlooking a lush green mountain. The place offers gorgeous views and is a photographer's delight.

Our last destination for the day was The Memorial Chorten, one of the many "stupas" of Bhutan. We did not enter the Chorten and sped to the local market instead, as it was already dusk by then.

The local markets did not disappoint, though the prices were too steep. We headed to the hotel after buying some souvenirs and enjoying some local delicacies such as Kewa Datshi (a concoction of boiled potatoes, chillies, and cheese, which reminded me of veg stroganoff and other Continental delicacies).

Our second day in Bhutan began with a visit to the beautiful Dochula Pass. With stunning views of snow-capped Himalayan peaks, Dochula is also home to 108 "stupas" built by the Bhutanese queen in memory of the soldiers who lost their lives battling Assamese militants in 2003.

This place is straight out of a fairy tale, as one finds towering trees enveloping the entire area. There is a cafe with a gorgeous view of the surrounding mountains and a canine family that loves to play with tourists.

After spending an awesome morning at Dochula, we headed for the legendary Punakha Dzong. This is the second-largest "dzong" (or fortress) in Bhutan. If Dochula was a fairy tale, Punakha certainly was a heavenly deal! The way to Punakha itself offers views of the stunning landscape, with the greenish-blue Mo Chu (Mo river, as "chu" means "river" in Dzongkha) meandering by.

Unfortunately, we had reached at the last moment, with about 20 minutes to spare. The dzong maintains official hours and closes for lunch at 1 pm. We took a quick round of the prayer area (with the statues of Rinpoche and his various avatars) and the gorgeously built administrative buildings.

The dampener of the day was a power cut in our hotel that evening. It was also my birthday, and I was happy that I had spent the entire day away from the humdrum of city life and fake camaraderie.

However, the power cut spoilt my mood. Though the power was back after an hour or so, we had almost frozen to bits without the heater or the geyser for an hour.

The next day began with a visit to the beautiful Paro river. With jaw-dropping views and clear, greenish-blue waters, the river offers stunning backdrops for photos. The white pebbles dotting the banks add to the river's beauty. I had my first ziplining experience at this river, and it was an awesome experience.

While the Tiger's Nest in Paro is THE most sought-after destination in Bhutan, we did not have it listed in our short, time-bound itinerary. All we could manage was a view from a distance (not fit for a decent photo). We weren't carrying proper hiking gear either and were told the steep hike to the top of the monastery would take around 3 hours, with another 2 hours for the trek back. We were given an option to carry out the trek at our own risk, but none from the group opted for it, as it was not a part of the itinerary. I have vowed to cover the hike someday though!

We also visited the Drugyel Dzong, the ruins of a centuries-old dzong, with beautiful views of the surrounding valley.

Day 4 began with a bird's eye-view of the stunning Paro Airport. Flanked by a river on one side and a mountain range on the other, this airport is considered to be one of the most dangerous airports in the world, with only a handful of pilots equipped with the skills to take off and land here.

We then headed to the Che Le La Pass, the highest motorable road in Bhutan, situated at a height of 3988 m. The pass offers gorgeous views of the lush green Haa Valley, bordering Tibet and China. One also gets an awesome view of the snow-clad Jomolhari peak from this place.

We made our way through snow-clad roads back to Paro. That evening, we shopped more at the local shops in Paro. While things were relatively cheaper there than in Thimphu, the chilling temperatures did not let us shop for too long.

Our trip ended on the fifth day. It was a misty morning, and we bid goodbye to this awesome country. As we headed back to Jaigaon and then to Hasimara through roads flanked by acres of lush green tea gardens, we were a happy bunch, enriched by the experience of visiting the world's only carbon-negative country.

While, my journey to Bhutan was my first step outside India, it was also a journey marked by a number of new experiences. I have shared a few of them below:

Bhutan is the world's first and only carbon-negative country, which means, they produce more oxygen than carbon dioxide.

It is mandatory for the country to have more than 60% of its land to be covered by trees at any given point in time.

Remaining true to its carbon-negative status, the country has banned smoking (tobacco of any sort). One cannot throw garbage on the streets or urinate in public without paying a hefty fine.

Bhutan has also banned fishing and mountaineering. It is illegal to "conquer" a mountain in Bhutan, as all mountains are considered sacred.

The Bhutanese currency is of the same value as the Indian currency.

People from India, Maldives, and Bangladesh can travel to Bhutan visa-free. Indians do not even require a passport to visit Bhutan, owing to great trade relations between the two countries.

Bhutan's markets have an awesome collection of the phallus symbol. I found the markets of Paro full of curio shops selling various forms of the phallus (big, fat, colourful) symbol, which one sales lady told me signifies good luck in Bhutan.

Bhutan's roads do not have any traffic at all. The main crossing in Thimphu has just one policeman and no traffic lights. There is a heavy fine to be paid if a pedestrian does not use the zebra crossing.

Bhutan's streets and buildings are adorned with huge photos and posters of the royal family. The royal family of Bhutan is loved and revered by the local population, although Bhutan is currently a democracy.

Bhutan's buildings, be they shops, administrative buildings, or homes, are beautifully crafted, with unique Bhutanese architecture and paintings adorning most of them. One of the most popular motifs painted on such buildings is that of the legend of the four friends, depicting an elephant, a monkey, a hare, and a bird sitting beneath a tree. The legend depicts the spirit of friendship and coordination.

Bhutan's people are mostly dressed in their national attire: the "gho" for men and the "kira" for ladies. The local population also dresses modestly (I was asked to do so, too, and wasn't particularly pleased, before I realized it was Bhutan I was in, and not India). ???? Bhutan measures its growth not by GDP (Gross Domestic Product), but by GNH (Gross National Happiness). It is said, they value growth only if it does not harm the environment in any manner. Any business stationed in Bhutan has to certify that it would not harm the environment in any manner. Although Thimphu is the national capital of the country, Paro provides better internet connectivity and is home to Bhutan's only international airport.

Thus, Bhutan was definitely an apt start to my overseas ventures. I would not really use the term "foreign" to describe my trip, as Bhutan is just a mirror image of India, though much cleaner and much more disciplined.