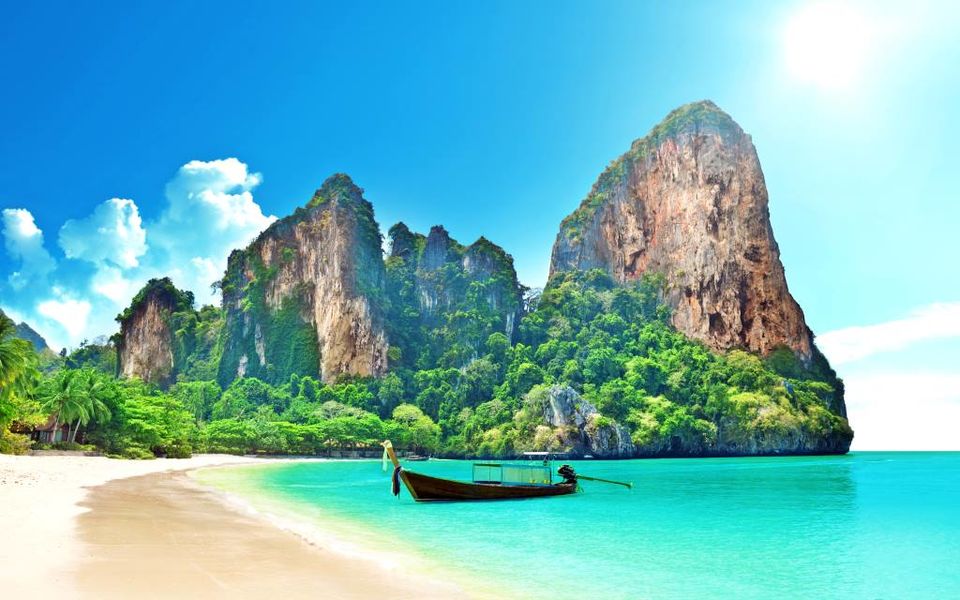 ... The bus drove into the center of night Bangkok and immediately got stuck in a traffic jam. By an extraordinary coincidence (fate ?!) in the headphones of my PDA sounded an old thing Murray Head "One night in Bangkok"

The long-known song under the just experienced impressions of a trip to the river Kwai, superimposed on the beauty of the multimillion-dollar night metropolis, only heightened the feeling of some kind of unreality. I must say that this two-day excursion was one of the most unforgettable and, as the guides said, one of the most sought-after by Russian tourists, despite the rather high cost (plus minus 4000 Baht). The hotel on the Kwai River itself (by the way, it is pronounced like [kue:] instead of [kwai], as most tourists say, [quay] on the local means one of the swear words), swimming in its fast waters and under the waterfall, breakfast on the raft during the movement, elephant riding, rafting, bathing in thermal springs, cor-intergrowth of monkeys in the forest and many more must be experienced yourself. As they say, it's better to see once ...

See another Thailand, its nature and customs, and not the dirty beaches of Pattaya, not everyone's famous Walking Street of this vicious city. Although this is also attracting crowds of tourists from all over the world, and it is also a part of modern Thailand.

Bangkok. Catastrophically it was not enough one night and half of the next day to get acquainted with this original city. So I want to say the words of the famous movie heroine "Bangkok - a city of contrasts!" It dazzles with dazzling glittering gold temples, tall skyscrapers and, alas, poor neighborhoods of commoners.

During the allotted time, I managed to visit the temple of the reclining Buddha (incredible beauty!), Swim through the canals and rivers of the city, and go to the jewelry factory.

In the evening before I visited the BAYIOKE skyscraper, where you can admire the night Bangkok from a height of more than 300 meters and have dinner there in the restaurant (buffet). A little trick - after 20.00 the ticket gets cheaper almost twice and costs about 470 Baht.

In Pattaya I was allowed to settle in the hotel "Camelot", where the film "Thai voyage of Stepanich" was recently filmed. Zakazuha, of course, clean water; but nevertheless, in a comfortable sightseeing bus during the many-hour crossing, he allowed to brighten up the long road. Go tell: the hotel I liked. The new building generally looks pretty pathetic for its 3 stars. The old 7-storey is much simpler. But nevertheless, all that is needed in the room was a sin to complain. Besides, I'm not spoiled by foreign service, because for the first time in my life I crossed the border of the homeland. Yes, and the situation at the hotel is advantageous: to the beach nearby, to Walking Street about 5 minutes, to the pier - 7 minutes. walk, all transport goes by transit (to Jomtien minutes 10 on tuk-tuk).

The first day I was tormented by some strange feeling of deja vu. Especially when I, trying to cut off the road to the beach, wandered on some sort of narrow street. And then came the insight: for sure! It's fucking similar to Sochi! In general, it was decided to sunbathe, swim away from Pattaya Beach. For example, in Jomtien. But even better on the islands. The easiest option is the island of Koh Larn. Every day at 10 am (the optimal time IMHO) from the pier in his direction departs 1-2 ships. On the road 40 minutes, costs only 20 Baht per person. It is possible and more speedboat, but already more expensive. There are several beaches on the island; most liked Samae Beach (if nothing with the letters did not mess up).

In Pattaya, we liked mini Siam. It is such a park, where world-famous architectural buildings in miniature are collected.

In the middle of my trip i visit some of the courses of SEO lessons about istagram, here i listen about instagram views, how to buy them and how they are how they affect your account. This is a good experience for me.

In the evening all this economy is colorfully highlighted and looks just great. In addition, you can make up your knowledge of history and geography by reading a short annotation for each exhibit.

Thai temples, the Leaning Tower of Pisa and the Eiffel Tower, the Statue of Liberty, the Cathedral of St. Basil the Blessed and many other things will quickly eat up on the flash drive of your digital friend. With a film camera, I'm afraid that only pros go there.

However, mini-Siam works only up to 22 hours, so hurry up. It is somewhere on Sukhumvit, got to him by taxi (from Second Road ride 10 minutes).

This place is about 20-30 kilometers from Pattaya. But I do not advise you to go there with an excursion, but on your own. Otherwise there will be an option "gallop across Europe". We spent almost all day for a walk in the park, and then not all went around. Excursions also carry