Pondicherry! - A must place for beautiful Beaches, Culture, Museum, Ashrams! 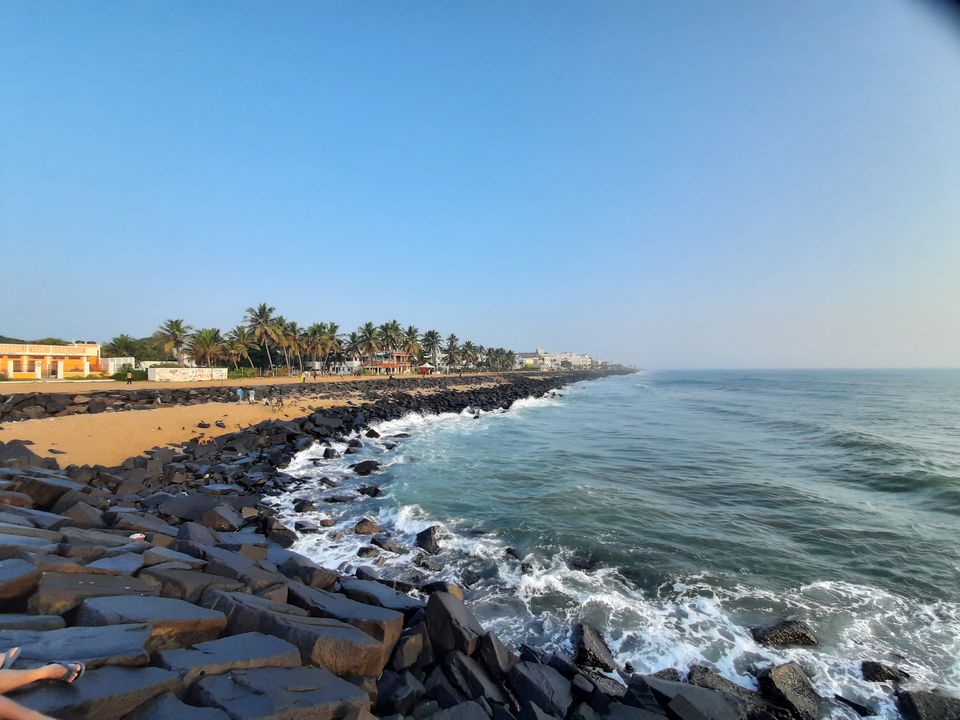 Though i'm from AP, i'm in chennai for the last 6 years but still i could not visit Pondicherry till day before yesterday though i previsously went upto Villipuram for work purpose.

So as usually with all other trips which gets cancelled so many times, this also got cancelled many times but this week end i could make it!

We started from Tiruvanmayur bus depot, ECR at 7.45am on saturday. I wanted to make this a 2 days trip as i don't want to rush through. The road was very good. U should be knowing about ECR road if u know about chennai.

So we got down in Auroville which is 7km from pondicherry bus stand and taken a bike on rent.

We walked through and explored it and saw the old banyan tree, got to know about the history, their moto, history life etc.

More than this we got to taste different food items which are made from raw materials which are produced entirely inside (As claimed by them). Organic! Ice creams & juices made from flowers, cakes, lunch.

On the way we also had Wood fire pizza which is famous in this area.

We headed to inside the pondicherry and went to Arabindo ashram first and then moved to the Famous Rock beach and spend our time upto sun set.

Good things about it is no vehicles are allowed on the main road unlike marina beach in chennai. I got a feel like i was in some foreign country because of maintenance of this main road, buildings next to the road. Less lighting was maintained which was also good. Near the beach Gandhi statue was there which was big in Aisa and a war memorial was also there. Next to Gandhi statue , police music band played music which was very good at 6.30pm.

After this we went to Bharathiyar park and to 30 year old Vinayagar temple. And then we headed to hotel in JN street and had the dinner in a local restaurant .

We planned not to miss Sun rise as i love to see the sun rises. At least in new places as daily i wont wake up to see it. We waited for sun rise and after some time did a little big jogging as the place was fully loaded with Joggers.

Then we went to a French church which is near by. Here prayers were also happening in French.

Then we headed back and had breakfast and went to the Paradise beach. The boat ride for this was also good. The water was very clear in this beach again unlike Chennai beaches. I would have been more happy if chennai beaches are this much clean. Tides were also white which was very good to see which made me to capture videos in slow motion and super slow motion.

After this we went to Botanical garden where we saw different trees and Fishes from all over America. Atleast aquarium was neatly maintained.

Then after having lunch we moved to Museum where i got few surprising things about History which was presented in a single sheet from 3000BC to 2000AD (Refer The world history chart, a chronology of world history acc to rh carling)

Different types of stones or chemicals that we studied before 10th class I got to see now. After this we explored the city to see the buildings which has great constructions style simply with ground floor and first floor and great color combinations. Simple light colors yet beautiful.

Then we moved to Serenity beach which I didn’t like much comparing with the other two beaches.

Finally we moved back to Chennai having seen the much postponed Pondicherry. I would love to stay near the Rock beach because of the atmosphere than staying in Chennai city. As u can see Pondicheryy much more beyond just Boozing.