“For my part, I travel not to go anywhere, but to go. I travel for travel’s sake. The great affair is to move.” – Robert Louis Stevenson

I had no plans for the weekend after I had visited Sinhagad fort. I was flexible to visit any place around Pune and luckily my friend Abhishek had agreed to accompany me. Great! Traveling is much fun when you have a partner in crime ;) I had a few places in mind and I discussed about them with Abhishek. He said it would be better if we check out those places once monsoon had arrived properly. That time it did rain, but it was infrequent. I had been to a few places around Pune in the near past. So, I thought why not explore something inside Pune?

I suggested we'd visit Pune's highest point - Parvati hill and while we're at it, why not visit a restaurant nearby which is on my list? I read it about online and one of my friends had already been to that place. According to him it was worth visiting. Well, when some thing's on your mind what else do you need apart from someone's word of mouth, some curiosity and a good company, eh? Oh, did I mention about the beautiful weather? It certainly wouldn't hurt :) One evening and two places crossed off the list. Not bad, right?

The thing is Abhishek doesn't live nearby my place. He used to, but recently he moved out to another place and interestingly, it was raining there and it wasn't raining where I live! We had decided to meet at a certain place. So, we weren't quite sure whether we'd be going or not. We kept calling each other at certain intervals to check rain conditions in our respective places. After a few of those calls, he said we'd go whether it rained or not. That's what I am talking about. That's the spirit, buddy! I feel lucky to have such friends :) As Sherlock Holmes would say "The game is on".

We met up at Swargate and after asking around we reached there in a couple of minutes. I had read that there are steps one need to climb to reach to the top. I was expecting it would take more than half an hour to reach there. Surprisingly, we reached sooner and there aren't a lot of steps. Phew! So, there we were at Pune's highest point and the view from there is really good. It certainly is worth visiting. Check it out yourself.

There we were at Pune’s highest point and the view from there is really good. It certainly is worth visiting. Check it out yourself. 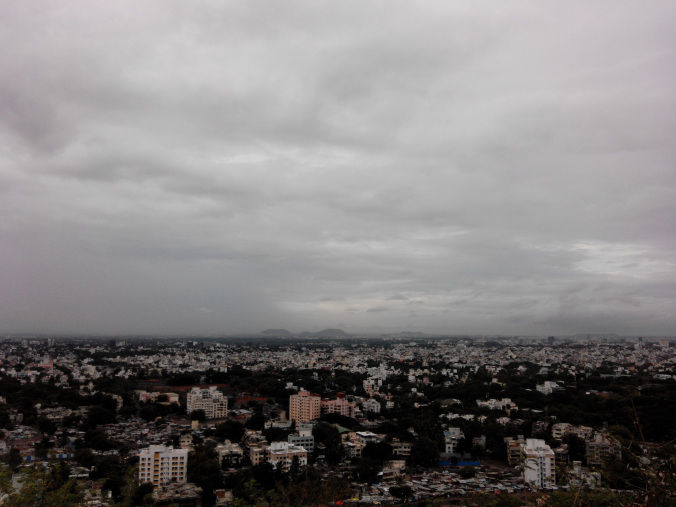