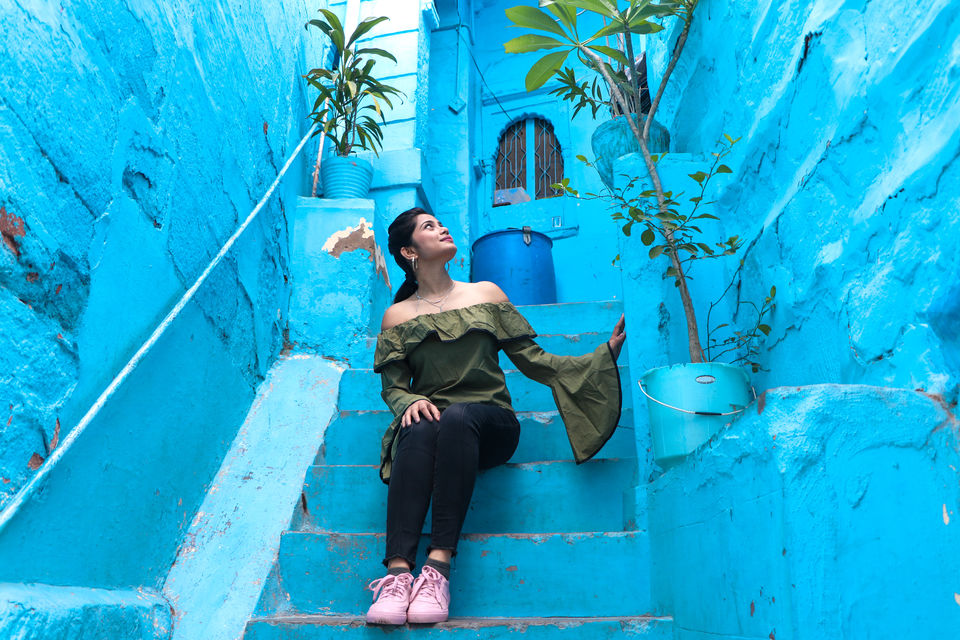 Jodhpur city in royal state of Rajasthan in India is popularly known as blue city. The obvious reason is the blue color of the majority of the houses which looks like the city is painted in blue. Well, we visited Jodhpur in November, 2019 and we decided to explore in detail. We booked our accommodation in boutique hotel named Rani Mahal which is a famous and one of the finest Vintage-Style Jodhpur Heritage Hotel. The location of Rani Mahal is in the old part of the city. It is actually an old Haveli which is renovated and finely decorated to build this Hotel. So, the idea of heritage walk came to our mind and our guide was arranged by the hotel itself.

We started early next morning with our guide Mr. bunty who showed us around and told us the detail story how Jodhpur became blue city. When the Mehrangarh Fort was built, all the Brahmins from various parts of Rajasthan were invited to join and help in various work in the fort. So, they were given colonies in the vicinity of the fort. They started building their houses, that is why those colonies are called 'Bhahmapuri'. Soon they realized it is very hot and sunny in Jodhpur. The white houses were uncomfortable in the eyes also and it made the temperature more uneasy. They discussed and looked for a solution to calm the temperature down. So, they started painting the houses blue. That is how Jodhpur became blue city. Even today, these blue houses are mostly seen in the old city area in the vicinity of the fort.

What to expect during a heritage walk

Tourists love to take those perfect Instagram worthy photographs in all those blue corners. The blue city has a striking similarity with some areas of North African country Morocco.

The daily life was getting started gradually in the morning time in old Jodhpur city. We walked through the narrow lanes which sometimes goes a bit uphill. The cycles and scooters were parked outside the main gates in some houses. The dogs were busy with their own activities. We had to move aside in the street to let the scooters pass as the lanes are really narrow at times. May be they did not plan for wide lanes during the Maharaja time or may be the lanes are purposely kept narrow to keep the thieves away.

Some houses or Havelis are converted to boutique hotels and resorts, but some are still residences for the Brahmin or Jain families who are staying for generations. We found huge cooler facing the outside area from the main gate in one or two Havelis. That is primarily because neighbors or members of the family like to sit in the outside area after a very hot day in Jodhpur.

There is a huge entrance gate of the fort from this back side also. There are two lakes, Ranisar and Padamsar towards the backside of the Fort which were artificial lakes built by the queens to save the rain water as reservoir. Ranisar has steps going down. There is a wheel in the top in backside of the fort to draw water from the Ranisar lake.

Overall, this is quite an unique experience in India. You can check the detail Heritage walk in our Jodhpur video in our YouTube channel 'Savvy Fernweh'.