It was raining from the night before the Kashmir earthquake. I could hear the rude rain on the sheets of the roof in my sleep. Good thing I was surrounded by the warm feeling of the small room and that I was lying on a fat mattress with a heavy blanket on me. Or maybe it was two.

I couldn’t figure out what time it was when I woke up in the morning, as the weather didn’t permit time-guessing. It was as dark as 6 in the evening on a normal day. The rain had been having it’s drill ever since. Hoping that I had hot water to bathe, I lazily dragged myself into the kitchen. As usual I was the last to wake up which is really embarrassing. I try my best to not to let it happen, but it always does. Sigh.

“Oh mokur koor (naughty girl) finally woke up! You know what time it is?” Papa exclaimed. He looked happy all of a sudden. I guess he was bored without his favorite TV show. My worry was of how my face looked like. I was sure I looked clumsy, wanting more sleep(obviously) . Before anyone could notice, I settled down myself near the TV on the carpet, next to Tasleem, who willingly handed me a cushion to rest my back. 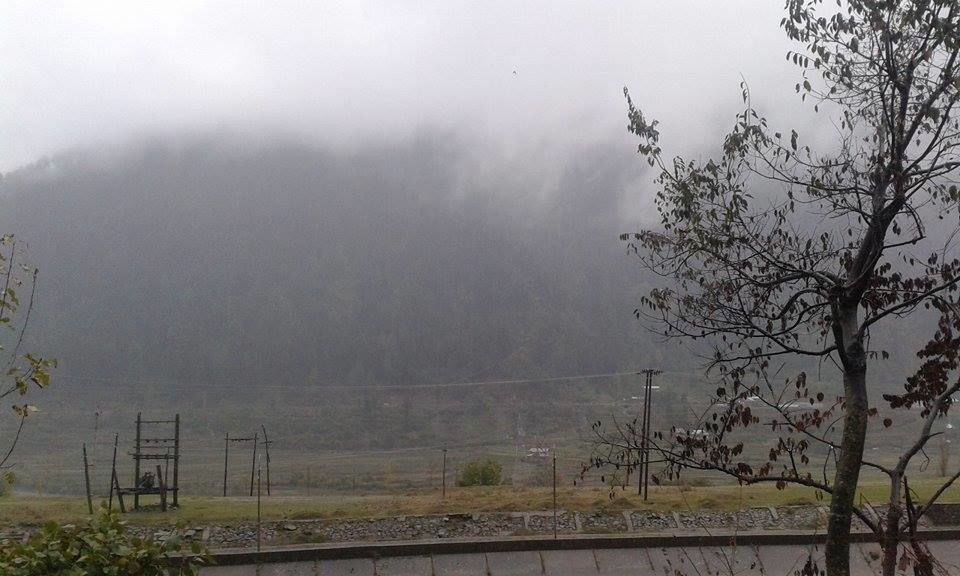 My own Kashmir family

The Khan family is almost like my own. My friend is actually the youngest brother out of the three in the family. But I rarely talk to him. He is a little moody. I have seen him all my life in Bangalore at college, so I spend more time with his family whenever I’m at Uri, since I don’t get to see them more often. I have visited them so many times that I don’t call anyone in Kashmir uncle or aunty. They are all Ammi’s and Papa’s for me. And sometimes I call them by their nicknames as well. I was immune to the daily routine of waking up and walking to the kitchen for tea. And all the early birds greet you the Salam’s with beaming faces. I always felt like a star walking in so late, gracing everyone with my presence (hahaha).

I got myself wrapped up nicely in a Kashmiri wool blanket. Tasleem always sits near the TV, occupying the blower and the TV remote. Also maybe because all the wiring near the TV so he can comfortably charge his mobile and keep changing the TV channels. I gave a bit of a fight to share the blower that we kept under our feet and covered it from the blanket from the top, to retain the warmth. The TV was blaring out, and Ammi’s favorite TV show was yet to come.

The moment I occupied my share of the blower, the next thing I wanted was food. Ammi, as if she read my mind within seconds, arranged a tray of steaming pan cakes, butter, parantha (a soft roti made with flour), fried egg, and of course a steaming pot of milk tea. It was heavenly. Papa kept joking about how I eat but never gain weight, and that I should live at their place for some months and I will be fat so soon. Tasleem all of a sudden wanted butter roti. Though he had already had his share of tea.

Next to Papa was Daadhi, Papa’s mother. She was down with fever. Extra blankets. But she was smiling at me. That’s all we can do to each other. She didn’t speak good Urdu and my Kashmiri was not so good. We only exchanged words like ‘hungry, sleepy and cold”, because you can use gestures for those. 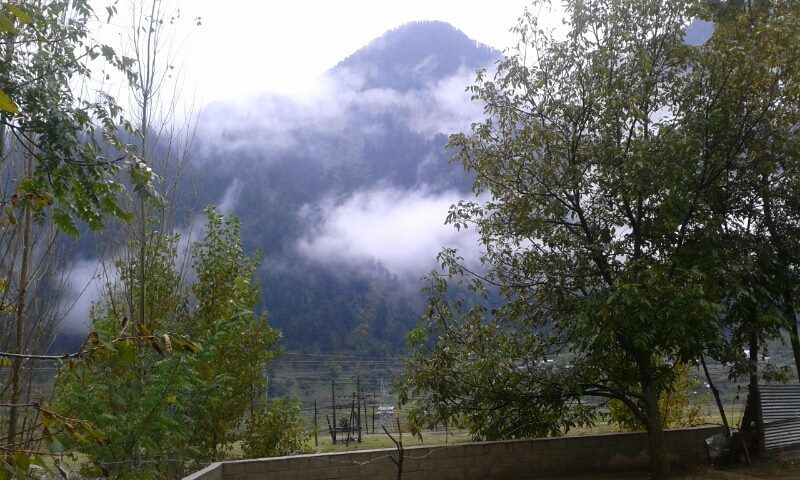 Daadhi must probably be more than 90 years of age, but still fit on house chores, and hunting for herbs around the garden when it’s sunny. She hardly falls sick, except for days like these. She was never worried of how thin I was, and she never asked me to “eat eat eat” (like most grandmothers do) Or maybe she wanted to, but never knew what gesture to use for it. Anyway, she was always the happiest to see me, and the saddest to see me go. She would hug me randomly and talk in her faded whispering voice. She would close her eyes pretending to sleep and I would still be looking at her, and she gets caught. We both laugh.

I was angry that I could not go out to the mountains as Ammi would not let me in the rain. It wasn’t actually raining, but a slight drizzle. But it was enough to turn the roads super muddy. Ammi was still cross that I had not brought socks with me. It was only October! Oh well, I did have socks, dirty from wearing for three days! 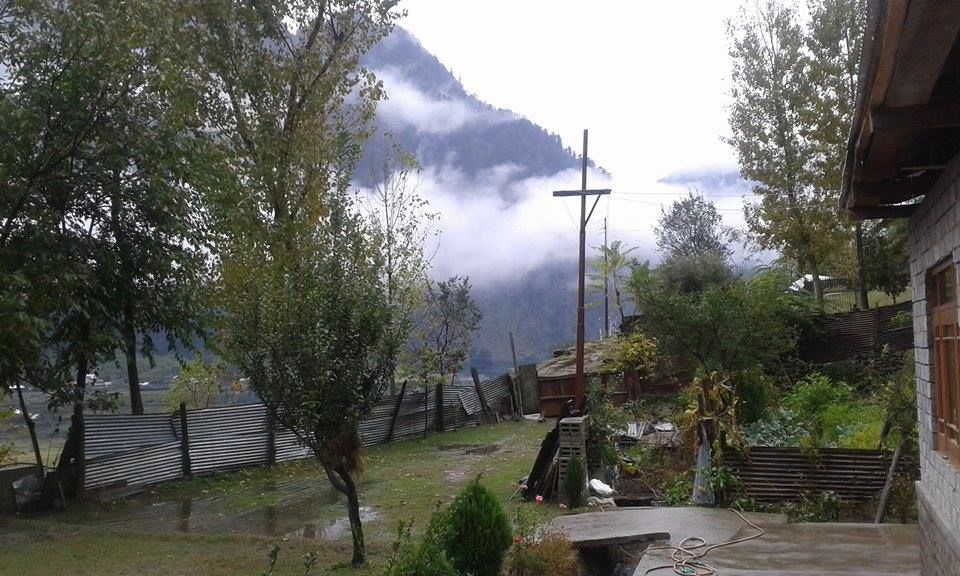 I had just finished my breakfast and was resting till the food digested. I wanted to eat more. Then I heard the blower grumbling. I was thinking that we over-used it; it had been working for days and days, thanks to the continuous rain. I was trying my best to ignore it, when not only the blower, but the whole ground started to shake from beneath. I was still thinking that the blower effect was so strong to move the ground! It was in a fraction of time that Tasleem shouted “Bhukam” (earthquake) and raced out of the house dragging everyone including me, who was busy looking for my mobile hidden somewhere among all those blankets. Of course I couldn’t lose my phone.

We all ran out of the house into the garden, into the rain. Ammi prayed to God, mumbling ‘Bismillah”s and other phrases. I was still trying to locate my slippers before I stepped out into the muddy garden. Heard Papa say “oh this stupid girl, what am I to do with her!” I could feel that I am losing my body balance the moment I stepped outside. Not to mention our house was surrounded by a ring of gigantic mountains, that at the event of an earthquake, we would have no escape at all. I was trying to stand straight but I could not figure out what was moving me sideways.

The house was being tilted without any force, and for a split second I thought I saw my death in front of me. All my life I have walked in to danger and risk, and never had I felt that I might die or not return home. But today was different. Maybe because it was natural and we do not have control over it. The mountain range groaned, and my ears got locked at the very moment. I had no clue of the actions to take in an earthquake situation. I would have probably been sitting inside the blanket if not for Tasleem. We were standing in an open area, and it was all the same for about 5 minutes. Then, just like a river calming down after the rain, the gliding smoothed, and things started looking straight again.

I was still not ready to go inside. We all waited for another 10 minutes until we moved into the house again. The TV was still on surprisingly, with breaking news posts all over the channels. Turns out the earthquake was born in Afghanistan but had hit Pakistan and North India very badly. I called my brother in Lahore to check on him, but of course the mobiles were all out of service. Later, as it turns out, he was fast asleep with no clue of the earthquake. He had only seen people dead and buildings collapsed after he woke up.

I’m not going to further explain how Tasleem started giving his lecture about how earthquakes happen, and the layers of the earth and so on. I didn’t even tell my mother of how bad it was. She would have made quite a scene out of it. She would have told me why I have to go to Kashmir when it is raining (Though it was all sunny when I started the journey). I was only thankful of the fact that I was alive, and I could go home in one piece. Later on I realized it too was an adventure, and sometimes an adventure “could” take you to the verge of death.

This blog was originally published on 'The Curious Pen'