Ride to Kodaikanal and the Incredible Karuna Dham | Utopia Amid Dystopia

Bangalore is a heaven for travellers. The city has a pleasant weather throughout the year - 2 or 3 months of moderate winter followed by about 2 months of manageable summer, and rains for the remainder of the year. No extremes. You can go to Hampi over a weekend to explore ancient caves in blistering heat, or you can go to Gokarna/Goa for some beaches. There is Pondicherry on the other side and then there is Kodaikanal on the border of Tamil Nadu - The queen of hills. I had been meaning to explore Kodaikanal for the longest time and finally got a chance to visit it during a four day weekend.

Karuna Dham is a natural retreat located on the outskirts of Kodaikanal. Wild jungle spread over twenty Acres of a hill that offers a panoramic view of Kodaikanal. The dham has twenty cottages, a common kitchen - games area (Govindas) and a yoga space cum auditorium inter-spread across 20 acres. Most of the area is untamed wild forest. The dham does not have wifi and cellular network is scarce (It's a retreat). The owner, Chitra, will narrate stories of how people have been bit by snakes in the past while roaming around the farm in a very matter-of-fact manner, and there are dogs too, a lot of them.

I had booked a dome cottage for my stay. As the name suggests, this was a dome shaped cottage made of natural material. All the Cottages are created using the unique technique known as Earthship Biotecture. 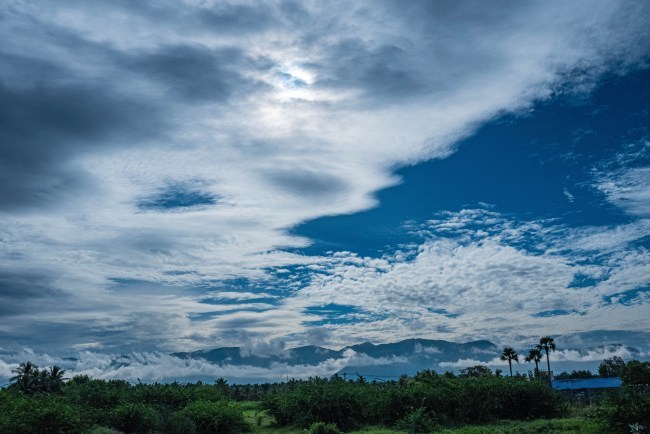 Cloudy skies on the way to Kodaikanal

As usual, my ride started at 6:00 am in Bangalore. This was my first ride with a professional Camera - The Fujifilm XT 100 - also, my first time doing photography on professional equipment. The pictures shared on this blog were clicked on the same camera. 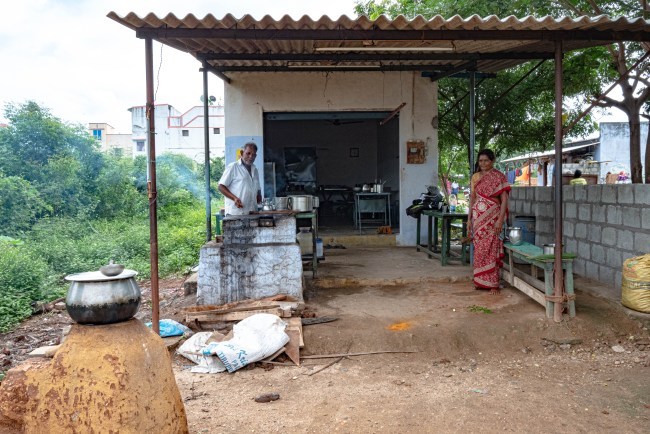 Local Dhaba on the way to Kodaikanal

Bangalore to Kodaikanal is a straight highway till the twisties start. And once they start a few kilometres post Dindigul, it becomes a lot of fun. There are about 50 kilometres of twists and turns between Theni and Karuna Dham. It had started raining while I was crossing these, and that led to the roads being foggy. Fortunately, it was noon so lighting did not become as big of an issue as it could have become. 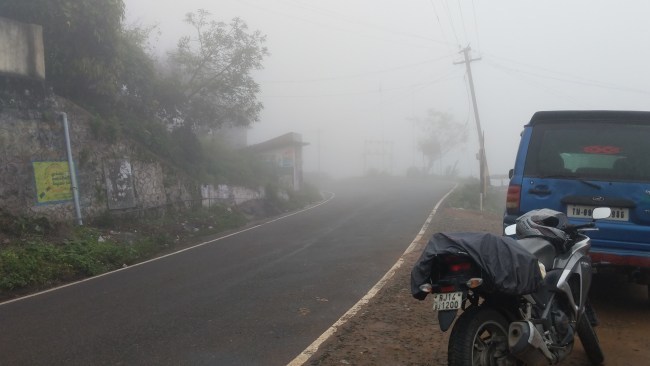 Twisties on the way to Kodaikanal - Low visibility due to Fog

Now, here's a peculiarity about Karuna Dham, and this is exactly what happened when I went to Butterfly Island for the first time - Google Maps does not show the way to Karuna Dham. It just stops a few kilometres from the exact location. The map ends in the middle of nowhere! The route just stops and shows Karuna Dham at some distance with no clear route leading to the Dham.

The road from this point onwards is just an unpaved trail full of potholes, dirt and rocky terrain. As I mentioned, it was foggy that day, and there was nobody to be seen around the trail. I tried calling the people at Karuna Dham for help, but there was no cellular network.

What followed, was the most difficult off-roading experience of my life.

There were multiple factors that led to me being disoriented - Visibility was low, nobody knew where I was, and I was not sure if I was on the correct route towards Karuna Dham. But I kept going (not like I could have done anything else). It was evening by then, and the sun was setting. There were steep highs and steep lows, and slippery ditches that I somehow navigated through and ultimately reached the destination - Karuna Dham. 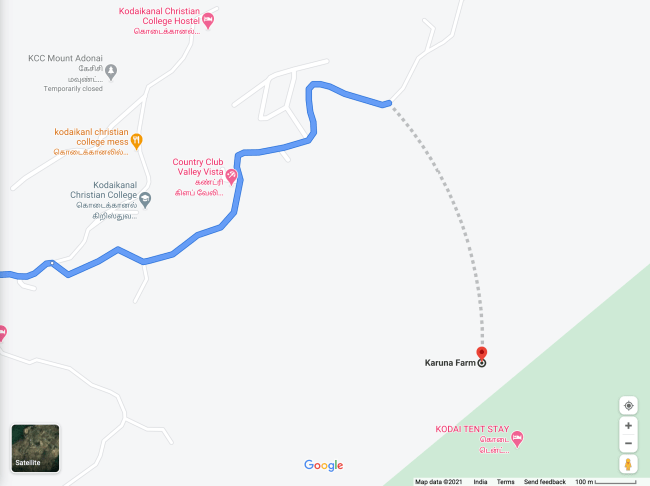 Google Maps and the confusing final mile towards Karuna Dham

The entrance had a shed for parking my motorcycle, and another short door that opened up to downward steps leading to the central kitchen and gaming area - Govindas. 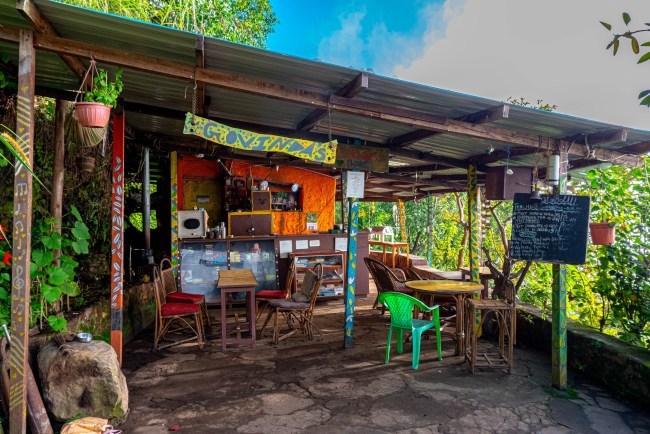 I walked down with my saddle bags in my hands and fell on the floor of Govindas. I was tired beyond measure and just wanted to doze off. Also, there was a waterfall right next to the kitchen - visible through the glass panes. The sound of water falling on the ground, next to the foggy view of Kodaikanal, dogs running around me - felt very dreamlike, incredible to me and i just sat there, gaping at the experience. 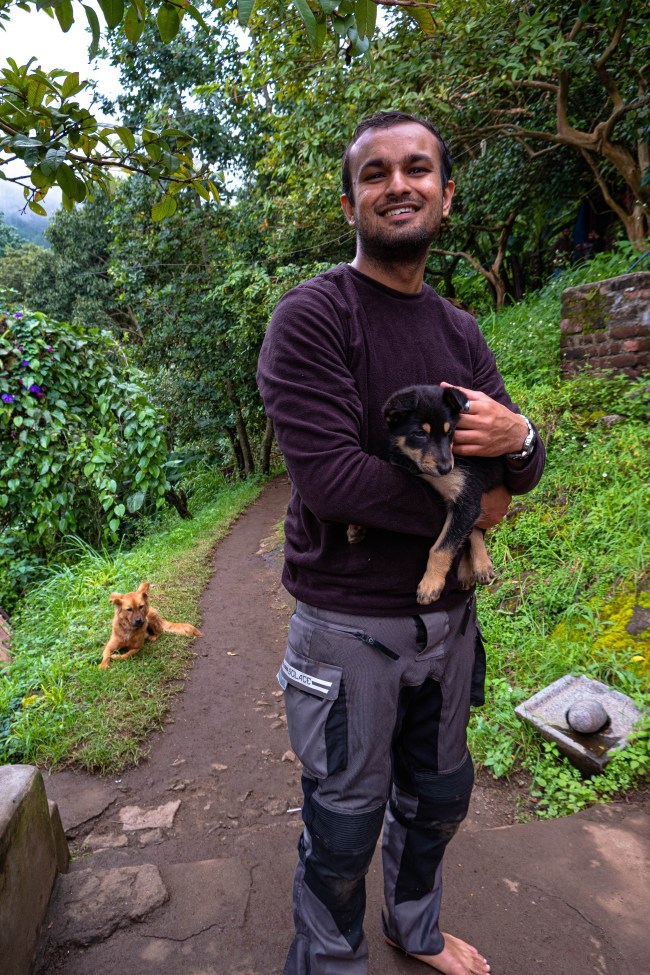 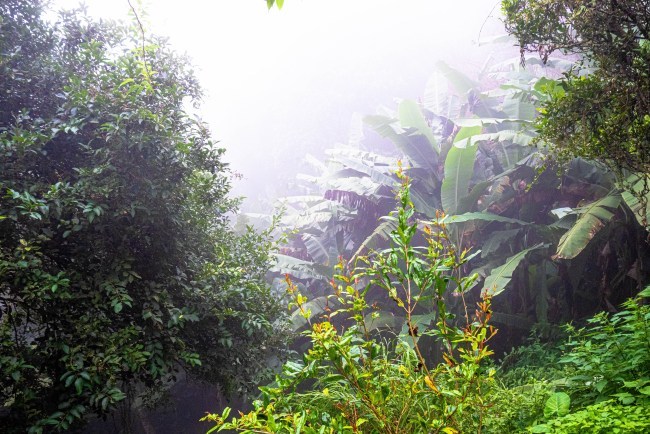 I was roused from my trance by Chitra joining me at the Kitchen. She had brought the keys for my Dome Cottage. I was supposed to walk further down the hill, while carefully avoiding the plants and flowers along the way - there were written instructions on painted signboards that led me to the bottom of the hill, and next to the stream that originated at the waterfall that I had just witnessed. This stream was to be crossed very carefully as the sides were slippery, water was very cold, and the stream very fast. 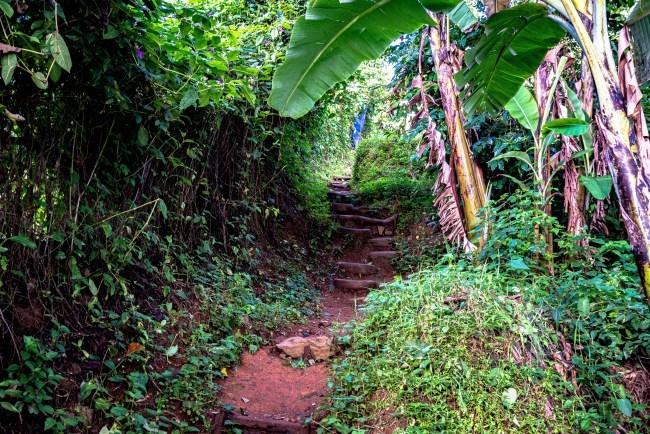 The trails leading to Sunrise Chalet at Karuna Dham

I crossed over to the other side and climbed a few steps. And was awestruck, again. My dome cottage, Sunrise Chalet, was on a hillside. There was the entrance of the cottage, and next to the entrance was my personal kitchen. Next to the kitchen was my personal garden - small, but a garden nonetheless. And next to the garden was a steep drop. This was the end of the hill. I could see the entire city from here as well - right outside the Chalet! I just sat there till the end of the night, soaking in the absolute beauty of the place, lost in my thoughts. 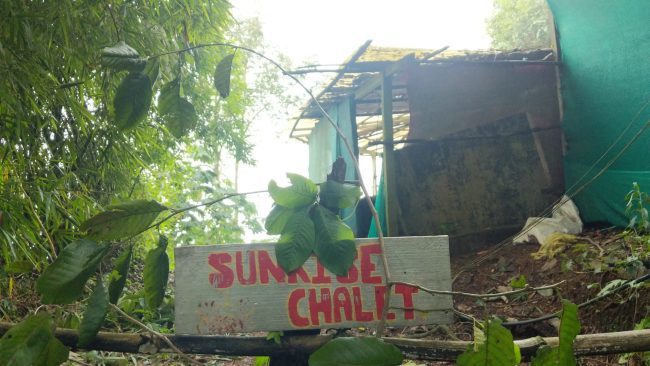 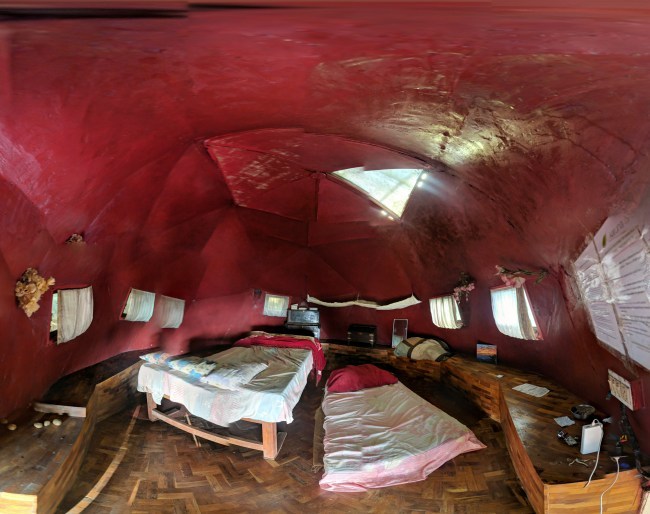 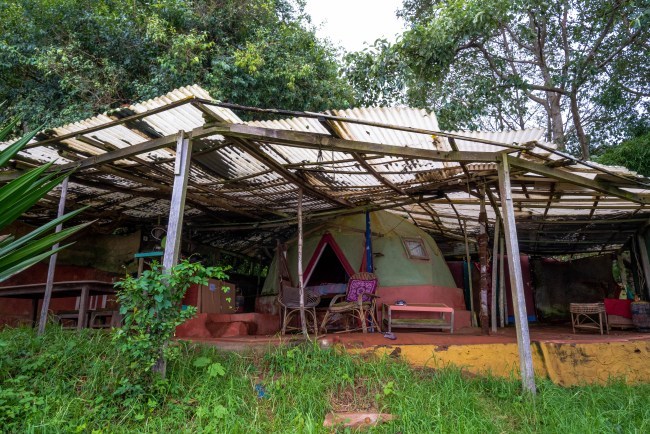 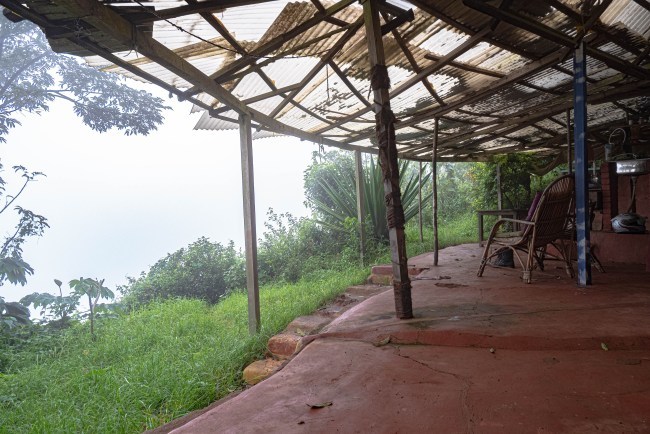 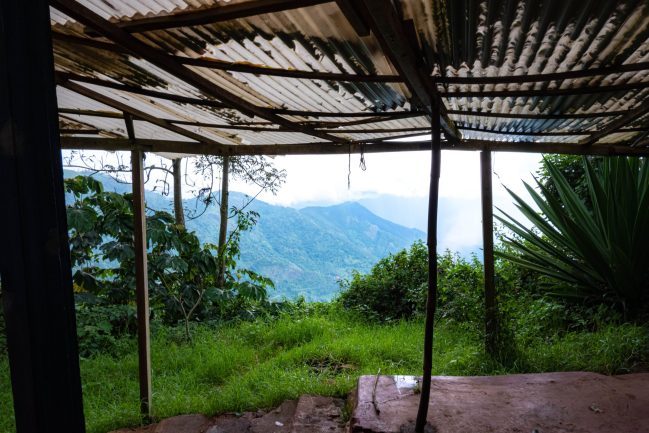 I had a lazy morning after a very deep sleep in the night. It was extremely foggy outside the Chalet. Despite the sun being up, there was hardly anything I could see due to the fog. Moments of clear sky were few and far between. Walking back up to Govindas, I kept thinking about the off road trail that led to the dham. Upon discussing with Chitra, I got to know that there used to be a jeep that ran through the trail and I was supposed to call her up before coming in order to book a slot in the vehicle. She also pointed out that the trail was not that difficult, and multiple motorcycle riders had enjoyed it when they had visited in the past.

This led me back to the trails. Turns out, it wasn't so bad. I ended up going through it to and fro 3 times! Fell in love with the trail that was difficult the previous day mostly due to the fog and uncertainty. It took me about 20 minutes to cross it and grew over me as I went through it the first time.

Panoramic view of the trail

I ended up going to the nearby stores in Kodaikanal and got some food for lunch. It was already noon by the time I reached my cottage. Post lunch and a small afternoon nap, I was ready to wander further onto the Dham grounds. I proceeded to what was known as the 'Sunset Point' - This is a huge rock on the side of the cliff, offering an amazing view of Kodaikanal. I stayed there till the sun had fully set, clicking pictures whenever the never ending fog allowed, enjoying the views.

The night was spent clicking some more pictures of the stars and the night sky. I was not particularly good at it and ended up wasting a lot of shots that could have been better pictures in the hands of more seasoned photographers. 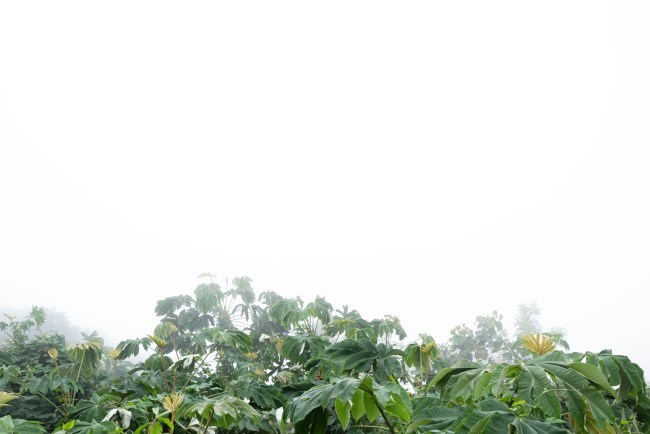 Kodaikanal had fog that allowed me no visibility!

I had planned my first ride to Kodaikanal for 2 days, thinking that I would spend 1 full day going around the city and exploring various spots. But I ended up falling so much in love with Karuna Dham that I just spent the entire duration of my stay exploring just the hill on which it was situated. There was just so much to do at Karuna Dham! Such greenery and adventure in the forest that I just spent even my last day in Kodaikanal just going about the Dham and walking around randomly up and down the hill.

There is not much to write about Day 4 - I started early in the morning, and took the highway back to Bangalore. The ride fairly simple and nothing noteworthy happened during my way back. Other then my giggles on the trails right outside Karuna Dham.

I carry the memories made at the Dham, they are as fresh today as they were when I was making them. Kodaikanal was my destination, but the journey at Karuna Dham became my destination in this one. And this turned out to be one of the most beautiful rides I have been a part of till date. I will definitely go back to the Dham once again in this lifetime.

Check out my Hampi Guide here. If you like to ride around on motorcycles just like me, check out my tutorial on ride planning here.