Maharashtra Travel GuideMaharashtra TripsInteresting Facts You Must Know About The Mysterious Kailasa Temple Of Ellora Cave No. 16

Interesting facts you must know about the mysterious Kailasa Temple of Ellora Cave No. 16

If you get excited to know about mysterious places and the scientific facts, myths, and controversies behind their existence then you must visit this incredible, ancient, world famous mysterious "Kailas Temple" of lord Siva located in the cave no. 16 of Ellora, Aurangabad, India.

How to reach : There are many bus, flight and trains for Aurangabad. Prefer to go by bus as you get multiple options for price, timings and amenities.

If you want to visit Ajanta caves and other spots you must extend your trip to two days. Including the hotel and food charges the total cost of the trip will be upto Rs. 3000/-.

Aurangabad is a very popular tourist place mainly because of Ajanta and Ellora caves. Ajanta and Elllora caves are UNESCO world heritage sites. If you like ancient structures and designs than this is a must visit place for you.

Places to visit in Aurangabad :

Ellora caves are located at 28 Kms from Aurangabad bus station. There are around 100 Buddhist, Hindu and Jain caves at the site, 34 of which are open to public.

Ellora is popular as it features the largest single monolithic rock excavation in the world, Kailasa Temple. It's located in the cave number 16 of ellora.

Here are some interesting facts about this temple.

* It’s believed that when discovered it was completely covered by white plaster and looked like kailash mountain, that's why it was given the name “Kailas Temple” and dedicated to lord siva.

* This temple is a megalith, entirely carved out of a single rock. It was not made by adding stone blocks.

* This is the only temple in the whole world where carvers started from the top of the rock and excavated downwards.

All other rock constructions of rest of the world are made by cutting the rock or mountain from the front and carving it as they go along. This is a common technique for constructing any structure from a rock or mountain. It is called “Cut – in” technique while Kailasa temple is the only temple which is build by using exact opposite technique called “Cut-Out”.

* Actual date of construction of the temple is not known. The rock is known to be around 6000 years old but when it was carved into a temple is still a mystery.

* According to historians and archeologists it is estimated that approximately 400,000 tons of rock was removed from the site in making of this temple. This sheer amount of heavy rock was never found or seen by anyone in and around the site. Where was it used or dumped is still an unanswered question?

* Historians confirm that it was constructed in less than 18 Years. That means, back in those years, 400,000 tons of heavy rock was scooped out by using ordinary equipment like hammer and cutters and the temple was ready with beautiful and intricate carvings in just 18 Years.

* It has the largest cantilevered rock ceiling in the world.

* As it’s made by cutting a single rock that too from top to bottom, every single design and measurement was planned very accurately as once it’s cut there was no chance to change it by adding any extra stone or piece of rock. This whole temple is made of only one rock.Not even a small piece of rock was joined separately for any design or support. Now can you imagine how they managed to construct bridges, elaborated balconies, staircases with multiple levels, underground tunnels, drainage and water harvesting systems. Amazing !!! isn’t it ?

Can humans really construct such a structure? Is this temple actually built by extraterrestrials?

Some researchers claim that it is impossible to make this type of advance structure even today with highly advance equipment and technologies.

So, was it constructed by any other much advance civilisation and not by humans

Here are some scientific facts behind this logic :

1. A huge rock was carved into a beautiful temple with advance engineering designs and intricate carvings on the walls by removing 400,000 tons of heavy rocks in just 18 years.

Let’s assume that 7000 workers were working like robots for 18 Years 12 Hrs a day with no breaks at all.

That means 60 tons per day and 5 tons per hour

And this is only about scooping out the rock, what about the time taken for designing, planning and carving. How did those workers, thousands of years ago manage to carve out this temple using only hammers, chisels and picks.

This is impossible even now!

2. In 1682, A muslim ruler Aurangzeb hired 1000 workers for three years only to destroy this temple completely.

Even after continuous efforts workers couldn’t destroy the temple. They could only damage and distort some carvings. At last Aurangzeb gave up and left the temple as it is.

Humans could not even destroy this temple. Was this indestructible structure really made by humans at all ?

3. Some researchers strongly claim the existence of a huge underground civilisation under these caves.

There are many deep tunnels and narrow passages in the ellora caves. They can be seen from outside but after 10 feet or so they get too narrow for a human to enter. The cave guard informed that there are many tunnels and entry to many of such tunnels are restricted now. You can see bars and lock at the entry of the caves having such tunnels.

What was the purpose of such tunnels and narrow passages? Those narrow passages are constructed properly for some purpose. If humans cant even enter those passages, how they made it and for what purpose? Can there be a hidden underground city? Was this all made by tiny humanoids?

4. There are many ventilation shafts and holes on the floor of all the caves. No one could find the actual reason of these holes. Were these made for air circulation for underground city?

5. All the wall paintings and carvings depict existence of an underground civilization and tiny humanoids. Carvings on the walls have big images of god and goddesses and below a level tiny humanoids and animals are shown.

6. Historians confirm that cave no. 16 is the oldest structure among all the caves in ellora. Still, the architect and design of this temple is much more advance than that of the other ellora caves.

7. Kailasa temple is the only structure noticeable from the air. Because of a circular design and statue of four lions on the terrace, the arial view of Kailasa Temple shows a big “X” mark. Was that created as a signal for extraterrestrials to spot the location?

This temple is one of the most mysterious structures of the world and still remains a mystery.

If you visit this place do not forget to hire a local guide. You can negotiate upto Rs 50 – 100 for a guide. You will surely enjoy the stories they tell about paintings and carvings. 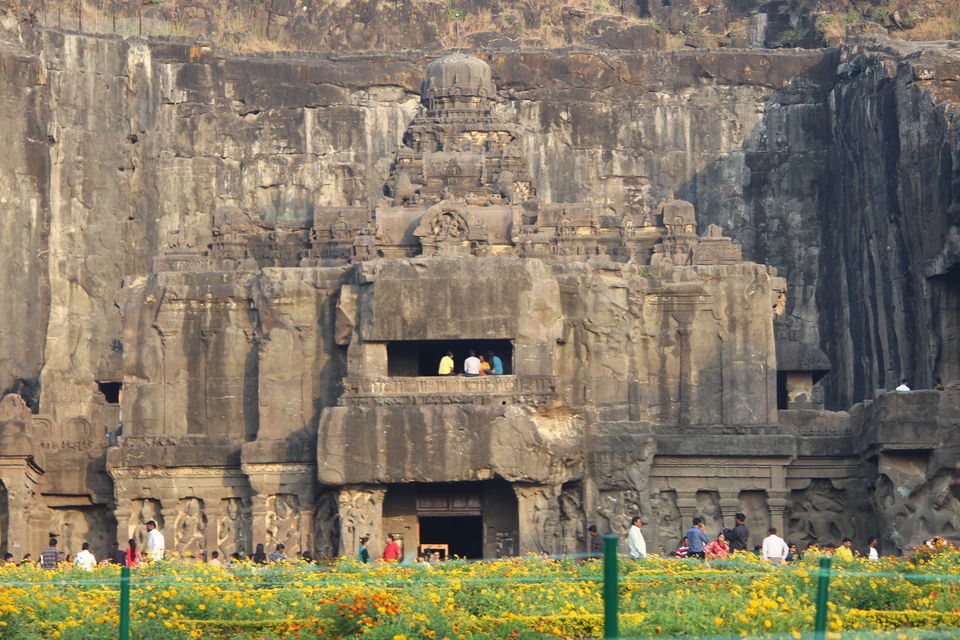