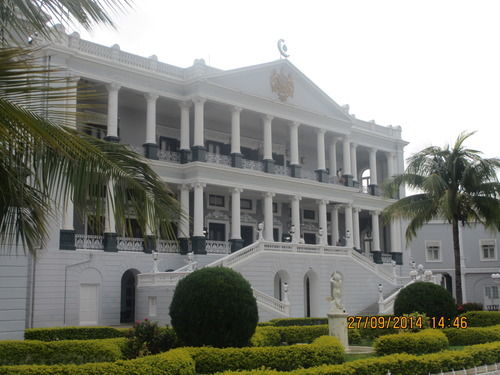 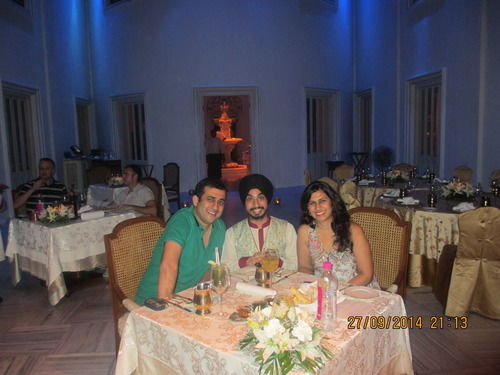 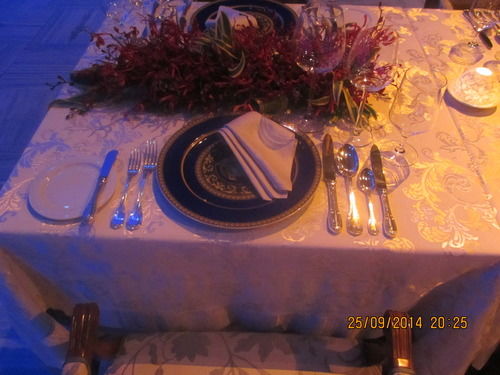 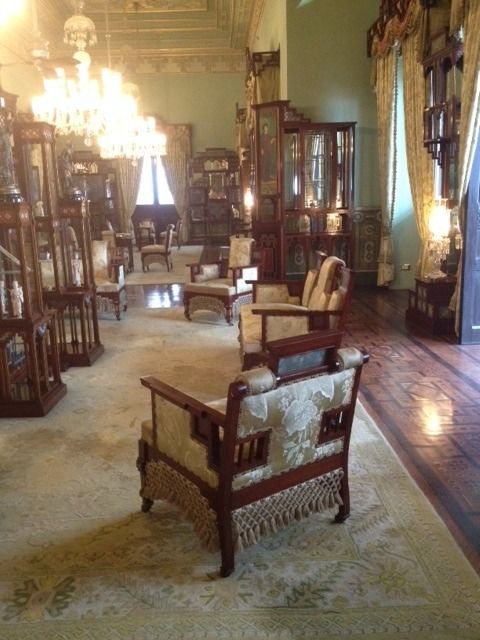 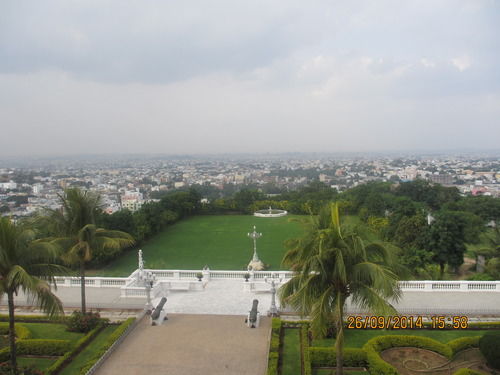 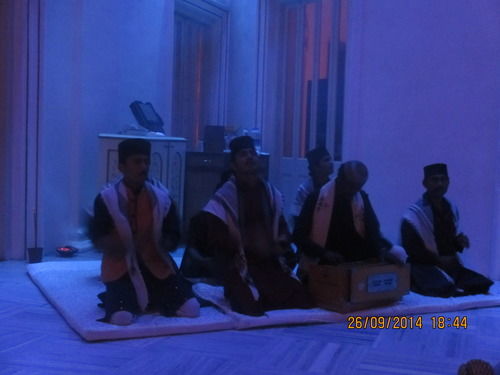 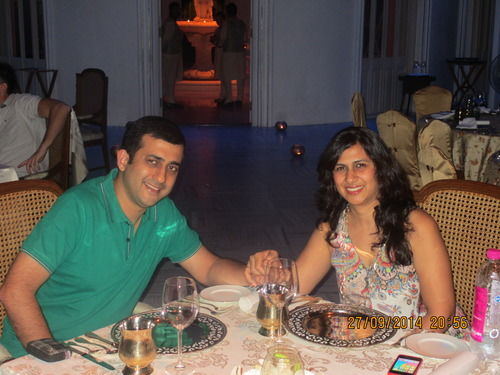 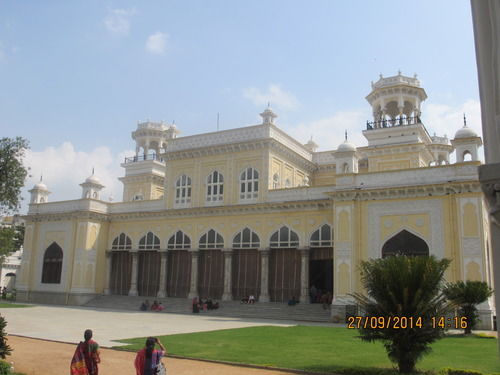 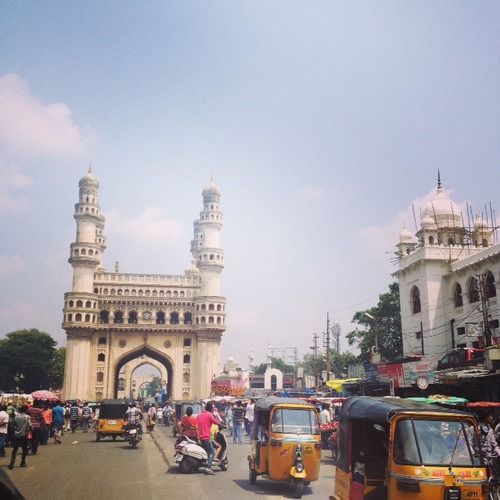 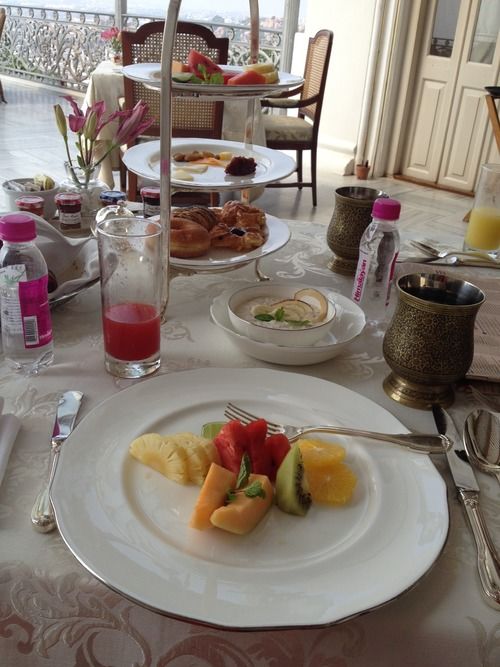 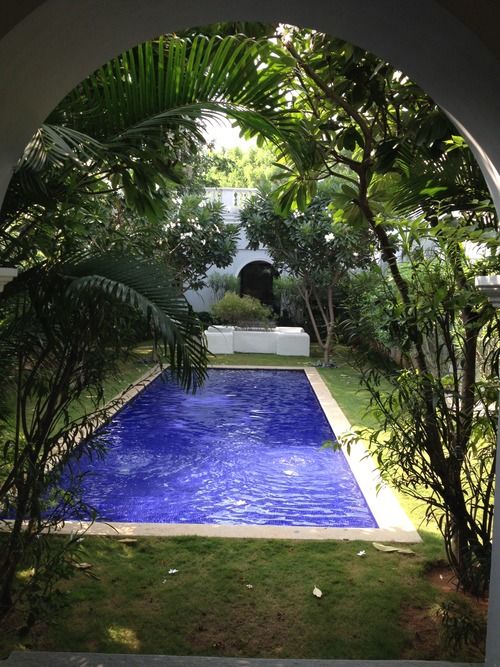 Wow! The superlatives to describe our 3 night stay at the Taj Falaknuma Palace are too many. WOW pretty much encapsulates our experience at Falaknuma. Exemplary service, out of the way requests being catered to, service beyond the call of duty – we were just wowed throughout our stay here by every single member of the staff. And, this is just about their service. I haven’t even got to the actual palace and its amenities yet.

We were picked up at the airport by a liveried chauffer – our car had a menu of offers from magazines, to perfect car temperature, even a music menu. I’m a DIY mum of 2 boys – I don’t get people asking me what music I want; it’s normally me being told what they want and I have to do the honours! This was a treat as far as I was concerned!

A 45-minute drive into the old city of Hyderabad, and we were at the main entrance to the Falaknuma Palace. The entrance was so regal; I thought it was the palace itself!  It wasn’t. As we got off our car, we were escorted to a 100-year old beautiful horse drawn carriage, our ride to the main palace.  Wow again! If this was how high the bar was to be set, our expectations were going to be pretty lofty!

As we rode through the spectacular palace grounds (it’s set on a 300 acre hill, 2600 feet above sea level with views over the city), we felt like royalty! And more so when our carriage stopped in front of the palace and we were greeted by several staff members with the Palace crest along with cold towels and a drink. One poor guy even had to hold my hand bag for me while we were allowed to enjoy our drink (did I mention, we had a choice of drinks?!).

Falaknuma literally means Mirror of the Sky (Falak = sky, Numa = like). The romance of our stay here began with the name alone. As we were escorted up the stairs (left stairs to enter; right stairs to exit the palace as per palace norms), we were showered with rose petals. Oh my god! We were royalty! We were led through the main entrance, to the beautiful palace library and into the zenana room. The library is a treasure trove of first edition books. And the pretty zenana room was once a gossip room for the ladies during the time of the Nizam! As I walked into the room, there was a little cake with a little candle and several not so little staff members standing around, to wish me a happy birthday! This holiday was my husband’s 40th birthday present to me. He had casually mentioned it to the hotel, and it was such a simple gesture but it made me feel so special, not to mention embarrassed as they sang for me J.  The wow factors just wouldn’t stop and we hadn’t even got to our room yet! At this stage, I was just stunned at the warmth of this place and its people.

There was more to come. The hotel had upgraded us to a suite – the Bahadur Shah suite! Our suite was beautiful – understated luxury, just the way we like it. The bathroom was huge and the bathtub was the original bathtub of the palace – built 120 years ago! Again, WOW! Our guest relations person checked us in. Check in was in the room itself, a norm for the Falaknuma as they don’t want guests to feel like they’re in a hotel. The palace has 10 guest relations people and their role is to look after the needs of the guests, like a personal concierge service. Our “person” was a young kid called Mansheet and he made our stay there very, very special. At every step, he went out of his way to ensure that even the smallest request we made was taken care of.

Food: The palace has 2 restaurants – Celeste, which is their breakfast venue as well as continental food destination. And Adaa, their fine dining Indian restaurant. The food at both restaurants is nothing short of amazing. The service, which I cannot stop harping about, is exemplary. Between the 2 restaurants, is an open air (but covered on top) private dining venue called Gol Bungalow. It has spectacular views of the city and dining here is quite an experience. Our first day here had Ratan Tata host a formal dinner for various dignitaries at Gol Bungalow – the setting was just amazing. Fit for royalty and a feast for the eyes!

Breakfast at Falaknuma is an absolute treat. It’s not a typical buffet, but a sumptuous repast. Croissants, a huge selection of fruit, Danish pastries, pancakes, cheese & crackers and a selection of local Hyderabadi and South Indian fare. The choice was unbelievable, and its only breakfast! At each meal, whether breakfast, lunch or dinner, some staff member (senior and junior) comes and chats with you, giving you food tips, sightseeing tips and information about the city and the palace. It’s a like a local buddy dropping by.

Post a relaxing breakfast, we signed up for the Spa. Oh yeah – this was the holiday of dreams. Be pampered, waited upon hand and foot and when you get tired of all this pampering, you go get yourself a massage to relieve your body of all the undue stress! Post our indulgent spa, we had a snooze, a hitherto unknown concept called an afternoon nap!.

Later, we decided to be very English and very propah, and made our way to the Jade Terrace for High Tea at the Falaknuma Palace. The Jade Terrace is part of the Jade room, a grand and beautiful room (and I mean beautiful!) which used to house the extensive Jade collection of the erstwhile Nizam and was a room used to entertain dignitaries from all over the world. The terrace overlooks the Palace lawns and the city of Hyderabad below it, including a glimpse of the Charminar in the distance.

High Tea at Falaknuma Palace: Even though a stay at the Falaknuma is a non-stop food fiesta, the high tea is not to be missed. Skip lunch if you like. They have 2 menu’s – a Nizam’s menu with Indian snacks and desserts and an English menu with well, English snacks. Samosas for the Nizam and Scones for the Queen. It’s a sensory delight, beautifully served and the spectacular views add to the experience. There were several locals there so I gather this is a pretty popular and special afternoon for all guests! Food in our tummies, we then headed to the main lobby terrace to meet a certain Mr Prabhakar, the in-house Palace historian who conducts a Palace tour every evening at 5.30pm. This service is complimentary to hotel guests. It’s a one hour tour on the palace, its paintings, its rooms, its sculptures and the history of the Nizams and their families. It’s a fascinating and romantic insight into the palace and the city of Hyderabad as well. One of the highlights of the tour is the room which houses the world’s longest table seating 101 prized guests. As you admire the setting and imagine being seated with aristocracy, you are served sparkling wine by liveried staff so you feel part of history and Nizam royalty. I was wowed yet again by the little detailing.

As we finished our tour of the Palace, we walked over the Gol Bungalow to enjoy a Sufi Qawalli performance by local musicians. With the city lights blinking in the background, a glass of wine in your hand, it is a musical delight and the hotel treats you to this experience every single evening. Your evening then ends with dinner at one of the restaurants. Or, you can opt for in-room dining but where’s the fun in that?

The next morning, after another exciting breakfast, we headed out into the old city, passing by the Charminar. We spent our morning at the Salar Jung museum and the afternoon at the absolutely beautiful Chowmala Palace. It’s an absolute must especially for those staying at the Falaknuma Palace because it provides a further insight into the current and previous Nizams and their families. It also houses beautiful vintage cars and carriages owned by the Nizams.

Our last night at the Palace was a very special unique, private dining at Gol Mahal. The food was the best Indian food we’d ever had and the entire 3 hour experience with wine and twinkling lights and once again, outstanding service was very romantic and oh-so-special.

Before I check out, I want to give you a little information on the history of the Falaknuma Palace. If history is not your thing, skip this last part. I’ve tried (hard) to give you an abridged version, but I may also have failed.

The Palace was built in 1885, not by the then ruling Nizam, but his prime minister. The prime minister had travelled extensively as an ambassador to the Nizam (the Nizam himself never travelled overseas) and was fascinated by the castles and palaces of Europe as well as various paintings and artefacts that he saw. He collected several pieces on his various trips and brought them back with him. He then decided to build a palace for himself where he could house these artefacts. He built a grandiose palace on a hill overlooking the town in the shape of a scorpion, as it was his sun sign, and called it Falaknuma – Mirror of the Sky. To cut a long story short, when the Nizam visited him at Falaknuma, he fell in love with it. The Prime Minister offered to him as a gift, but the Nizam insisted on paying for it. He had come to stay for just 1 night, and went on to stay there for 16 years! After him, no Nizam ever stayed at the Palace. For 50 years, the only guest at the Palace was in 1951 – our first President, Dr Rajendra Prasad. The rest of the time, the palace had no overnight visitors and was left to weed. The current Nizam’s wife – Princess Esra (whom he divorced) – was finally entrusted with the care of the palace by her mother in law. (A little gossip – the Nizam now lives in Australia and has 4 wives. Now in his 80’s, he realised the folly of his ways and regrets divorcing the beautiful Princess Esra, his first wife!) The Taj group of hotels acquired the property on a 35 year lease in 1995. For 5 years, no work was done on the palace. Then in 2000, extensive restoration work on the palace began, where every detail was carefully overseen by Princess Esra who wanted to see the palace restored to its former glory, exactly the way it was. She lives in London and would come regularly to see the progress of the palace. Due to the nature of the work involved, it took 10 years to restore it and it was finally opened to the public in 2010. The result is stupendous and I would say kudos to the Taj for the homage they have paid to the palace and its original inhabitants. Not only is the Palace beautifully maintained, guests are made to experience the feeling of being royalty throughout their stay. As the promotional video of the palace states, and I wholeheartedly agree, when you stay at the Falaknuma Palace, you are not just staying in a hotel. You are reliving a part of history.