‘Kameeni Ghat!!!! What kind of a place is this?’ exclaimed my friend Nishant in apt surprise.

‘No, no….its Tamhini Ghat, south west of Pune’ I corrected, ‘It’s a ridge in the Sahyadri that erupts in monsoon greenery…’

It was July – peak monsoons in Mumbai, which meant every insane mind would head out to the green hills to the east, at the drop of a hat - or should I say drop of a rain! No wonder then, we were pouring on a large A0 map of Maharashtra (thank you Outlook Traveller) and scouring for new places to explore. The problem was within a couple of years, we had ticked off the usual Khandalas and Lonavalas nearby and hence the need to scour for the farther and lesser heard of ones.

At first the name was not encouraging to our crackerjack group – yes, it definitely did not sound romantic enough, but as I mentioned, we had run out of places to tick; so we packed ourselves in a car and headed off on an early overcast Saturday morning. I can never fall short of praising the highways outside the city meandering beneath the hills – the feel of the speeding asphalt can only be outclassed by the gaze of the emerald hills, made enigmatic by a veil of greyish clouds, which seem to express their insanity by pouring over to take the guise of a frenzied cascade sliding down the hills.

The journey on such roads with such backdrops is always intoxicating. You keep chasing the clouds and end up in the interplay between the redeeming rains and the sluggish sun. The inebriation keeps increasing when you start ascending the hills and when you reach the tops, get overwhelmed by the watery paradise, your inner instinct urges you to un-tame yourself. We were excited thus when we reached Tamhini Ghat and to add to our delight, what greeted us was a battery of cascades pouring out in almost any direction you could point to. We had seen seasonal falls in the Sahyadri before, but this seemed grander than ever before – this was cascade country! It was perhaps how the hills were expressing their gratitude to the rains – tears of ephemeral joy for returning to their ilk and keeping an unsaid promise. 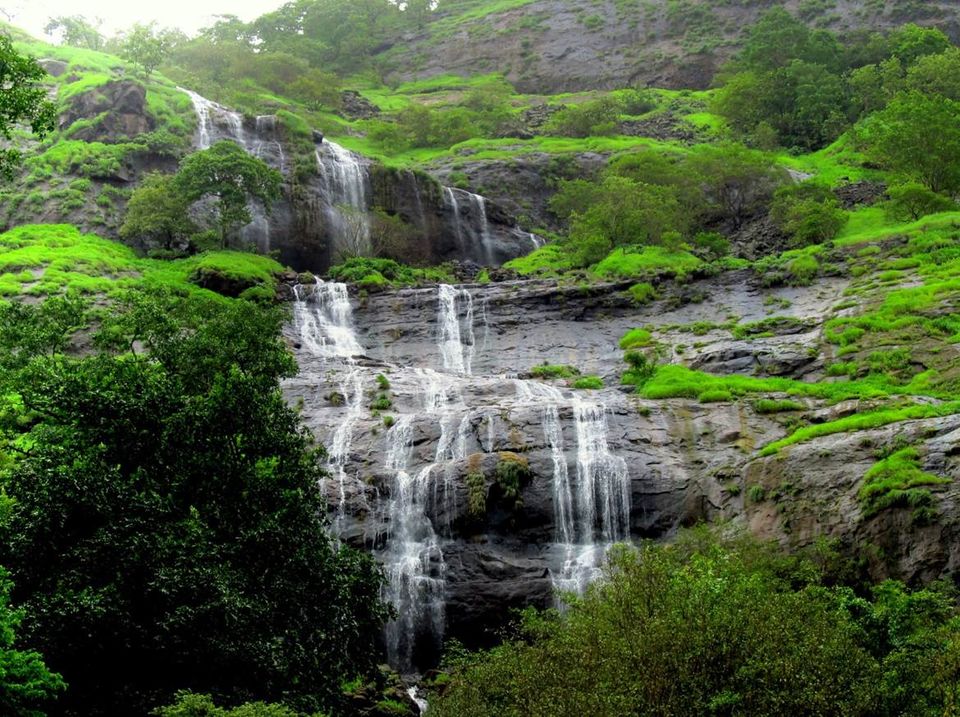 There was no doubt that we were feeling the urge to drench ourselves in the waterfalls. But then came the task of snobbishly choosing a waterfall! Most were filled with the early birds (of course we didn’t want to share our cascade!), some did not have the velocity to meet our craziness, while others were too steep to get to. We kept moving from spot to spot, literally hunting for waterfalls, when we seemed to arrive at a prospective one. But our always careful friend Justice, dipped a toe in the pool, and decided that it was too deep for us. We thus kept moving and was nearly giving up to join another commoners’ cascade, when we spotted a long trickle deep inside the hills. Since there was a wide barrier of trees and shrubs, people had not ventured there yet. The sound seemed definitely promising and with Justice – our sportsman champion leading the group, we were encouraged to go farther ahead. 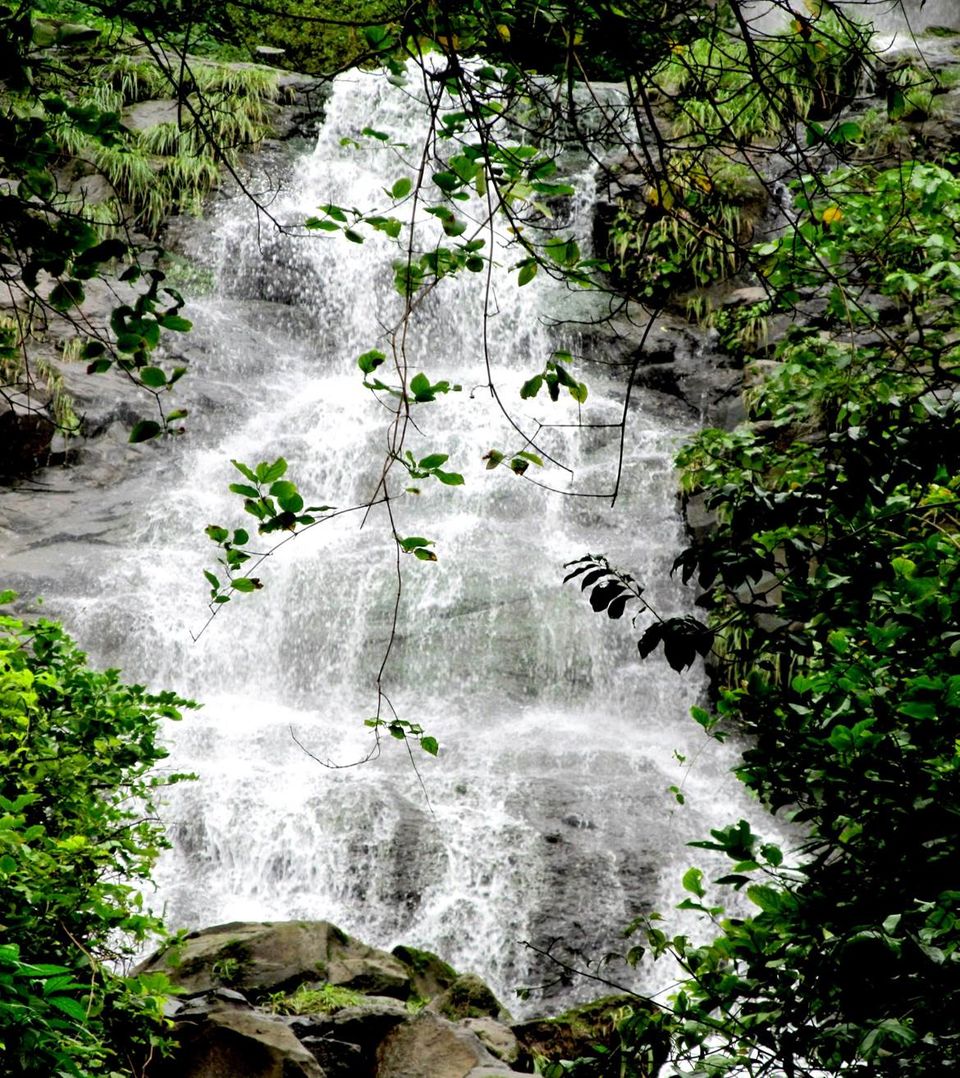 What followed was an amazing and unforgettable hike in the hills – on a gushing waterfall. We literally climbed the waterfall to reach a descent altitude where the waters were wild enough to give us the wash of our lives. Being a seasonal development with torrential flow, the water was not mossy (as you would find in most water covered boulders) – this helped us significantly in our steep climb. Once we reached a favourably high but wide enough precipice, we dunked ourselves in the gushing waters – and shrieked in the icy coldness of the waters. The group became wildly excited and kept exiting and re-entering the waters to douse in joy. The rains added to the excitement and further helped create a surreal atmosphere – enthralled, we shouted and sang – and gave away the hidden treasure we had found. For our ascent encouraged others as well to test their adrenaline. But then, we were satiated, and climbed down, with oxymoron bodies – our legs super careful to not slip on the steep cascade, while our minds were heady and escaping into the pouring rains. 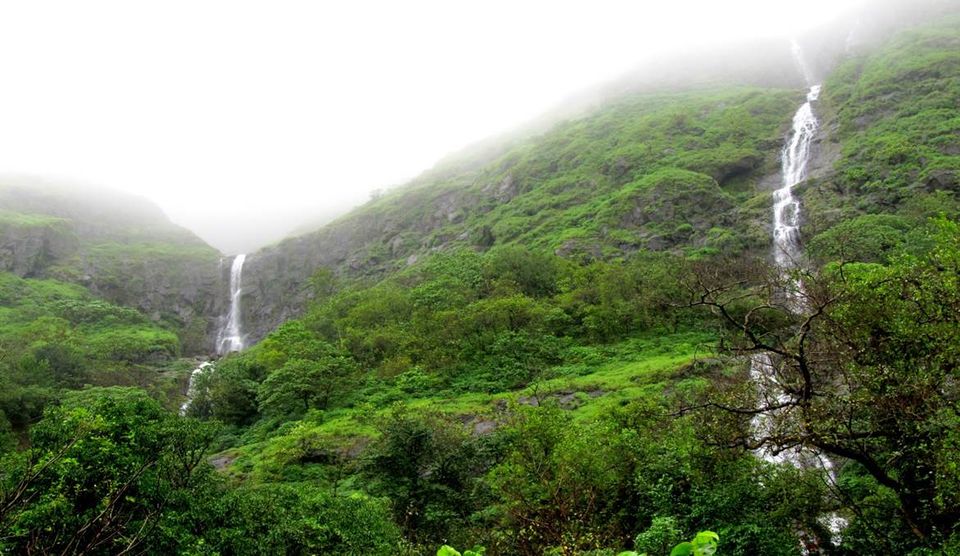 Back down at the base, we were still reeling under the rush of our experience – some warm tea and hot spicy pakoda definitely helped bring us back to steady state. On the drive back, people had mellowed down after the day’s fervour, but the elation was to stay – not for the day, but for months and years to come. Another beautiful day in the greens of the Sahyadri - tick. Walk in the romantic hills – tick. Climb a waterfall…in the rains – tick!