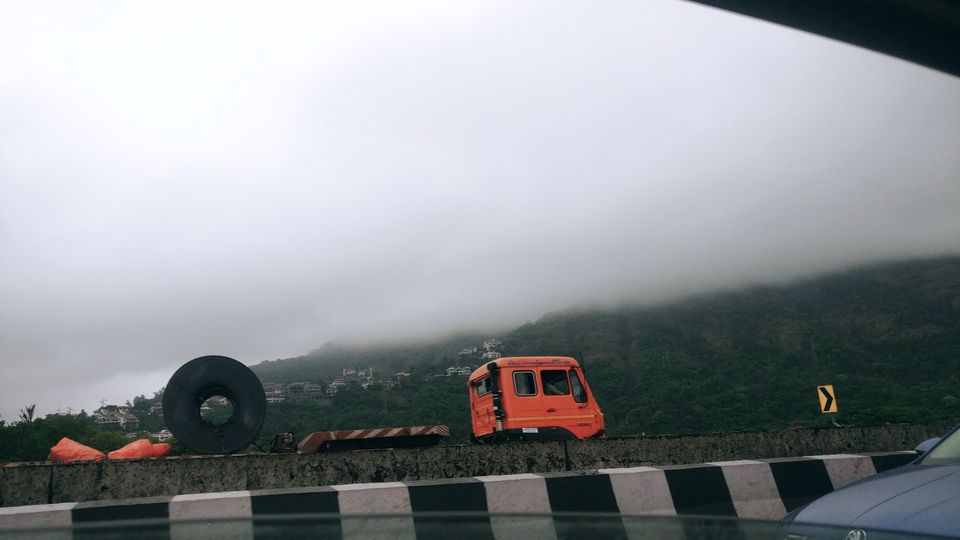 You've heard great stories from people suffering from wanderlust and how they're fulfilling their bucketlist, one place at a time. There are some of us trapped by the societal construct, parental construct. My parents have been very skeptic about me travelling anywhere with friends, and after years of trying, I gave up. No, I did't give up my wish to go on a roadtrip. I gave up trying to convince them. My sister lives in Pune, so technically that is the only place I am allowed to go. I convinced my parents somehow that I'm travelling by bus to Pune while I was going bonkers in my mind thinking about the roadtrip.

So, me and 3 of my guy friends left from Ahmedabad by Car around 7.30 pm. The minute we crossed the border, a sense of rebellion crossed my mind. I have no regret whatsoever. This was not just any trip, atleast for me. I just got over with engineering and was waiting for one good trip after 4 years of mental torture. We found an amazing place which served chicken in the middle of the night. There is something about chicken which is preprared by Muslim Chefs, it just can't ever go wrong.

Now, Roadtrips sound all fancy and exciting. I am not denying that it isn't but there is more to it. One privilege was we could stop anywhere, light up a cigarette whenever the view was breath taking, in the middle of the road and at anytime. My sexist friends didn't consider me a driver when they were taking turns to drive and so I was the one sacrificing my battery and dropped tracks all night which kept them awake. None of us slept with the excitement and uncomfortable seating. We passed the night lighting ciggarettes and joints, discussing everything from future to exes.

Soon it was 5 am, we reached Mumbai and picked up a friend from there. As soon as we got back on the highway, we stopped for breakfast and were back on the road soon. It was a trip like the movies where the kids are on the run to get to some place and there is always that one friend extremely exhausted and tired, some are too excited( that's me). The highway was so scenic, I couldn't take my eyes off of it. It was raining and the Mumbai-Pune Highway is beautifully surrounded by hills. We entered Pune, reached our resort and as we were early we had to wait for an hour or so. We were exhausted from the drive but since we couldn't check in, we thought we'd roam around, pick up some beers and head back to the room in some time. We went to German Bakery KP, it's a cute little bakery with bomb pastries and desserts, and you should definitely check it out if you're in Pune.

We headed back to our room which was more so much better than we'd imagined and had a pool which we couldn't wait to get into. After the swim, we decided to go to a place called "Playboy Bar" which was in Baner, almost 12kms from our hotel. We had our dinner and beers and left because the place was average and we had to pick up one friend from hotel who had passed out earlier in the day and needed rest. We then went to check out Hard Rock, and it wasn't a disappointment. It's a classy place, with just the perfect ambience. Only pitfall is the place is quite costly if you're gonna be drinking.

We came back to the hotel and drank till all of us passed out. The next day we went to Pheonix Mall to check out Viman- Nagar Social. We got drunk before we could get over with the hangover and exhaustion from the day before, had our lunch and headed back to the hotel as were going to go clubbing in the night. It's pretty obvious that 5 people can't agree to everything. So whenever all of us were in the room together, we fought for deciding places, or we fought for next day plans. In the end, somebody had to agree to disagree always.

What happened next was quite unexpected. We planned to go to a cafe for dinner and then to a club. So we dressed up like this is going to be one hell of a night, and it was! One friend had his elder brother in the town who was a Major in the Army. He had to pay them a visit and he invited us too. We were at 11 East Street Cafe around 8 PM when he called from his brother's home and asked us to come. He was already drunk when he called and bribed us into coming saying there would be free booze. Me and my friend threatened the others that if we end up getting bored after skipping clubbing, we would abandon them. Now, us being the cheap fucks that we are, we went for the free booze. We had no idea who this army major was, but boy did he have a great campus and a super cute house, and lived with a dog. He hosted us all night and we were surprised to see how cool he was! There is something about Army guys which makes them so intriguing and interesting.

This was one of our best nights in Pune and it was better than any pub or bar we had been to. This statement relies on many factors. One there was a dog, second, there was free booze and food. I am a person who has some sort of dog phobia, but after around 8 beers of the day, I was in such a mood that I talked to this Army Major about pretty much everything and the first time in my life I had the guts to touch a dog. The night ended in two of my friends passing out and throwing up but it was pretty amazing. We danced all night and listened to crazy stories from the Army major. It was one hell of a task to get these two drunk friends of ours back to the hotel, and we left our car there and took a cab. The cab driver was pretty stoked as soon as he realised two of us are very drunk. One of the drunk friend sat in the front seat with the driver and he talked shit while the cab driver was so awkward that he thought of staying quiet, while we laughed our asses off in the back.

Next day was our final one, and pretty much everybody had a hangover! We checked out of our oyo rooms and left for lunch at German Bakery SB road. The place never gets dull. I've been there before too and it's like a go-to place for me. After lunch we debated if we should visit Lonavala, and I won! We left for Lonavala asap and were back on the road. We reached Lonavala in 1.5 hours from Pune. Monsoon was a bonus to our trip. As soon as we entered Lonavala there was a constant smile on my face, I have never travelled much. Most of it was with family as a kid, so this was a big deal for me. Lonavala is a cute little hill station with pretty resorts and houses and it was just the perfect weather that day. We were lost for a bit and took the long road, but the journey to the top was something in itself. Soon we reached to the Lion's Point, our destination.

My friends cursed me through out for dragging them there on such a busy day and at peak time. But as soon as we got on the edge and looked at the view, none of them said a word! Each one of us had achieved a level of zen, we took chairs, found a quiet place at the end of the trail and ordered tea. We could see mountains as far as our eyes could see, and there was fog travelling through all these mountains. Soon the fog came to us and we literally couldn't see what's there 5 steps ahead. I have never been in such a state where I just can not consume the happiness from a scenery and this was one such feeling.

I was gonna stay back for more 2-3 days with my sister, discover the city alone while all my other friends left for Ahmedabad and Mumbai. I went to more of my go-to places, Apache High Street which is a rock cafe and it has just the best playlist for any weekend! I did not want to miss High Spirits at any cost, so I dragged my sister there. It was just another busy weekend with a great band performing that day. It was just me and my sister that day drinking alone, cursing life and wishing for more such nights.