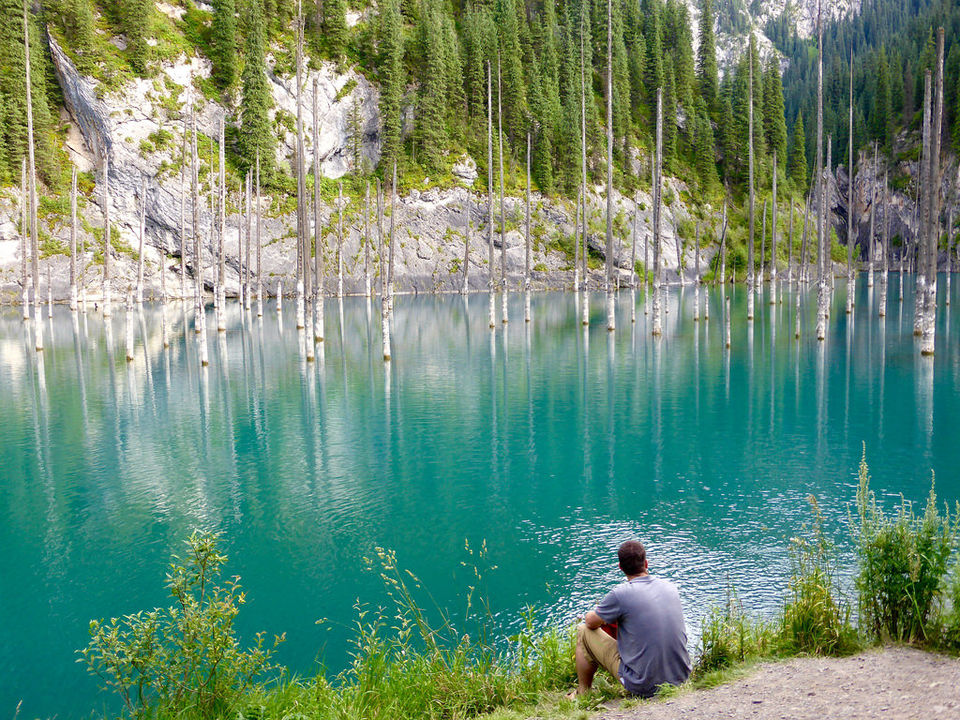 Do you remember Upside Down? The alternate world on the Netflix show Stranger Things? What if I told you that something like that exists in reality? There's a straight-out-of-a-fantasy, bizarre lake which is probably stranger than what any show ever could be.

Known as Lake Kaindy, this water body is nothing short of a natural phenomenon. On the surface it looks like an unearthly beautiful spot–with azure waters, rocky hills and tall pillars poking out of the surface. But if you dig a little deeper, you will find a whole new world under the lake's surface.

Lake Kaindy lies in Kazakhstan, barely 80 miles from the country's largest city Almaty. However it remains an unexplored area, receiving a few visitors each year. The reason probably is the difficulty in accessing this lake which generally requires driving on a dirt road in an SUV or utility vehicle. But one look at the view and you will instantly know that the effort is more than worth it.

The odd wooden pillars protruding out from the lake's surface are actually tree limbs! The rest of the parts of the trees are submerged under water, where they exist like a dense, under-water forest. This unique phenomenon is a consequence of an earthquake that occurred 1911. The quake triggered a large landslide, blocking the gorge that used to feed the area and forming a natural dam.

For nearly a century, rain filled the area and the coniferous forest that existed here got submerged under the water in this rain-fed lake. This is how Lake Kaindy was born. Since then, the tops of the trees that remained outside the water died and dried up, while the parts submerged under the water, although also dead, got preserved in their original state. The underwater trees with the protruding tops present an intriguing portrait for visitors and tourists.

The first natural question that arises on reading about trees existing underwater is that how have they not decayed? These submerged trees have resisted decomposition, their needle-shaped leaves and branches perfectly preserved, because of the temperature of the water.

Since Lake Kaindy is situated around 2,000 meters above sea level, the water is incredibly cold, so much so that it acts like a giant refrigerator for the trees. Those who enter the frigid water must don wet suits or other protective gear. Luckily, you don't need to take a dip to catch a glimpse of this marvel — part of the lake's charm is its beautiful, turquoise water that is crystal clear, giving you a view of what is below the surface while staying on the shore.

The underwater view of the trees look more like remains from a shipwreck. The sunken trees appear like large masts from lost ghost ships. Photography enthusiasts are treated to an almost surreal landscape, especially when the lake is frozen in the dead of winter . The eeriness is made all the more palpable when a light fog is cast over the water or when the trees have transitioned from navigational beacons to something for fishermen to lean on.

The spot is also open during the winter months when the water freezes over. It makes for a great spot for sledging and winter treks too. It also makes for interesting photographs with the wooden tree limbs protruding out of the snow!

Do you know of other such unique places? Share your stories on Tripoto and get millions of travellers to see them. Get travel inspiration from us daily! Save and send a message at 9599147110 on Whatsapp to start.