Tigers, Forts, Canyons, Temples And Waterfalls - This Golden Triangle Has It All 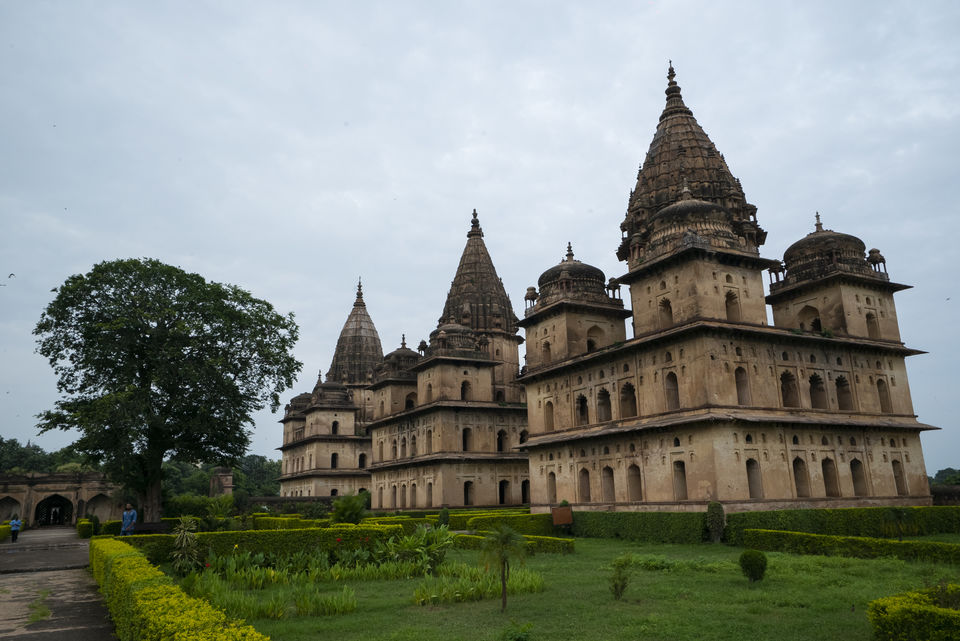 Despite occupying the centre of our country, Madhya Pradesh has never quite been at the centre of our attention. The snowy peaks of the north, the diversity of the south, the vast nothingness of the west and the virginity of the northeast all tempt us with their charms and we criminally ignore the natural, cultural and architectural gems of Madhya Pradesh. To those who want to venture into this beautiful state, I present the Golden Triangle of Madhya Pradesh. This triangle covers the whole spectrum - medieval ruins, impenetrable forts, tiger reserves, cultural gems, colourful canyons, tribal villages, roaring waterfalls and more.

The Bateshwar Temple Complex in Chambal Valley was virtually off-limits to the outside world for years due to the presence of dacoits in the surrounding rugged mountains and deciduous forests. Temples of Bateshwar, poetic stanzas of sandstone, were constructed between 8th to 10th century. The backdrop of grey hills and green forests adds a touch of surreality to the temple complex. The temples, dedicated to Shiva and Vishnu, have intricate carvings and elaborate shikharas. The carvings depict stories from Hindu mythology. Different temples are under different conditions, yet most of them have withstood the trials of time. It makes you wonder what this place would have looked like during its heyday.

Best time to visit Bateshwar Temple is after monsoon from September to March when the temperature ranges from 10 to 30 Celsius.

How to reach Bateshwar

By air: Rajmata Vijaya Raje Scindia Air Terminal in Gwalior (30km) is the nearest airport. There is one direct flight from Delhi to Gwalior every day.

By train: Nurabad (14km) is the nearest railway station from Bateshwar Temple. But, it is hard to find transportation to take you to the temple from the station. It is better to head to Gwalior Railway Station (35km) and hire a private taxi to the temple.

Where to stay near Bateshwar

Brightly painted houses, cobblestone streets, multistorey temples, an unconquered fortress and a tranquil river give Orchha a charm that is hard to escape. At the Chaturbhuj Temple, hear the unbelievable story about how the Queen of Orchha brought Lord Ram to Orchha; walk through the architectural marvel that is the Orchha Fort which was never conquered despite repeated attempts by the Mughals; cross the bridge and admire the multistorey Chhatris on the banks of Betway and pay homage to Goddess Laxmi at the marvellously built Laxminarayan Temple.

Best time to visit Orchha is after monsoon from September to March when the temperature ranges from 10 to 30 Celsius. However, if you want to see some pristine greenery then you can visit Orchha in the monsoon months of July and August as well.

How to reach Orchha

By air: Rajmata Vijaya Raje Scindia Air Terminal in Gwalior, 108km away, is the nearest airport. From there, you can hire a private taxis to reach Orchha.

By train: Jhansi Junction, 14km away, is the nearest train station with regular connections to major Indian cities. You can hire a private taxi or autos to reach Orchha. The budget-minded can opt for shared autos that run the following route train station-bus station-Orchha. Shared autos will cost you about ₹20 one-way.

By road: Jhansi, 14km away, is the nearest bus depot with regular buses to major cities of Madhya Pradesh and Uttar Pradesh.

Where to stay in Orchha

My American friend said, "Khajuraho should be one of the seven wonders of the world instead of Taj Mahal." Need I say more? I will still try. Khajuraho is 5,000 years of Hindu mythology immortalized in stone. The walls and ceilings of the temples depict countless legends, myths and stories of Hinduism. Don't make the mistake of visiting the temple complexes without a guide.

There are a whole host of places to visit around Khajuraho. Go in search of the royal Bengal tiger in Panna National Park; spot gharials (fish-eating crocodiles) in Ken Gharial Sanctuary; be awed by the multicoloured canyons at Raneh Falls and click Insta-worthy photos of the Pandav Falls.

Best time to visit Khajuraho is after monsoon from September to March when the temperature ranges from 10 to 30 Celsius. However, if you want to avoid crowds, see some pristine greenery and don't mind a fair drizzle then the monsoon months of July and August are also good.

How to reach Khajuraho

By train: There is one daily direct train from Khajuraho to New Delhi. Some of the other trains that stop at Khajuraho Train Station are Bundelkhand Express, Mahakaushal Express and Udaipur-Khajuraho Express.

By road: There is one direct bus from Khajuraho to New Delhi. For other major cities, you will first have to go to Jhansi.

Where to stay in Khajuraho

Have you visited any of the above-mentioned three sites? Do you know of a golden triangle in some other state? Write your own travelogue and share it with millions of other travellers. And subscribe to Tripoto Youtube Channel for stunning videos.