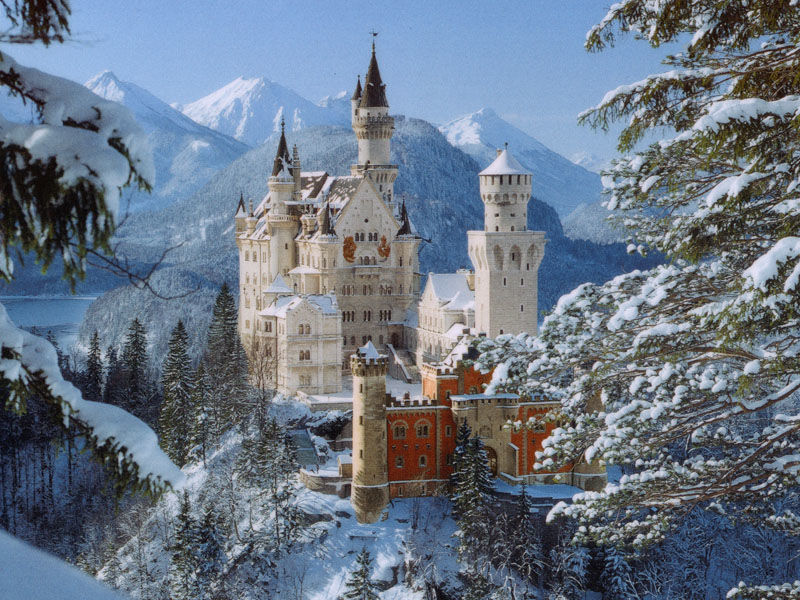 Today we move towards Munich to the south of Germany. The route left me in awe. Munich is a really beautiful city. It is elegant and stately, with a well-preserved old quarter, in which stands out the Neo-Gothic town hall of Marienplatz with its dancing sculptures. It is the neuralgic center of the town. It has nothing to do with the cosmopolitan and ultra-modern Berlin. In Munich, the Bavarians walk around in their traditional costumes without having to be festive in broad daylight.

It is time to visit the city when the most emblematic festival in Germany, the Oktoberfest, is celebrated. In addition to this, the city has several interesting attractions, including the BMW Museum. But eventually, we realize that life in Munich really revolves around beer. I will not go much into the theme because I have an exclusive Oktoberfest blog for it.

We ate in a central and famous place, on the main street, along with a beer. We order a delicious knuckle and some typical Bavarian white sausage called Weisswurst with puree. For dessert, we have an apple strudel! In the evening, we make a visit to the Hofbrauhaus, the largest brewery in Germany, founded in 1591. It is a traditional place with a history, where there is the beer of all kinds and textures.

If you order a beer (normal) they will give you a liter jug. I always asked for a "small beer", and they serve half a liter. The charming Biergarten unfolds in the parks. Ideal for the sunset, it is an impromptu outdoor beer garden where they set up beer stalls and typical food such as sausages, to enjoy at long tables with wooden benches. It serves as an excuse to engage in conversation with the locals. They are all over Germany. And, to finish, we travel by train to Dachau, the one that was the first Nazi concentration camp, preserved as a Memorial.

To say goodbye to the Bavarian capital, we have one last walk and a refreshing beer in a Biergarten.

We rented a car and set off to the south of Bavaria on the edge of the Alps, very close to the Austrian border. Leaving the Bavarian capital and leaving behind the busy highway, the real Germany begins. It gets green and greener. There are meadows with cows and horses, farms where they sell milk and fresh cheese, and continental forests. Our goal is the so-called Castles of the Mad King, built by Ludwig II of Bavaria, next to the beautiful village of Fussen, in a dream landscape. It is perched on a cliff in the foothills of the mountain, between forests and waterfalls and at the foot of a glacial lake.

The visit to the castle of the father, Schloss Hohenschwangau, and then to that of Louis II takes a whole day. For the ticket, fortunately, we only wait fifteen minutes in line. Both are spectacular, but it is Neuschwanstein that takes the cake. Inspired by Wagner's romantic operas, it recreates in a fantasy world of medieval legends, with rooms covered in tapestries painted with princesses and nymphs of story, typical of the romantic era. It inspired none other than Walt Disney to create the castle of the Sleeping Beauty.

Late in the afternoon, we took a walk through Fussen, a town as beautiful as it is quiet. On a terrace, we had a beer and a salad, before going to rest from the long day. As for accommodation, we booked in Hohenschwangau itself, at the foot of Neuschwanstein, a village ski resort with only hotels and shops. From the balcony of the room, we slept with the glare of the lights of the solitary castle shrouded in fog.

We said goodbye to a Neuschwanstein wrapped in the mist in the morning to get to Lake Constance. But first, we decided to stop at the university city of Ulm to see its famous cathedral. Its tower is presumed to be the highest in the world, rising 167 meters above ground level. We go up and I can only say it is not suitable for those who suffer vertigo! In Ulm, we have snacks and go towards Lake Constance.

Known as the Bodensee, this huge lake, besides being the largest in Western Europe, borders Germany, Switzerland, and Austria. We glimpse the blue in the distance. Bodensee, more than a lake, looks like a small sea from the south, whose cities look splendid on its shores. There are stately and ancient cities, bustling and happy.

We arrive at Lindau. After a splendid time, we went through its cobbled streets of houses with a colorful facade, elegant and flowered. We bought bread, sausage, and fruit and had a very pleasant lunch in a park on the edge of the lake, with the background noise of the jingling of beer steins in the Biergarten. After lunch, we went to Meersburg, an adjoining city and as beautiful as the previous one. There are cobblestone streets, toy houses and a stone castle with a drawbridge just like in the movies.

In Meersburg, we had enough problems to find accommodation. It was a very touristy place! Luckily we found a little hotel on the outskirts that just had just one room. It was a little out of our budget, but there was no other! After this trance, we toured the charming city and even took a refreshing swim in an area of the lake, taking advantage of the pleasant ambient temperature of about 20 degrees. To end a perfect day at the Bodensee, we enjoyed a beautiful sunset on the pier.

The day dawned as sunny as the previous one and we had a quick breakfast with the idea of arriving that same day in the Black Forest. But first, we take a small detour to neighboring Switzerland and stop in the medieval city of Schaffhausen. Here the Rhine passes with all its power and plummets vertiginously and noisily into spectacular waterfalls.

We descent a hundred steps with incredible views of the water, where it is almost impossible to stop getting wet. In Schaffhausen, we took a walk and have a coffee that was costly. We ran back to the "affordable" Germany. An hour later we finally arrived at the Black Forest, named after the Romans because of the dark and impenetrable wooded thicket that perches on the slopes of the mountains.

It is a place of legends of fairies, elves and naughty goblins who go out to wander through the forest on full moon nights. The entrance to this vast extension from the south is through Titisee, a small town with a beautiful lake of the same name.

We found accommodation in a Gasthaus. The owners, who did not speak a dash of English, offered us a spacious room with terrace and bathroom including breakfast. We have lunch in the sun on a terrace full of German tourists. We order goulash with meat and beer. For dessert, we have coffee and tart from the Black Forest, made with cherries and chocolate. It is a delight for the sweet tooth! That night a tremendous storm fell, reminding us the arrival of autumn.