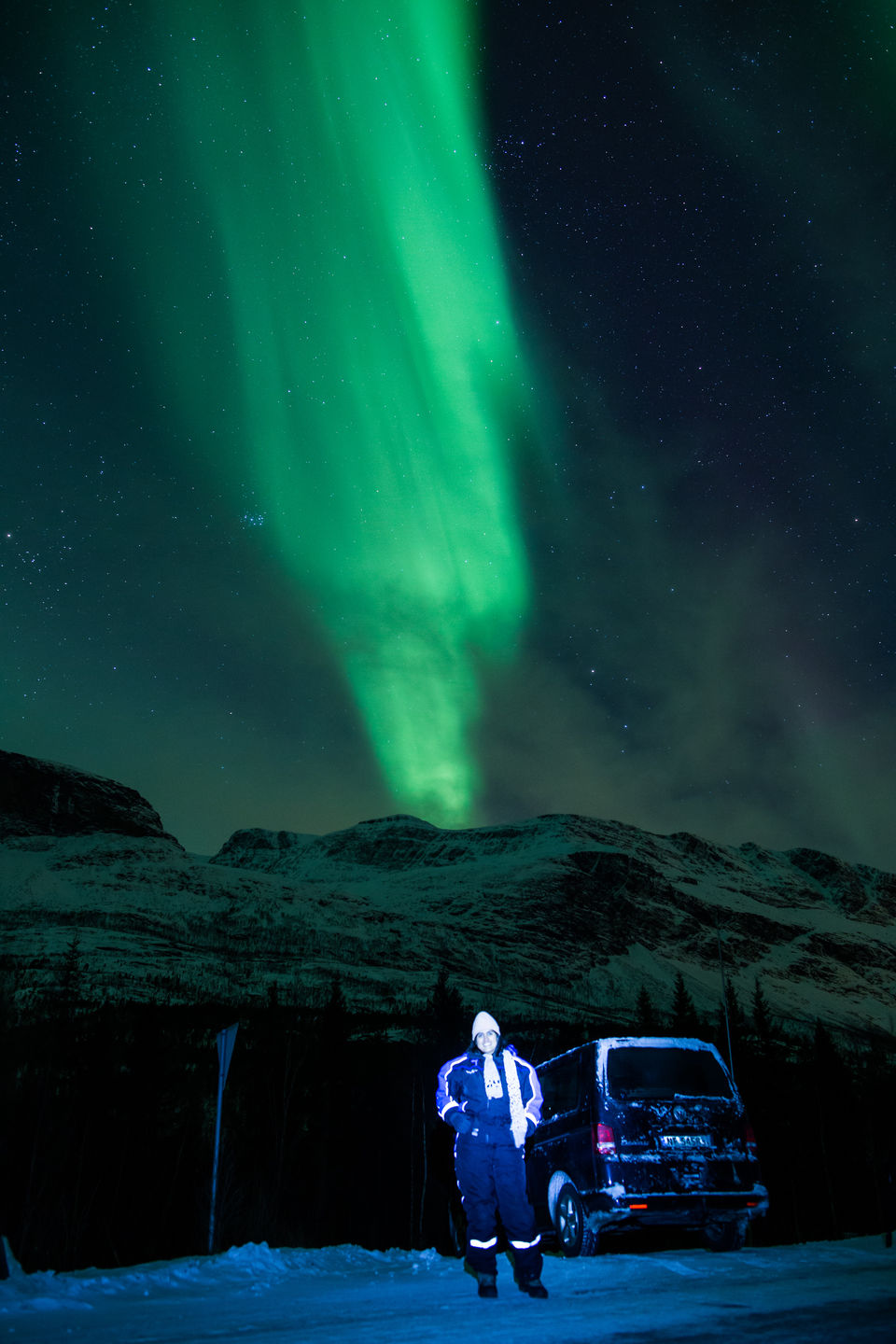 I don’t exactly remember when I first heard about Aurora Borealis or Northern Lights.. but when I did.. I genuinely thought its stuff of those Discovery or Nat Geo guys and not meant for normal people like us..

Nor I remember, in what state of mind I announced that I will travel alone to Norway, just to experience ..this.. and under what confidence ..my husband took me so seriously that he went on booking return flight tickets for me Mumbai-Oslo-Mumbai ..! Perticularly when he knew that I still cannot walk from ‘Dandekar Pool to ‘Navashya Maruti' without calling him twice for directions.. .. :)

He booked tickets.. planned my itinerary ..while I applied for Visa and got it.. We booked hotels & combed through Trip adviser for every bit of information available.

On day of my departure.. I was only 'little excited' about backpacking alone in Scandinavia..and 'hell lot of scared' about exactly the same .

Throughout my journey from Mumbai to Oslo and Oslo to Tromso... one nasty thought kept eating out my brain.. That ‘What if those lights refuse to show up in my visit..?’

Same thought was scratching my head when I sat nervously in my hotel lobby waiting for my northern light tour pick up..

It was around 5 o' clock in evening.. I mean evening is just to say ..I was standing in middle of 6 week long ‘Polar Night’ in Tromso, which lasts from 27 Nov to 15 Jan - where the town doesn’t even get glimpse of Sun.. only little bit of twilight, that too 3-4 hours a day. So technically it was midnight..!!

It was snowing heavily since last half an hour and outside streets were covered with fresh... crisp white snow..

'Tromso - The Arctic Capital' is small town with mere 60000 population.. However except one-The receptionist sitting in front of me, I was wondering where rest 59999 have vanished.. there was absolutely no sign of life on streets..! After some time one black Mercedes appeared in view; maneuvering swiftly through snow & stopped in front of my hotel. One tall, white, handsome guy came out inquiring about me.. it was Ǿystein, Our tour guide for tonight J

In car I was almost shocked to find one Indian couple.. we Indians are literally everywhere.. I mean was it necessary for me to find one couple from Ghatkopar…right there at northern tip of earth..? But it did help to ease out both my fear and ego.. that 'I am not the only one' J .. We had one more companion.. A Italian guy who left his girlfriend sleeping in hotel..& came alone on this excursion..!! (this man had guts J)

So we four and Ǿystein embarked on this adventure of chasing lights.. or as Ǿystein explained lights are generally always there what we chase is clear skies..!!

As we drove over Tromso Bridge..he started explaining about science behind northern lights..

As Tromso is small Island, it have a coastal climate & hence almost always cloudy..However in north, places near water are warmer due to gulf streams..hence present livable conditions (temp around 0 to -5 deg C) Now because we were chasing clear skies.. we will have to leave this 'Comfort Zone' & drive more inland..At this latitude.. as we kept driving inland temperature kept dropping steadily.. Here inlands are rarely inhabited.. town we were driving through had record breaking two digit population 82 !!!

When we were trying to gulp this information..our car stopped suddenly.. Ǿystein noticed very small activity in sky and we jumped out with our cameras..and this was the very first view we got..

But we decided to drive further..away from town .. away from city lights. We kept driving for may be another hour through pitch dark night in subzero temperature.. and we were about to cross Finland border..when we all four screamed with joy..and Ǿystein stopped car with jerk...There they were..dancing all over the sky..!!!

We were all bursting with joy.. screaming.. trying to take pictures..and feeling absolutely lucky..

Yes.. sky filled with lights ..Above Norway-Finland border.. It was a photo opportunity not to be missed..

We were thrilled happy and almost Frozen..and Ǿystein had two options for us first to start driving back home or second to drive further till Sweden border..Just to have thrill of visiting 3 countries in one night..!!! Though cold has reached deeper from flesh to bones..we decided to drive further..

When we reached Sweden border, temperature indicator in car has reached to -28.8deg C.

I was literally scared to step out of car in that cold.. I have already stopped filling my fingers..

Ǿystein gave us some preliminary instructions..like not to breath too deep..keep moving every part of body..and some how we dared to step out..within instant, I got totally numb..I was so numb that I dropped my DSLR face down sorry lens down in snow..& i didn't even open my mouth to scream. not even in impulse J

I stood there for minute or two.. by now I stopped feeling my nose...ears.. I looked up..It was carbon black dark night..no moon..and sky was filled with countless stars.. In my life I have never seen a night like that.. I never knew this universe have that many stars.. some how it felt like we all got dissolved in that darkness.. we became part of that Vast.. Dark .. Nothingness.. & million stars glittered through us..!!!

All were speechless, as we started our journey back home..

May be hour later car stopped again.. there was another drama happening in sky..

We stopped in plain ..surrounded by mountains..and those lights also in circle surrounding us..now this couldn't have got better than this.. then this circle deformed and formed one fluttering ribbon in sky..it kept winding and unwinding.. I even forgot to keep clicking.. It was Ǿystein who was doing this job :)

He also prepared one awesome cup of Hot Chocolate for us..!!

A cup of hot chocolate in that freaking freezing cold.. and miracle of nature unfolding overhead..

I cant exactly put this in words.. but when I see such beautiful 'A Creation', it increases my curiosity about 'Creator'

Is some one sitting up there making this happen..?

and on top of it

This blog was originally published on