My Trip During Valentine's Day in New York in February 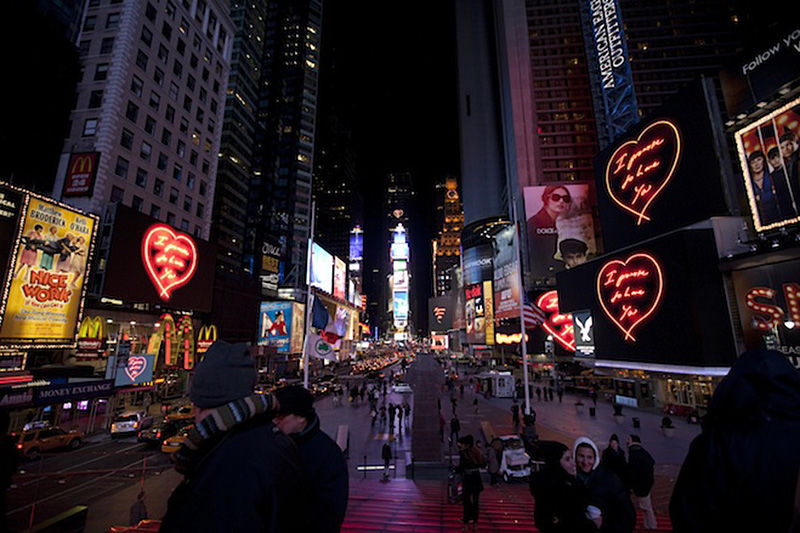 What category of lover are you part of? Are you pro Valentine or the anti Valentine? On February 14, Valentine's Day is today a controversial party, which is sometimes even banned in American schools. However, it is a fact that love is on the air here in New York during these days.

There are shelves bursting with items dedicated to lovers, packages of chocolates in the form of hearts of all dimensions, teddy bears with hearts, and puppies with hearts! With all these sweets and romanticism the risk of suffering from diabetes becomes inevitable.

We left at 6 o'clock in the morning by taxi to the airport and walked to take the connecting train to the T3. We headed to the boarding gate and there we had to answer some questions from the airlines staff and at 9:50 we embarked for NYC.

We arrive in NYC at 6:30, pass the controls and take the bus to Manhattan to arrive at the hotel about 8:00 pm. We decided to go by bus because it was the cheapest. We rested for a while at the hotel. The hotel was very good in a perfect location between the 45th and Madison. We are away from the bustle of Times Square, and the corresponding metro stop is the Grand Central.

The room was quite warm but the bed was very comfortable, perfect to rest after a day of walking. There is no minibar which is not much missed either. The hall and bar were very good, and the staff very friendly. We were given the room on the top floor, with a view of the skyscrapers.

Finally we leave for the big apple heading to Madison Square Garden because the day before we had bought tickets to see the NBA match. We went walking through midtown, and entered Grand Central. We went through the library, and the Empire State.

We went to see the Chrysler Building on the outside. We ate a slice of pizza on 43rd Street. We passed through Madison Park, Flatiron, followed by Broadway and arrived at Union Square. As we were confused we turned around and took 34th street where the stadium was in front of the Pennsylvania hotel.

There were a lot of people. We arrived half an hour early and we looked for our place and to wait to see the previous one. There we ate a hotdog and coke and watched as people stuff themselves with food during the game.

We walked back through Times Square to continue taking pictures. Despite being 10 at night the lights illuminated everything and seemed daytime and was full of people and open shops. We went to the hotel to rest after a long day.

We woke up at 6 in the morning but we did not leave the hotel until 8. We prepared the day's excursion and decided to start in Downtown, the area of ​​wall street and the Statue of Liberty. We went out and went to breakfast at a cafe that is in front of the hotel. We have a chocolate, a bagel (typical New York rolls) with cream cheese and a yogurt with fruit.

With a full body we went to the Grand Central station (impressive station), to the subway. There we realized something was happening, and that it was the Valentine's Day! From the first hour we saw young people and more couples heading to downtown, and we went with the flow.

First we took a metro card. We got off at the Brooklyn Bridge stop and to our surprise the streets were cut off! Logically, there were lots of lovers. So we took a walk through the area to go down to battery park. We wander around and see the crowd that stood in front of the fences. We take a seat and watch the lovebirds.

Since we could not go where we wanted, we were walking according to where they let us go. Everything was very interesting to see all the people excited and a few waiting for their partners. We took advantage of the fact that the current let us go to visit Ground Zero.

We went along the Wall street and ate at the Mcdonalds which is supposed to be more luxurious, but it's normal. We went to the Staten island ferry to see the statue of liberty from afar. In the afternoon we took the subway to the meatpacking area. We decided to go to SoHo. We walk and have a coffee. We visited many stores. We continue to little italy and then chinatown.

We walked to the Dakota building passing by Lincoln Center, where the opera is and that week was held the New York Fashion Week in that area. It started to snow slightly at 5 o'clock and we went to the Magnolia Bakery to eat some muffins.

We reach Times Square which on Valentine's Day has become a spectacle of hearts. We see couples renewing vows and lots of kisses getting exchanged. We walk to find the restaurant we had booked that day for dinner. In front was the chelsea market! The pizzas were huge but they did not seem like much. We have au poivre and the pappardelle.

After dinner we walked to 18th Street subway to Grand Central. We continue towards the top of the rock to go up and see Manhatan at night.