San Francisco’s true heart, bones and spirit are her writers. From Jack Kerouac and the Beats of North Beach, to modern superstars like Dave Eggers, Amy Tan and Rebecca Solnit, this city houses a number of bookish folk who have profoundly changed American culture. Because of the richness, beauty and diversity of the landscape it’s no wonder the San Francisco’s Bay Area is home to Poet Laureates, Pulitzer Prize winning authors and the most eclectic writers of our time.

Author Amy Tan, though originally from Oaktown, has many of her works set in San Francisco’s Chinatown district including critically acclaimed novel The Joy Luck Club(which was later adapted into a film). It was the formation of the People’s Republic of China in 1949, coupled with corruption and political unrest that forced many Chinese from their homeland to this very spot. Over the decades, “Little Shanghai” grew, families thrived and traditions were preserved complete with religious temples, specialized markets, fortune cookie factories, and, of course, Chinese restaurants.

For many, when you think of San Francisco, peace, love and the summer of ‘69 will waft through your brain like a patchouli cloud. But prior to that era was even more influential to the Bay Area’s literary scene and, of course, the hippie counterculture. Meet “the Beats” of North Beach: A movement also known as the San Francisco Renaissance. The original “Beat Generation” gang included Allen Ginsberg, William S. Burroughs and Jack Kerouac who found each other in New York, but later made their exodus west to San Francisco. This skeleton crew of bohemians grew into an iconic movement called The Beat Generation, the term first used by Jack Kerouac in 1948.

Rest your bohemian bones at Hotel Boheme located right on Columbus. Hotel Boheme not only offers the bohemian experience similar to a Parisian hotel, but also celebrates the literary roots of this North Beach neighborhood.

To begin your journey, enter through the ornate Chinatown Gate on Grant Ave at Bush St. A gift from the Republic of China in 1970 as a symbol of good faith between the countries, the bright colored pagoda topped doorway is like a portal into a tiny universe of bustling tourists and locals shopping for everything from live chickens to jade statues. Peruse in the many shops and wares on Grant Street just as it was decades ago. Chinese slippers, good luck charms, and mechanical trinkets are just a few of the items you’ll see by the basketful. So don’t be surprised to find a ribbon-adorned phallus in one of the storefront windows. 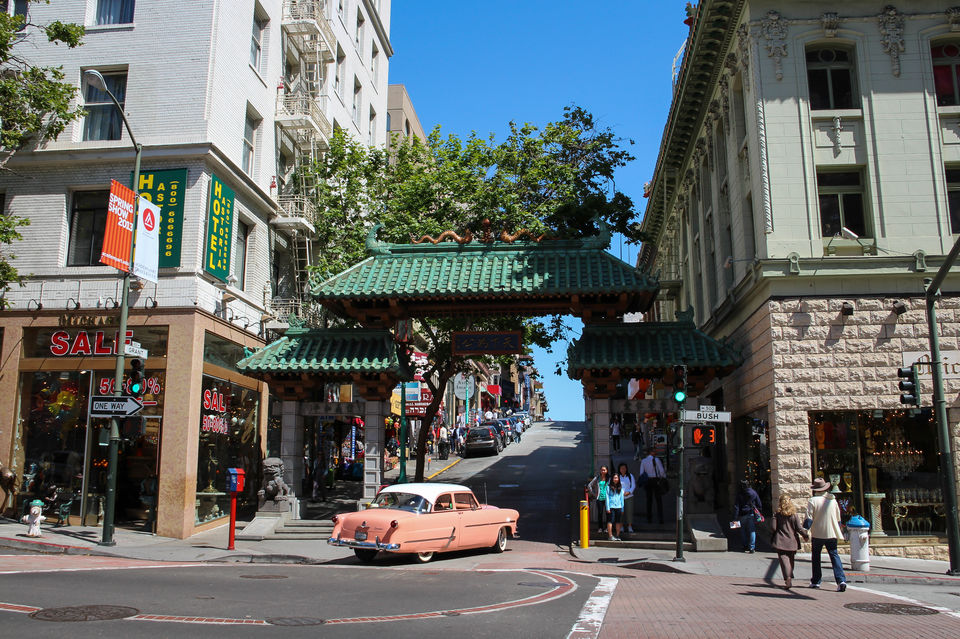 To learn more about Ms. Tan’s culture and Chinese heritage, head to the Chinese Historical Society of America located in San Francisco’s original YWCA building. If you are interested in the Chinese American experience, this museum not only offers a historical perspective, but also some interesting modern art. 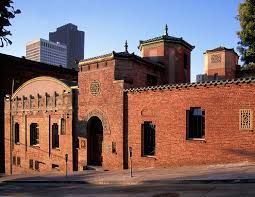 For a yummy lunch and the best dim sum in town try Great Eastern Restaurant on Jackson Street between Wentworth Pl and Cooper Alley, an authentic experience complete with white tablecloths and aquariums of live delicacies. There’s usually a decent wait time but the food is well worth it. Highlights are shrimp dumplings (har gow), pork dumplings (shumai) and lava buns. If you miss out on the dim sum, Peking duck satisfies every time. After lunch, mosey over to the Golden Gate Fortune Cookie Factory at Ross Alley at Jackson St. The ‘non-Chinese’ origin of these cookies is comically illustrated in The Joy Luck Club when Lindo Jong finds a job at a fortune cookie factory in Chinatown. After a few attempts at translating the fortunes in Chinese, she realizes the cookies contain “bad instruction” rather than good sense. Observe how cookies are made and purchase them fresh—they even have more racy fortunes. Or try the egg tarts and lotus pancakes. 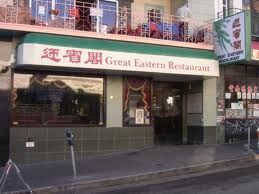 Take the Mason line of the cable car north to Columbus Ave. then travel south along Columbus Ave, past the slew of alfresco cafes and turn left on Kearny to the newly erected The Beat Museum. This tiny space packs a punch with carefully selected collection including Ferlinghetti paintings, Allen Ginsberg’s typewriter and first edition prints of Jack Kerouac’s On the Road. The museum also sells books, memorabilia and hosts special events like book signings, readings and lectures. Need to replace your college copy of Kerouac or Kesey? Turn right onto Columbus Ave until you reach City Lights Bookstore. Founded in 1953 by Lawrence Ferlinghetti, it is the quintessential Beat headquarters complete with publishing house for fringe writers and dharma bums (Alan Ginsberg’s Howl was published here). From existentialists to modernists, you can almost smell the clove cigarettes in a cloud of black turtlenecks like ghosts amongst the towers of books on the second floor of this Beat Poet’s paradise. They also sell journals so you too can create your own literary masterpiece. 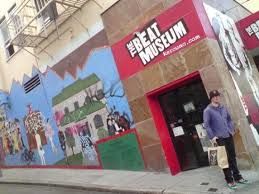 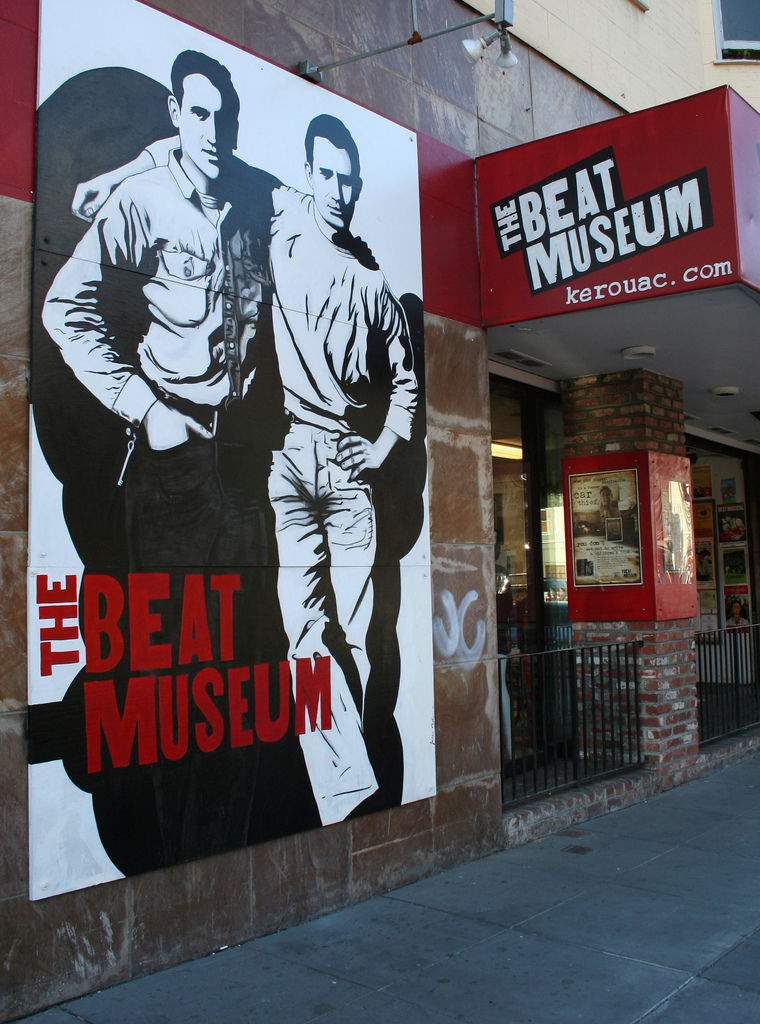 Newly inspired to write the great American novel? Then grab a table and an espresso at the original Caffé Trieste (from City Lights walk north to Vallejo and turn right). Opened in 1956 by Giovanni Giotta, this Beat haunt has housed many a writer including Ferlinghetti, Kerouac, Ginsberg, Hirschman (Poet Laureate of San Francisco) and a young Francis Ford Coppola who wrote the screenplay to the Godfather here. Admire the archive of black and white photos on the wall or stay for the Caffe Trieste Saturday Concert series, the longest running show in SF since 1971. 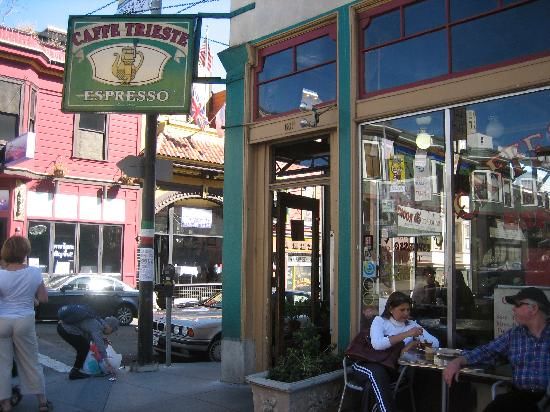 After dark, North Beach is the place to be. Located at the corner of Columbus Ave and Jack Kerouac Alley (check out the murals newly painted to honor Mr. Kerouac) is considered the epicenter of Beat locales: Vesuvio’s Bar. Like the volcano Mt. Vesuvius, this little pub erupted the Beat world on October, 1955 when Neal Cassady (a.k.a. Dean Moriarity of On The Road fame) decided to grab a drink before heading to a poetry reading. This is also where the beatnik look became infamous due to Wally Hedrick who sat in the window dressed in full beat regalia: beard, turtleneck, and sandals, creating improvisational drawings and paintings. Today Vesuvio’s has a great collection of Beat memorabilia as well as serving one potent cocktail. 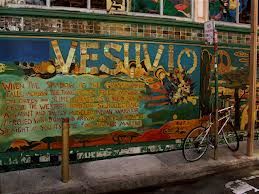 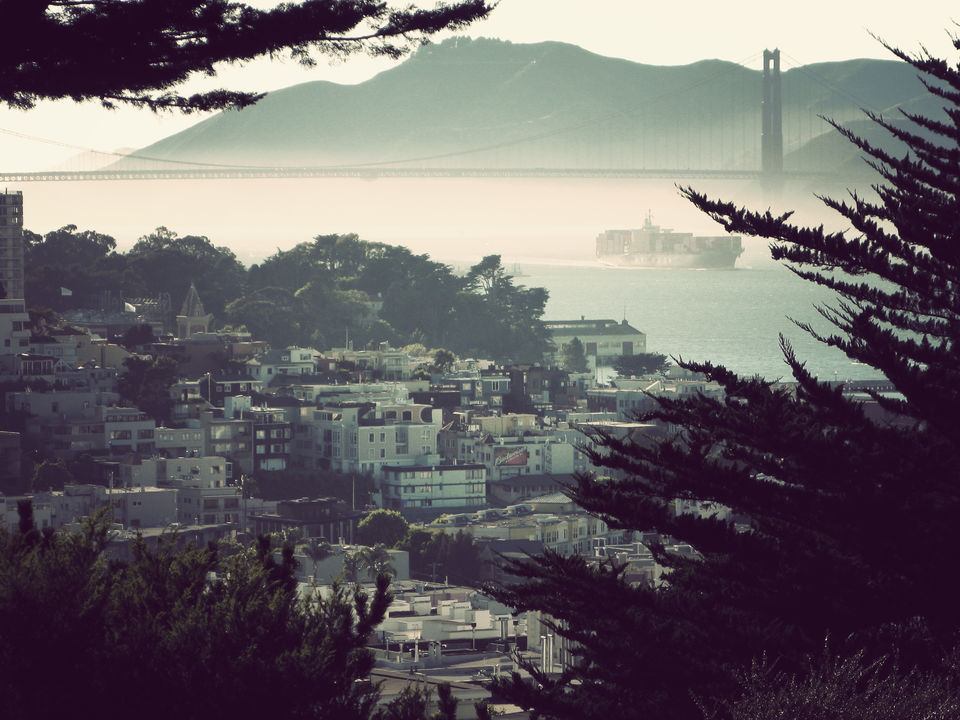