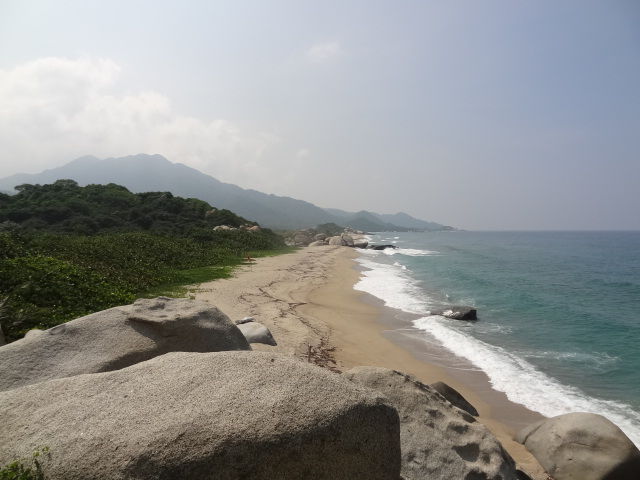 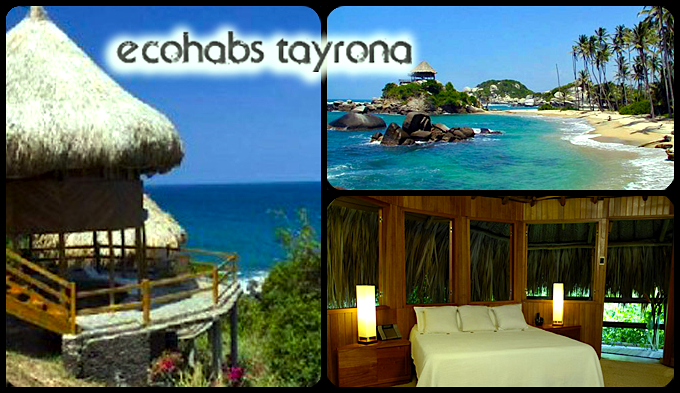 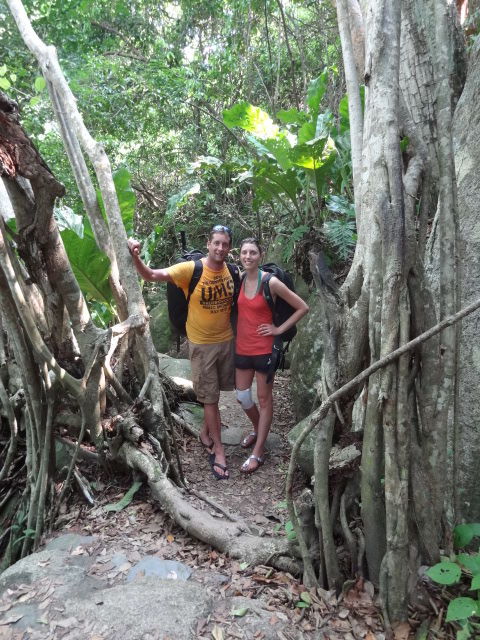 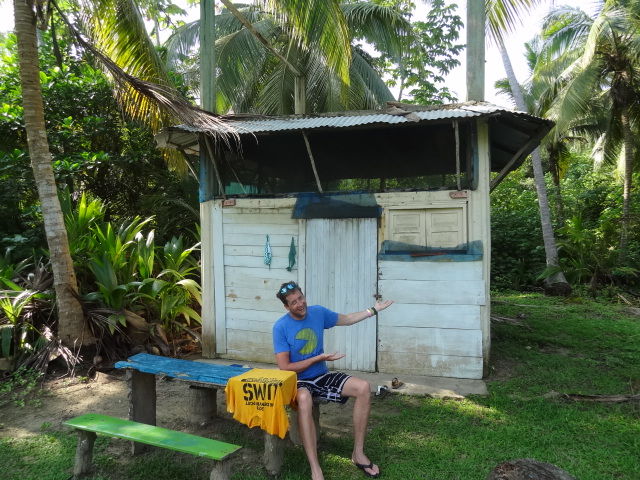 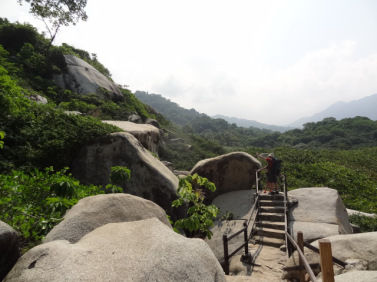 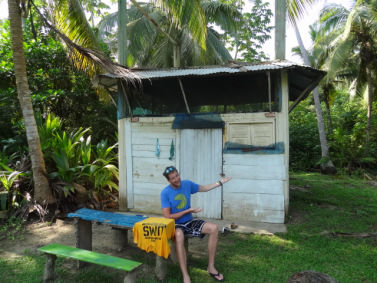 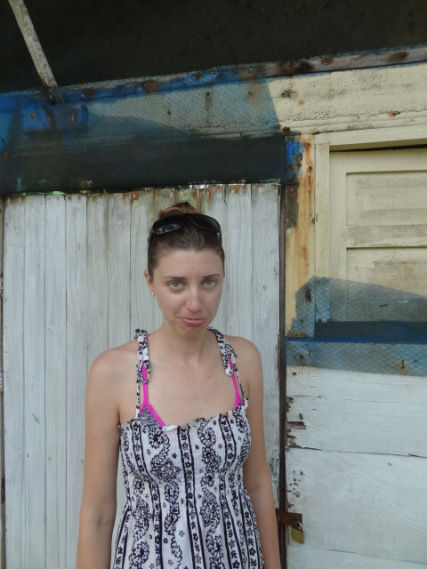 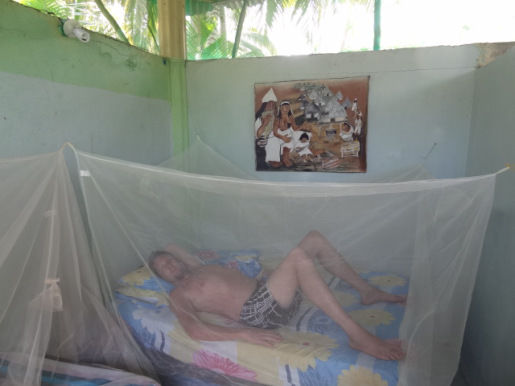 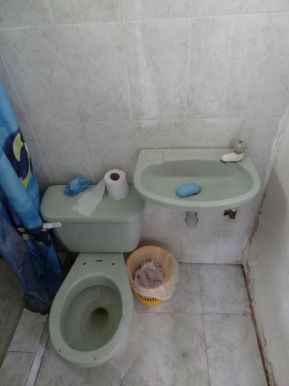 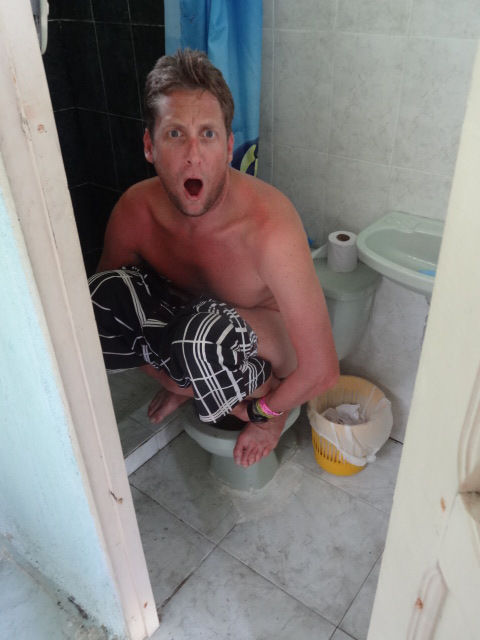 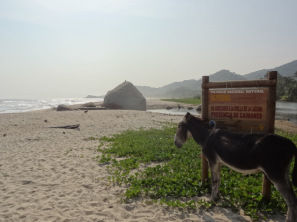 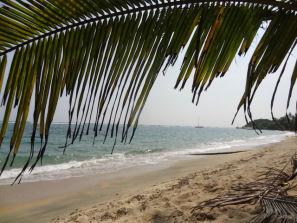 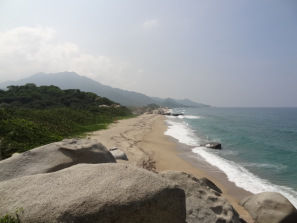 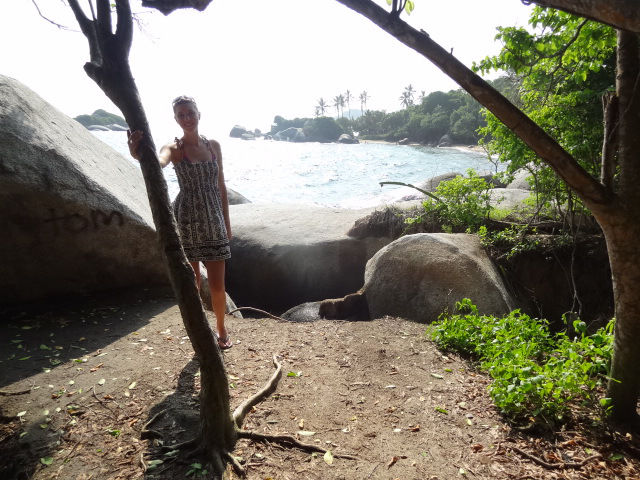 I should have trusted my gut. While reading about Tayrona National Park in Lonely Planet and online, I thought it looked beautiful but sounded like a huge pain in the ass. We had pretty much written off going there, but some Danish asshole guy in Palomino convinced us it was absolutely worth it. The highlight of his three month stay in Colombia. So we left our quiet little hideout at La Sirena and hailed a bus to Tayrona.

At the entrance, a heavily armed policeman will thoroughly search your bags before you head to the ticket office to pay your large entrance fee. Meanwhile, you see poor chumps on their way out of the park waiting around to get the knife they had confiscated back. Fat chance. After security, you can then choose to walk an hour to any sort of trailhead or pay for yet another minibus, which we did since I wanted to save my knee for the actual hike.

The park is spread out on a section of gorgeous coastline/jungle and there are several different areas you can hike into that have accommodations from camping, to hammocks for rent for the night, to cabins/cabanas, to shared rooms, etc. The nicest and most well-known place to stay are the Ecohabs, dispersed on a cliff overlooking the ocean. They are WAY overpriced though — like $300+ a night — for a classy bungalow… but wait they offer L’OCCITANE bath products and DirecTV? In the jungle. “Eco” my ass; running DirecTV off a generator is not eco-friendly. However, since this is our honeymoon, I kinda wanted to stay here. Call me spoiled. Whatever, I usually don’t demand much.

Before the wedding Jeff and I had many tasks that we divvied up – one of his was to book an EcoHab because I read they book fast. I put sticky notes on his computer: “BOOK AN ECOHAB,” nagged asked him about it daily. But did he do it? Nope. Why didn’t I just do it? Principle. So, rather than hike all the way in there to be turned around, we decided to go to the Arricifes area instead — about an hour walk from the trailhead.

We hiked to the Arrecifes section of the park hoping to get a basic cabana. We plunked our bags down and took a breather when we reached the first of the Arrecifes accommodations. Mind you, this is the hardest hike I’ve done since my knee injury in April 2012 and I just had knee surgery in June 2013. Plus I was carrying my backpack (admittedly, Jeff had most of my stuff in his) and it was a hot, STEEP and steamy jungle trail. So, I’m pretty spent and a little cranky at the end and just want to find a basic but clean cabana to rest in. Jeff sets off to assess the options and leaves me to watch the bags. (This is our kind of our SOP when backpacking and usually works well.)

Maybe it’s the simple fact that we’re in Colombia; a country with a reputation for being dangerous and violent, but after he was gone more than an hour I started to panic. Before he left, I heard him ask a park ranger (policeman armed with semi-automatic weapon) how far away each place was: “cinco munutos, diez minutos,” etc.) All three places were within mere minutos! And all he had to do was go to each, ask if they had vacancy and take a look at their accommodation. This is where paranoia sets in and I’m stuck with two huge backpacks that I cannot carry alone, otherwise maybe I’d go look for him. Instead, I stewed and let my mind run in a million directions. I’m really good at this: “Maybe he got bitten by one of the poisonous snakes, maybe some guys jumped him, maybe he got lost in the jungle, maybe he decided this was the best place to ditch marriage and disappear without a trace??” J/K on that last one…kind of. After I got myself worked up into crazytown, I approached the desk of the nearby juice stand and asked “Habla Ingels?” THANK GOD one girl did. I told her the story, she told me to wait twenty minutes and if he wasn’t back we could talk to that scary looking policeman over there. I did not feel better. After maybe 15 minutes, I saw a western looking couple approaching from the direction that Jeff had gone. I asked them if they spoke English (yes, they were British) and then asked if they’d seen a really tall guy with light brown hair wearing a yellow shirt. They hemmed and hawed and couldn’t be sure, then changed the subject and started asking ME all these questions about hostels. Can’t you see I’m in distress people?! Then, by the graces of god, a tall man in a yellow shirt appears in the distance and I started crying. In my defense, I was PMSing, and had fully realized that I was alone in the jungle with no money or phone, can’t speak much Spanish, etc, etc. Anyway, I found my husband. HOORAY! He was relieved that I was crying and not pissed at him for being gone so long. Men. I don’t get them. Turns out he was just searching thoroughly and desperately to find a place that would be fit for me on our honeymoon. That guy.

Well, he didn’t find such a place. Our “cabana” for the night is one of the worst places I’ve ever stayed and that’s saying a lot because Indonesia and Vanuatu set the bar low in quite a few instances. Granted, it was our honeymoon and I wanted something special, otherwise it wouldn’t have really been so bad. And that’s what takes us to the lost dreams part.

Yes, Tayrona is beautiful. The snowcapped Sierra Nevada mountains in the distance give way to lush jungle that’s home to many endangered species (that most park-goers will never see), rocky cliffs and stretches of bouldered white sand beaches and turquoise, raging waters. It’s dramatic. But here’s my shortlist of why I couldn’t wait to get out of there the next day (well, after one last swim at one of the calmer beaches):