Jeff and I splurged on a pretty nice boutique hotel, Casa Claver, within the walled colonial city of Cartagena, which is on the Caribbean coast of Colombia. If you know us, we usually stay in crappy quaint hostels or homestay type places — that is how we afford to travel. Since it’s our honeymoon, we figured we’d step it up. We booked their smallest room, but upon arrival were told (in Spanish) that we were upgraded to a two bedroom/two bath suite with a full kitchen and living room too. 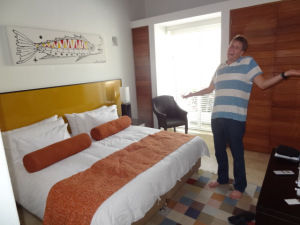 We arrived in this colorful and vibrant city and though exhausted from all the festivities and travel, we pulled it together and went exploring. The narrow, winding streets that eventually take you to a dead end at the old fortress walls remind me a bit of the confusing lanes in Venice. We stopped for an afternoon snack of a ceviche sampler, plantain and manioc chips + guac, and crispy fish bites in a lovely cafe. Afterward I swore I could navigate us back to the hotel. Jeff played along all the while smirking at my utter lack of direction. We walked in a big circle and ended up back at the cafe. I blame in on the jet lag… Wait, we’re only an hour ahead of Colorado? OK, I blame it on the wedding hangover. 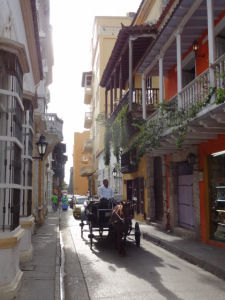 The previous night we ate at La Cevichera and had the best paella and ceviche I’ve ever had. I was pretty stoked because I think it’s the first restaurant I’ve been to that has been featured on Anthony Bourdain’s show, No Reservations.

Three nights in Cartagena was not enough. On our last night, it was as if the city queued a movie-worthy rainstorm as we walked the cobblestones streets in search of dinner. The streets quickly emptied, but all the café doors still stood open and restaurateurs huddled under their overhangs offering us shelter from the rain and a tasty meal to boot. The rain stifled the sounds of the vibrant latino beats that usually echo through the narrow streets. My flowy dress clung to my wet skin as I snuggled in close to Jeff under our umbrella. (Whoa, got carried away there, maybe I should write a romance novel?) We ended in a tiny Italian eatery and had made-to-order ceviche and seafood drowning in risotto. They don’t make wine in Colombia, so only the best restaurants in the big cities offer a nice wine list. Alas, we settled for a bottle of Barefoot pinot grigio. We left our paradise in Cartagena and headed north toward the superb beaches on the Caribbean Coast. Unfortunately, we ended up in they tiny village of Palomino after dark. Never good for an unfamiliar and rural place. As soon as we got off the bus, several young local men approached us on their motorbikes offering to take us to our accommodation. I am extremely scared of being on a motorbike since my crash in Indonesia. I loathe them. They insisted that La Sirena was quite far and down a dark footpath, so I sucked it up… Jeff told my driver to be very careful and go slow because I was scared. So he got on the back of one and I on another. They usually put your backpack between the two of you and the driver or rest it on the handlebars sort of between their legs in case you’re wondering. My driver was very gentle and I’m so glad we went with them, because even though they were leading us down a dark, unknown, dangerous pathway to god knows where, I think it would have been scarier walking there by ourselves. We arrived safely and to warm welcomes from Carolina, the “manager and cook” and to travelers who were congregated in the outdoor eating area. Lorenz and Yuan from Luxemborg and France, respectively, and Julie from Germany. 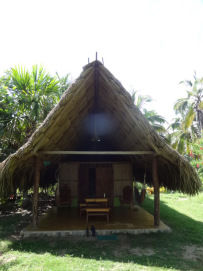 We spent two nights at La Sirena and enjoyed just chilling out on the beach, drinking beers and talking to other travelers. A long walk down the beach took us to where a wide river meets the ocean – a unique site to see and good place to swim. La Sirena is one of the nicer places to stay along the beach in Palomino. It’s still overpriced. A private cabana is very simple: open air ceiling, a bed with a mosquito net, a fan, an outdoor bathroom, and a couple hammocks on the front porch. Clean and nice though. All the beach accommodations also offer covered hammocks to sleep in with mosquito nets for pretty cheap. If you pay for a cabin, the price includes breakfast and dinner and it’s worth it to take the 15-minute walk into the village for a cheap lunch, rather than pay for it at one of the other places down the beach. A short walk down the beach from La Sirena and you’ll find hostels that offer bunk rooms and have lively beachside bars. The guide books are right; the sea is mostly too rough to swim in. 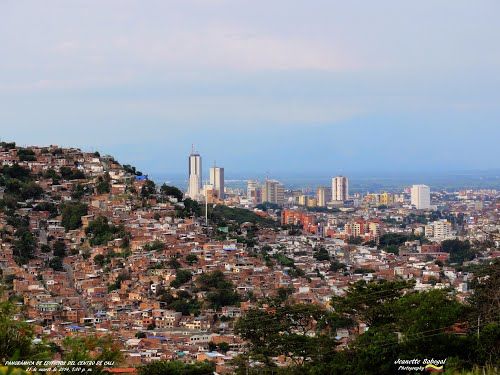 The park is spread out on a section of gorgeous coastline/jungle and there are several different areas you can hike into that have accommodations from camping, to hammocks for rent for the night, to cabins/cabanas, to shared rooms, etc. The nicest and most well-known place to stay are the Ecohabs, dispersed on a cliff overlooking the ocean. They are WAY overpriced though — like $300+ a night — for a classy bungalow… but wait they offer L’OCCITANE bath products and DirecTV? In the jungle. “Eco” my ass; running DirecTV off a generator is not eco-friendly. However, since this is our honeymoon, I kinda wanted to stay here. Call me spoiled. Whatever, I usually don’t demand much. We hiked to the Arrecifes section of the park hoping to get a basic cabana. We plunked our bags down and took a breather when we reached the first of the Arrecifes accommodations. Mind you, this is the hardest hike I’ve done since my knee injury in April 2012 and I just had knee surgery in June 2013. 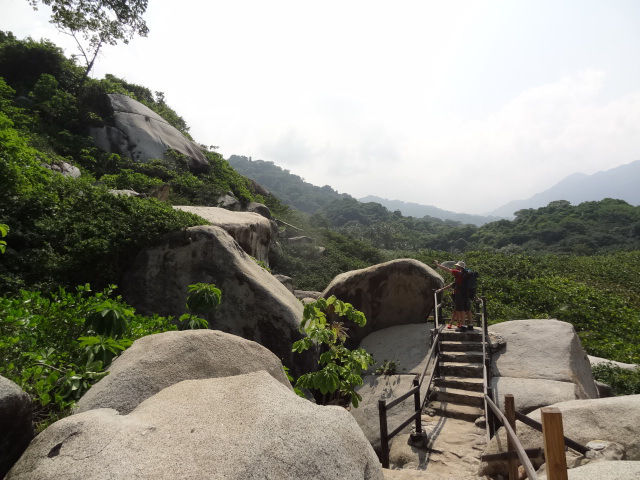 After a less than perfect night in Tayrona National Park (it’s all funny now), we migrated maybe five miles North to a “hotel” called Barlovento. We heard about it from another traveler and figured it was worth a shot — we still had another couple days before our flight to Bogota. When we arrived, we were kind of kicking ourselves for not having gone there earlier. Thankfully they had a vacancy when we just showed up at their four-room hotel. This place was built about 40 years ago as someone’s dream vacation home and was a private (yet mostly unused) residence for most of the time. It recently was opened to the public as a hotel. It’s not easy to find or well publicized, but worth seeking out. It’s perched right over the ocean and the rooms are open air, so you literally feel like you’re sleeping suspended above the water. It sounds as if the waves might crash right into your room. 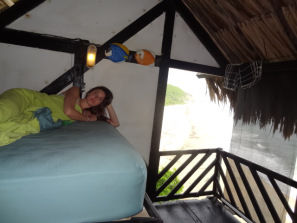