Mandu : The ruined city of india 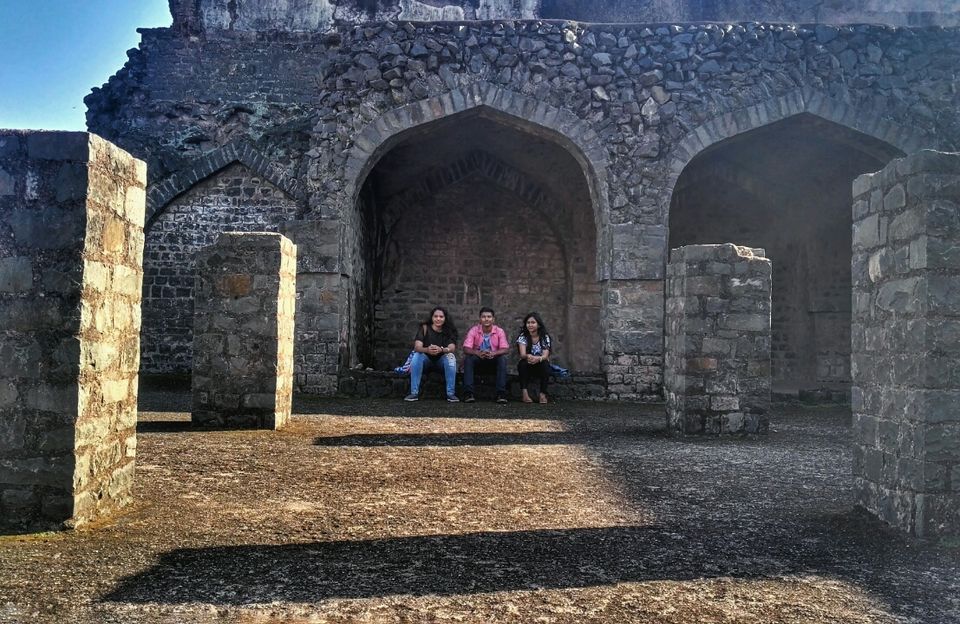 Mandu is situated in dhar district, approx 100km away from Indore city.

Leave early in the morning to cover all places in mandu.

Mandu was earlier known by the name of "Shadiabad" meaning the city of happiness (Anand Nagari), the name was given by then ruler Allauddin Khilji.

Mandu city is situated at an elevation of 633 metres (2079 feet) and extends for 13 km (8 miles) along the crest of the Vindhya Range, overlooking the plateau of Malwa to the north and the valley of the Narmada River to the south. These acted as natural defences and Mandu was originally the fort-capital of Rajput Parmara rulers of Malwa.

Towards the end of the 11th century, it came under the sway of the Taranga kingdom.

In the 10th century Mandu was founded as a fortress retreat by Raja Bhoj. It was conquered by the Muslim rulers of Delhi in 1304. When, in 1401, the Mughals captured Delhi, the Afghan Dilawar Khan, governor of Malwa, set up his own little kingdom and the Ghuri dynasty was established. And thus began Mandu's golden age.

His son, Hoshang Shah, shifted the capital from Dhar to Mandu and raised it to its greatest splendour. Hoshang's son, Mohammed, the third and last ruler of Ghuri dynasty ruled for just one year He was poisoned by the militaristic Mohammed Khalji, who established the Khilji dynasty and went on to rule for the next 33 years.

Mandu continued for several hundred years after this, but eventually the capital of the empire was moved to back to Delhi and Mandu was left alone until very recently.

Mandu is a very beautiful place. The local subsistence farming population is extremely friendly and helpful.

The people living in Mandu are intimately tied to the ruins around them.

PLACE TO VISIT IN MANDU

According to local folklore, the ruler – Baz Bahadur built this monument to convince the beautiful singer, Roopmati to stay with him. She would never agree to stay away from river Narmada. This place, being on 350m cliff, the river was clearly visible and she agreed.

We passed by Reva Kund, which is a pond. There are a few monuments around this area.

is one of the most famous structures in Mandu. Constructed between two water bodies – Munj Talao and Kapur tank, it resembles an anchored ship. Akbar’s son, Jahangir came here during his travels and described the exquisite beauty of the palace. It was lit up with thousands of lamps and the reflection in the water gave an illusion that the lakes are on fire. It was sometimes used for entertainment with a harem of 15000 women.

gets its name due to the sloping side walls.

The Jama Masjid is one of the most grand structures in Mandu. Built by Mohammed Khalji in 1454, this structure was inspired by the Omayyad Mosque in Damascus, Syria. This monument shows the Afghan architecture at its best. 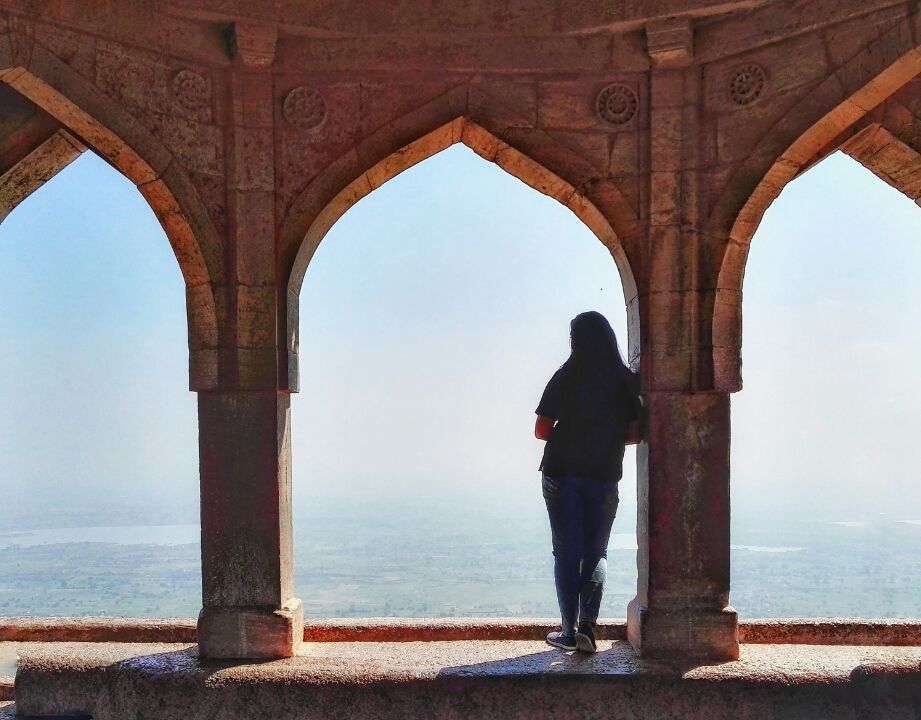 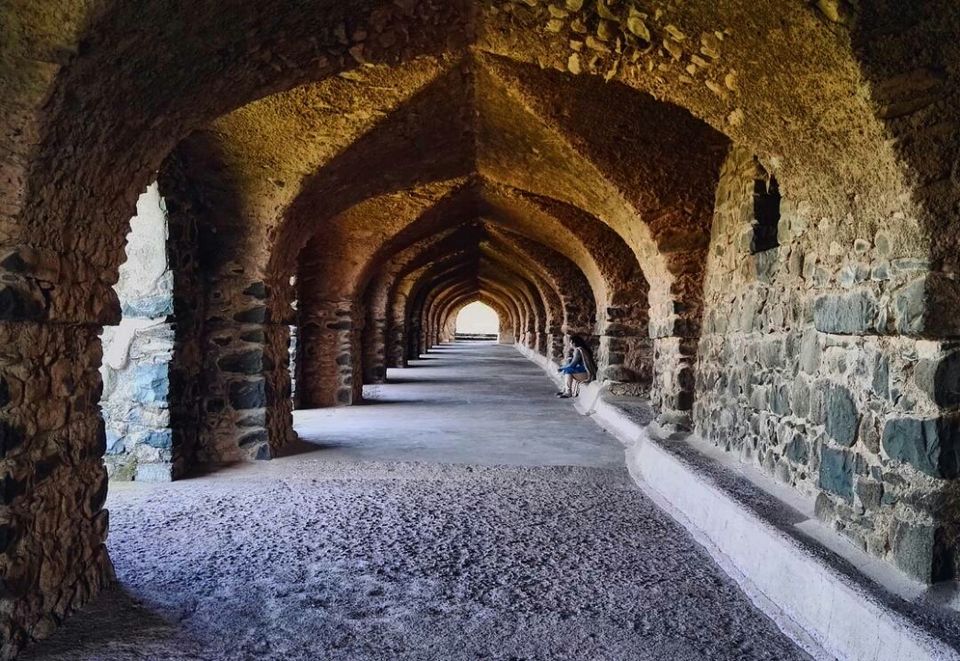 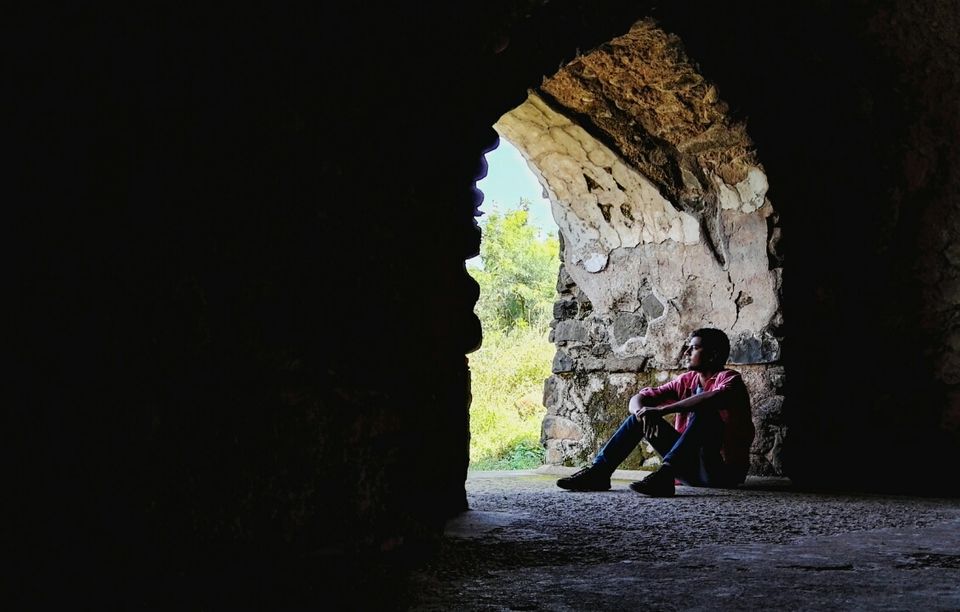 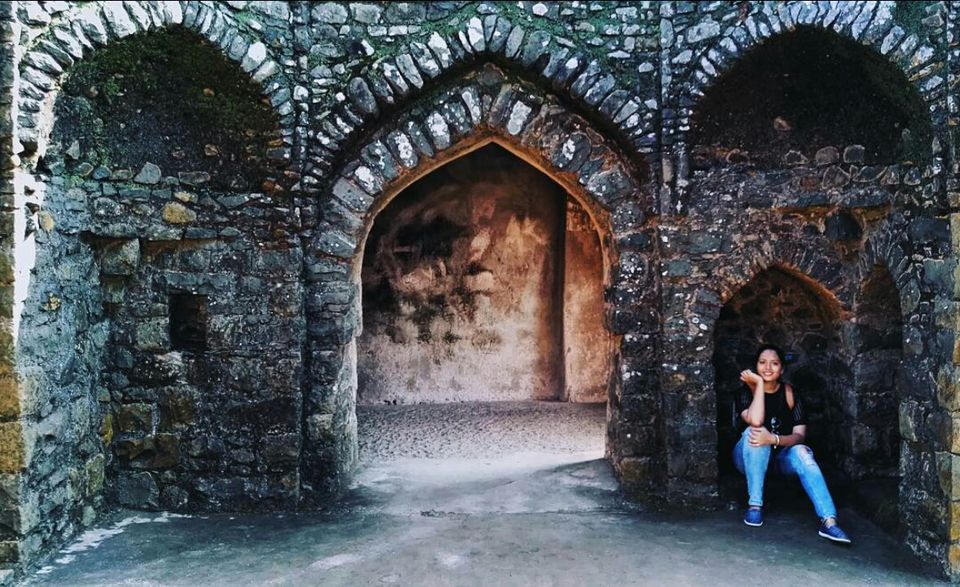 Jahaz mahal Best of all 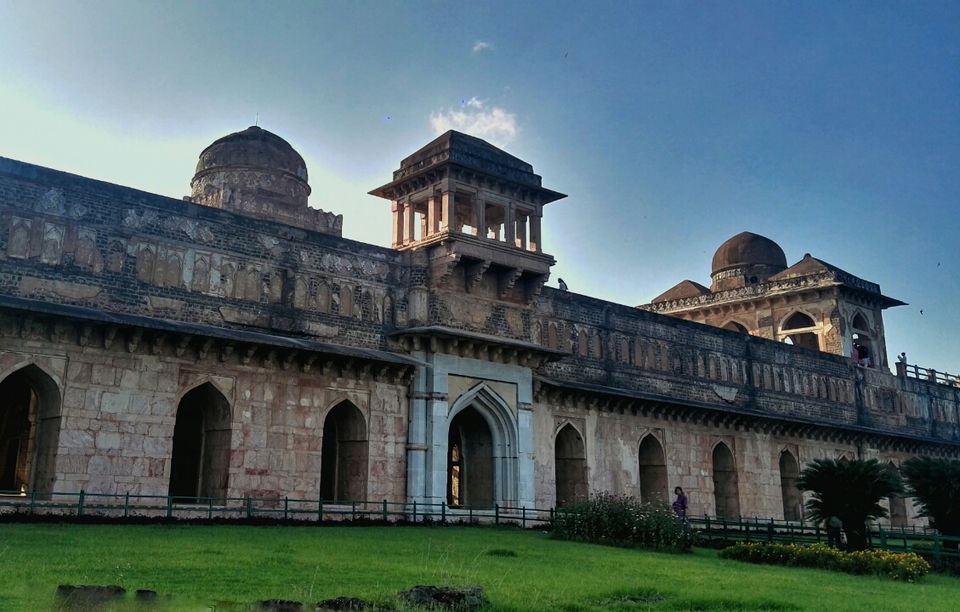 Yes, jahaz mahal is best of all. 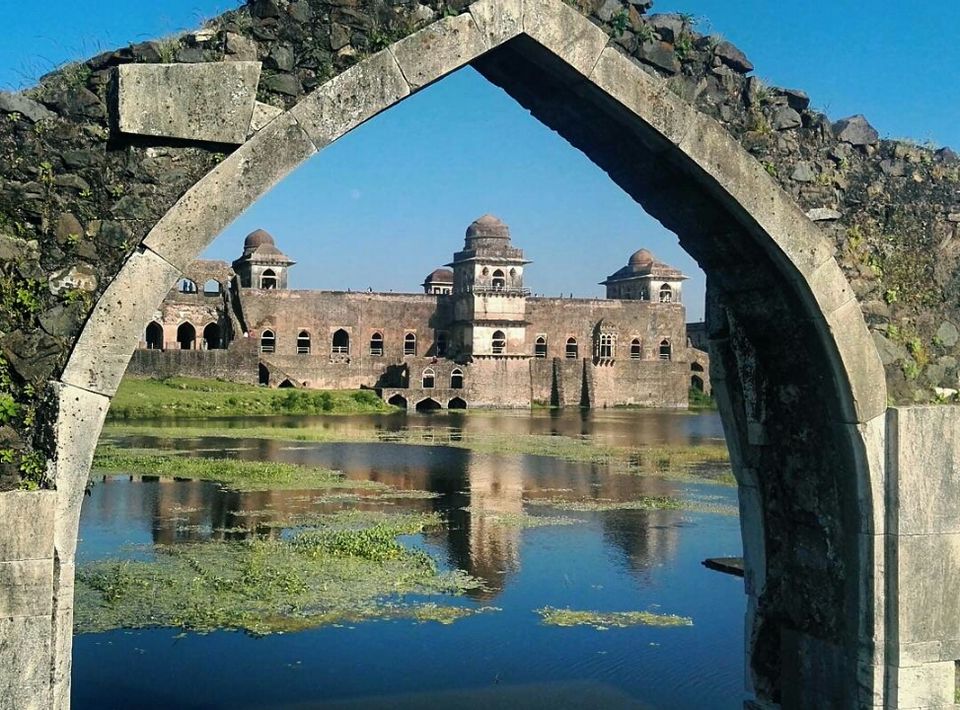 Inside jahaz mahal/ship palace Look at the symmetry Wow 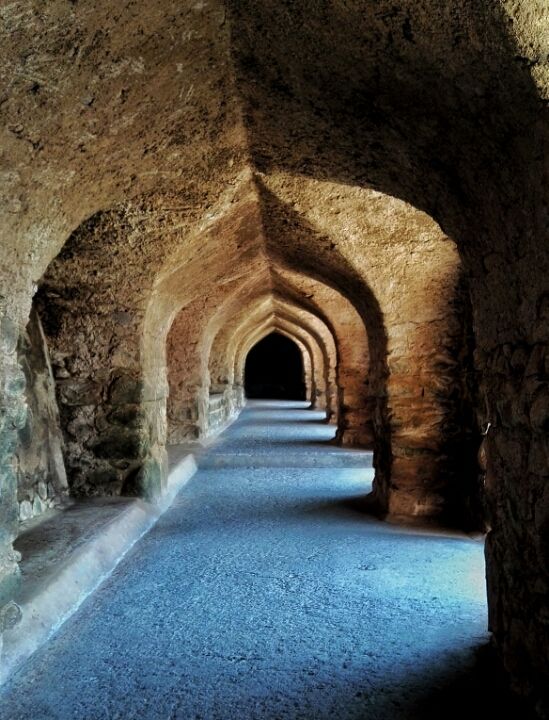 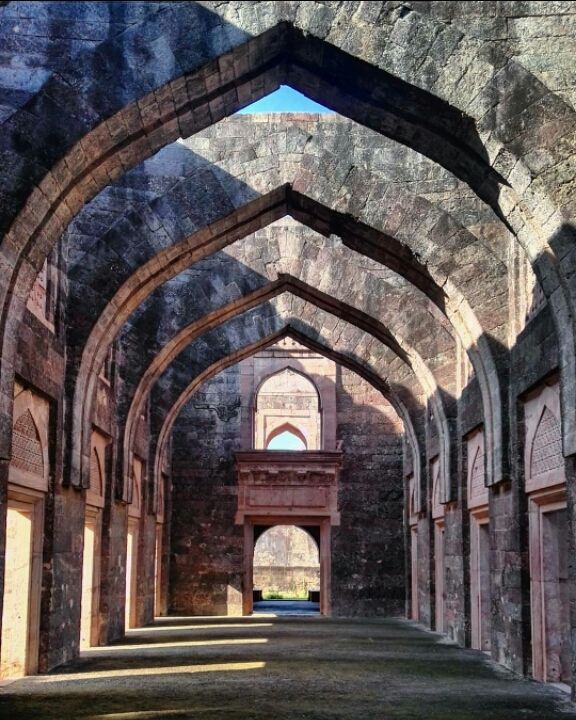 These view On our way back to indore 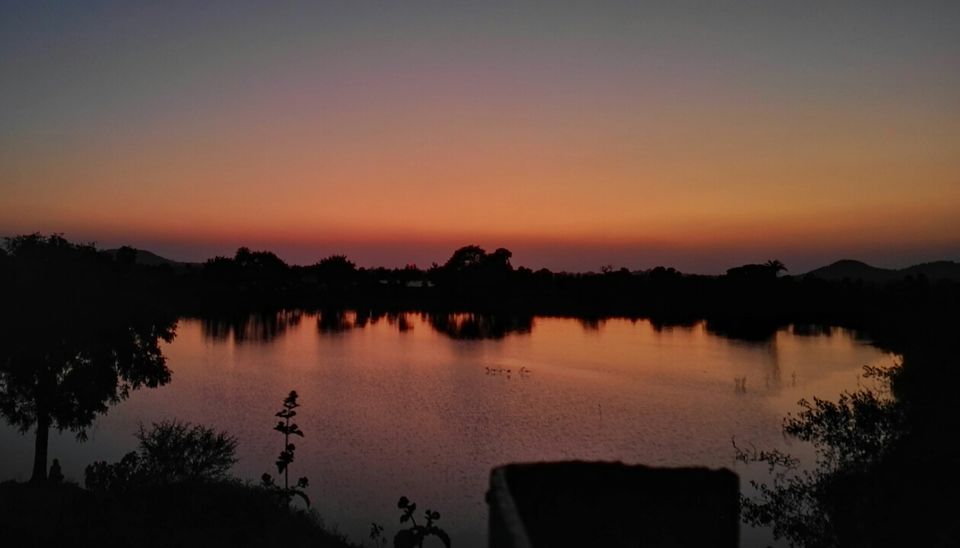