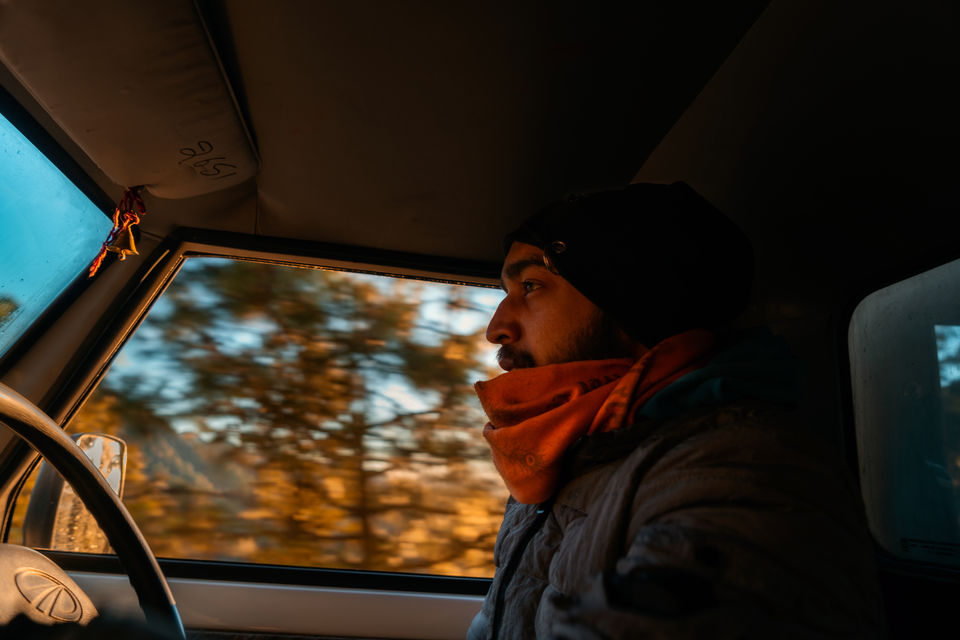 My Bus from Delhi to Haldwani, Uttarakhand was supposed to drop me at 5.00 AM. Instead it reached Haldwani at 4.00AM. As expected, it was fucking cold.From there i had to go to Mukteshwar which is 60 KM from there. I got down from the bus and heard all these cab drivers yelling names of different places but not a single one was talking about Mukteshwar. Then i got to know no shared cab goes to Mukteshwar and i will have hire a private one for 2000 rupees, i said no way i am paying that much after all this is supposed to be budget trip. Then a cab driver told me that he will drop me till a place called "Bhowali" and from there i would get shared cabs. So I paid 300 rupees for the shared cab till Bhowali and reached there around 5.30 AM. After reaching i found out that i will get shared cab for Mukteshwar only after 9.00 AM. I felt a bit dejected, then i went to this Chai shop which was just opening up and he was setting up the bonfire. The guy told me the best and cheapest option for me to reach Mukteshwar at the earliest would be talking to the Milk distribution van to drop me. so he showed me the way towards the dairy and told me put my bag at the shop and said "Don't worry this is Uttarakhand, everything is safe here and no one will steal your stuff". so i put my bag there and went to dairy and then found out that the van that goes to Mukteshwar is yet to arrive, so i went back and got bag and till then van had arrived and this van was driven by "Ankit Bhai". He said yes he will drop me there for 60 rupees, i thought that's pretty cheap and got in to the van. I took my camera out and started clicking, and then we started for Mukteshwar. He dropped the milk crates at different shops in Bhowali and then zoomed towards Mukteshwar. He was such a charming character. He asked me from where have I come, what am i doing here etc. Then he started telling me about the places we were passing by and i was clicking pictures from the van as i spoke to him. He saw that i was struggling to get good pictures from van's window, so he said he will stop the van at a good view point. I actually wanted to ask him before but didn't because i thought i would be delaying his work.

But this guy went out of his way to help me, he stopped the van 5-6 times at different viewpoints whilst telling me about the beauty of Uttarakhand. I felt so happy being there at the moment witnessing the suns first ray's falling over the mountains and having a lovely conversation with Ankit Bhai. Then we reached Mukteshwar, I had the exact change of 60 rupees but decided to give him a 100 rupee note and told him to keep the change, to which he replied "No, i cant do that I had given you my word of 60 rupees so I can't overcharge you". So i took change from him thanked him and told him hope our paths cross again. This is easily one of the best adventures i have had and also one of the best and coolest person I have met.