Mana - The Village of Many Lasts 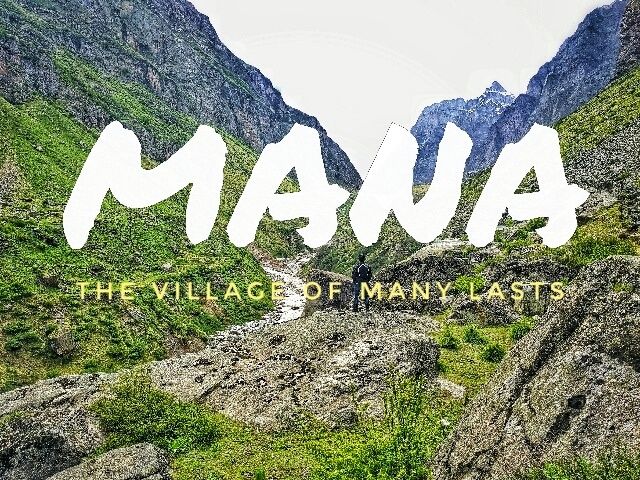 A chance encounter with a group of motorcyclists somewhere along our journey towards Rishikesh from Delhi eventually wound us up at the “last Indian village” on the Indo-Tibetan border called Mana, in the beautiful State of Uttarakhand. Located at an altitude of around 3200 meters, this quaint little village lies in the shadows of the holy town of Badrinath on the banks of the majestic Alaknanda River and is known for its dazzling vistas and intriguing connection with Hindu mythology. But this place had caught my interest for reasons other than spiritual.

The village of Mana is also the gateway towards ‘Mana Pass’, an ancient trade route connecting India with Tibet through the Upper Himalayas until its closure in 1951 by the Chinese. It is also along this trail that one comes across Deo Taal, which forms the origin point of the mystical Saraswati River. This mountain pass further developed by the Border Roads Organisation (BRO) is today under strict military control as it lies on the Indo-China border and civilians are generally not granted entry.

But that was until it earned its rank amongst the highest motorable passes in the world at 18,399 ft (5,608 m) even higher than the mighty Khardungla in Ladakh and a handful of civilians made their way across with special permits from the Army. This followed by claims that one could actually see China from the last checkpoint on this pass made it every motorcyclist’s wet dream with hordes of them trying their luck to conquer the grueling stretch barring hostile weather conditions and treacherous roads with only a few succeeding to get the required permits and even fewer who actually make it to the end.

Access to the said route requires, apart from deep connections in the Indian Army, approval from the District Magistrate Office and special permits from the Indo-Tibetan Border Police Office (ITBP) at Joshimath combined with the ability to talk your way around straight-faced army officers and bucket loads of luck.

The entire 250 kms from Rishikesh to Joshimath was a dream with roads that meander alongside majestic mountains offering jaw-dropping views of the valley below, sprinkled with an occasional town or two in between; Uttarakhand you beauty! It was easy to see why this region is referred to as 'Dev Bhoomi' (Land of the Gods). It was also then that it dawned on us that we had finally made it to the mountains.

The only downside, however, was the hordes of Sikh pilgrims on this route making their way to Hemkund Sahib. Their heightened sense of spirituality somehow dampened their road sense and we had to be extra careful not to crash or be crashed into by one of them. Their bright orange turbans and huge flags were however hard to miss as they raced away on their extra loud motorcycles that were screaming for mercy. The sight was entertaining nevertheless.

We rode into the sleepy town of Joshimath just before dusk with much vigour hoping to try our luck with the officials at the Army's IBEX headquarters there. However our journey into the almost mythical Mana Pass was cut short and our hopes shot down as even after hours of pleading with officials of the various ranks, we were denied access owing to a plethora of reasons, the most striking of which was; “You can’t simply barge into an army headquarters and request permission to a sensitive area”- Made sense.

Though disappointed, we assumed it was for the best as we had a long journey ahead and subjecting our bodies and motorcycles to such extreme conditions before Spiti and Ladakh was probably not the best of ideas. So in hopes of conquering Mana Pass another time and with our sights set on Badrinath and Mana village the next day, we settled into the cheapest dormitory we could find at Joshimath.

What followed was a cold and memorable night along with the company of two other Malayali backpackers who had quit their jobs to travel (Malayalis are everywhere, I kid you not). It felt good to share the mother tongue so far away from home, bitching about issues common to us folks north of the Country.

A long queue of pilgrims from across the Country awaited us the next day as we made our way to the holy shrine of Badrinath, which is also one of the pilgrimage sites of the original Char Dham Yatra; the other three being Rameshwaram, Dwaraka and Puri, one in each corner of the Country.

Hindu ideology has it that visiting the Char Dhams during one’s lifetime was a sure shot way to attain salvation. Dedicated to Lord Vishnu and set against the backdrop of the mighty Himalayas on the banks of the Alaknanda, the colourful Badrinath Temple was quite a sight. The crisp, chilly weather added to the almost electrifying atmosphere of the place.

From here a short ride of almost 3 kms takes one to the nearby village of Mana. Having recently acquired the moniker of “last Indian village”, a giant signboard welcomes you to the place stating just that, right past the check post that leads to Mana pass. Once at the village, one can find a handful of shops selling Maggie and tea prefixed with the words “India’s last tea shop” on their titles alongside traditional mud-houses along a narrow alleyway.

A little above the village, a rocky trail meanders into the higher reaches of the Himalayas and is widely believed to be the ‘path to heaven’ as the Pandavas supposedly walked past Mana along this route on their journey towards heaven.

This also explains the presence of the Bhim Pul here – a huge boulder that forms a natural bridge across the gorge, believed to have been thrown into place by the mighty Bhim himself to help his beloved wife, Draupadi cross the raging Saraswati River.

Further concreting its roots with ancient Hindu mythology is the Ganesha and Vyas caves, where Lord Ganesha is believed to have penned down the epic tale of the Mahabharata as dictated by Vyasa and the latter, where the sage himself lived while composing the sacred Vedas.

Whether or not the path actually leads to heaven is a different question altogether but what it does lead to is the gorgeous Vasudhara Falls that requires a trek of around 5 kms from Mana. The rugged terrains and the thin air make for a challenging ascend through the panoramic views of the pristine valley on-route make it quite rewarding.

For more ardent trekkers, this route also leads to the Satopanth Lake, an auspicious glacial lake that requires almost a day’s trek from Mana. The divine Trinity; Brahma, Shiva, and Vishnu are believed to be meditating at the three corners of this triangular lake.

The original inhabitants of the village trace their origins back to Mongol tribes and follow a migratory way of life as they move to lower altitudes during the harsh and inhospitable winters. And although an enterprising village in the past that traded various agricultural produce on a regular basis with Tibet, after the closure of the trade route post the Indo-Sino war, their livelihood today solely depends on the number of tourist footfall in the region that mostly consists of pilgrims visiting Badrinath.

The Mana women traditionally excel at the craft of weaving and are reputed for their hand-woven woollen shawls, garments and carpets that make perfect souvenirs for loved ones back home. The place is also famous for its potatoes grown locally and you’ll come across large potato sacks neatly arranged along its narrow streets, ready for sale.

Mana is a village stuck in time. The town instantly draws you to its old world charm scattered along its rustic lanes and idyllic slopes past traditional houses and friendly faces. The air is crisp and in no hurry to go anywhere, just like its people.

A glimpse of the Saraswati River before it disappears underground only to merge with the Alaknanda a few meters away.

Summer months of May and June are the most ideal to visit this high altitude Himalayan village. But be warned, this is also the time when the pilgrim tour of Char Dham Yatra at Badrinath and Sikh pilgrimage to Hemkund Sahib also begins. Expect a huge inflow of pilgrims during this season up until the deviation towards Valley of flowers and further towards Badrinath.

Monsoons may get pretty hostile and are generally avoided by tourists who instead flock to Mana once again post monsoon until November. The entire region receives heavy snowfall in the winter months and will most likely remain shut down as the villagers migrate to lower altitudes.

The nearest rail-head is at Haridwar, located at a distance of around 275 km from the village and the nearest airport at Dehradun around 320 kms away. Road transport is the only means to get here from both these locations.

One will find a plethora of options suitable for all budgets at Badrinath which is the closest to Mana before which Joshimath is your best bet, almost 50 kms away. We were able to comfortably cover both Badrinath & Mana before heading back to our dorm at Joshimath in a day.

However, if you plan to trek to Vasudhara Falls, it would be better to camp at Badrinath and plan your day accordingly as it'll most likely take around a couple of hours one way and it is not advisable to trek post sunset.

A lot of effort goes into making each of these posts, if you found the information useful or know anyone who might, please do follow & share my blog here.

Already been to Mana? Let me know what you think. Thanks in advance.