The Last Tea Shop of India 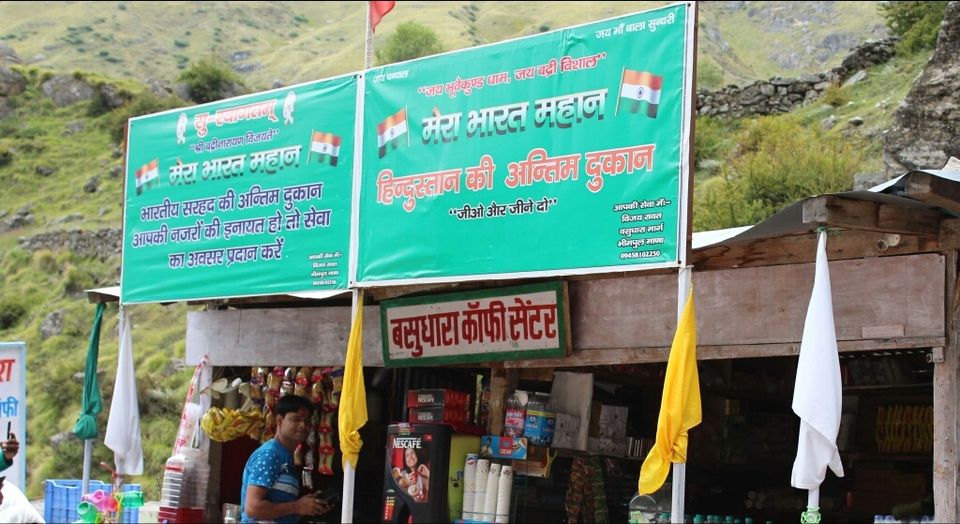 Yes, you head it right, hidden in the god’s own state Uttarakhand. India's last tea stall surrounded in the middle of beautiful Himalayan hills at an elevation of around 3118 meters. The smell of green earth, away from the outer world, it is the perfect palace to have your Tea and find your inner self.

The journey in search of this hidden shop took me to the Mana Village which is popularly known as The last Indian village just 5 k.m away from the holy town Badrinath located at Chamoli district of Uttarakhand. The entire route was smooth and covered with the dazzling beauty of the mountains. While reaching the village we parked our vehicle at the village border because of the diminutive village. 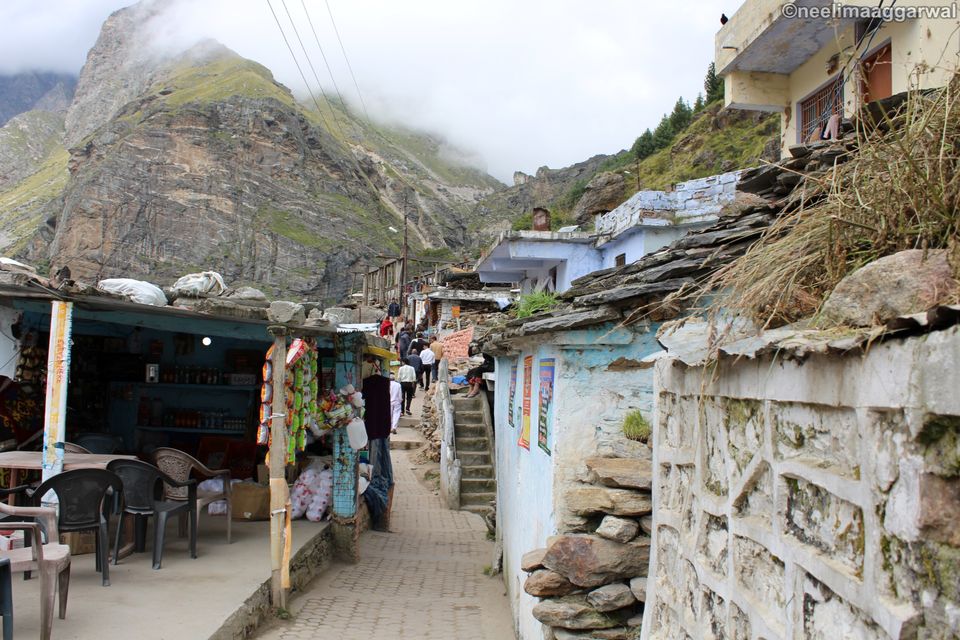 There is a gate before stepping into the village 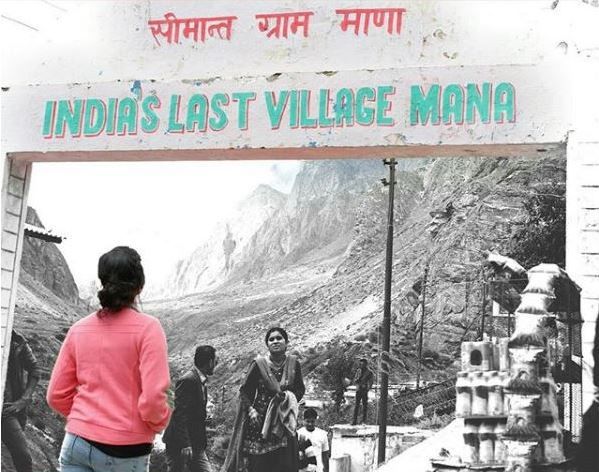 By the time I stepped into the village I forgot everything Such a beauty it is, the refreshing walk in the midst of the heavenly Himalayan surroundings – just you and nature! by moving ahead with the town there were the narrow quaint lanes to walk and barely one or two stalls like one on the left in the picture.

There was stillness in the air, it was calm and in no hurry to get anywhere. The palatial mountains, the sparkling water of the river Alaknanda by the village side. It was the time of September which is said to be a great time to visit this place although the drizzly season has the danger of landslides, so it is preferable to avoid that time.

The beauty of the village in its own 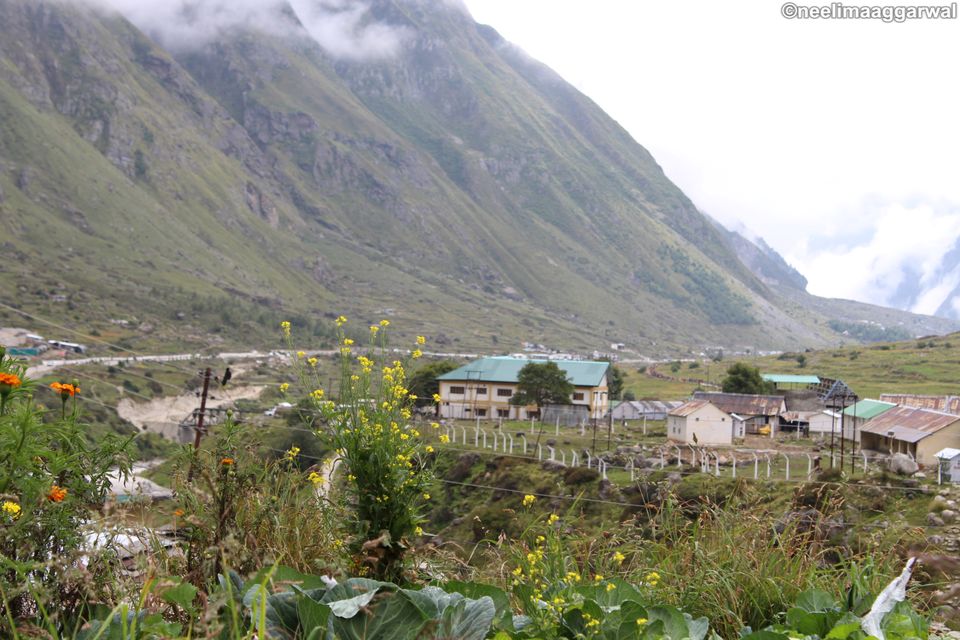 This old lady is knitting sweaters for her livelihood 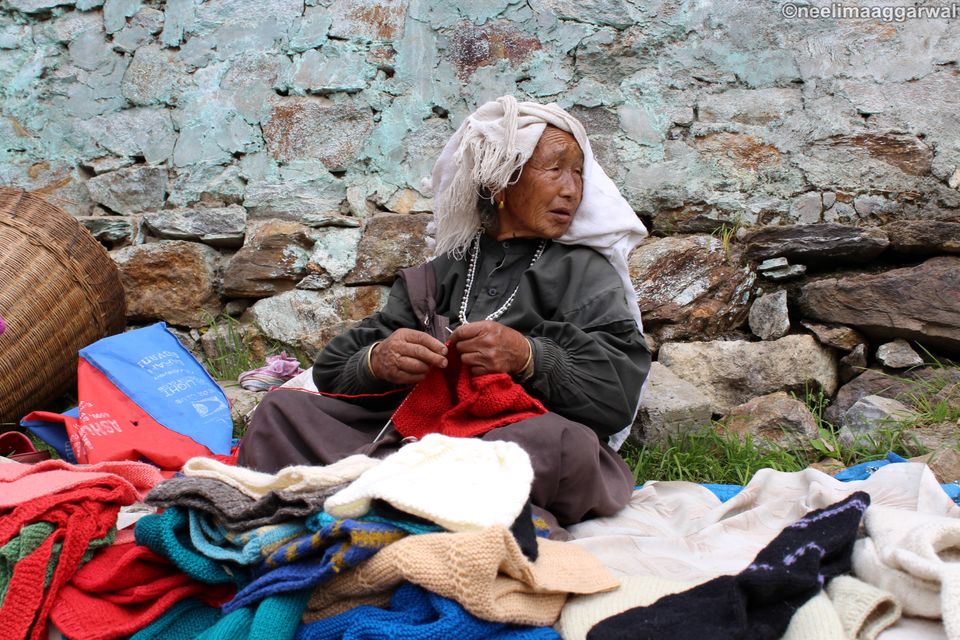 As I walked further, I observed people were engrossed in their respective works... knitting dresses, washing wool (taken out from the sheep's) without any fancy machines. Also, there were handcrafted stone and wooden houses mini cottages with small doors and windows, I wish if I could live here at least for once. By the time I noticed many women wearing their traditional attire and one of them told me that there is one of the most stunning and glorious festival is going on which is Mata Murti Ka Mela and is celebrated every year. During this festival, the mother of lore Badrinath is worshipped. A huge fair accommodating numerous people and visitors are held during this day. I felt my self-fortunate enough to be a part of this festival. 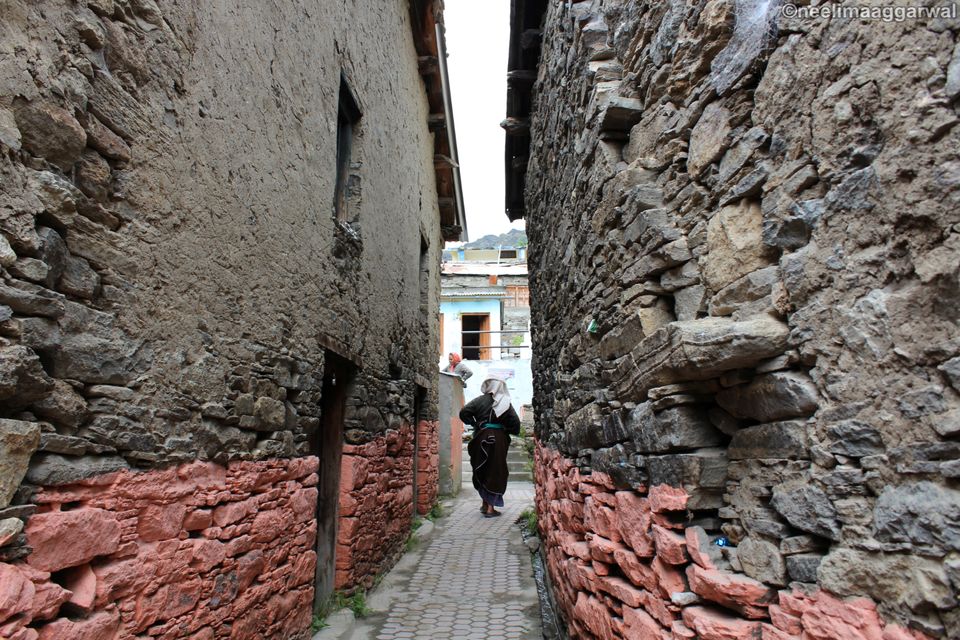 Beautiful lady in her traditional attire going for the festival 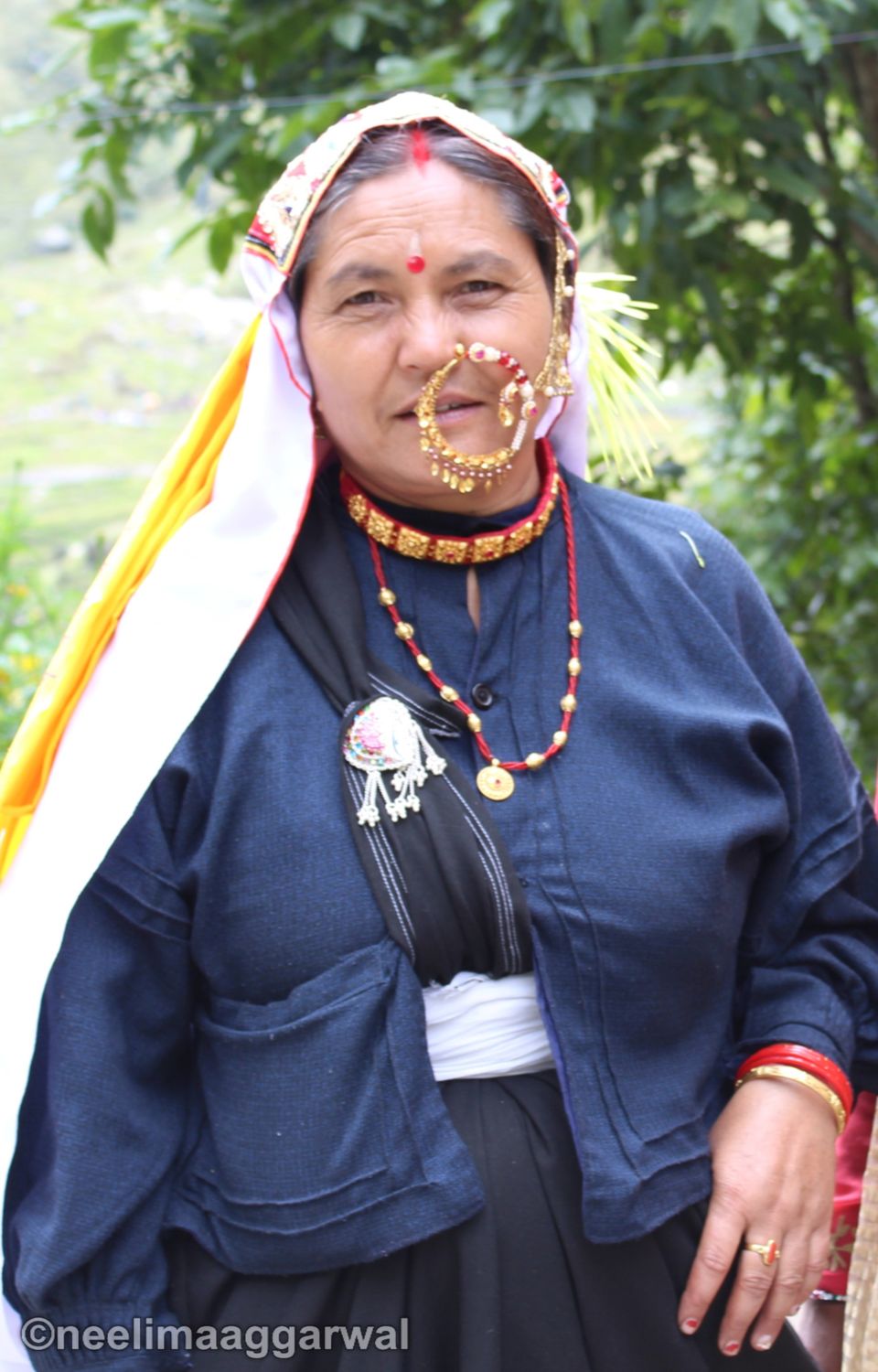 A woman in her traditional outfit on the left 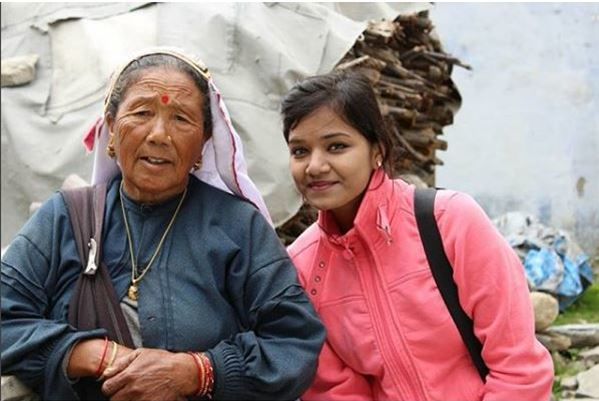 With the endless view of the village, I found it's not only about the village, it does have some mythological facts and beliefs there were different temples and a cave which is believed to be pious.

Mountains and serenity, at an altitude of 3,200 meters MANA is a beautiful village 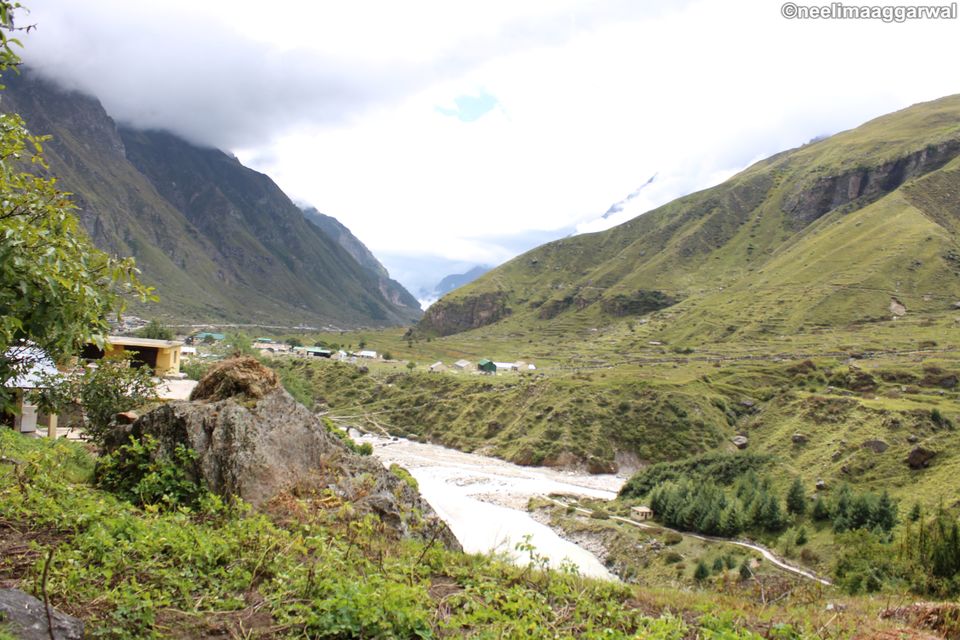 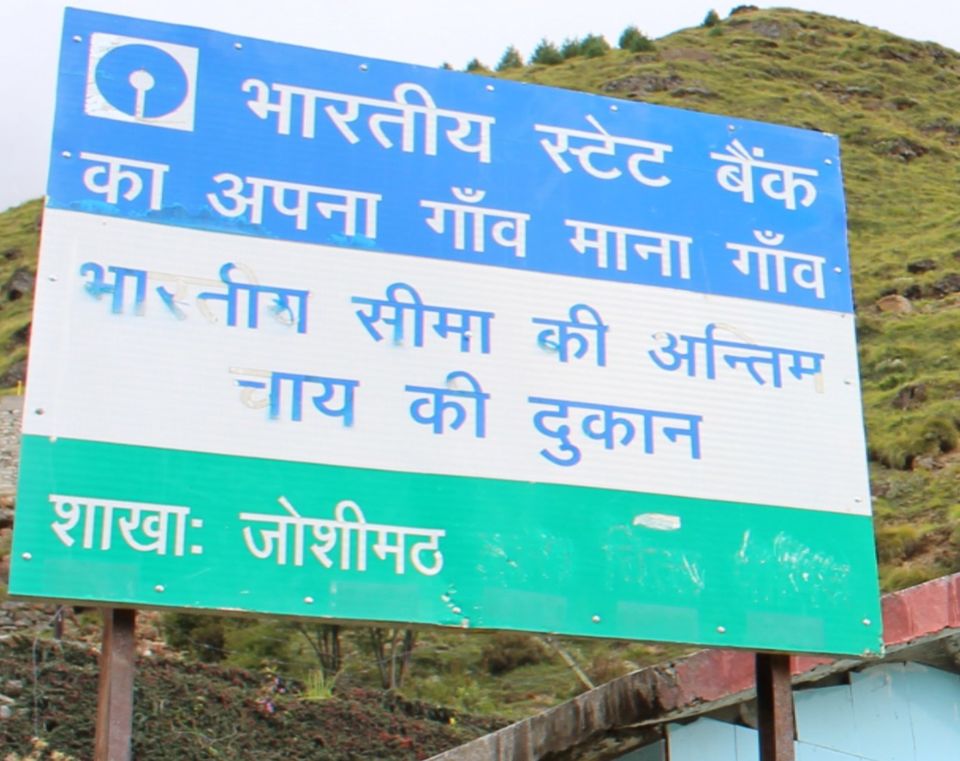 The village is an undiscoverable realm of beauty you will keep discovering something new with your step moving forward and this time it's a bridge kind of formation across the river Saraswati believed to be from the time of Mahabharata, it is said that Bhim placed that rock (Bhim pul) to make way for Draupadi to cross the river during their journey toward heaven. The water current of the Saraswati river was very strong and the wind was strong too. After getting enlightened with the mythology and a good dose of nature’s delight I finally found the tea shop on the edge of the Mana Village.

Laidback and serene, the most sacred river Saraswati you will never find this anywhere as it disappears from here 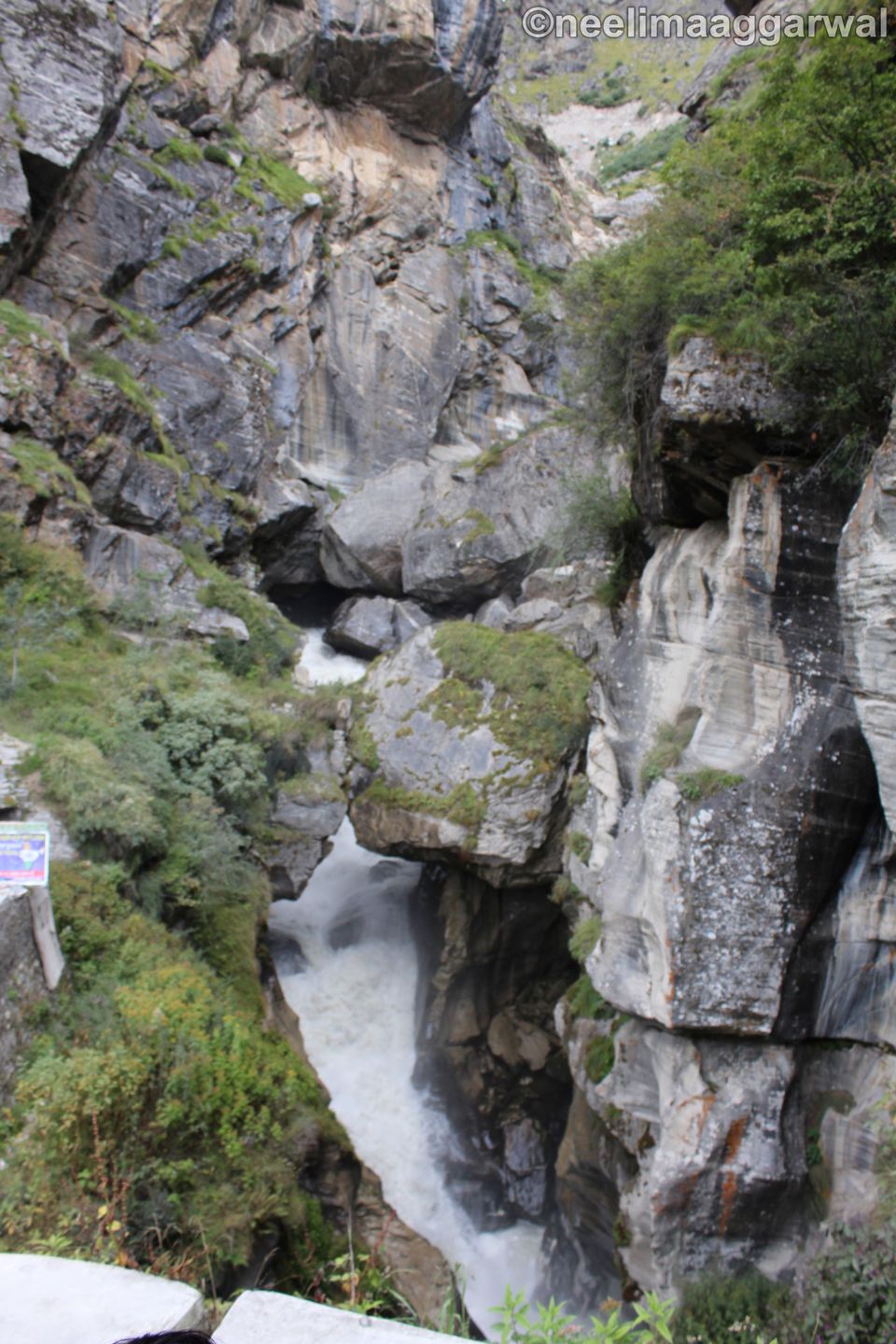 The area around the Tea shop relax and calming 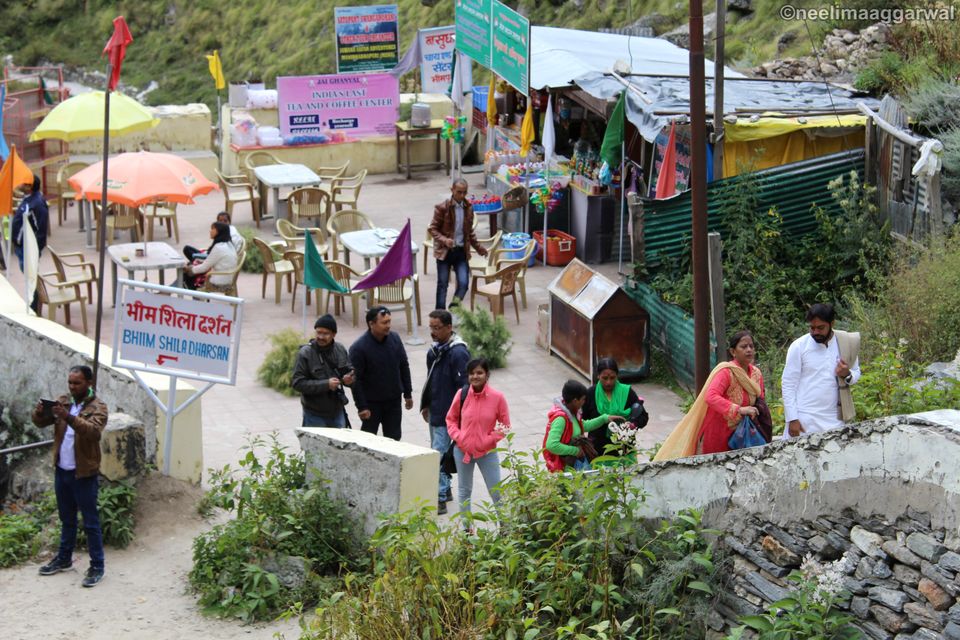 Here is the place where the village ends, India's last tea shop. The space around the tea shop is very relaxing and calming you can sit and enjoy for a little while having tea, coffee or Maggie anything you like. This tea shop is nearly 25 years old, the shopkeeper gave this name to attract people also, this is the last point before the Indo-Tibet/China border.

The reason behind why it is said to be India's last tea shop is because it connects Indo-Tibet/China border as the place is in the extreme north. And Tibet is just a mountain away from here. Isn’t it sounds amazing yes….but no because you can’t travel there, there is a pass between India and Tibet i.e, Mana pass which also contains a beautiful Deotal lake from where the Saraswati river originates. Mana pass is not open for civilians and you need special permission from the administration to go on a trek. because of the security reasons…the pass is only used by army men’s and ITBP to carry supplies. Otherwise, the pass gives you astonishing views if you get a chance to trek there.

At an elevation of 3,200 meters, you will hardly remember anything but the abundance of nature, standing in between the mountains, the fragrance of nature and the charming village can make you forget everything. It is the best place for adventure lovers and explorers who really like to explore hidden and unseen places. And if you love trekking this is the perfect place to go on some real trekking I mean the serious one. There are many different trek routes like mana to satopanth, mana to vasudhara, mana to charanpaduka. 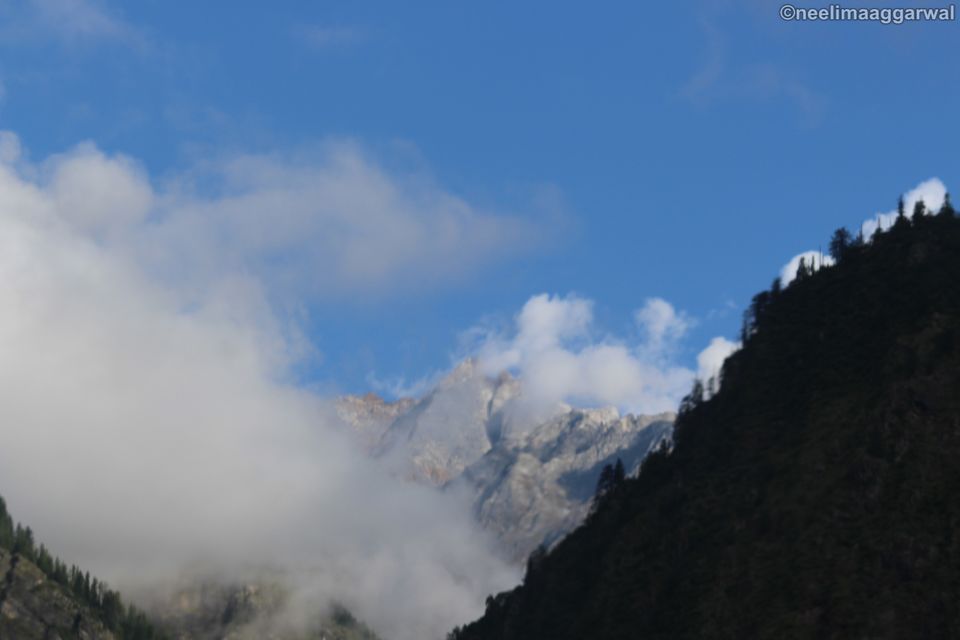 An incredible day it was reminding me again of what a pleasant break it is to enjoy those hushed moments of beauty and silence at its very best!

People are going to the festival 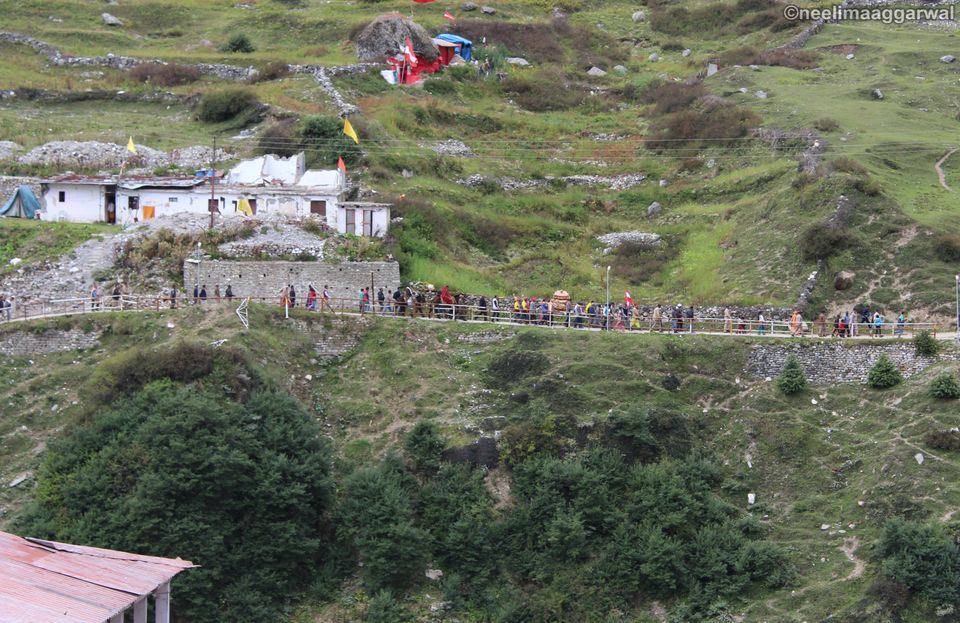 Why is the place popular?

The village is mainly popular for many trek points and also because of the village tourism. Earlier, the village was not very popular until the State government declared it as a tourist attraction and going to make it as Countries Iconic Place. The inhabitants of the village are called bhotias (Mongol tribes), these people migrate to diminish places in every 6 months (as it gets snow-bound with sub-zero temperatures which became difficult for them to survive).

The Mana people are also reputed for their weaving skills. The woollen garments and materials like mufflers, cap, asan, pankhi (a thin blanket made of sheep wool)… apart from it, mana is also famous for some vegetables like potatoes, cabbage and also kidney beans. My mother bought a giant cabbage which, I have never seen in metropolitan cities.

Attractions near the village!

Neelkanth peak: at an elevation of around 6,597 m above the sea level this place is known as 'Queen of Garhwal'. The numerous bharmakamal can be seen from this place. It located above the Badrinath temple.

Tapt Kund: a natural spring water, it is believed to be the abode place of Lord Agni. It is believed that the Kund has therapeutic values and can heal many skin diseases.

Vasudhara Fall: the fall is located at a 5km distance from the village. The trek is bit backbreaking filled with stones and pebbles but the stunning view of buoyant vasudhara river valley will make your journey worthwhile. Best time to visit is may to October or November.

Deo tal mana pass- deo tal is a sacred lake atop mana pass, the lake is believed to be the origin of river Saraswati. man pass was an ancient trade route between India and Tibet. it appears now to be one of the highest vehicle access pass in the world.

One of the Highest Motorable Road

One of the highest Lakes in the World

Mata Murti Temple: the temple is devoted to the mother of Lord Narayan. The temple holds a magnificent festival (Mata Murti Mela) every year in the month of August or September. I would prefer you to must visit this place during the time of this carnival.

Many other places are:

Weather conditions: climate is usually chilled here so I would prefer you to carry some woollen clothes and common medicines with you.

How to reach Mana village?

Mana village is connected with Haridwar/Rishikesh directly via NH-58 along with Badrinath and Joshimath towns.

The nearest railway station is located at Haridwar which is around 275 km from the village. From there you can take the Bus or hire a taxi which will take you to Mana village.

The nearest airport is jolly grant airport which is located at Dehradun which is around 319 km away from the village.

So if you are a die-hard Tea lover this place is a must visit once before you die. The Place is such an untouched beauty, fresh air away from the cities big smoke, pollution free air and bask in nature. You will never find any village like this anywhere.