Corbett National Park: My Tryst With The Tiger

Corbett has always been on my bucket list since a long, long time. So finally when the trip was planned, I couldn’t contain my excitement. A fun road trip up north, with my 2 best pals, clubbed with the beautiful hill stations Nainital & Kausani, what better way to spend a quick summer holiday!!

Our journey began from Delhi airport, an 8 hrs road trip to Nainital. Not much to see as most part is a straight highway. Towards the end of the trip, once you start ascending the Ghats, it starts getting cooler and greener and fresher. The twisting and turning ghats are long and seem never ending, so beware if you are not comfortable in your road travelling.

Nainital is a beautiful hill station in the state of Uttarakhand, where the main attraction is the lake. A cable car ride to the top, a boating trip, and a visit to the local shops is the best way to spend the day. We discovered a quaint little cafe overlooking the lake, called Sakley’s...which is a British origin cafe and serves some of the best pizzas and pastries..Yummy!! And of course, no visit to the north can ever be complete without tasting some local roadside prepared maggi noodles..the flavours, spices and variations that they offer in our plain old maggi noodles is fascinating 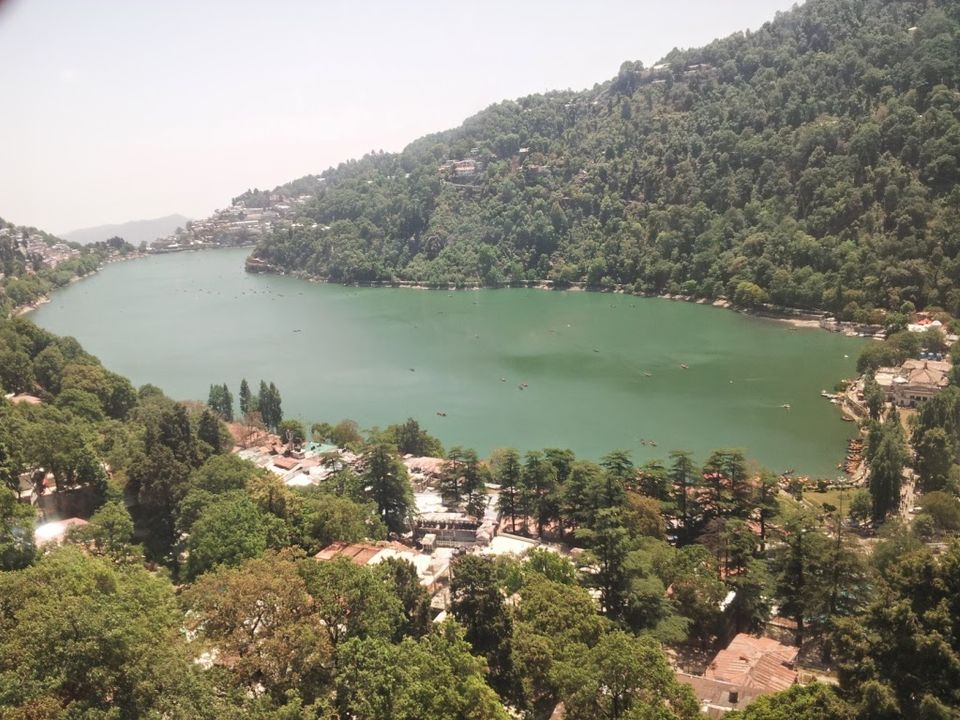 After a 2 night stay at Nainital, we began our day 3 journey to Kausani. Didn’t know what to expect from this lesser known hill station, however had read up on Wikipedia as it being referred to "Switzerland of India". The journey again was a long twisty one on the steep ghats with a beautiful long (but dried up) river bed continuously accompanying us on one side, and lush green valleys on the other. And once we reached, there it was!! A beautiful glimpse of the Himalayan snow mountains bang opp our Hotel. The landscape of Kausani resembles Switzerland, green fields at the bottom, the valleys surrounding it, and snow mountains peeking at a distance! This was even better than Nainital, which is now become much commercialised due to its popularity and the numerous film shootings. At Kausani, a visit to the tea gardens and shawl factory is interesting, apart from this it is just a very peaceful place to relax and unwind at the hotel. We also got to witness a forest fire in the distance, which is very common during the dry summer months 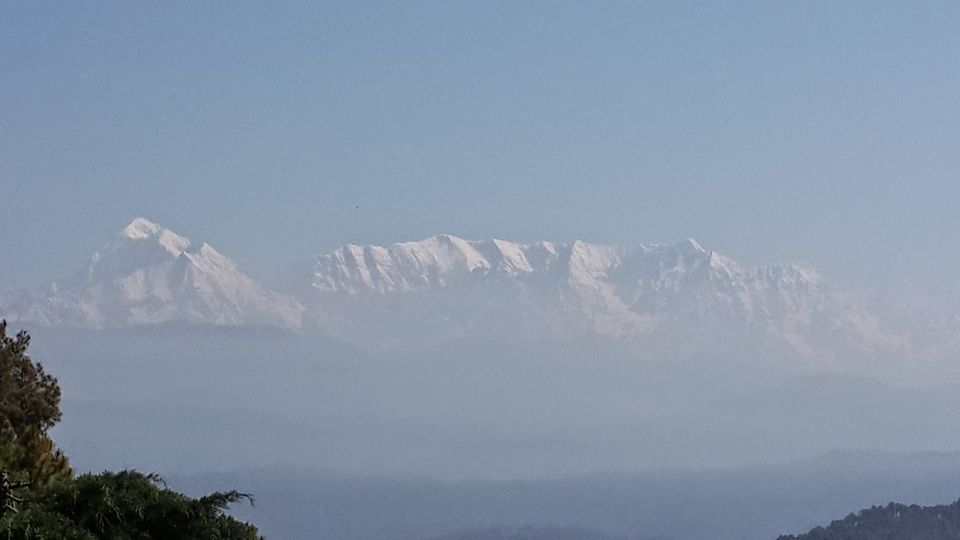 With just a 1 night halt at Kausani, we left with a heavy heart and a promise to return back to explore more someday soon. Finally, corbett, here we come!! Images of Ferocious man eating tigers and brave tales of Jim Corbett kept going on in my mind. Would we spot a tiger or not?? This was the question in everyone's mind. Our stay at Corbett was at Corbett Jungle Club Resort, right into the wilderness. From valleys and snow mountains to bang into the heart of the dense forest was quite a contrast. Things to see in Corbett are Corbett waterfalls and Jim Corbett Museum, apart from the jeep and elephant safari which is a must do activity 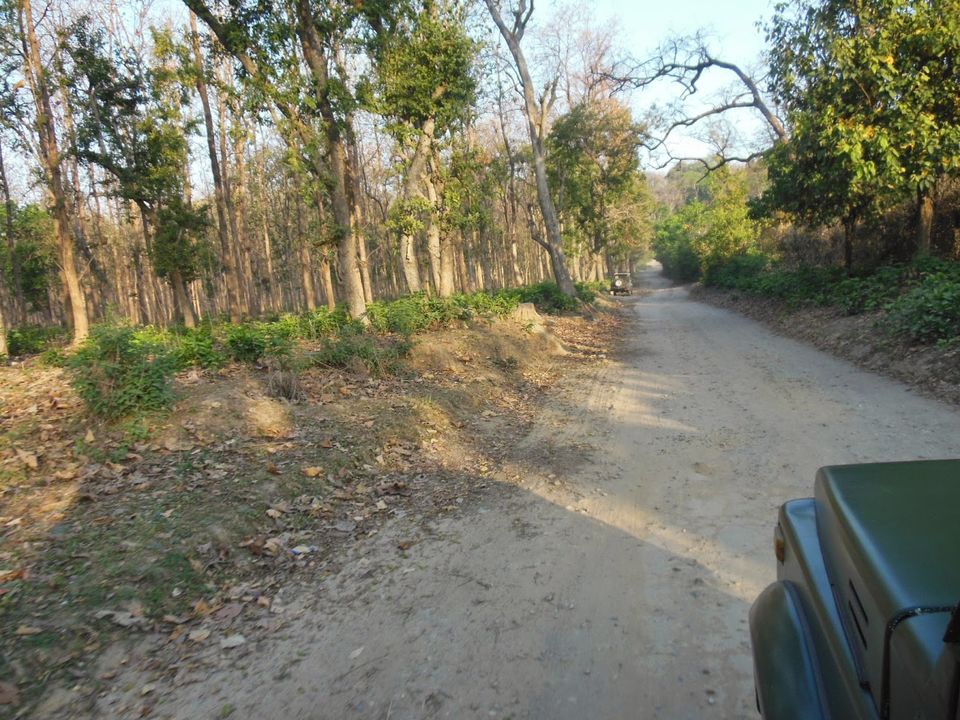 Our Jeep safari began the next day at 5.30am. With a lot of anticipation and our cameras ready to capture the jungle, we began our open jeep ride through the dense forest. Easy to spot were lots of monkeys and deers (spotted deers, barking deers and one more species whose name i have forgotten!!). However my eyes were peeled wide open for any glimpse of the TIGER! Our driver said that monkeys and deers are best friends in the jungle. If the tiger is spotted, the monkeys will start making a sound to alert the deers. If there is no sound then there is no hope of spotting a tiger. Great! Now my eyes and EARS were on high alert as well. A little ahead we spotted a wild elephant, a peacock and even wild hens!! No Tiger yet. Halfway down the jungle we crossed an open river bed and spotted some tiger pug marks!! Finally I thought something to talk about!! A jeep crossing us said a tiger had been spotted on top of a hill, so we raced towards that spot, only to find 20 more jeeps already parked at the bottom of the hill. On top of the hill, at a very far distance, could make out an animal lying down. Come on, get up, do something, i kept praying silently but to no avail. Thanks to the crowd and all the people making a big noise and racket and talking and laughing and creating a circus, whatever that animal was had no intention of showing itself!! Why can’t people just be quite and shut up, this is a jungle safari not a circus!! At last a few jeeps went away as they got bored. We decided to wait patiently for a few more mins. And at last, Mr Tiger wagged his tail, got up for a few seconds to change sides and then went back to lying down!! It was a very far glimpse and could not get a clear picture, but yes yes yes we did see a TIGER!! Yippee my excitement was sky high. Finally I have something to boast about back home, i said :) 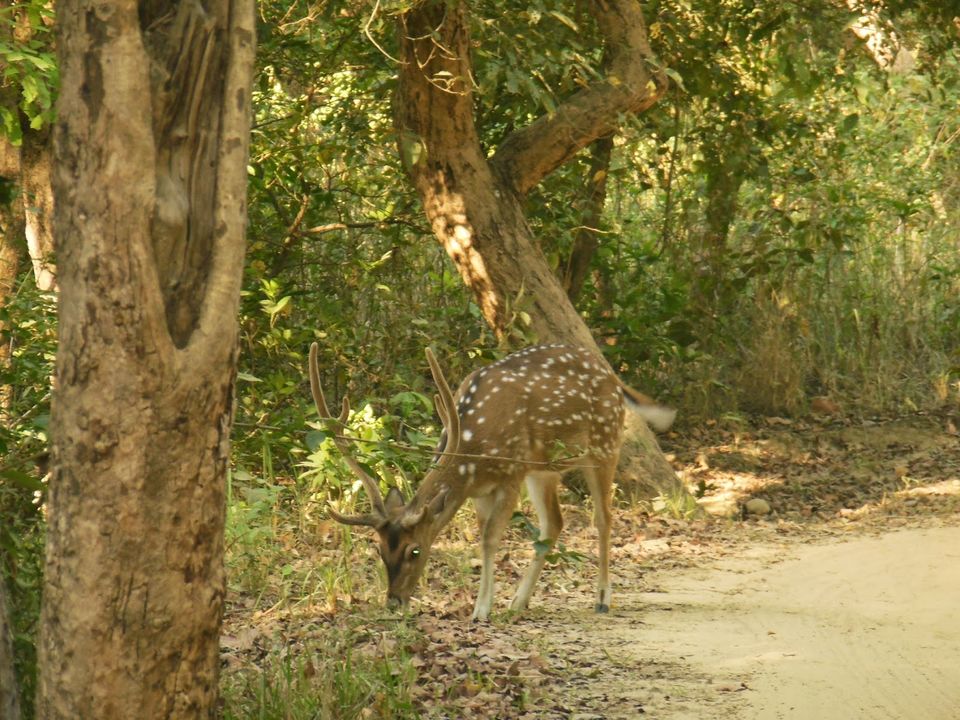