When Nature Beckons - A trip to Jim Corbett National Park

Termite hills are the health indicators of an ecosystem like Jim Corbett National Park&nbsp; 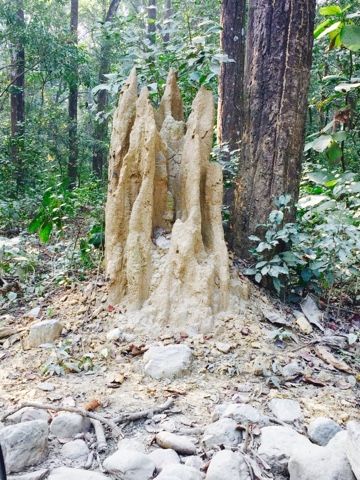 We chose a road trip ,starting from Delhi and going through Moradabad-Thakurdwara-Kashipur-Ramnagar route to reach our destination.Passing through Muradabad district one can't help noticing the lush sugarcane and yellow mustard fields on both sides of the road and the road itself traversed by tractor lorries loaded with sugarcane on its way to the sugar mills,suddenly realising why Uttar Pradesh is called the 'Sugar Bowl of India '!

The road was well maintained but since there are no street lights on the Ramnagar road only glow signs that help in navigation ,a daytime journey would be recommended specially if it's your first trip.

We stayed at the Jukaso Manu Maharani resort at Ramnagar .The resort is located just next to the river Kosi and offers a beautiful view of the gushing river.The resort is beautifully landscaped too .The staff was courteous , the food offered was upto my taste and the rooms were spacious enough .

The next day,fully refreshed , we first took a small hike towards the river bed and were mesmerized by the clear waters and the gurgling and gushing river . While going out, local residents informed us that a tiger had attacked and killed a cow tethered at the roadside just close to our resort that very same morning! Moreover they said the tiger would in all probability return soon to visit his kill .

While on the lookout for the safari arrangements, I came across a Primary Health centre and since my last blog was about responsible tourism ,I decided to get some information first hand .I introduced myself and I was pleasantly surprised to see that the doctors and staff were at the centre well on time and also well stocked and well informed about the patient visits .In fact the doctor in charge had already left for visits to nearby areas .

Pat on the back to Uttaranchal administration for good roads, health care and education facilities .

In the afternoon we ventured on a Jeep Safari, elephant safaris are also available but they were already booked so we undertook a Jeep Safari .

We spotted migratory Ruddy Shelducks at the Kosi barrage and also kingfishers, common pea fowls ,woodpeckers ,egrets and swifts among the birds .I apologize for not giving the full names of the birds as my knowledge of the birds is limited .

Along the way we spotted fresh tiger pug marks which according to our guide were just a few minutes old !

Among some other animals that we could see were wild boars ,spotted deers ,langurs ,macaques and herds of Elephants .

Our guide told us that we were very lucky to have even spotted these animals .

But the icing on the cake came the next day when our driver called me early morning to inform that the tiger had come back to look for his kill .We ran as fast as we could ... and there it was ... the majestic beast of the forest !His huge striped body and those piercing eyes as if sizing us all ...

Soon a crowd gathered and the Tiger started quietly slipping back into the shadows of his empire .He stayed behind the tall bushes for a while before finally moving away.We could make out that the tiger was around though beyond sight because the cattle tethered in that area had their ears all pricked up and was standing still .Even some peahens sitting on the trees were quietly huddled together ,not flapping not crying out .It was as if all were in awe of the Tiger !

Peafowl generally do not give out alarm calls when the tiger approaches - as the locals informed us helpfully.Monkeys and other birds commonly give alarm calls when a tiger is striding into the vicinity .

With that sighting, our trip too concluded as we were to leave that very same day .

Alas ! I could not capture the sighting of the Tiger discerningly !

But the vision of the Tiger,our parting gift from the Jim Corbett National Park , had us all thrilled and overjoyed !

"We shall come back again soon Corbett national Park !"