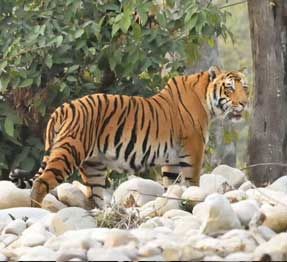 "There are total 37 world heritage sites in India out of which 7 are natural habitats for preservation Nanda Devi Biosphere Reserve and Valley of Flowers in Chamoli - both located in Uttarakhand. "

News Update, Dehradun: After Nanda Dev I Biosphere Reserve and Valley of Flowers; Jim Corbett National Park and Nandhaur Wildlife Sanctuary is now on its way to becoming a UNESCO World Heritage Site. The Uttarakhand forest department has written to the state government requesting it to consider and push for a tag. Chief Conservator of Forest Dr. Parag Madhukar Dhakate has sent a proposal to the government to include these two natural sites in the UNESCO list. At the same time, the Forest Minister has also spoken strongly to the central government for this. The forest department officials said the status of world heritage will help the wildlife conservation projects get global attention.

Both sanctuaries are famous for jungle safari

So far, two natural sites in Uttarakhand, Valley of Flowers and Nanda Devi Biosphere have been included in its list by UNESCO. No one had tried in the past to include the world-famous Jim Corbett National Park in this list. On Friday, forest conservator Parag Madhukar Dhakate prepared a proposal for inclusion of Nandhaur Wildlife Sanctuary in the UNESCO list along with Jim Corbett and sent it to the Chief Wildlife Conservator.

One of the pioneers in Project Tiger, the Corbett National Park is currently home to 260 tigers along with 110 species of plants, 50 species of mammals, 580 species of birds and 25 species of reptiles.

UNESCO (United Nations Educational, Scientific and Cultural Organization) - a branch of the United Nations, works for the preservation of historical heritage and natural sites around the world. The organization consists of 193 members of countries. The list of heritage proposed for recognition before the UNESCO committee currently includes Vishnupur Temple in West Bengal and Mattancherry Palace in Kochi Kerala.

Process of joining the world heritage

A country must first make a list of its important cultural and natural heritage. This is called a trial list. An asset from this list is selected and inserted into the nomination file. The World Heritage Center advises and helps in making this file. The file is reviewed by the International Monuments and Sites Council and the World Conservation Union. These institutions then make recommendations to the World Heritage Committee. The committee meets once a year. It is the committee that decides whether to include the proposed property in the World Heritage List.

37 heritage of India is recorded in UNESCO

37 heritage of India is listed in UNESCO list which has 30 cultural heritages and seven natural. Nanda Devi Peak from Uttarakhand was listed in 1988 and Valley of Flowers in 2005. Last year i.e. 2019, Rajasthan's Pink City Jaipur was listed.

These celebrities have come to see Jim Corbett National Park