Uttarkashi Travel GuideUttarkashi TripsRendezvous With Mountains At Nehru Institute Of Mountaineering - Experiences And Much More!

Rendezvous With Mountains At Nehru Institute Of Mountaineering - Experiences and much more! 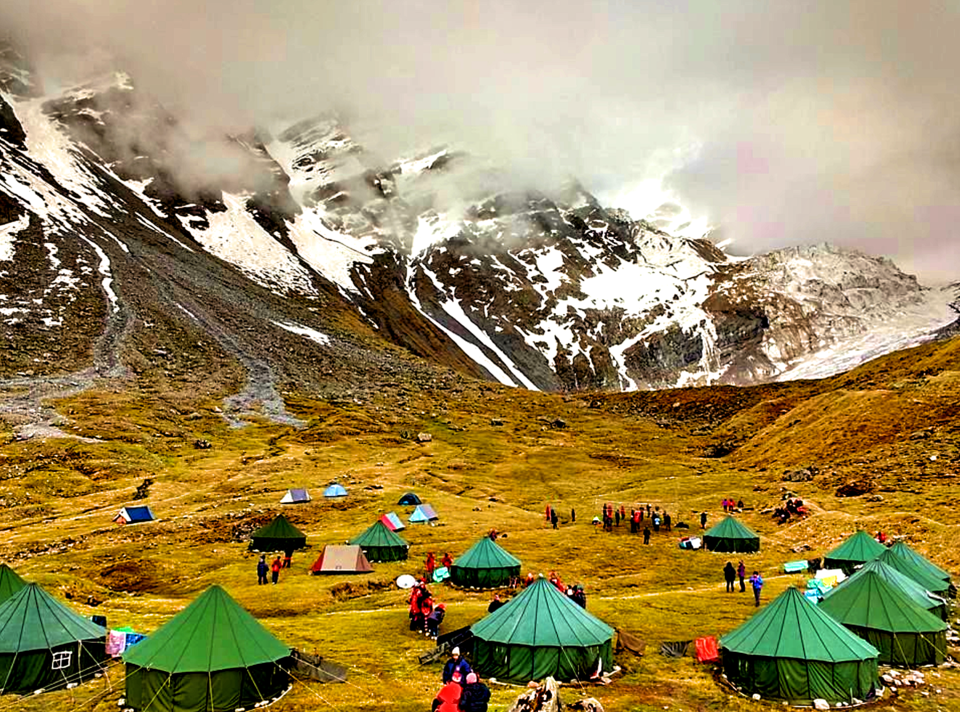 It was during one of the treks that I came to know about “a mountaineering course”. One of the guides had done some courses from NIM. I then researched about the same and felt a strong urge to go for it. I had read blogs and knew that this can get extremely tough. Nevertheless, that strong desire propelled me to continue. So, I applied in Mar’15 only to get a seat next year in the May batch. It was scheduled to start from 27th May’16 and continue till 23rd June'16. The course fee was Rs.5700 at that time for Indian Nationals. For foreigners, it was much higher.

So, the training began which included equal focus on stamina and strength (both upper and lower body strength). It’s always suggested to practice walking carrying 15kg load because this is what a trainee does the most throughout the training. Finally, the D-day arrived when I had to leave for the course. My parents were initially sceptical but finally agreed to it as always :P. So, I landed in the quaint town of Uttarkashi on 26th May’16. The first thing that one notices after entering the campus is the quote “ Success lies in courage” written almost everywhere. It sends a sharp chill through your bones! It is indeed correct as one realises it everyday while going through the course!

So, first day is sort of chilled out as you just chit chat with others. There were 108 girls in total. The whole course was divided in three parts viz., rock craft which happens in Tekhla, ice and snow craft which happens in higher camps at an altitude of roughly 11200 ft and 13200 ft respectively. Initially the entire group is divided into ropes of 6 or 7 girls with one of them selected as rope leader. Each person has to serve as rope leader for 4 days and then transfer the baton to the next girl and this continues till the end. The basic purpose of this practice is to develop leadership skills. On 27th, we had light training routine which included 4km run (2km ascend and 2km descend) with little warm up exercises. This continued till the rock craft training started. We were issued technical equipments from the institute itself and had to undergo a medical check-up again. We were trained to do climbing first on artificial walls. NIM boasts of state-of-the-art climbing walls! Rock craft started from 30th May’16. So, the general routine looks like following during rock craft which includes getting technical climbing training on rock viz., rappelling, bouldering, rock climbing, knots practice, chimney climbing, belaying etc. :

2. Breakfast call at 7am

3. Departure for Tekhla training camp from NIM campus at 7:30 am carrying 15 kg rucksack and it turns to 18kg if you are carrying rope. Every group(i.e rope) is provided with two ropes of ~3-4 kgs each and two of the rope mates out of 6-7 has to carry it in turns. This trek is mainly on roads and the last stretch is on hill. Entire duration is 2.5 hrs.

7. Reach campus by 2:30 pm. The happiest time is now :D, yes!! The lunch time :’) U feel like pampering yourself with food to the core at this point!Sigh!!

9. Classes at 5 or 6pm for one hour duration. This is basically on the technical stuff you are going to practice the next day.

11. 8-9 pm is the movie time. These are on mountaineering. We watched Vertical here :D 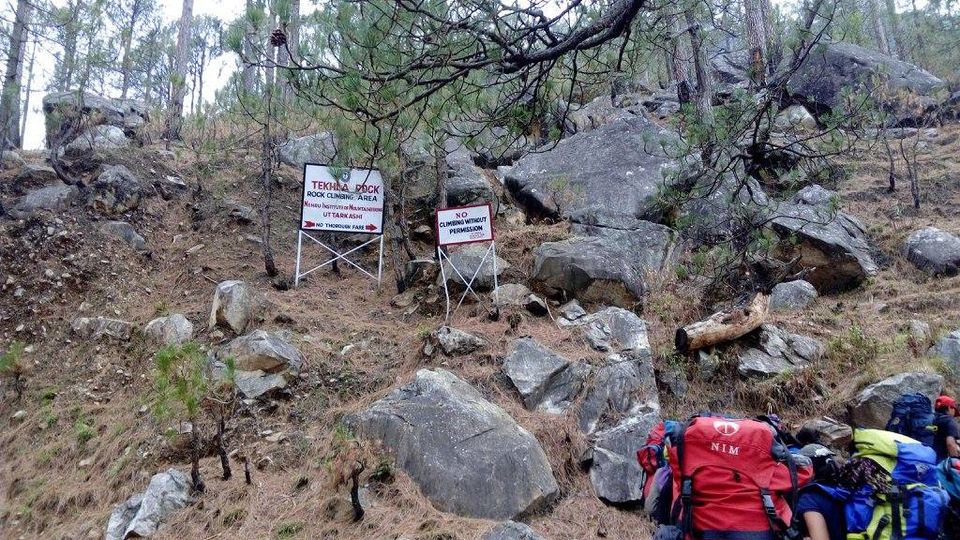 Next is the snow and ice craft. Snow craft depends on availability of snow and ‘May' batch generally learn more of ice craft compared to snow craft. For our batch, we had almost 8-9 days of ice craft and only one for snow craft. After 4-5 days in rock craft, one leaves for base camp for ice-craft training at 11200 ft. We halted at two intermediate camps before we finally reached the base camp. These are “Jungle camp” and “Tel camp”. Going from NIM campus to Tel camp literally yields all the “tel” from u :P :P It’s of 5 hrs duration and is a steep climb carrying 15kg load. It’s fun and give you loads of confidence once you reach the base camp. It’s simply amazing to witness the great arrangements NIM had done at base camp. One get amazing food(which includes great delicacies like kheer, jalebi, custard etc.) at such an altitude as well! The routine here also remains more or less the same with the following differences:

1. Since this camp is in mountains there is no bus while returning back to the base camp from ice-craft training area (unlike Tekhla where bus takes up to NIM campus post training) which adds extra 2.5 hrs to the whole schedule as you return back also by trekking. Ultimately, the lunch here happens at 3:30-4pm followed by tea. You eat like a voracious lion here (seriously!)!!

3. Lights off at 9:30pm (though u can sneak out at times to see the beautiful stars :’). Yes.! There were so many because of almost no light pollution!) 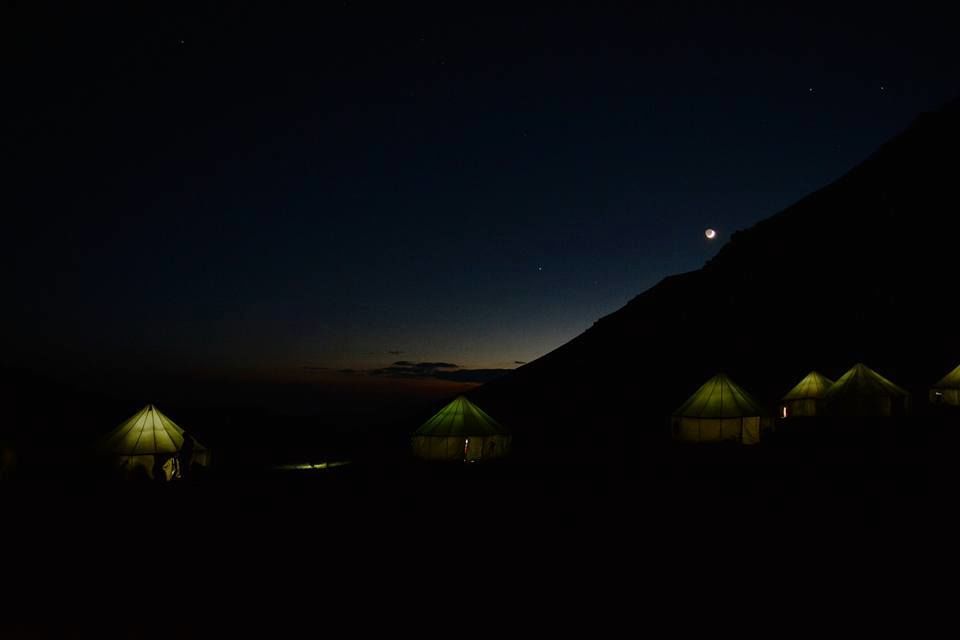 For snow craft, we then move to advance base camp at an altitude of 13200 ft. 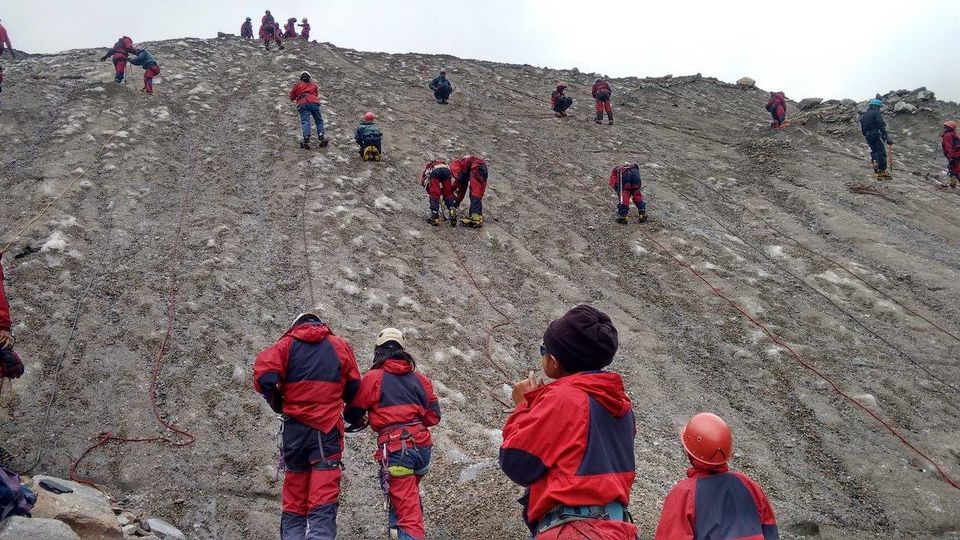 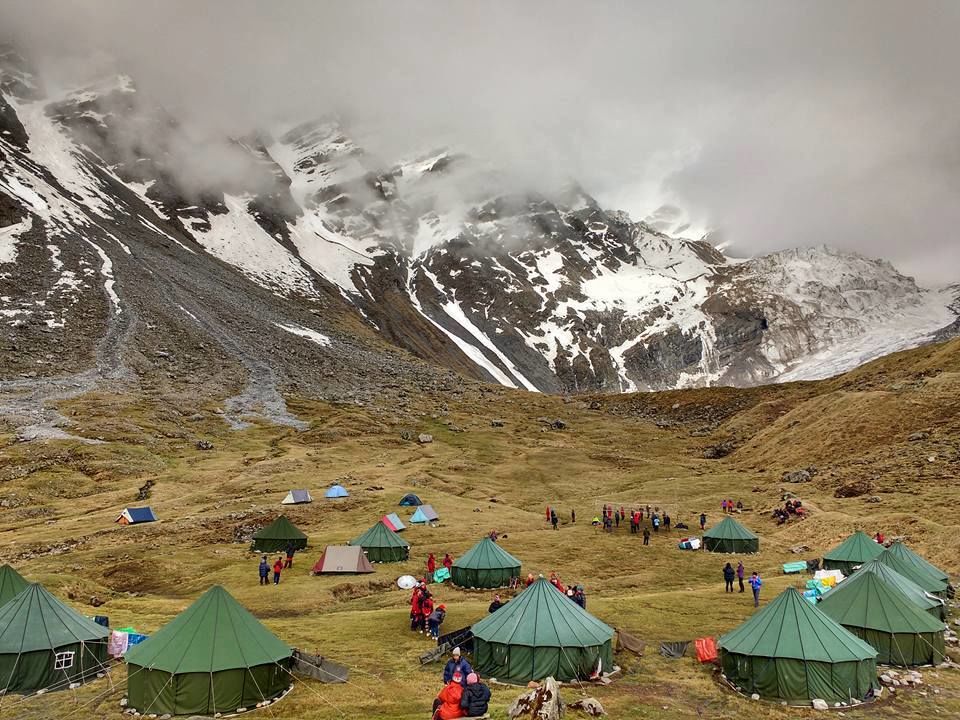 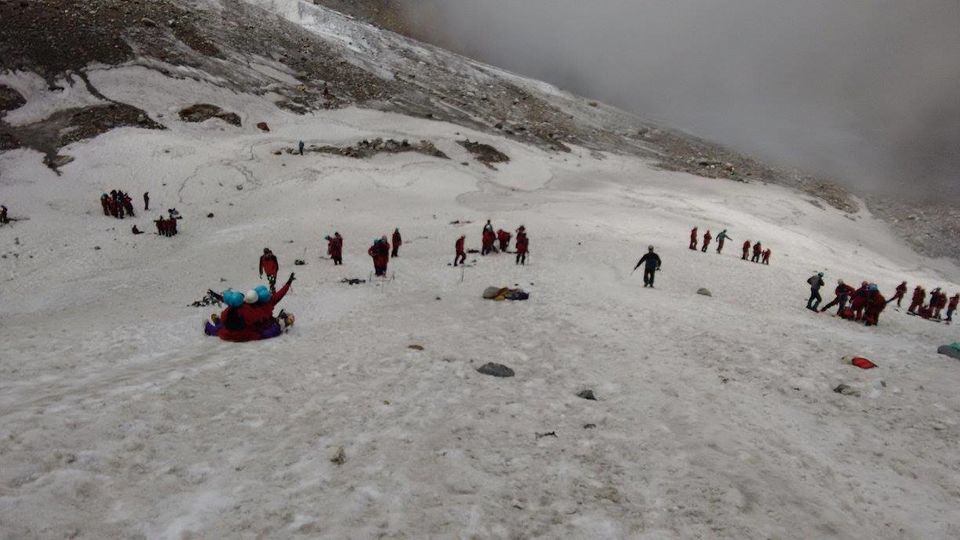 As part of the course, we had to do trekking on snow capped mountains to reach a height of 15600 ft. This starts from advance base camp. While trekking, we use the techniques of snow walking that we had learnt. It’s very different from normal trekking as one has to trek wearing 4kg shoes and crampons and carry an ice-axe. It’s rather difficult and at times becomes too much but everything is worth once you reach the top :P :P This marks end of the course. 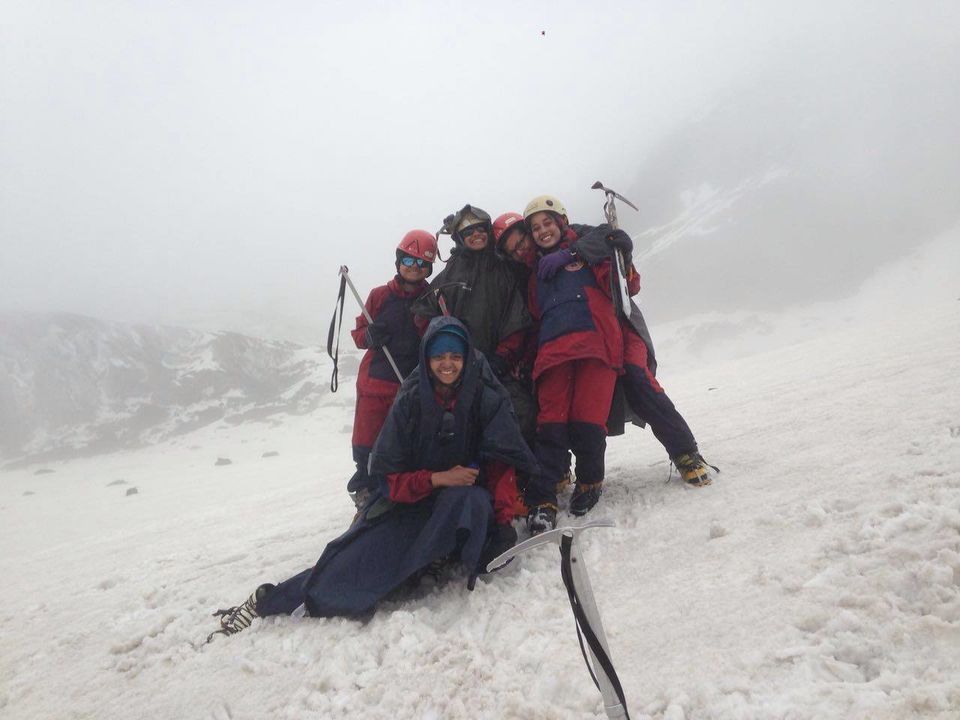 From here, we descend back to NIM via base camp, tel camp, jungle camp and finally NIM campus.

An amazing passing out ceremony is organised where everybody who completes the course is awarded a badge. 92 out of 108 girls were able to complete the course from our batch.

It’s something that nobody can regret about. All the instructors are very nice and they always motivate to do better. There are instructors who had successfully summited Everest :D :) At the end, one learns ones dormant strength which transforms you to a much stronger person both physically and mentally! All the best if you are planning to go for the course!